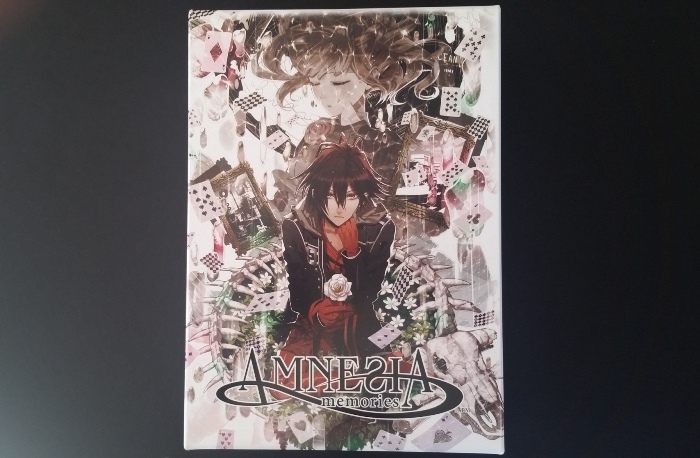 Amnesia: Memories is quite the visual novel. This otome-focused title centers around the life of a protagonist as she awakes one day devoid of her memories. With amnesia removing her ties to reality, she must go forth and experience life with one of five male suitors, potentially falling in love with them all over again. Despite some oddness, the game is overall worthy of quite a bit of praise and is a must-play by fans of the genre on Steam or PS Vita. If you’re already a fan, though, then hopefully you’re aware of a special limited edition which Idea Factory International crafted for Amnesia: Memories’ western launch.

The limited edition actually comes in two variations. The first, known simply as the Amnesia: Memories Limited Edition, includes everything you’ll see below along with a redeemable Steam key. As someone who already nabbed a digital copy, I wasn’t in need of a $70 limited edition. Amazingly, Idea Factory decided to also produce the Amnesia: Memories Remnants of Love Keepsake Box alongside it. This edition is nearly the same but does not include a Steam key voucher (and is $30 cheaper). It’s an odd distinction at first blush, but makes sense when you consider Vita fans probably wouldn’t want to spend extra on a PC code. So, enough about the slightly different editions, let’s dig right in! 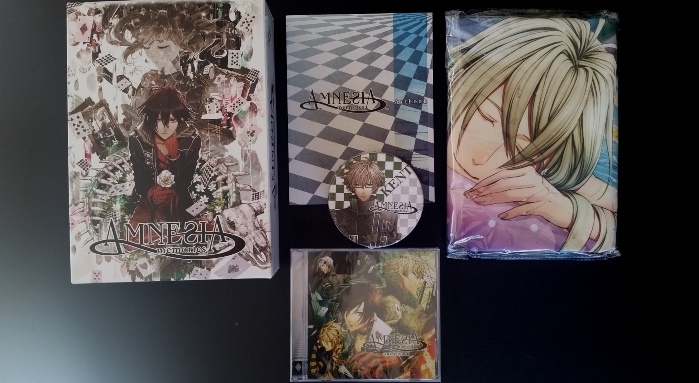 The Remnants of Love Keepsake Box is absolutely gorgeous. The outside features that divine promotional art of Shin and has a nice sheen to it. Once open, it’s quickly revealed that this physical edition had a lot of thought put into it. Unlike many special editions I’ve picked up in the past, this one ensures that each item is packed separately and sturdily between removable cardboard pieces. Packaging like this ensures that no item gets wedged or bent awkwardly while within the box. But enough of discussing how nice the actual casing is, as what really matters here are the goodies packed inside. Don’t worry, there’s quite a bit to be excited about.

Included are some fairly expected items such as an artbook and soundtrack CD. However, some of the more unusual additions include coasters and a pillow case. Of everything, the artbook feels like the biggest let down. It’s pretty small at 7” x 5.5” and doesn’t even feature that cheap-style hardback that some other game publishers have utilized for their artbook bonuses. There are 52 pages of promotional art, character sprites, and the like, but only the first few pages are even in color. It seems that a lot was done to keep the expenses down as much as possible with this item. As for the soundtrack CD, it’s about par for the course with game pack-ins. The jewel case is serviceable but track listings are nowhere to be found. In any case, there’s about 70 minutes of songs to listen to.

Coasters are a collectible that I don’t think has appeared in a limited edition prior to the Remnants of Love Keepsake Box. There are five in total to ensure that Ikki, Kent, Shin, Toma and Ukyo all get their chance at collecting moisture from the bottom of drinks. Personally, they’re too cute to ever get used as coasters, but they’re the real deal with corkboard underneath the image and everything. Finally, there’s the pillow cover which is a bonus making its way into more Japanese titles’ North American releases these days. Even so, many of the pillowcases we get are small to fit on a standard size pillow. That’s not the case here! Amnesia: Memories has a pillowcase that is 47” x 20” which requires a long body pillow. The 100% polyester cover also happens to be adorned with an adorable image of the guys playing in a pool, so it’s definitely worth buying a new pillow for.

All in all, Amnesia: Memories Remnants of Love Keepsake Box is a phenomenal addition to the collection of otome fans out there. Although the artbook leaves a surprising lot to be desired, the production level of items such as the pillow cover and (weirdly enough) coasters seem to far exceed that. Of course, the box itself is handsome enough to display proudly on a bookshelf. If you don’t yet own the game and wish to go all in, then it may be wise to nab the Limited Edition with Steam code. Those who already own the game or simply want to support otome games in the west can save some bucks with the Remnants of Love Keepsake Box.