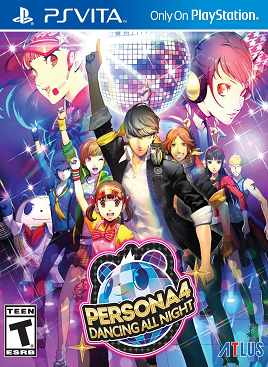 Despite having an incredibly long and drawn out campaign, many players (myself included) simply could not get enough of the story and characters in Persona 4. The conclusion was satisfying, but it left a feeling of wanting to spend more time in the world, exploring the many facets of the character’s hidden emotions, or just sitting back and watching the Investigation Team stupid themselves into amusing situations. The “King’s Game” sequence is among the funniest ever to be included in a game, partially due to the well detailed personalities of the players. Fortunately, Atlus knows how to capitalize on what they have while adding fulfilling experiences. Working with Arc System Works yielded two stellar fighting games with the Persona Arena series that served as a fantastic continuation of the RPG. We were also treated to a Persona 3 and 4 X Etrian Odyssey dungeon crawling romp in Persona Q: Shadow of the Labyrinth that still manages to chew up time. Still, that is not enough to sate the hunger of the fans. Fortunately, Atlus continues the streak of excellent spin offs with Persona 4: Dancing All Night.

The approximately twenty hour story mode takes place back in the big city, just before pop idol Rise’s comeback show. This show is to take place at the Love Meets Bonds festival that also features Kanamin Kitchen, an idol group that took Rise’s place while she was on hiatus. As part of the show, Rise has tapped the Investigation Team to perform as her dancers, as a show of friendship and to showcase her personal bonds. As they practice, rumors begin to fly. The majority of Kanamin Kitchen has gone missing, and there is a strange video that shows on the festival’s website at midnight. When checking out the video, Rise, Yu (the protagonist from the original), and Naoto get pulled into a version of the Shadow World. This world is different than the TV world from the original. Violence does not work here. The only way to defeat the shadows and keep from becoming stuck in this world is for the heroes to express their true self, which takes the form of dancing.

As goofy as it sounds to explain the plot, the writers at Altus have managed to make it work perfectly naturally in the confines of the Persona universe. While not having the complete details about the creation of this game, it would be easy to surmise that the concept of a rhythm game set around the music of Persona 4 came first, and how it fit into the story was later. It does not show through, though. The plot begins as a slow burn, in typical Persona and Shin Megami Tensei fashion. After a bit, it builds up steam, leading to entertaining confrontation to confrontation, steadily feeding new twists and threads to the overarching whole. Despite the initially silly concept for story and gameplay, this feels like a true entry in every sense. 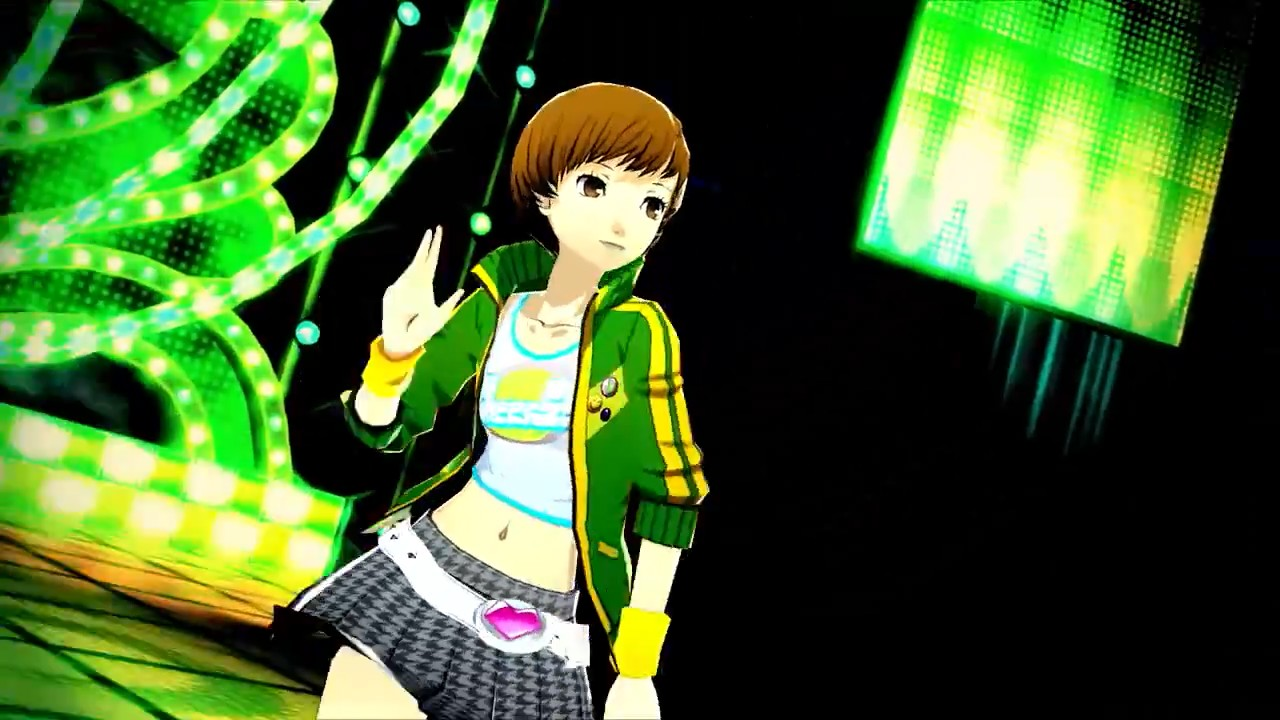 The adventure is bolstered by the continued excellent dialogue and characterization. Yosuke is still the slightly creepy loser that he has always been. Kanji, while still behaving like the street tough he believes he is supposed to be, has seen some personal growth. Naoto is still in the process of opening herself up to the world. And then there is Chie. Chie is just the best. Anyone who says otherwise is lying to others or themselves. Frankly, due to her well crafted cartoon-like, yet relatable personality, Chie should just be in everything. Halo’s protagonist should be Master Chie, a martial arts fanatic that was chosen and trained from a young age to be the best of the best. Heck, they could even add a Shadow World type element of allowing Chie to explore Cortana’s computer world, making the hero/artificial intelligence relationship much less creepy. Metal Gear Solid needs to have Solid Satonaka. Of course, then the entire series could have been solved by Ocelot taking her to dinner at Fogo de Chao and explaining everything. Maybe that isn’t the best idea after all. However, if Atlus licensed the character to Joseph Enterprises to make a Chie Pet, the universe would be complete.

As fantastic as the plot is, its length can lead to large spaces between the actual action of the game, the dancing portions.This primary component was also expertly crafted. The goal is to hit the note indicators in rhythm to the beat. The indicators originate from the middle of the screen and travel outwards to the ring that indicates when the corresponding button should be pressed, similar to the Hatsune Miku titles. This one does it better, though. Whereas all the background “noise” of the animation on an average Miku track can make seeing the notes difficult when things get chaotic, Dancing All Night renders that issue obsolete. The background animations are still well animated and interesting to watch. They just don’t detract from the actual gameplay the way its contemporary can. The controls are quite simple, with inputs being regulated to the down, left , and up arrows on the control cross and the triangle, circle, and X buttons on the right side. The simplified controls allow the gameplay to focus on hitting the beat, as opposed to requiring feats of dexterity. A fever meter is also charged by hitting either analog stick at the correct time, for the potential of racking up even more points. 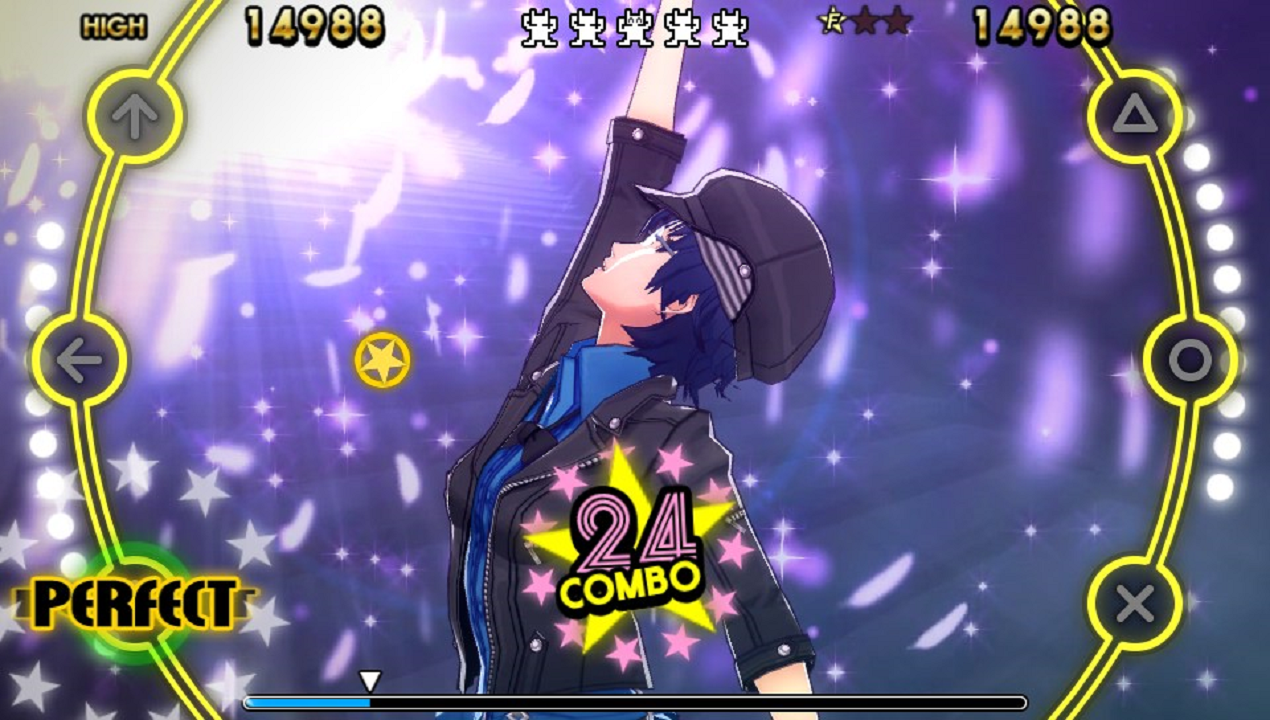 To get over the downtime between playable dance portions, there is a Free Dance mode. It would be more noticible if this mode was not included, but it still serves to help the player get the best of everything. A typical play session can be to play a chapter or two of story, and then jump into free dance mode to get a good fix there. Just about all of the tracks can be unlocked playing just this mode. This is also where the unlockable alternate costumes and accessories can be used. Most of these serve fans well, with a multitude of outfits from the older titles making their way here in addition to some…fan service.

The music is also superlative. Featuring the original versions as well as remixes of the best tracks from Persona 4, just about every track has some value. The eclectic mix means that even the most stubborn of music lovers can find something to latch on to. The mixture of pop, electronic, rock, metal, jazz, and the fusion of said styles created some of the most memorable music in the original RPG, and it all carries over here. In the huge list of tracks to play, there was only one that wasn’t so great. The full length Junes theme is just a little too cutesy-poo when standing alongside the rest of the featured music. Its inclusion certainly makes perfect sense, it is just the one dud in an otherwise outstanding assortment. 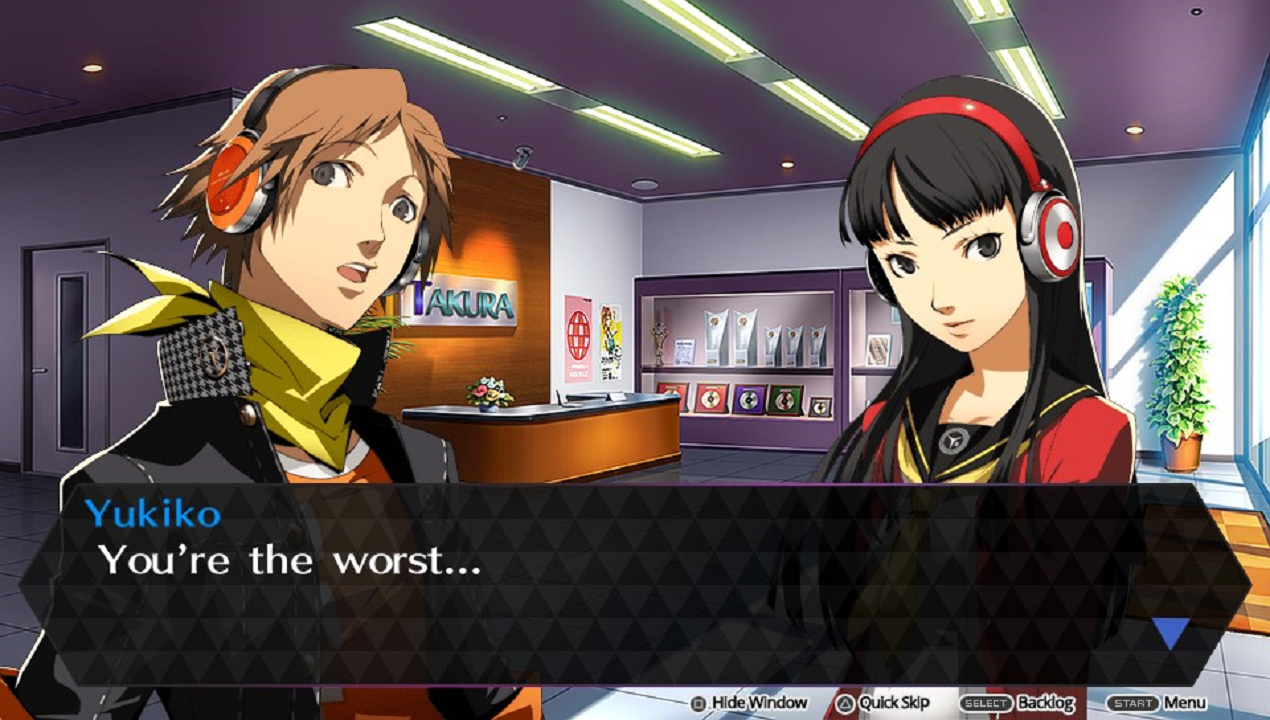 Persona 4: Dancing All Night has managed to surpass all expectations in what it set out to do. This love letter to Persona 4’s music and fans hits every single note. It stands as an easy recommendation to series adherents and rhythm action fanatics alike; it also serves as a great entry point for those wary of the genre. It is easy to get into and very difficult to put down and the value of the money spent versus entertainment quotient is also quite high. Personally speaking, I have lost count of how many hours I have already poured into this one and I still haven’t seen everything it has to offer. Factor that into the metagame of trying to top high scores and mastering the tracks on the unlockable hardest difficulty, All Night, and the gameplay is near infinite. Anyone with a Vita should absolutely add this to their collection. After all, every day’s great when you’re Dancing All Night.