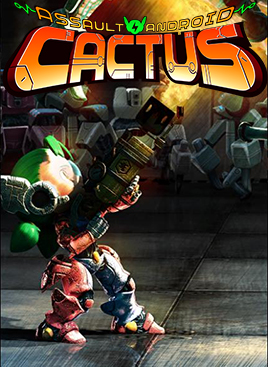 Cactus is a straightforward assault android.  It’s all there in her title — Assault Android Cactus.  She’s an android, her name is Cactus, and her primary function is assault.  Put a problem in front of her and odds are fair to excellent that something is going to go boom.  The thing that’s gone wrong this time is a space freighter that’s let out a distress call, but when she arrives the supposedly-unarmed ship lets loose with a barrage of laser fire.  Once she’s broken into the ship Cactus learns the central AI has gone strange in the head and attacked everything, leaving only a few autonomous assault androids standing.  On the one hand there’s a three kilometer long ship filled with thousands worker bots re-purposed into killing machines and overseen by five massive region bosses.  On the other hand, however, Cactus has backup and it’s a lovely day to go for a stroll with new friends and their unique weaponry.

Assault Android Cactus is a twin-stick shooter about mowing down countless waves of robotic aggressors while keeping the kill-combo high and trying not to get knocked down.  Androids don’t have health but they do have a battery, so you can take as many hits as you’d like as long as your power supply doesn’t run out.  Run, gun, and break out the heavy weaponry as often as possible and you’ll get to the end of the level, but pulling in a good grade will take an extra layer of skill.  Survival may not be easy but it’s well within the realm of possibility, but attaining an S rank requires choosing the right android for the job and knowing the level inside and out.

At game start there are five characters to choose from, all female-shaped androids but without a single gratuitous T&A design.  These characters are built to gun down massive enemy hordes, and they’ve got the armor to show they mean business despite the cuteness in their facial design.  Each character has a unique weapon style, ranging from Cactus’ machine gun, Holly’s seekers, Lemon’s spread gun, and Coral’s shotgun, to trickier armaments like Shiitake’s rail gun and Aubergine’s flying slicer-drone.  Additionally, everyone comes with a second weapon that’s more limited in use but can still be fired off every few seconds, with abilities ranging from flame thrower to a few types of missile to a lunging drill attack.  The loadout is specific to each character, no mixing and matching, and they’re balanced well enough that even if you have a specific favorite it’s not too hard to be proficient with a couple of backup characters as the situation demands. 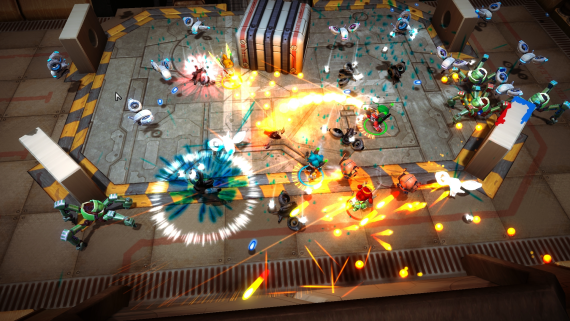 Coral, for example, has a shotgun, which has a great spread and does plenty of damage but simply isn’t suited for the long-range tactics you’ll want to use on most bosses.  Starch’s laser, on the other hand, combines with her homing missile barrage to be highly effective not only against bosses but also in the more open arenas.  Get a few walls popping up and a spinning floor activated and Peanut’s magma gun is the way to go, packing a lot of power in its limited (but still generous) range, making it great for dodging in and out of corridors that hadn’t been part of the floor plan a second ago.  The main enemy may be the robots but the level isn’t your friend either.

Nice as guns are, the second most important thing in any shooter is mobility, and Assault Android Cactus becomes every bit as much about movement as shooting.  Walls pop up and levels rearrange themselves, floors drop out and reconfigure the terrain, and sometimes both floors and walls start rotating.  It’s not just a constant attack of enemies and firepower but also restrictions on movement, all of which you have to react to on the fly.  Probably my least favorite enemy in the game, however, is the little blue rover-bots, who do no damage at all but tether you in place with an electric arc.  When a dozen spiderbots, a walking tank, and a few flies are all homing in, the last thing you want is to think you’re maneuvering away only to find yourself rooted to the floor.  It’s honestly unpleasant when it happens. 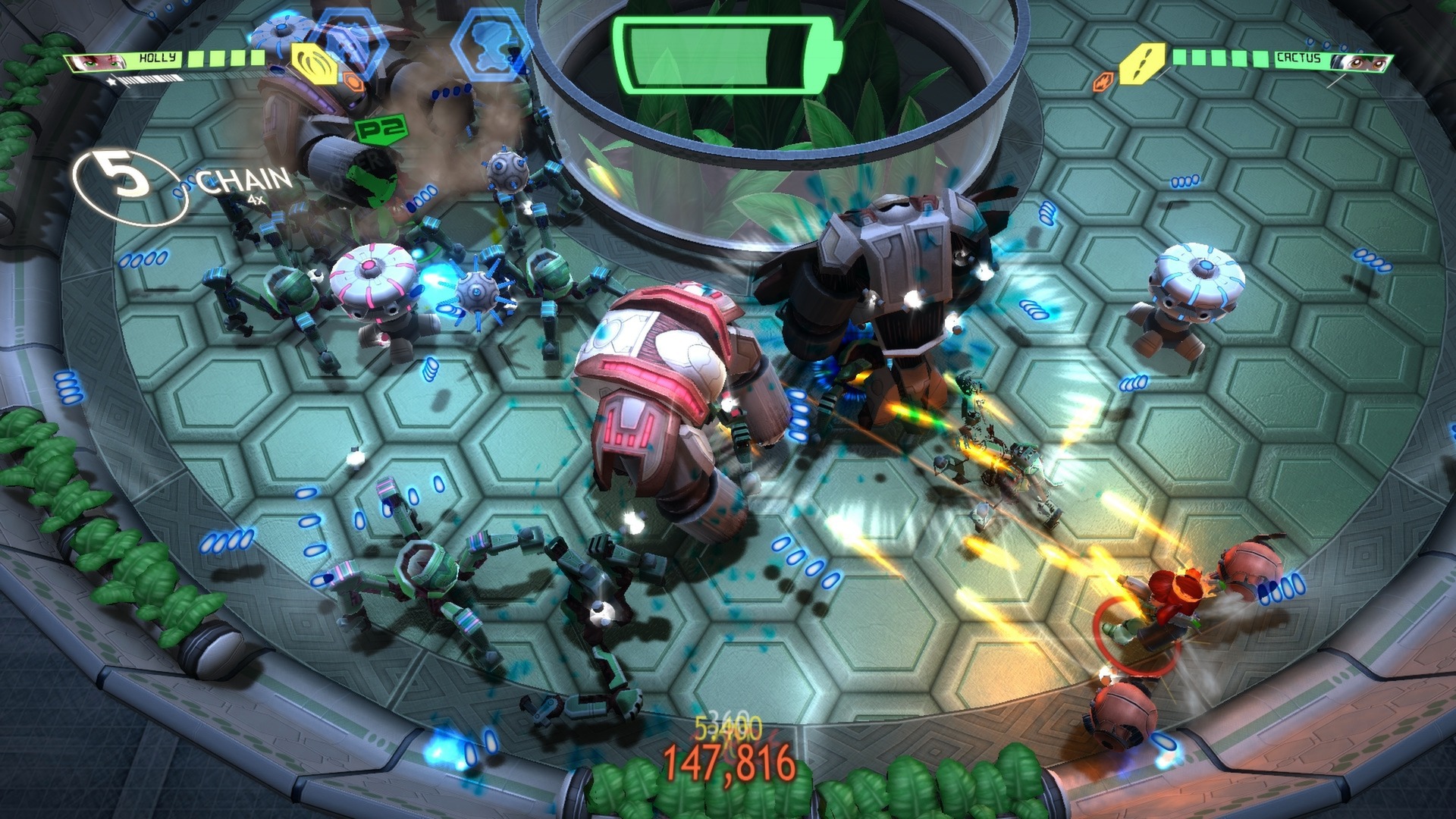 Once you’ve blasted through the story mode, there are still a number of other options open to play with.  Each beaten level earns currency you can use to unlock features ranging from FPS mode, lens flare graphics for that Star Trek look, and even a normal head model.  Personally I turned that one on the second I got it, because the freaky-large heads are just a little on the side of Wrong, while the normal ones actually look quite nice.  There’s also a large art gallery showing off character art, production designs, and guest artist pictures.  On the gameplay side of things, though, there’s Infinite Drive, which is a neverending level, plus Daily Drive, which is a set challenge score-run.  There’s a lot of shooting in Assault Android Cactus, and every level and mode is its own unique challenge.

Because of this, each level and mode also has its own unique scoreboard to go with it, and here’s where things start getting competitive.  You can go through the whole game just to see the story, which has a fun intro and ending movie, but the replayability comes from bettering the score ranking and leaderboard position.  Each time you take a hit you lose score, and it doesn’t take more than one or two knockdowns to see a potential S rank slip to a C.  Assault Android Cactus is an unforgiving taskmaster, and it while it won’t punish your progress too much it will destroy your ranking without a second thought.  The best rank of S+ is a beast to earn, and in one particular replay I beat the spider-boss without taking a single hit and still only earned a D rank.  A careful replay showed some chaining opportunities that would amp the score enough to at least get it out of the basement, but at that point perfecting the fight and maxing every possible bit of scoring became work rather than play.  Thankfully, most S ranks simply require killing a whole lot of enemies really fast while avoiding damage, which feels like a much more worthwhile goal. 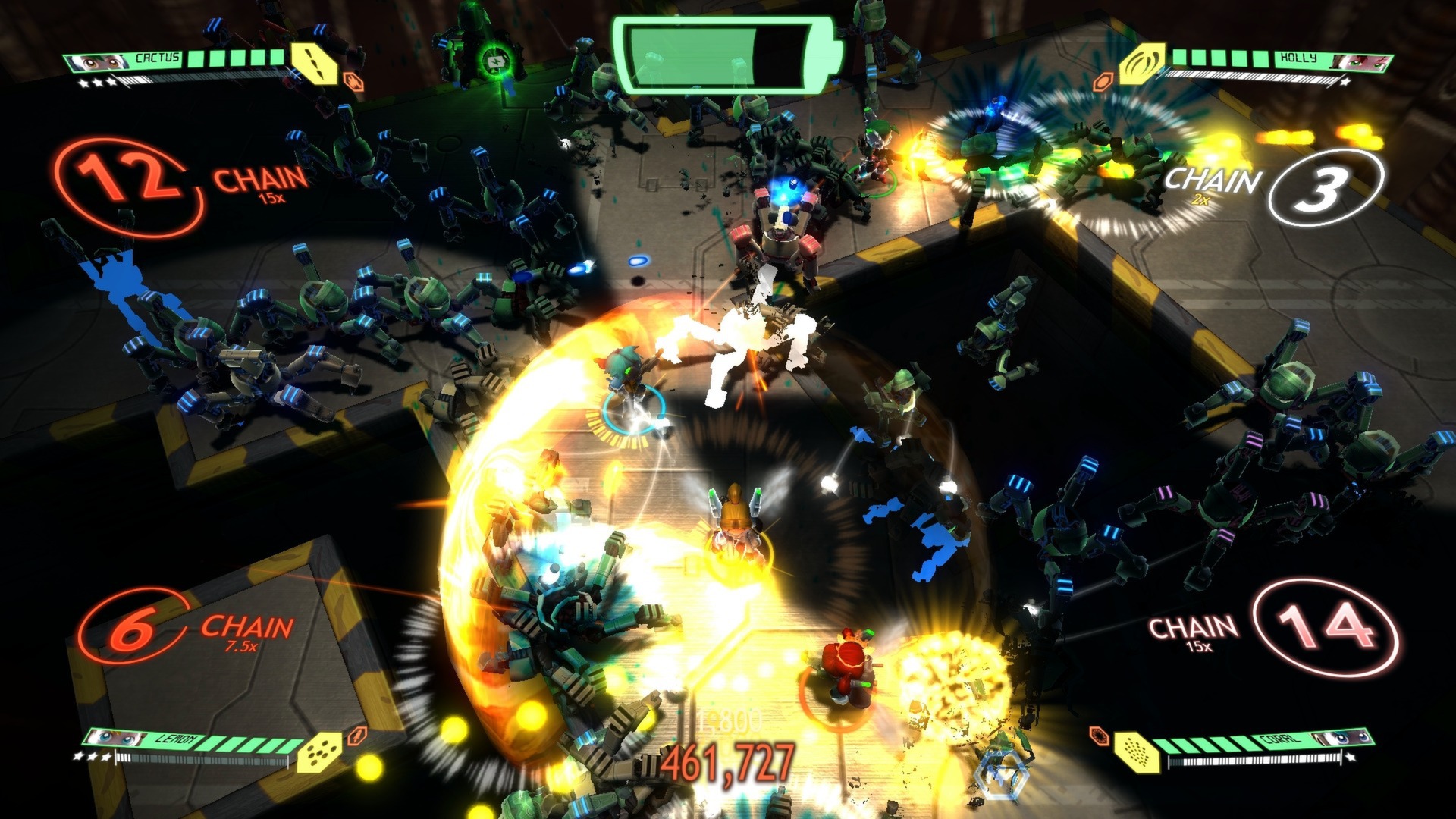 Assault Android Cactus is a solid twin-stick shooter with a focus on unique characters and level designs.  Each level has its own individual challenges, ranging from arenas with pop-up walls to corridors that drop the floor away as you travel.    The robots come with a good variety of attack patterns, and if there are a lot of popcorn enemies on screen it’s usually to mask the more powerful ones causing you real trouble.  The game can get a little technical in a few places, and not all of its experiments in limiting player movement work out as being fun, but it plays with level design in so many ways through its length that there were bound to be one or two that didn’t work out.  Assault Android Cactus is a big, bright, blast of twin-stick shooting action, filled with personality and clever design.