One of the biggest brands known to console gamers is Turtle Beach. Despite creating some of the more mainline products, Turtle Beach’s headsets still range from entry level to professional grade, allowing for all types of consumers to jump in. The latest pair of headphones to join the Turtle Beach catalogue is the Ear Force Stealth 450, a lightweight wireless gaming headset, capable of generating 7.1 DTS virtual surround sound. It helps that the device has all the bells and whistles the New York-based studio is known for, from voice-automated notifications to easily accessible controls. This bite-sized device is able to deliver the highest quality sound at a fraction of the price, although it comes at a price. This isn’t the perfect package you’d hope for, sacrificing comfort for quality.

For a wireless gaming headset that features 7.1 DTS virtual surround sound, the Stealth 450 sure is well priced. The device comes in at $129.95, a somewhat affordable price tag for those looking to get rid of wires in place of a simple dongle. The Stealth 450 contains a wireless transmitter that’s advertised to last 15 hours, although on our end, while we didn’t run into a single hitch with its functionality, it lasted just under that, between roughly 12-13 hours. Because the wireless dongle is USB-based, Turtle Beach has also included a 3.5mm stereo cable, and it’s quite possibly the best addition anyone could have asked for. This ensures that Stealth 450 is fully compatible with mobile device such as iPhones and Android phones, and even consoles that support the jack, such as a PlayStation 4. I do wish the connector on the headset was located on the left side, though. As someone who puts his phone in his left pocket, this becomes unusable for that function. It’s something that’s entirely a personal preference that depends on multitude of factors, but I do wish there was a way to include a jack on both sides of the headset to accommodate all users. 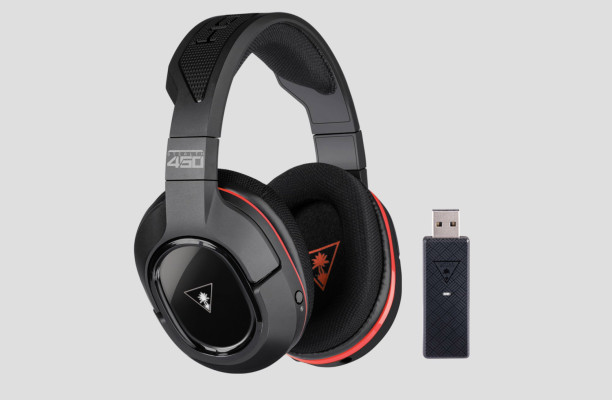 The biggest question is whether or not the Stealth 450 delivers in sound quality. Well it certainly does. Using this on a PC, PlayStation 4, Google Nexus 5 and iPhone 4, primarily playing games, listening to music and watching movies, this had crisp audio quality. We did notice a little bit more white noise on the Nexus 5 and PlayStation 4 over the other devices, but it’s mainly only noticeable when little to no audio is being transmitted and can’t be heard otherwise. The bass is also not as strong as it could be, although it’s more than adequate for what we’re getting. The Stealth 450 also has DTS 7.1 virtual surround sound, and while this is fine, like every headset that has this feature, it’s more of a gimmick than anything else. It always sounds like you’re in a tunnel whenever the surround sound is emulating, and it’s almost always better to stick with stereo. There’s also Turtle Beach’s trademark Superhuman Hearing addition, giving players the upper hand on their opponents during a game session by amplifying lower frequency sounds to stick out more. This works magically as you can tell the audio quality has been heightened to give players the advantage.

As for its design, the Stealth 450 features pretty much what you’ve come to expect from a modern headset. A fully adjustable padded headrest, padded ear cups, various switches on the sides, including mute and mixer control, and on the two earpieces are slightly lit up logos for Turtle Beach that act as the power button. The earphones can also be angled inwards and partially outwards, and while not the sturdiest of plastic, it comes with a solid frame that should be satisfactory to those who wear it, so long as you don’t abuse it too much. The best feature of the Stealth 450 is arguably the microphone. The microphone quality is actually above average, especially when you take in consideration its price, but that’s not its best part of it. Turtle Beach has included a fully flexible microphone, allowing users to bend it to whatever angle or design they please, having complete control. There isn’t a boom on the microphone itself, so be weary of clipping, but it works just fine if you angle it right. Overall, its design is well formed, and its small frame can look appealing, at least from the outset.

Unfortunately, despite having great audio quality and a sharp presentation, one of the biggest and most disappointing drawbacks to the Stealth 450 is its comfort. We recently looked at Corsair’s VOID headset and despite having connection issues, it was arguably the most comfortable pair of headphones we’ve ever used, containing plush, breathable microfiber ear cups that formed around your ears. While the Turtle Beach Stealth 450 has similar material, it is not at all comfortable. For one, the headset itself feels far too small. While it has a fully adjustable headband, it’s sturdy, small design will press against the heads of most users to a distressing degree. I have what people consider a normal sized head for a six foot man, and after roughly hour long usages, the Stealth 450 induced multiple headache. It’s clearly something aimed towards smaller individuals. The ear cushions aren’t great, either, containing stiff fiber that barely has any cushioning. When you put these on your head, you’ll wish for them to be off as soon as possible. On the positive side, this is quite possibly the lightest wireless headset we’ve tried, it’s just a shame it’s a literal pain to wear. 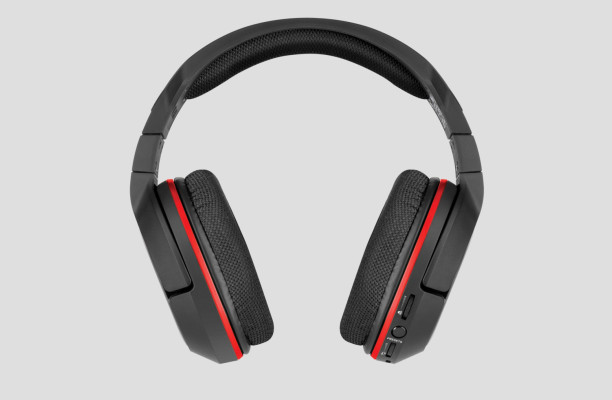 The Turtle Beach Ear Force Stealth 450 is a mixture of greatness and disappointment. On one hand, the audio quality is strong, despite experiencing prominent white noise on a number of devices. It’s also arguably the lightest wireless headset we’ve ever worn, but the problem comes in when you want it off your head immediately. The comfort level is determinate on the circumference of your head. For a six foot man such as myself who has said to have a regular sized head, the Stealth 450 did nothing but squeeze the living life out of my skull. It literally brought on numerous headaches after mere hour long sessions. It’s not to mention that the ear cup padding isn’t at all adequate, not being soft or breathable, but instead stiff and uncomfortable. It’s something that’s entirely designed for smaller individuals, so if you’re someone who doesn’t fall into this category, it might be best to look somewhere else.