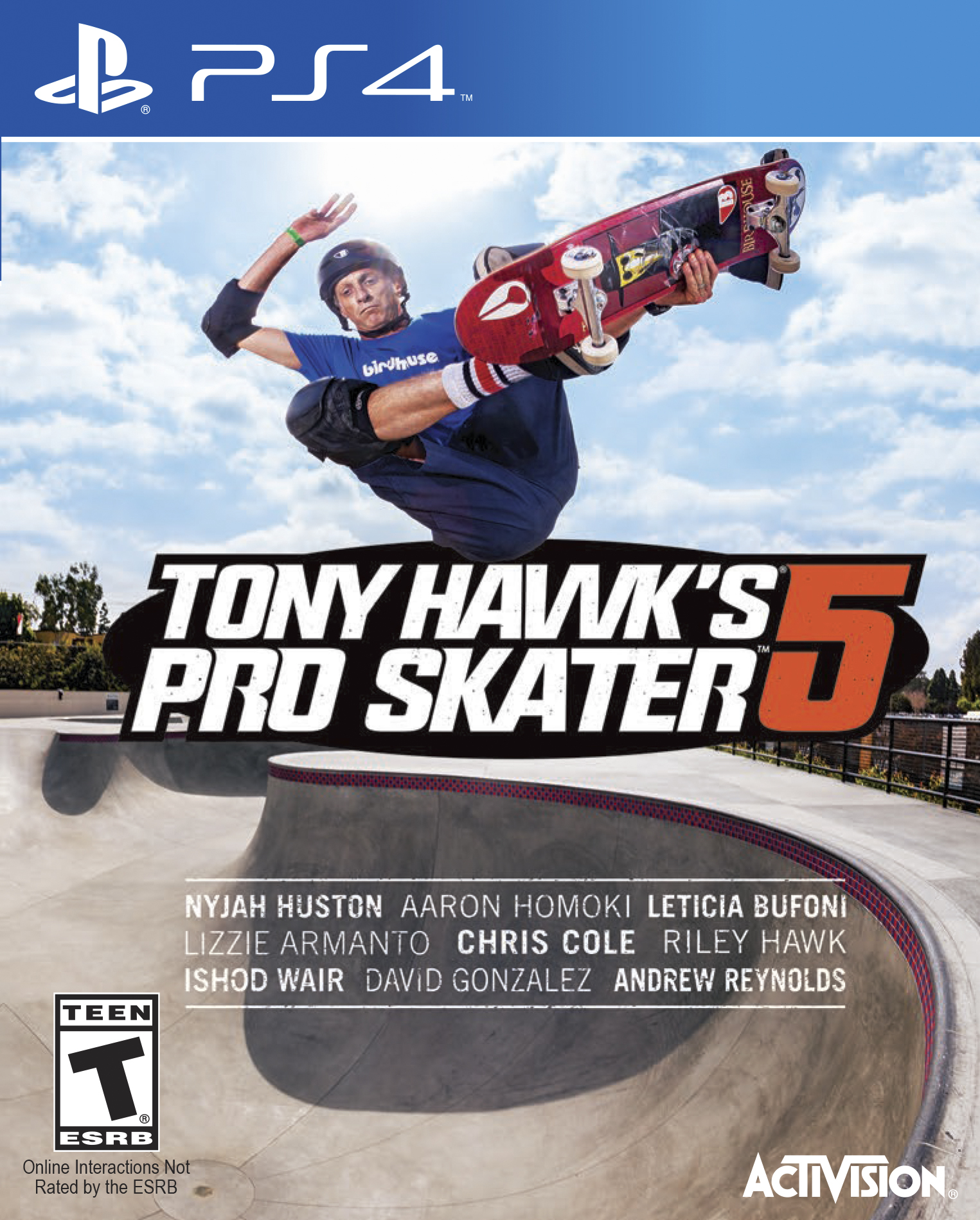 Tony Hawk was not only an inspirational skateboarding figure to the youth in the ’90s, but he inspired millions with his video games. Whether you weren’t capable of riding a skateboard or just didn’t want to learn, there was an option in the form of video games that allowed everyone and anyone around the world to shred like Tony Hawk. Since its debut in 1999, the Tony Hawk’s Pro Skater series grew exponentially, that’s until Neversoft was removed from the series. While you can argue that the downfall began with American Wasteland, it really wasn’t until Activision pushed the series onto Chicago-based studio Robomodo to try and innovate what Neversoft had started. This lead to some of the most gimmicky and outrageous attempts to bring the Guitar Hero formula to the franchise, getting unknowing parents to purchase an overly expensive top of a skateboard so their child could feel like they’re actually skateboarding. Even past Tony Hawk: RIDE and Shred, the HD remake of the first game was met with a tepid reception upon its release two years ago, although it was at least a step in the right direction. This brings us to 2015 where Robomodo has been given one more crack at the Pro Skater brand, hopefully setting themselves up for a new lineup of games. Unfortunately, Tony Hawk’s Pro Skater 5 misses the ramp and takes one hard face plant into the ground.

Mechanically speaking, THPS5 features similar skateboarding mechanics fans are used to, but there’s one new addition that will drastically change how the game is played, or at least paced. Players will be able to build up a combo score by getting some air and performing flips, grabs and grinds, along with manuals and reverts that were added in some of the older mainline titles. Unfortunately, Tony Hawk’s Pro Skater 5 isn’t the generation leap its predecessors were, with its “highlight” being the slam feature. This allows players to get from air to ground in no time, cutting milliseconds off airtime if they desperately need it. While that sounds great on paper, how it’s implemented isn’t particularly great. It’s now assigned to the triangle/Y button whilst in the air, making it hard for longtime fans to adjust. Previously, players could continuously hit the triangle button to lineup a grind, but now doing so will break up a combo if they’re not properly placed. It can be to the player’s benefit, basically realigning their center of gravity and flipping the skater back vertically before they face plant, but it’s nowhere near the revolution of reverts or manuals. 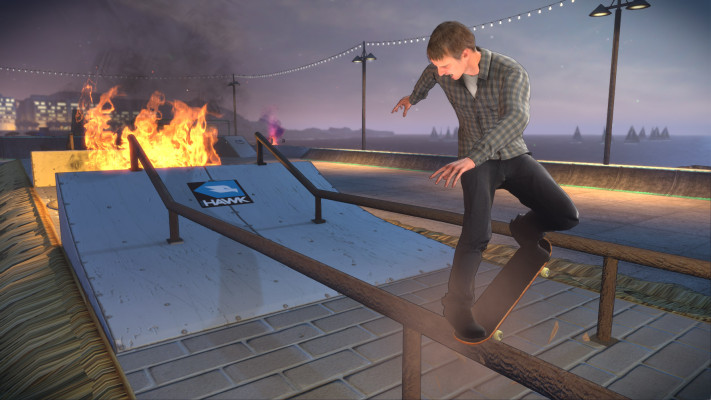 The worst part to THPS5 is its scale. It contains an online mode that’s supposed to be a giant hub for interactivity, but it’s more served as just watching random people skate around a level while achieving virtually nothing. It feels underdeveloped with little actual ability to interact with others; its only real purpose is to be a hub to start missions. There are essentially eight different levels to unlock through a non-existent campaign, and unfortunately most of them are uninteresting. There are a couple that have been reused from past games, or at least adjusted to look slightly different from their past iterations, but even the newer ones aren’t anything to be impressed with. They are surprisingly small, taking less than a minute to see everything the map has to offer, with few secrets to go around. If there’s one word to describe the levels here, it’s uninspired, with only two standing out, and even they are underdeveloped. It doesn’t help that Robomodo teases the player with levels having barriers that block the player from areas you’d think would be entirely accessible.

The missions are horrendously structured. Once the player selects the level they want, they will be taken into the Freeskate lobby in which they need to go into their menu to select a mission or mode. Missions are basically how new levels are unlocked and cash is earned for buying customizable goods. Modes, on the other hand, are the more competitive aspect, such as Deathmatch, Trick Attack and King of the Hill. The real crime here is that there isn’t a HORSE or Graffiti mode to speak of, two of the best modes in past Tony Hawk games. The problem is how segmented these missions are. Players will need to navigate menu after menu to get into one activity, and once they’re done, it takes an excessive amount of time just to get to another mission. It’s not a smooth process by any means, having to go back to the freeskate mode to do anything. At the very least there are a couple of interesting missions to be found, especially later on, but most of them are variations of an existing template. 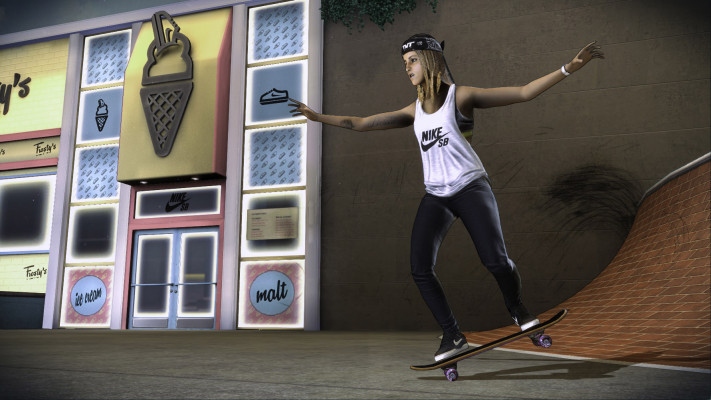 There are some RPG elements attached to the game, although they’re entirely determined on the skater rather than the player. So playing as one of the ten professional skaters, or using them as a template, and obtaining star points during missions will unlock attributes for them to increase their abilities. This means if you’re someone who prefers grinding over lip tricks, you can min-max that individual towards that specific branch. Unfortunately, how the customize options are handled is a bit disappointing, forcing the player all the way out to the main menu in order to apply skill points and change appearances. This just adds to the unnecessary menu system that should have been better streamlined. Ultimately, though, despite having an online portion, THPS5 feels light on content. If anything, Tony Hawk’s Pro Skater HD, a bite-sized digital-only title, feels larger than what is being offered here.

One of the most important aspects to the Tony Hawk series has always been the music. After all, just try putting on Goldfinger’s “Superman” or Primus’ “Jerry Was a Race Car Driver” without immediately having a wave of THPS nostalgia wash over you. Thankfully, Robomodo didn’t skimp when it came to curating this department as THPS5 is filled with more than thirty songs. While they don’t all represent the pinnacle of modern music, they’re solid representations of their genre and perfectly align with the punk feel of the series. Standouts include Ratatat’s “Cream on Chrome,” The Orwells “Who Needs You,” and Cold Cave’s “A Little Death to Laugh.” Most of these songs are exactly what you’d imagine a skateboarder would listen to in 2015 and with the exception of Skrillex, there’s refreshingly not a single top-10 artist to be found.

Visually, THPS5 is lacking in every sense of the word. The game just looks especially plain, with little to no liveliness going on in the background. Even when there are players in a lobby, there’s nothing particularly good to look at from a technical point of view. Artistically, it can range from vibrant with lots of colors, to utterly boring with lots of brown in specific missions. It amounts to an uneven experience that has no life, feeling all too sterile. Oddly enough, even though Robomodo used the Unreal Engine 3 to develop Pro Skater 5, an engine that could work on anything at this point, the game has a staggering amount of trouble keeping up. Although the world is filled with little detail in its models, for whatever reason, the frame rate will drop like a rock at random intervals, turning one’s impressions from a “not so great looking game” to cringing in disgust. It should be noted how unpolished THPS5 is overall. While it’s nowhere near broken, it contains more glitches than you’d hope for. The number of times we’d clipped through the environment or fall through the world reached a point where we lost count. There’s something to say for physics-breaking bugs – heck, Skate 3’s overly complex and somewhat unpolished mechanics have led to some hilarious videos – but THPS5 is just poorly optimized for an already last-generation looking game.

Tony Hawk’s Pro Skater 5 could have been so much more. There was some expectations early on that maybe it could live up to its name, especially with Activision slapping a number on the end for the first time in well over a decade. Regrettably, the result is a mess. While the mechanics are slightly unpolished, they still have a similar feel to what we’ve come to expect, which can result in some enjoyable antics. Unfortunately, they are contained in a constrained formula where the player must navigate menu after menu to get into repetitive and uninteresting missions. It doesn’t help that the online portion feels underdeveloped, not aiding the player in their search for shredding the streets with fellow skaters. The only positive notion about Tony Hawk’s Pro Skater 5 is that it isn’t offensively bad, and does contain a decent amount of options to choose from when it comes to customizing your skater, but that means playing through dull missions over and over again. It might be best to put ol’ Tony Hawk’s Pro Skater out to pasture. It’s best to remember what it was, rather than dwell on what it has become.