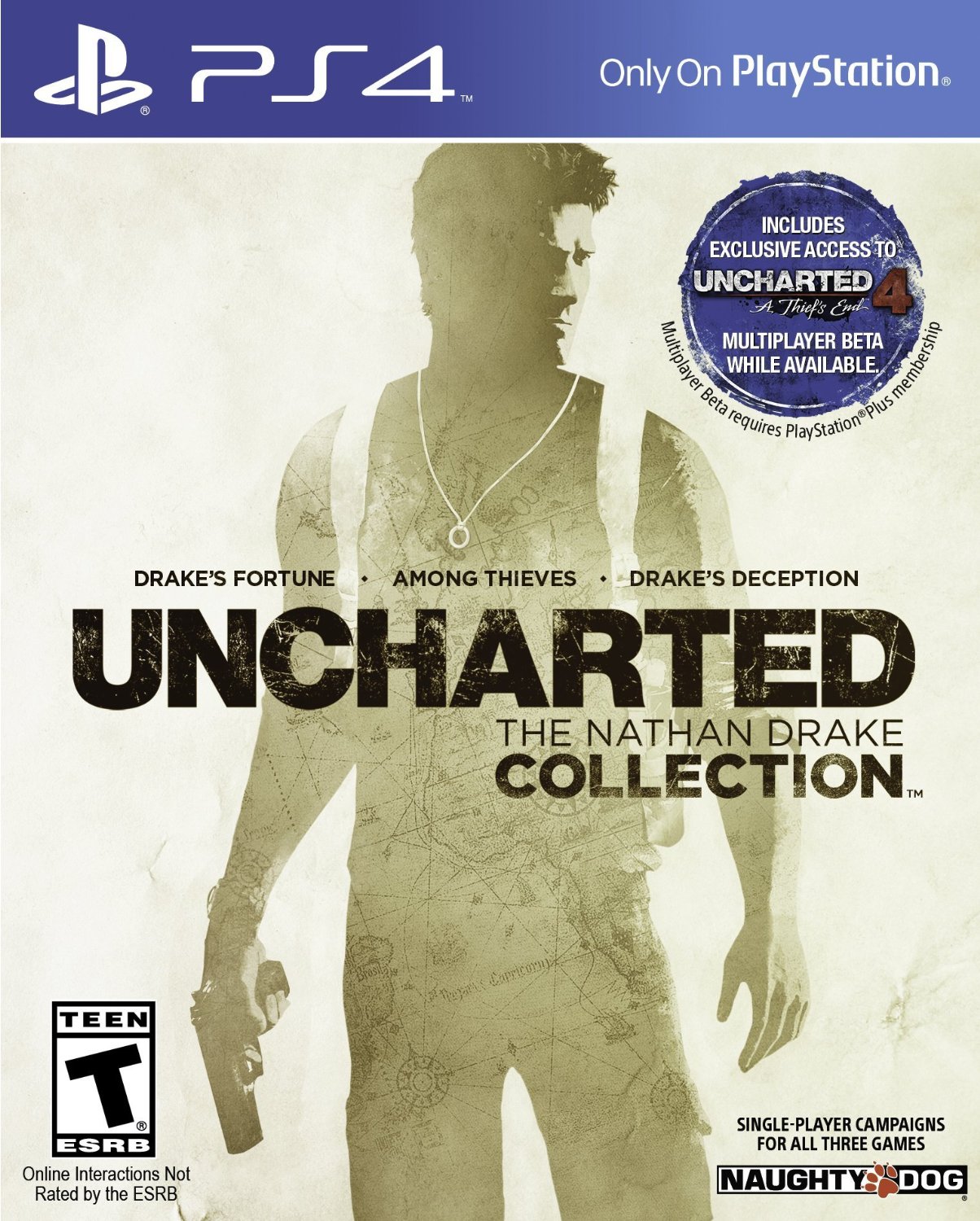 Nintendo has Mario, Microsoft has Master Chief and Sony has…a rotating cast of characters. Even though the PlayStation has been a classic since its debut twenty years ago, it’s never really seemed to have found a mascot that’s stuck. There’s been Sweet Tooth, PaRappa the Rapera, Jax, Ratchet, Sackboy and Kratos just to name a few, but none that have completely encapsulated the PlayStation brand. At least, not until Nathan Drake came along. Since the dashing adventurer’s debut eight years ago, he’s traversed his way into many a gamer’s heart to the extent that he’s likely now become the first character imagined when the word “PlayStation” is said. Celebrating his legacy and prepping a new generation of gamers for the upcoming Uncharted 4: A Thief’s End, Sony has bundled the first three games together and given them an HD makeover.

Uncharted: The Nathan Drake Collection includes all three PS3 games: Uncharted: Drake’s Fortune, Uncharted 2: Among Thieves and Uncharted 3: Drake’s Deception. Unlike, say, The Master Chief Collection, Sony has it a bit easier as they’re only having to jump a generation up. Even still, instead of recruiting Naughty Dog to polish the games — who are currently swamped with Uncharted 4 — they’ve brought in Bluepoint, who’s done a fantastic job porting PlayStation games including Metal Gear Solid HD collection, God of War Collection and The Ico & Shadow of the Colossus Collection. Suffice it to say, Drake is in safe hands.

Although anybody with a PlayStation 3 has likely already played these games (and shame on those who haven’t), let’s quickly go through what each has to offer. When Uncharted: Drake’s Fortune debuted in November 2007, it was a minor miracle. After the tepid launch titles anchored by the one bright spot in Resistance, Drake’s Fortune was the system’s first true killer app. There wasn’t anything revolutionary about it; it borrowed quite a bit of its gameplay from Tomb Raider and quite a bit of its vibe from Indiana Jones and Romancing the Stone, but what it did it did well. The shooting was tight, the platforming was solid, it was arguably the best looking console exclusive to that point and the story was charming. The plot revolves around Nathan Drake recovering the coffin of his ancestor Sir Francis Drake which points him to find the treasure of El Dorado. Unfortunately, Drake becomes stranded and hunted by mercenaries, trying to survive while he locates his treasure and unravels the secrets of the island. 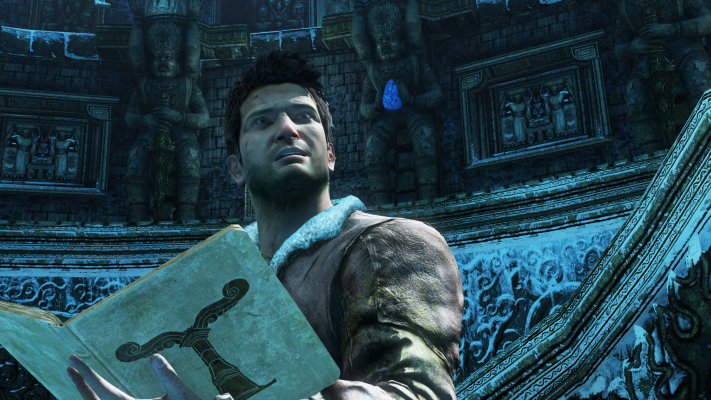 Avoiding the sophomore slump, Uncharted 2: Among Thieves was heralded as one of the best action games to that point. Like what The Dark Knight was to Batman Begins, Among Thieves keeps the vibe of Drake’s Fortune intact, but ratchets every part of it to 11. Besides an annoying and unnecessary stealth mission to kick things off, everything that follows is a heart-pounding tour through some of the best designed set pieces in gaming. The scale of the title is massive, seeing Drake head around the world as he runs away from barreling trucks, fighting through a speeding train and avoiding deadly helicopters. The plot sees returning favorites like Elena and Sully along with newcomers Harry and Chloe, as Nathan attempts to track down the Himalayan valley of Shambhala.

Influenced heavily by Lawrence of Arabia, Uncharted 3: Drake’s Deception sees our explorer foregoing the temples and jungles of old in favor of sprawling deserts. Searching for the Atlantis of the Sands, Drake treks into the Arabian desert and find himself pitted against a clandestine organization, again having to fend for himself as he locates treasure. The most cinematic of the trilogy, Drake’s Deception boasts the most mature storyline and features a great antagonist in Katherine Marlowe. There’s some slow segments, but the sheer scale and incredible sequences like fighting out of the back of a cargo plane more than make up for them. 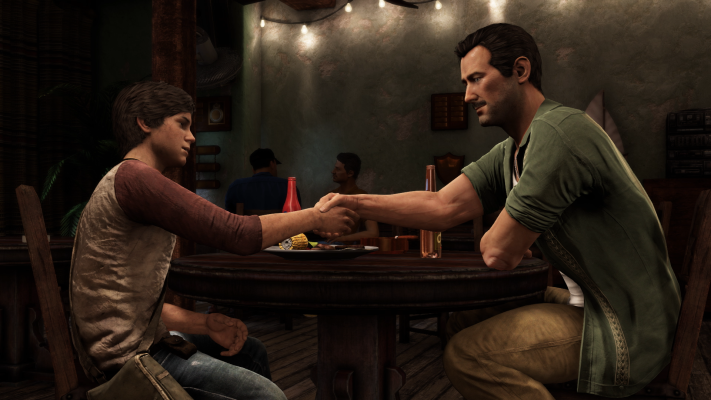 Even though its games aren’t particularly old, the Uncharted series hasn’t aged as flawlessly as one might assume. There’s far too many mindless “go into an area, take cover, shoot all of the enemies, find the way out and repeat” segments. By far the worst offender is Drake’s Fortune that has full levels of repetitive shooting and platforming that even in 2007 wasn’t up to snuff. Uncharted 2 and 3 also suffer from this throughout, but the level design, story, pacing and scale help disguise their issues. If anything, playing this series in 2015 shows how rapidly the gaming landscape has changed. Compare any of the games to the Tomb Raider reboot, for instance. While that game doesn’t match the scope of the latter two Uncharted games, it does practically everything they do on a better, grittier and less repetitive scale.

In general games have become more open and persistent, with titles like Shadow of Mordor seeming like a living, breathing world and even ones that have stayed linear, like Naughty Dog’s own The Last of Us, feature poignant stories and dynamic design even in a straightforward format. One only needs to look at third-person shooter The Order: 1886 to see that linear third-person shooting has quickly grown past its prime. That all being said, however, while some in this genre have rapidly become dated to the point of unpleasantness, all three games are still undeniably great and the latter two are practically the pinnacle of their kind. 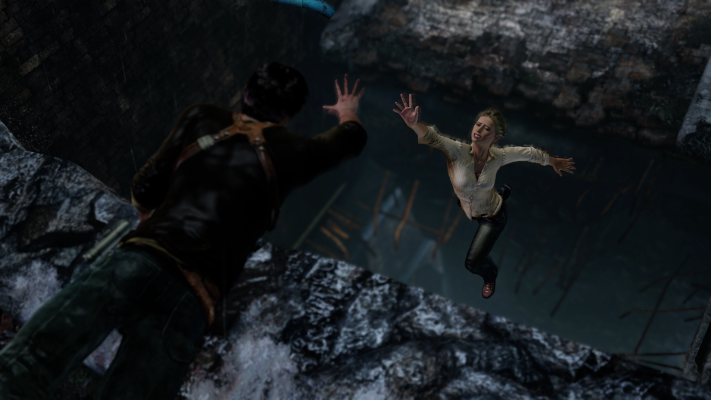 So now that we have the basics of the trilogy and how they hold up in modern (as if 2007 is ancient) times, the big question is what’s changed. Not much, actually. It must be remembered that these titles are not that old, still look great and don’t have a lot of leeway for additions. As such, Bluepoint has honestly done what they could to gussy them up. The most noticeable change is that all three games are now in 1080p and target 60fps. Throughout Drake’s adventure, there wasn’t any sign of frame rate hiccups or resolution dips. For those who look to HD remasters like upgrading from DVD to Blu-ray, this collection offers that base appeal. Purely from what they’re able to do with the games on PS4, it makes the collection the definitive way to play moving forward.

Besides that, character models have been improved with more skin shaders and better hair for Nathan, more wrinkles for Sully and a slightly altered face for Chloe. Gone are her plump lips and sparkly eyes, replaced with more realistic (but still similar) facial features. Besides that, the enhancements are fairly negligible. Any screen tearing has been removed from Drake’s Fortune, environmental lighting is improved, the draw distance is increased and the texture resolution is bumped up and smoothed out. All three games look fantastic on the PlayStation 4, but then again, they’ve always looked fantastic.

As far as what’s new, there’s most noticeably three new games modes. The incredibly punishing Brutal Difficulty has been added and is unlocked after beating Crushing Difficulty, players can now Speed Run through all three games with a persistent timer showing and tracking times against friends and there’s Explorer Mode for beginners where difficulty is significantly reduced. Other than that, a photo mode has been added, trophies have been adjusted, new skins and renders added and the soundtrack has been remastered. All minor additions, but again, there’s just not a lot that can be done in that department.

Comprised of the three games that most define the PlayStation 3, it’s nice to be able to experience the trilogy on current hardware. There’s not a lot new here, but all three modern classics are presented likely as good as they’ll ever look. None measure up to what we’ve seen from Uncharted 4, but all three shine in 1080p and are right at home alongside other PS4 exclusives. With such a rapid advancement in the industry, the trilogy hasn’t aged perfectly (especially Drake’s Fortune), but all three still hold up and are some of the most cinematic experiences to grace the format. Anybody who’d like to replay the series or experience it for the first time before the looming release of Uncharted 4 have no reason not to pick up The Nathan Drake Collection; it’s simply the best way to experience three great games.