Survival horror is in a bit of a rut.  Everyone on the planet wants to make the next Silent Hill, and time after time what we actually get is little more than a retread of places we’ve been before featuring new variations of monsters we’ve fought before, and that’s the opposite of scary.  Horror isn’t about the familiar, it’s about the unknown.  How many more inhuman twitchy sex-nurses stalking decayed and rusting halls do we need to see in one lifetime?  Project P.T. could have turned the overly-familiar into something new but Konami imploded into a shambling mockery of their former selves, and Resident Evil is an action series with zombies.  Frictional Games does amazing work at a rate of one game every five years, but otherwise the horror genre is in a fairly sad state.  All-consuming dread could use a facelift, and Visage looks like it’s got its scalpel sharpened and ready.

Visage is a “psychological first-person horror game”, according to its Greenlight page, and its alpha gameplay trailer is looking awfully wrong in all the right ways.  The game takes place in a terrible house where bad things have happened to undeserving people, except the house is very clearly not an actual building.  The individual rooms look fantastic, with a lot of attention to detail and the looking like places where people might actually live.  The house layout, on the other hand, makes no sense at all, with doors everywhere and rooms connecting to each other in an endless floorplan.  The video starts with you waking up in the bathtub, hopefully wearing clothes but no promises.  A little exploration turns up an empty house that really could stand to be emptier, what with all the creaking doors and occasional jump-scare to keep you on your toes, and that lunging Pac-Men lamp is all kinds of wrong as well.  Then the corridor of doors shows up and everything goes off the rails. 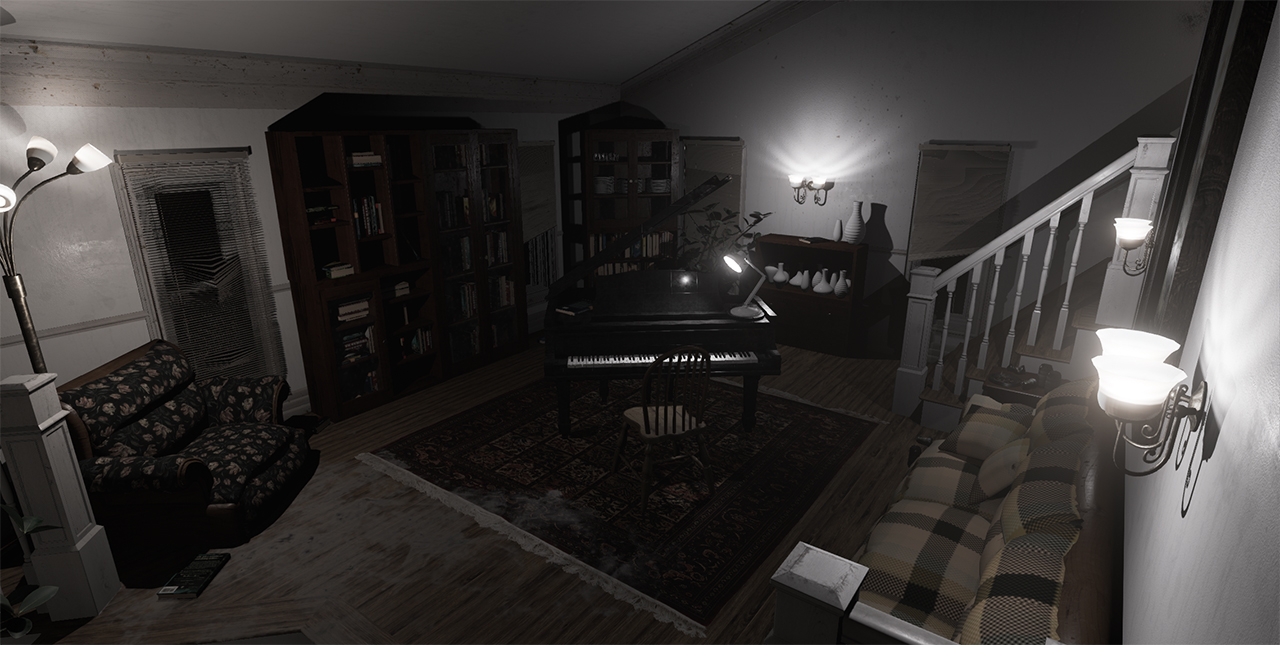 Horror is different for everyone but what made this trailer work for me was the familiar setting and the closed doors.  The house looks normal, other than that it seems to extend in every direction for fairly close to forever, but those doors are the kind you don’t want to open.  At one point the player turns away from a half-open door and the only thing I can think of is what a terrible idea that is, feeling tense while watching despite knowing how silly it is to let a streaming video of someone else’s game have that effect.  The strong combination of subtle audio cues and the aftereffect of a recent jump-scare are made all the more effective because the setting is so believable in its normalcy, and if Visage can pull that trick off for the entire game it should be something special.

Visage’s gameplay is that of exploration, with no weapons for the player and no way to fight back, and the need to manage fear to avoid giving the shadow-beasts something to track.  There’s also a level of randomization in the events, designed to make it hard to predict if you’ll see the same things on a second play-through or have an area enhanced with a new set of scares.  There are a lot of good ideas kicking around in Visage’s development, and the video shows real talent in bringing its world to life, but first it needs to clear Greenlight and then a pending Kickstarter to make its projected 2016 release.  Head on over and give it a look, or at least watch the video below to see its haunted-house creepiness in action.