When we go out of town on a trip, the wife typically has a co-worker swing by once a day to feed the cats and clean the litter boxes. One day, this person brought her young son with her.

“How many kids do they have?”

“Really? Because they have a lot of kid’s stuff.”

Part of this is due to having hobbies that that are childish. I enjoy collecting Transformers, Tron and gaming memorabilia. Another part of this is a severe misunderstanding of the Tom Hank’s movie Big. It turns out that it was not intended to be a “how-to” guide (oops!).

Being an unapologetic geek with no children and a wife who has pretty much just given up, Loot Crate seemed like a great product. Every month, subscribers would receive a box filled with random nerdy nonsense to clutter the house and decorate less discerning mantles. It was fun. Recently, though, the popular service has begun a downhill face plant. The included items have been less useful or cool. I have heard it argued that this was to drive folks to their “Level Up” service, where folks can kick in more to receive niftier items in their box. With the introduction of this “feature,” and a noticeable decline in the packages, I discontinued my subscription. 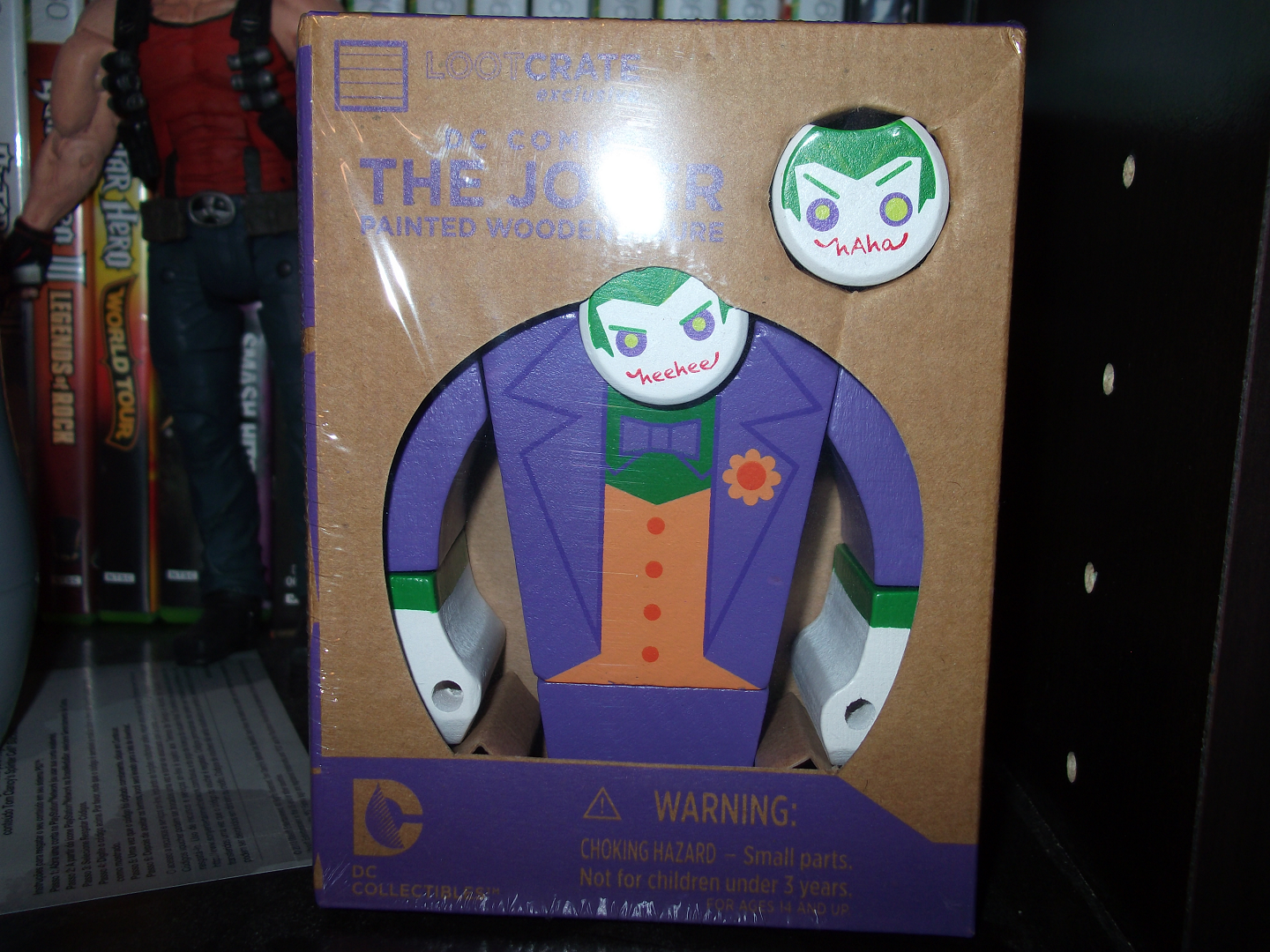 Some things I haven’t been able to even give away.

The problem was that I got used to the idea of the monthly box. I liked the idea of having a little present for me every month. It felt like somebody cared, even though that somebody was me with a credit card. So, I trolled the internet looking for another service that could only occur in the first world and decided to give Arcade Block a try. This service is part of the Nerd Block series, with different themed subscriptions for more specific tastes. They do have a general Nerd Block, Horror Block, Comic Block, a couple focused on children and will be introducing a Sci-Fi Block.

So, I put down the cash and quickly received a welcome block, which featured a sampling from their various subscriptions. The only standout was a Fox Hound branded cap, though I liked the idea of the Guardians of the Galaxy nesting dolls. Still, it was just a small little bonus thing. No stock was put into the quality of the subsequent services. At this point, I am certain that you are expecting this information to be used as foreshadowing. “Oh ho,” the smug among you might say, “He implied that he was not impressed with an initial package but wrote it off. He is about to reveal a profound disappointment. What a unique and not overused at all literary concept!” 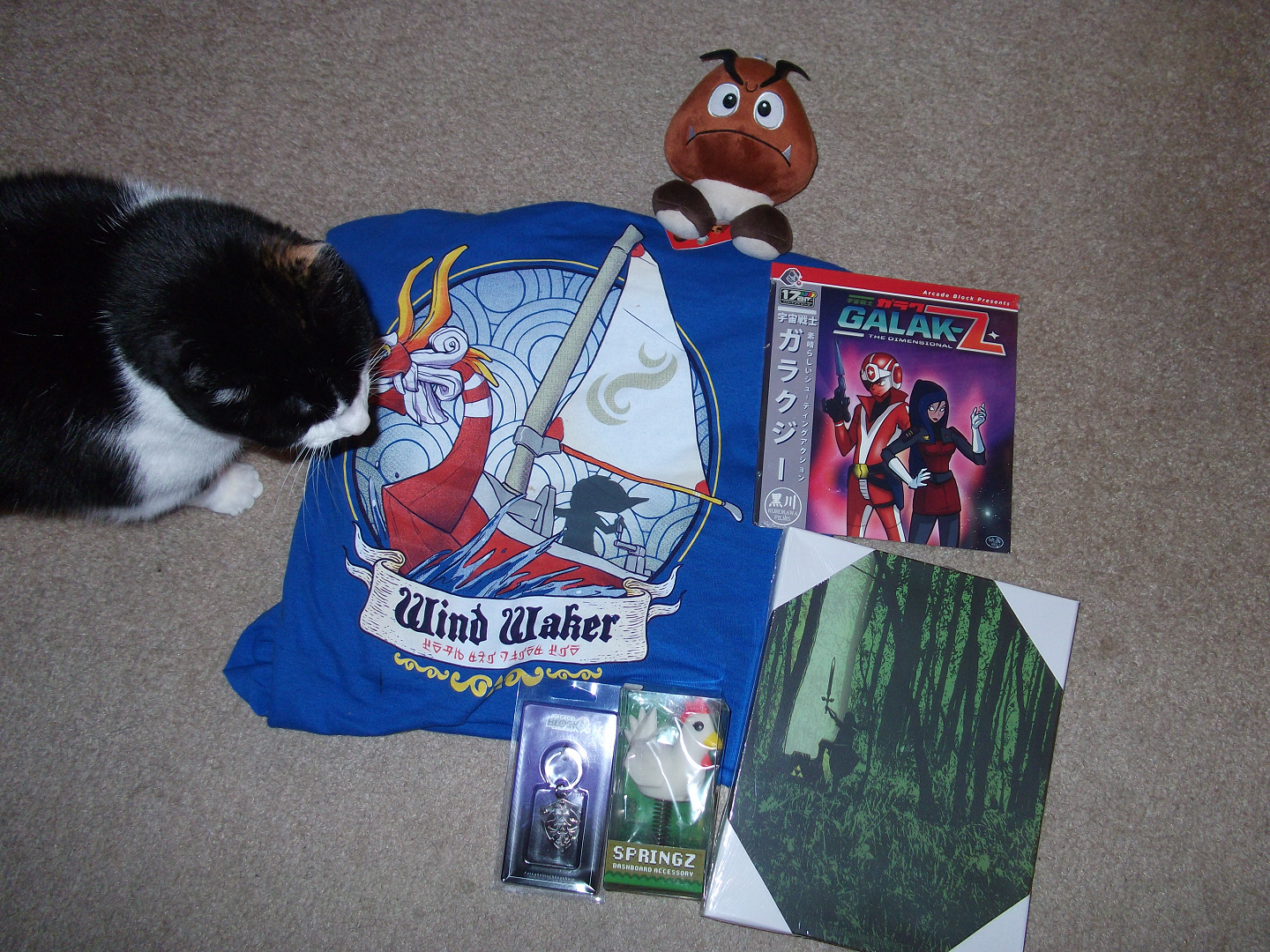 And I am disappointed that I had to supply my own cat.

First of all, why are the imaginary straw people I write about such jerks? I don’t treat people this way. Why does it seem to be attributed to the non-existent? Secondly, nope. Not foreshadowing. I have received my first box. It is legendary (of Zelda). Arriving in a box that is a loving homage (and only a homage, IP lawyers) to the NES, this thing was brimming with fantastic little pieces. This month’s theme seemed to be centered around Nintendo. Specifically, the Zelda franchise.

It included a Wind Waker shirt, a nice canvas print for hanging, a really intricate Hyrule keychain, some chicken-on-a-spring thing for car dashboards, a plush Goomba, and a Galak-Z vinyl single. Each of these items are of a very high quality, and they all fit my criteria for being included in my house: they are either cool or can be used. I have already worn the shirt, will be hanging the canvas, and am choking the chicken as I write this. 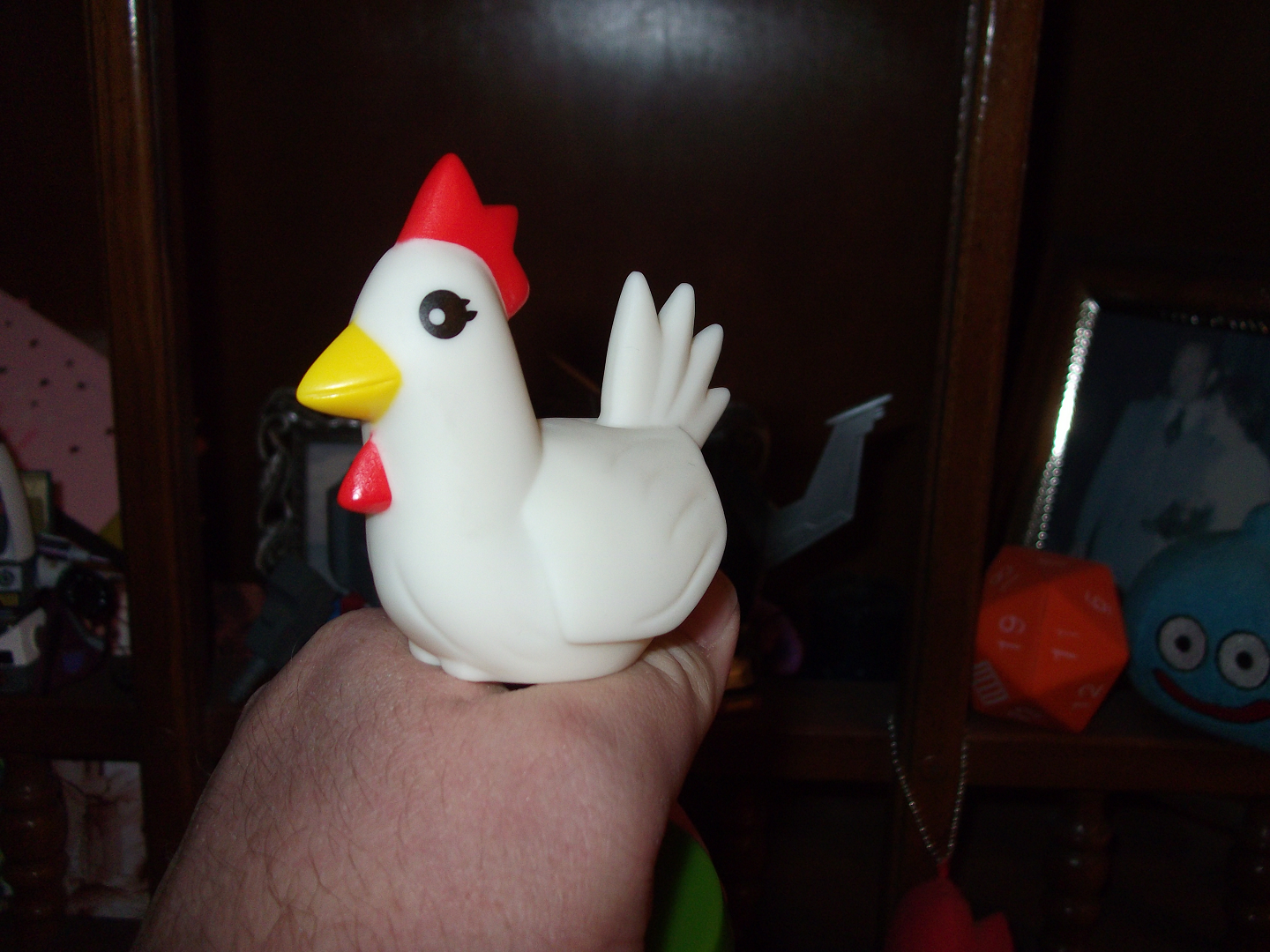 Folks like me who are finished with Loot Crate but enjoy the concept, take heed. There are other options out there. It is my opinion that Arcade Block succeeds where Loot Crate is starting to fail because the block is more specialized. Having to cater to different subsets of nerdery among a growing subscription base is diluting the product of the popular service. For a better alternative, check out Nerd Block’s site. I plan on being a paying customer for a while.