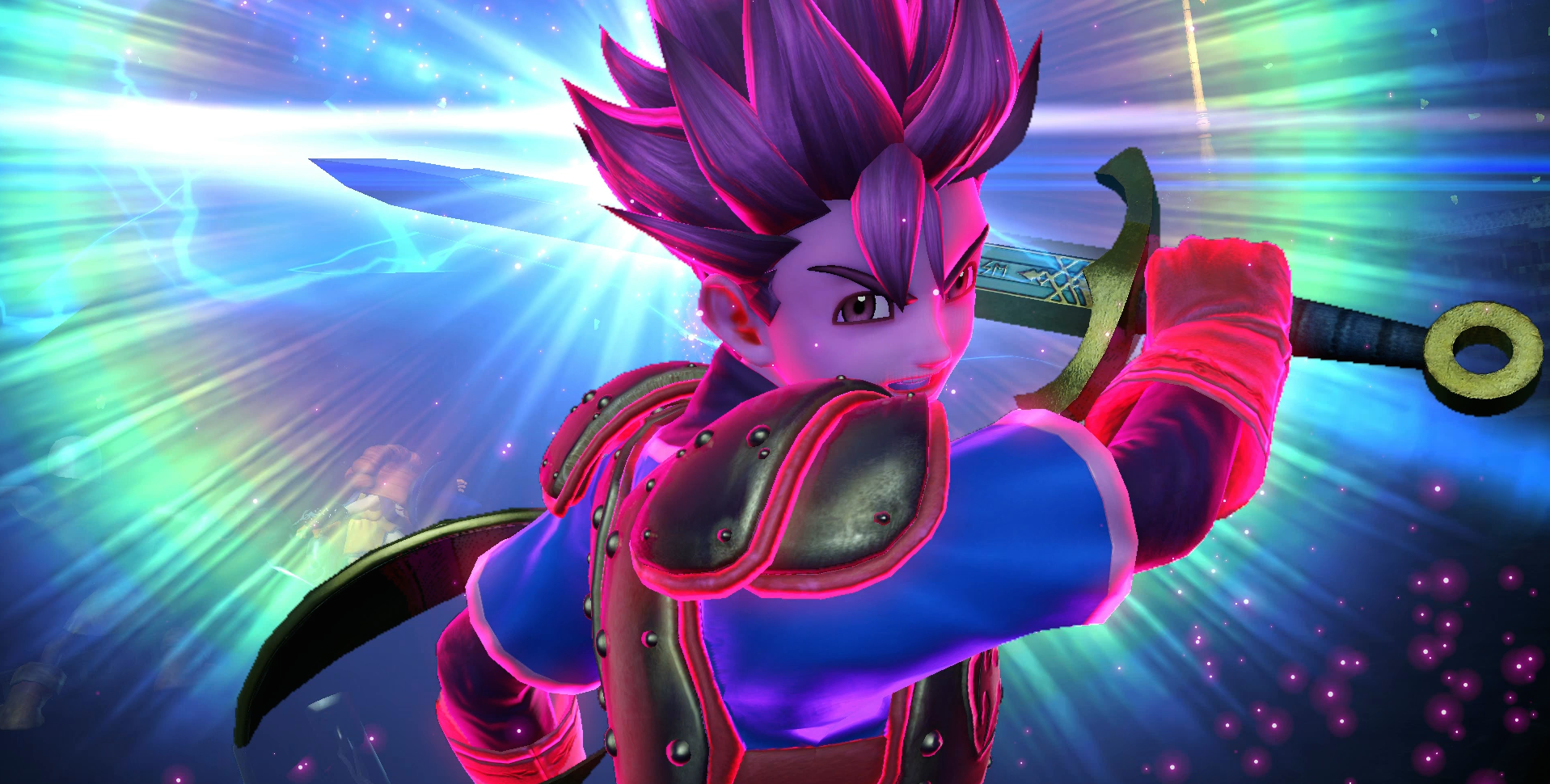 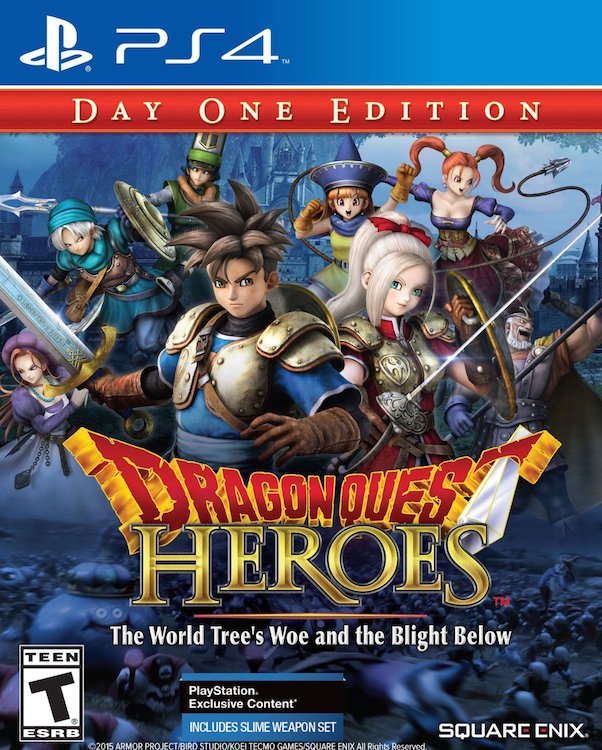 Dragon Quest Heroes: The World Tree’s Woe and the Blight Below

It’s hard to forget the excitement of seeing that first King Slime bounce onto the screen during Sony’s press conference at Tokyo Game Show one year ago. Even though the PlayStation 4 had only been out for a year at the time, it looked like the unthinkable was happening; Square Enix was finally announcing Dragon Quest XI for current-gen platforms. Crushingly, that awe and excitement soon gave way when it was revealed that it was actually an Omega Force game in the vein of Dynasty Warriors. Although nothing could beat out the hype for a new mainline Dragon Quest (which would be announced a year later), the excitement level quickly rose as more was revealed; it wasn’t a simple re-skin of Dynasty Warriors, but instead an original Dragon Quest game that simply used similar combat. With a sequel already announced for Japan, Dragon Quest Heroes: The World Tree’s Woe and the Blight Below has finally hit our shores and begs to be noticed.

Dragon Quest Heroes takes place a long time ago in a dimension far removed from our own, where humans and monsters peacefully coexist. One day as the most important festival of the year was beginning, however, a dark shockwave sweeps through the world and all of the monsters are suddenly and inexplicably driven into a frenzied rage. Now it’s up to heroes Luceus and Aurora to figure out the mystery and purge all of the monsters from the land (those poor Slimes) before it’s too late.

Although Luceus and Auora are brand new heroes, they’re joined along the way by some of the most beloved characters from the series including Dragon Quest IV’s Maya, Dragon Quest VIII’s Yangus, Dragon Quest IV’s Kiryl and Alena, Dragon Quest V’s Bianca and many more. While there’s enough memorable Dragon Quest characters to fill an NFL roster, Omega Force did a commendable job selecting a diverse cross-section of protagonists and ones that would fair well in a hack ’n’ slash. There’s also an impressive selection of classic monsters to square off against including Slimes, Imps, Golumns, Drackies and Skeletons just to name a few. It’s awesome witnessing these incredible Akira Toriyama designs come to life on current-gen and seeing them this way proves how timeless they truly are. 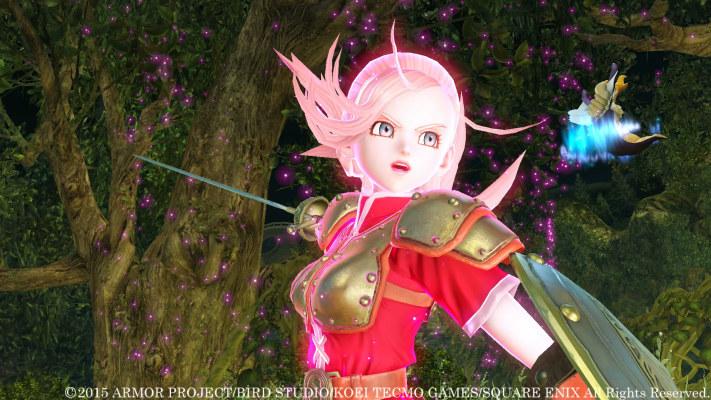 While a decent story wouldn’t be expected in a game of this type, Heroes actually offers one quite in line with the rest of the series. Of course it’s not as deep, but there’s a lot of content and conversations — including optional ones between levels. All of the dialogue is well written and often humorous, with the only black mark being spotty voice acting. It’s serviceable (with the exception of Healix, the adorable Healslime who inexplicably sounds like a six-year-old British boy in the game), but unremarkable, and a bit distracting that every single character has a multitude of European accents. Thankfully, Square has given the players the option to listen to the original Japanese track for purists and those who want a decidedly more eastern vibe.

The gameplay indeed mirrors that of Omega Force’s famous “Warriors” franchise. Heroes is actually the latest in a trend that sees the gameplay injected into famous franchises, following Dynasty Warriors Gundam and Hyrule Warriors. It’s a fantastic idea for a spin-off as it can’t be too difficult to create a new adventure around the same basic gameplay and one that will likely continue to be expanded. While Hyrule Warriors adhered too close for comfort to the Warriors format at times, Heroes has enough Dragon Quest in its DNA to come into its own. One of two control schemes can be chosen; Quick Controls allow simple button combinations where players can predominantly mash square and triangle and see success, while Slick Controls doesn’t as easily allow this and focuses more on combos. That being said, Slick Controls still places combat on the aforementioned face buttons, and considering that Quick Controls allow combos to still be input, it confuses things and should be avoided by most everybody. Combos are simple enough to be quickly memorized which is a good thing considering that almost a dozen characters can be controlled. 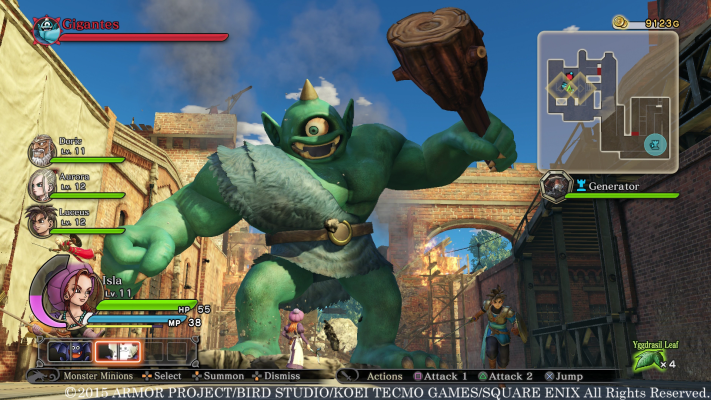 Heroes allows up to four characters to go into combat at once, swappable at any time with the tap of L2. Each character has its own strengths and weaknesses; Isla has a boomerang and is fantastic for ranged attacks, for instance, while Doric is a brawler but doesn’t have a lot of defense. More still, each character has their own special abilities that are triggered holding R1 and hitting a face button. As each character’s abilities are different, expert players will want to master them all and use them in the right instances. The characters are unlocked throughout the course of the game and join at about an equal level as other characters; combined with the fact that non-party characters still earn XP (although not as much), and it makes maintenance less difficult than it probably should be. Continuously swapping characters throughout a battle can prove challenging, however, as it can be difficult to remember how to best utilize each character at the drop of a dime. Sticking to just a few and letting the AI do the rest is perfectly acceptable, although it won’t maximize effectiveness. Given this system, it’s mind-boggling why co-op isn’t included. It seems like a no-brainer to simply let another human player — online or on couch — pick up a controller and take the reins of one of the characters. It’s a shame, too, as being able to play with buddies seems like it’d be immensely enjoyable.

Most of the levels — playing out in environmentally varied worlds like Sylvea, Colissea, Caliburgh and Arba —see players defending an item or NPC from waves of enemies rapidly approaching from multiple directions. Enemies are swamped via portals dubbed “Nightmaws” that are manned by Mawkeepers (glorified Imps). Defeating a Mawkeeper closes the Nightmaw and stops any more enemies from spawning from it. As some maps can have several Nightmaws constantly spitting out enemies, this can be essential to not be overwhelmed. As there are oftentimes multiple paths to keep track of at once, Omega Force has devised an interesting system that sees enemies intermittently dropping Monster Medals. Monster Medals allow players to capture the essence of that enemy and summon them to fight. There are two types of medals — Sentry (gold) and Saviour (silver) — with Sentry medals summoning the monster to fight enemies in any spot on the map and Saviours performing one-off abilities (like a Dracky restoring MP or a Bubble Slime blighting the battlefield with poisonous puddles) and disappearing directly after. It’s a nifty system that adds a layer of strategy to the proceedings and calls to mind Dragon Quest Monsters. 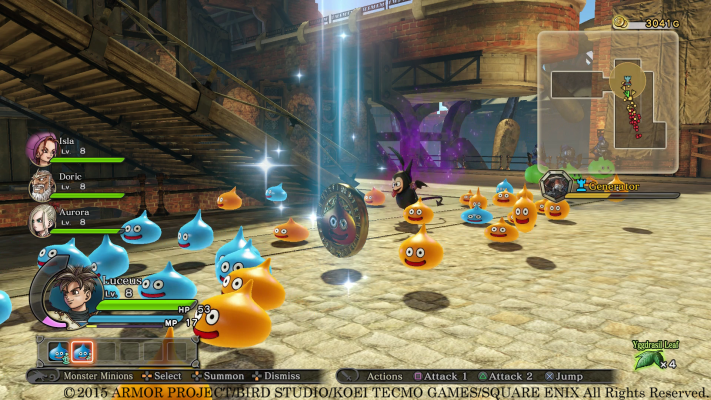 In between levels, players are taken to a central hub in the form of The Stonecloud, a massive floating ship built (probably single-handily) by Isla. The Stonecloud features multiple merchants, NPCs to chat up, a mail counter that expands on the story through letters, the Accolades Counter that rewards players for unlocking trophies and an alchemist who can create useful items via not-so-useful items picked up on the battlefield. When players are ready to get back into the thick of things, they head to the world map and choose where to go. Former environments can be revisited to grind and pick up items and side-quests happen in the form of caves that are unlocked by finding maps throughout the game.

Extending gameplay even more is the Quest Counter which allows players to accept up to eight quests at a time. Most of these are fetch quests that require a certain amount of items and can be inadvertently completed simply by playing through the main story, but many do require hunting. Completing these quests and unlocking trophies rewards players with mini medals that can be redeemed in The Stonecloud for incredibly useful items and equipment. Having so many merchants, equipment and items add an RPG level of strategy that, with the combination of skill points used to unlock special abilities, can easily see players sinking hours into optimizing their party. 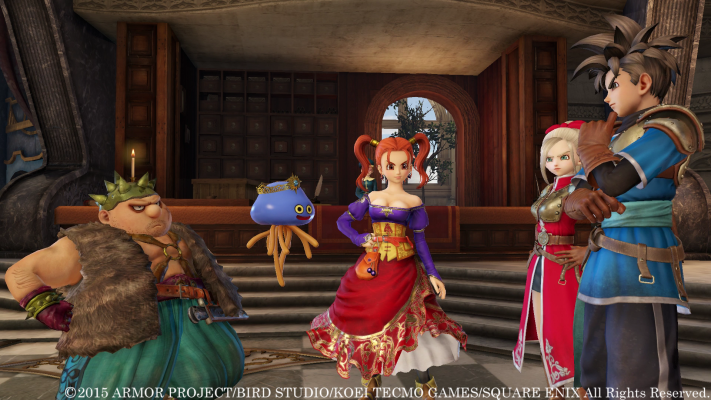 Dragon Quest Heroes is a perfectly-balanced marriage of Dragon Quest sensibilities with Dynasty Warriors dynamics. That sounds exactly like what it should be, but easier said than done, and Omega Force has done it. The Dragon Quest franchise-correct writing, characters, music and even sound effects make it feel as if it were co-developed by Level-5 and quite frankly it’s shocking it wasn’t. Like all games of its ilk, it has a propensity to get repetitive, but there’s enough environmental and gameplay variations that it never becomes a slog. Although it could have been a quick cash-in, Heroes is a love letter to Dragon Quest fans that stands as its own charming adventure.