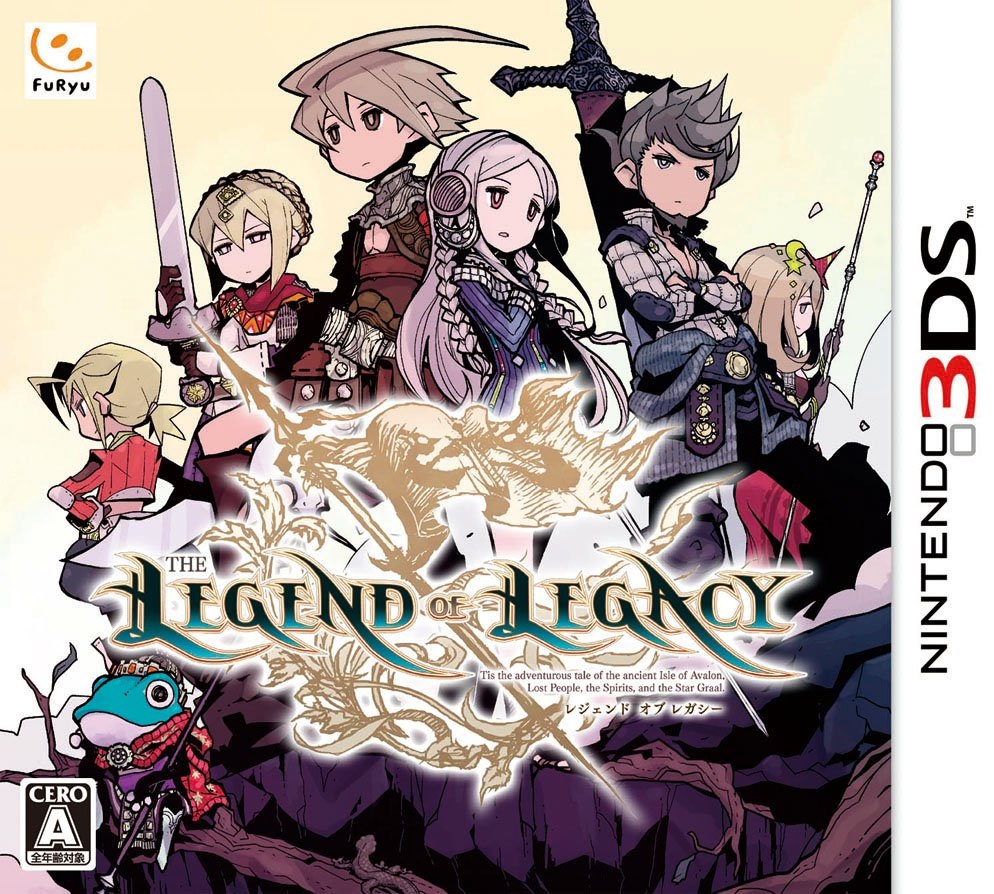 The Legend of Legacy

The Legend of Legacy looks like it should be stellar, but this is a SaGa game in everything but name; a series that if nothing else proves that looks can be deceiving. Those looking for a story-driven experience have picked up the wrong game. The Legend of Legacy is not something for anybody seeking the next great piece of literary gold, because the plot and characters here have just about the depth of a mud puddle. Now, that’s not a bad thing. After all, the SaGa series was one never known for its award-winning narrative, though they have historically employed more robust stories than that which is seen in this particular title. What we’re left with here is a game that has a half-dozen or so characters that players can befriend and quest with. How each of them comes to the player and ultimately accompanies them on their journey is lackluster, to say the least.

The game starts off with folks choosing their main character, and from there they pick up their adventuring party one by one. Most of the time all this really means is deciding to talk to a seemingly random person in town, who in the span of only a couple lines of dialogue, decides that they want to take up arms with the player and subsequently throw themselves into harms way in your company. Each of the characters do have their own reasons for getting involved in the story, but are never fully fleshed out throughout the journey. Who Owen is at the beginning of the game, is more or less who Owen is at the end, unless the player chose him as their main character at the start of the adventure.

There are seven characters from which to choose at the start of the game, each with their own individual adventure to tell; wonderful for replay value, but their personal histories never seem all that interesting. Hence why it’s a shame that character and plot development are such secondary, and more often tertiary, factors in the overall experience because they have the potential to be compelling. It’s difficult to become attached to the cast because we rarely found out who they were, what governed them internally and why it was important for them to embark on their quests. Sure, Garnet may be on a course for revenge, which unfolds over the game, but these character growth segments are sprinkled so few and far between that by the time it’s revealed what motivated a particular character, it’s hard to care. The minimalist storytelling will be music to some player’s ears — and that’s great — but the lack of story is a missed opportunity as the premise that the writers have provided is fascinating. 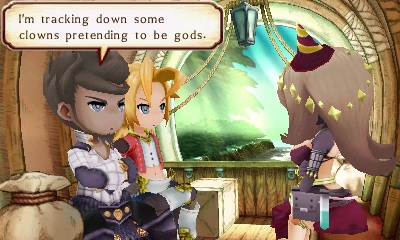 Fortunately, the gameplay in The Legend of Legacy fares far better. It’s standard upon first glace, what with the player adhering to the tried and true formula of: wander about town, get a quest, delve a dungeon, find loot…rinse, repeat. It’s when folks go beyond the surface, however, that the gameplay twists that have been added to the tired template reveal themselves. For starters, the town acts as a hub-world of sorts in which players recruit new party members, buy and sell items, talk to the king (who provides most of the main story quests), and the usual stuff. But then, when out in a dungeon, things get more interesting. Before we get to that, it should be noted that the game has no proper “overworld.” Once players exit town, they are taken to a map that they then simply click on a location and fast-travel to. Some purists will not particularly like this, though we had no beef with it.

Once folks get to their destination, the game employs an Etrian Odyssey-like map system in which the new dungeon/area is complete uncharted territory. Only by exploring the zone will folks be provided a map of sorts. On the bottom screen players can see how much of the map they’ve uncovered via a percentage meter in the top corner; once a map has been completely discovered and thereby filled out, they can then sell the map back in town for a pretty penny. Selling a 100 percent-completed map will net big money, whereas turning it in, at say, 50 percent, will effectively cut the price that buyers are willing to pay in half. It’s a neat system that rewards those who love the exploration aspect of roleplaying games. 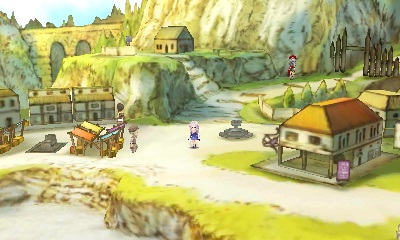 This map exploration piece ultimately ends up as a primary means of making money, as making money the old fashion way (a la killing monsters) is a slow burn. In fact, we were pretty much broke for the first few hours of the game and had to make do with our default equipment to survive combat encounters. This of course meant fighting underpowered monsters long enough to earn enough cash to purchase some new equipment so as to move on to bigger and badder things. Speaking of battling, The Legend of Legacy‘s combat engine is interesting. First and foremost, the battle setup here is turn-based, in the vein of the JRPGs of yesteryear. It’s not as pure a nostalgic experience as one might expect when hearing that, however, instead marrying old-school design philosophies with newer ones, such as a class system, to keep players on their toes.

Essentially, what players will need to do in order to make it through even the most basic encounters is put together a team that can take damage, dish out some of their own, heal their wounded and also employ buffs and debuffs to comrades and foes respectively. There are MMORPG elements in all of this, especially when assigning party roles such as tank, DPS’er, and healer (pro-tip: those three positions are almost a requirement in any situation). This makes fights more tactical than a more traditional turn-based system as there is now quite a bit of pre-planning that goes into each battle. In all honesty, pre-planning is practically a necessity as this is a hard game. The Legend of Legacy looks cute from the outside, with its super deformed, Bravely Default inspired, chibi-like character models and its vibrant world. But it won’t hesitate for a minute to eat players for breakfast and then ask for seconds. 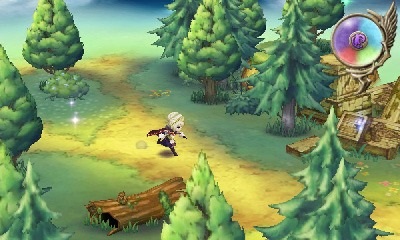 It’s not difficulty that’s the issue here, it’s the fact that grinding is all but a requirement to get through dungeons and bosses. Not just a little bit of grinding, this game is a grind-fest through and through. It’s old-school in that way, which some will love, but it often felt like the game did not respect our time. Bravely Default, especially in the back half of the game, felt grindy like this, but Legacy takes the concept to a frustrating new level. It’s not uncommon to grind for an hour, not even in preparation to trounce a zone’s boss, but to merely get past its more regular baddies is ridiculous. At least the encounters aren’t random, as all enemies show up on the field and thus can be steered around, but doing that will only make things worse for the player as they will end up missing out on vital loot and experience.

In the aspect of difficulty and grind, there’s another facet here that makes The Legend of Legacy feel more akin to something like Final Fantasy II than any new-age JRPG; it seemingly goes out of its way not to tell players where they need to go. The king will tell folks the next zone they are to explore, but once they get to said zone, there’s no direction as to how to proceed; players just have to figure it out on their own. While we liked this non-linear structure, the game yet again asks a lot of the player in terms of time investment. Whereas many games today cater toward short-burst play sessions and immediate gratification for the player’s efforts, The Legend of Legacy doesn’t. It simply doesn’t care how many hours one has to invest to get the most out of the game, and that might take some getting used to, even for the typical JRPG enthusiast. 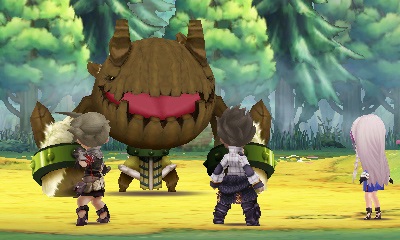 The Legend of Legacy utilizes a unique kind of system in which characters themselves don’t level up overall. Instead, attributes and attacks level up. This is a divisive system that rewards a player’s use of repeated skills, but also extends the need for grinding more. For instance, if a player uses the “Lunge” attack often enough, that attack will level up and grow stronger. But by leveling up “Lunge,” the player may not be providing needed leveling time to other attacks that are available, which means to use those effectively, they will need to engage more enemies just so they can beat up on them with that now under-utilized attack to enhance its strength.

This wouldn’t be a problem if certain bosses or even run-of-the-mills enemies didn’t have particular weaknesses that essentially require players to attack with specific skills. What this results in, then, is players just crossing their fingers in each boss encounter, hoping they’ve leveled the right attacks to topple their foe; because if not, it’s back to the grind. On the whole, we liked the leveling system used, and hope that more developers take cues from it, but it definitely only lends itself to a deliberate type of gamer–and anyone not within that target demographic may find themselves wishing for something more conventional and streamlined. At least combat is generally fun, so the need to revisit it so frequently isn’t as painful as it could be, or even sounds. But there certainly is a disproportionate ratio of combat to any other aspect of the game. Consider yourself warned.

Let it be known now that The Legend of Legacy‘s aesthetic presentation is top notch. The art style is strong, if a little too similar to Bravely Default‘s, and the whole game looks quite magical. The pastel hues, the watercolor painting-like backdrops, the way that environments pop into the field of vision like a children’s pop-up book are all things of beauty. Menus are especially slick and are easy to navigate — a welcome addition to any RPG that requires its players to tinker around with character loadouts as much as Legacy does. The audio presentation is also impressive. While not as diverse as, say, monster designs, it does a nice job of offering tunes that fit each location and situation; the combat music is especially well composed, giving just that right sense of tension and urgency. There are whimsical pieces, sinister ones and plenty of in-between. It isn’t the most memorable OST, but it more then gets the job done. 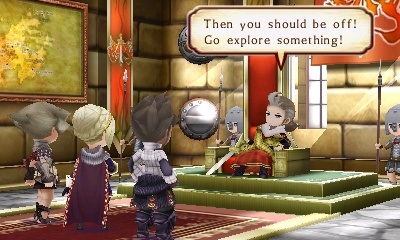 Maybe our own expectations and hype got in the way, but the finished product is not exactly what we thought we were going to get. This is indeed a SaGa game in everything but name, as its trappings are both traditional and experimental, but while sometimes this mash-up of design philosophies pays off, it falls flat at other times. The most ardent JRPG fans will find much to like; though casuals be warned: this is a grindy timesink. Even the rock-solid combat mechanics can’t offset how much grinding is present. In fact, it’s hard to recommend to an audience other than hardcore Japanese roleplaying game aficionados because of how many great RPGs have just come out or are getting ready to. With titles like Xenoblade Chronicles X, Disgaea 5, Dragon Quest Heroes, Yo-Kai Watch and Stella Glow having just been released or getting ready to, The Legend of Legacy is facing stiff competition; how old school you like your RPGs will ultimately be the deciding factor on whether or not this is a must-own.