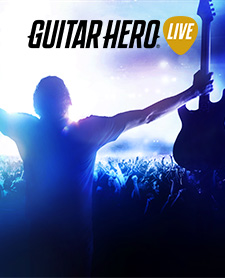 Guitar Hero and Rock Band epitomize the concept of oversaturation. Just as quickly as the genre debuted as a specialized rhythm game published by RedOctane in 2005, it ceased production in 2010. That’s an astoundingly quick boom and bust cycle for anything, let alone a video game franchise, and quite shocking in retrospect. The world went from having nightly Guitar Hero/Rock Band bar nights to the plastic instruments popping up in landfills and thrift shops worldwide (during a trip down to the small old west town of Willcox, Arizona just last week, I encountered multiple Rock Band and Guitar Hero peripherals spread across three “antique shops,” far and away the most recently produced items there right after VHS tapes). While the failure of these franchises could be attributed to them simply being a fad (á la Dance Dance Revolution), Activision and EA played the biggest roll. There were more than twenty Guitar Hero releases in only five years; that’s in addition to eighteen Rock Band games, two DJ Heroes and Band Hero, all of which made matters even worse. Suffice it to say, if Malcolm Gladwell were to write a book on the subject of market saturation, there’s little doubt that an entire chapter would be devoted to these games. Shrewdly allowing the franchise to rest in purgatory for half a decade, Activision is back with the carefully planned Guitar Hero Live that hopes to recapture the lost fanbase and inspire a whole new generation of virtual rock stars.

Guitar Hero Live is split into two, almost separate, games. The core of the experience (but not where most time will be spent) is “GH Live,” featuring a full offline single player experience to strum through. Besides the gameplay itself (more on that later), GH Live is quite different from its predecessors. In past Guitar Hero games, there was an animated band playing in the background that would attempt to blow the virtual roof off a virtual venue filled with virtual fans. Quite frankly, this was always lame and it’s staggering Activision never broke away from it. GH Live presents a decidedly more mature way to play Guitar Hero, as the animations have been replaced with real-life FMV. Basically, multiple faux bands were assembled to play in front of faux crowds. The guitarist of each band was in reality a cameraman, filming the entire concert in first-person as if they were actually playing along with the band. This allows players to experience these concerts as if they’re actually in the band. Two different sets of performances were filmed for each song; one where the band is killing it and the crowd is going wild and one where the band is failing thanks to you and the crowd is becoming belligerent, making disgusted faces and even throwing stuff at you. While hopefully each performance will result in seeing the good FMV, they can fairly seamlessly switch between each other if things start to go south. This transition is possible due to your vision going hazy on screen and seeing the new reaction of your fellow bandmates and crowd when it returns to normal. It’s cleverly done and the FMV overall is impressive. 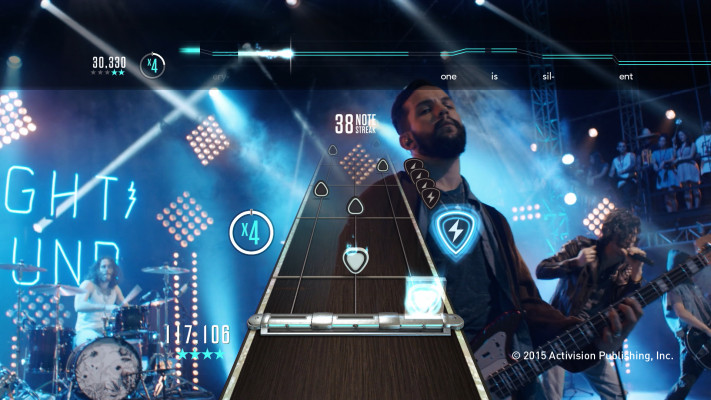 All of the “bands” that were assembled are actually playing and singing the song, but all of the audio heard is actually from the original recording. Failing on a song and seeing the disgusted looks everybody is giving you is truly horrifying (some might not even be able to stomach the embarrassment and quickly restart) and proves just how effective the FMV is. The only real issue are the terrible signs some members of the crowd hold up, with sayings like “you guys are so cool,” “excited,” “fresh” and my personal favorite “!!!!!!!!.” Considering that the crowd generally sings along to the songs, you think they could have passed out some more relevant signs (a few do show up, but there’s never enough), as it’s a noticeable distraction when trying to be totally enveloped.

GH Live is split up into two different festivals: Rock the Block and SoundDial. Rock the Bock takes place in the US and features faux bands like “Broken Tide” and “The Jephson Hangout” performing songs from real bands like Arctic Monkeys and Elbow, while SoundDial takes place in the UK and features faux bands like “Portland Cloud Orchestra” and “Our Pasts Collide” performing songs from real bands like Lumineers and 30 Seconds to Mars. Each festival has multiple sets that are broken up by genre and feature three songs each (the finale features five).  With forty-two songs in total and given that the festivals can be completed at any difficulty and it’s impossible to fail a song in Guitar Hero Live, GH Live can be easily completed in around three to four hours no matter the skill of the player. Of course, the festivals are really just a way to get players introduced to the concept and songs and once they’re completed, every song can be played at will in a quick play mode. 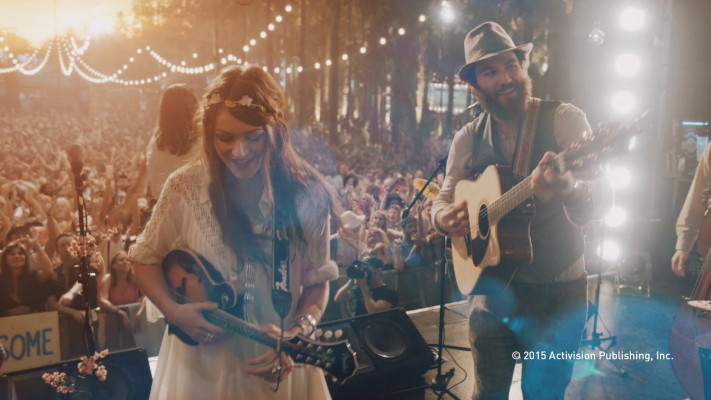 While GH Live is the core of the experience, GHTV is the heart of it and where players will be most spending time. GHTV is quite confusing, due fairly equally to the fact that the concept is new and the execution is convoluted. The best way to describe it would be as a playable music video channel. Players can choose from two channels at launch, each with a rotating block of shows featuring a single genre or concept. The songs are streamed live one after the other and the player can hop in or hop out at any time. During songs, progress is compared to friends and top players worldwide in a sidebar. While some may be content simply hanging out in the channels and playing whatever song is selected for them, every song (over 200 at launch) is playable on-demand. This is where the aforementioned convolution comes into play.

Sadly, playing on-demand music is not unlimited. Playing a song costs a “Play.” Ten Plays are rewarded for simply starting GHTV the first time and players are granted additional Plays from leveling-up from playing the game. Additionally, playing songs grants Coins that can be redeemed for Plays. Accurately completing a song tends to net around 150 coins. Three plays can be purchased for 1,800 coins, meaning that at the very least, playing around eleven songs in the channels will guarantee three songs on-demand.  For those that don’t want to spend the time earning coins or Plays organically, Hero Cash can be purchased which can then redeemed for Plays. 300 Hero Cash can be purchased for a dollar and 3 Plays can be purchased for 135 Hero Cash, meaning that a a dollar USD nets about seven or so plays (there’s discounts for everything when buying in bulk as well). Finally, a Party Pass can be purchased which allows unlimited access to on-demand songs for 24 hours. 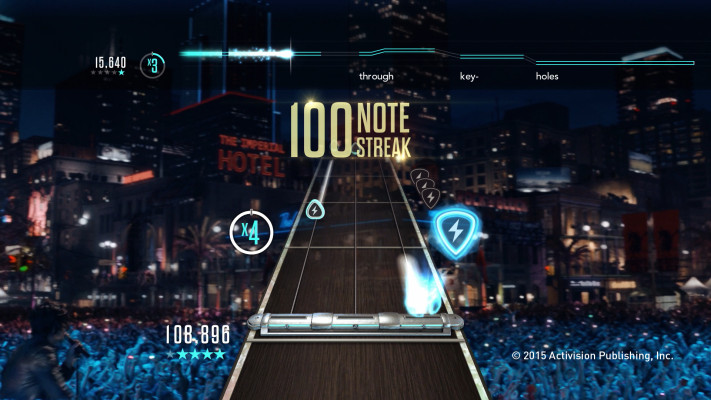 Considering there are a staggering four types of currency in play, the entire process is far more complicated than it has to be, seems far too similar to free-to-play titles and is sure to confuse many players (especially younger ones). That being said, it’s a great deal upon actually experiencing it. Considering 10 Plays are granted automatically, Plays are granted for leveling up and up to 1,500 coins can be amassed simply by logging in on a daily basis, there’s enough of a buffer zone that all but the most devoted players playing on-demand songs non-stop all day long (which is unlikely) will probably never have to buy a single play. We never did in a week of heavy playing which says a lot. After all, ideally players will want to spend most their time playing in the live channels.

In a preview of the game last month, we mentioned that GHTV could be the MTV of our generation. While it won’t literally happen if the current course is maintained, it literally could if some or all of the following are done. One of the features touted was the fact that Guitar Hero Live could be on in the background like an actual music video channel without even playing it, but this appeal is lessened due to the fact that the notes and  “Press to Play” in giant font remain in the middle of the screen when playing; there should be an option to turn it off. There should be new music debuted every week at minimum and once a song is added, it should never be removed. While it’ll be fine to add classic tracks for awhile, the focus should quickly turn to actively seeking out breaking music videos (with day and date with YouTube being the ultimate goal) for new songs. Once there is enough music added to the service, more channels should be added and each should focus on a single genre of music. Finally, and this is unlikely, but adding real life VJs into the mix would make this concept simply incredible and likely explode in popularity. Imagine if during prime time, somebody would chime in every so often to debut a new track or interview a band. It’d be an incredible level of interactively and enough that many would probably subscribe to such a service. 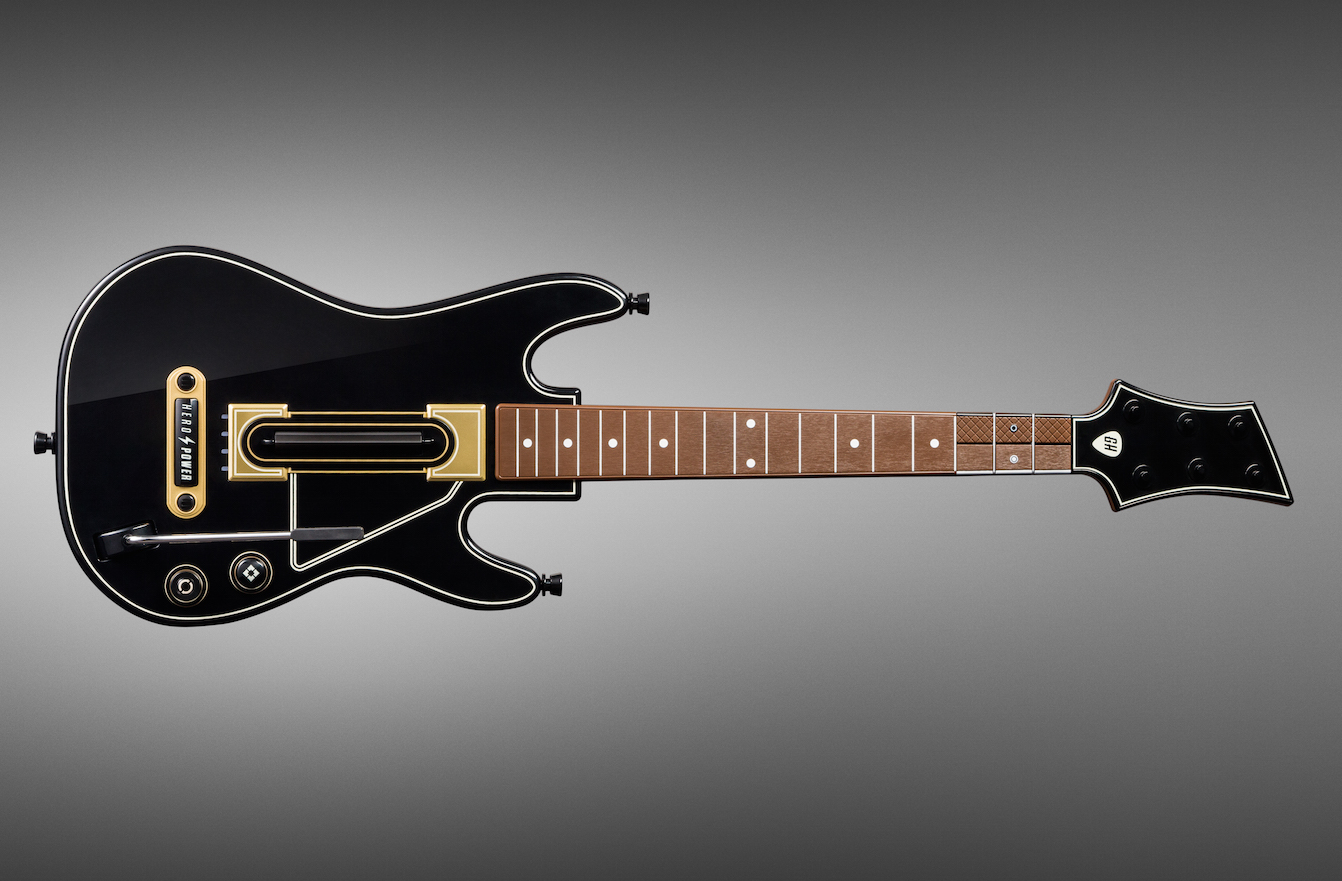 Physically, the most notable difference with Guitar Hero Live versus past installments is the guitar itself. Instead of having five colored buttons on the same row, there are now three black buttons on a top row and three white buttons on the bottom. While it doesn’t seem like a huge change, it makes it feel more like playing a real guitar, looks less cheesy and adds more strategy. There is a substantial learning curve, even for experts of previous installments, but once holding down a button from each row simultaneously is mastered, it feels great.

Considering that developer FreeStyle Games are based in the UK and that everybody from their team I’ve had the pleasure of meeting are knowledgeable music lovers or creators themselves, it’s not surprising how solid the soundtrack is. While it ranges from classic music to pop (with even a few EDM tracks inexplicably sneaking in), the emphasis is clearly on new rock music with a appreciative lean towards indie. Considering past Guitar Hero focused too heavily on power ballads and metal, it’s nice to go a bit introspective with songs like Angus and Julia Stone’s “A Heartbreak.”  Fear not, classic rock fans, as there are still a number of standards from bands like The Who and The Rolling Stones. Overall highlights include Dum Dum Girls’ “Rimbaud Eyes,” Sleigh Bells’ “Crown on The Ground,” The War on Drugs’ “Under the Pressure,” Haim’s “The Wire” and alt-J’s “Left Hand Free.”

Guitar Hero Live is clearly the product of music lovers. Instead of exuding cheesiness like past titles in the franchise, Live is wholly contemporary. From the font, to the controller, to the song selection, down to the gameplay itself, Guitar Hero Live feels fresh, alive and something that’s not embarrassing to have out at a party full of even the snobbiest hipsters. The song selection is impressive, the FMV is well produced and the GHTV concept is incredibly exciting. While there’s still trepidation due the fact that much of its appeal rests on unproven promises and its currency system is needlessly complicated, the idea of new songs being added on a weekly basis could render Guitar Hero Live into a persistent experience for rhythm and music lovers alike. Time will ultimately tell how Guitar Hero Live shapes up, but it’s alluring enough to once again raise your plastic axe to the sky and rejoin the virtual rock god army.