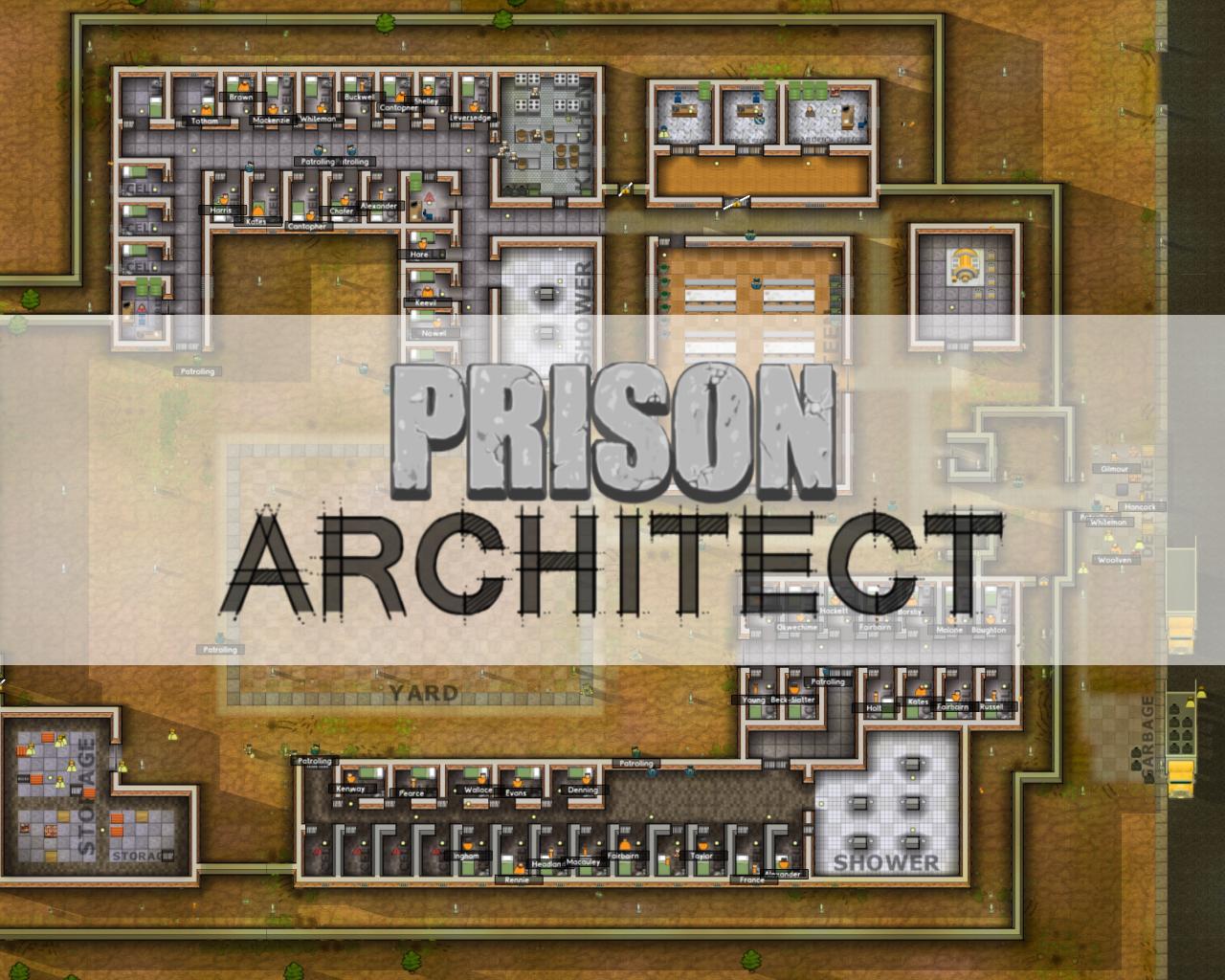 Prison Architect is not a game for children.  This thought was foremost in my mind after only a few short minutes of playing. Hidden beneath minimalist and cartoonish graphics lays a game rooted around warring philosophies and heavily weighted decisions. Sure, as with most games, it is easy enough to waltz through, content to play the system and build to win. Prison Architect, however, is able to make a subtle play to the deeper thinkers and moralists. The overlying theme is Punishment vs Rehabilitation; with most of the decisions made by the player boiling down to these overarching concepts. Will the player prioritize space over comfort, spend valuable cash educating prisoners, or impose the death penalty? Each of these decisions will affect how you build your prison and ultimately, what kind of Architect you become.

Upon launching Prison Architect, the player is thrust directly into the campaign setting. Throughout this campaign, you are given a variety of tasks to complete within pre-constructed prisons, effectively taking the role of an architect in training. The campaign begins with a call from the CEO sets the scene and gives us the first task. This task: Building an execution room. At this point, the CEO does not give the player a choice. You are following the orders of your boss. To progress, you must build a room containing an electric chair with every intent of wiping an inmate from existence. To really drive it home; a guard relates the details of the inmate’s confession. His crime: killing his wife and the man she was having an affair with. Just for added punch; the condemned man turned himself in and confessed, leading to his incarceration. Do with that information what you will.

This period of play is when we realized that Prison Architect would deal with much more than ‘make prison good so bad people no make escape’. This depth is achieved through the many moral and ethical choices available and not least through artistic renditions (which are unexpectedly intense) of various scenarios throughout. Prison Architect does well to give a feeling of gravity to both the actions of the inmate; and the subsequent actions of you, the player. 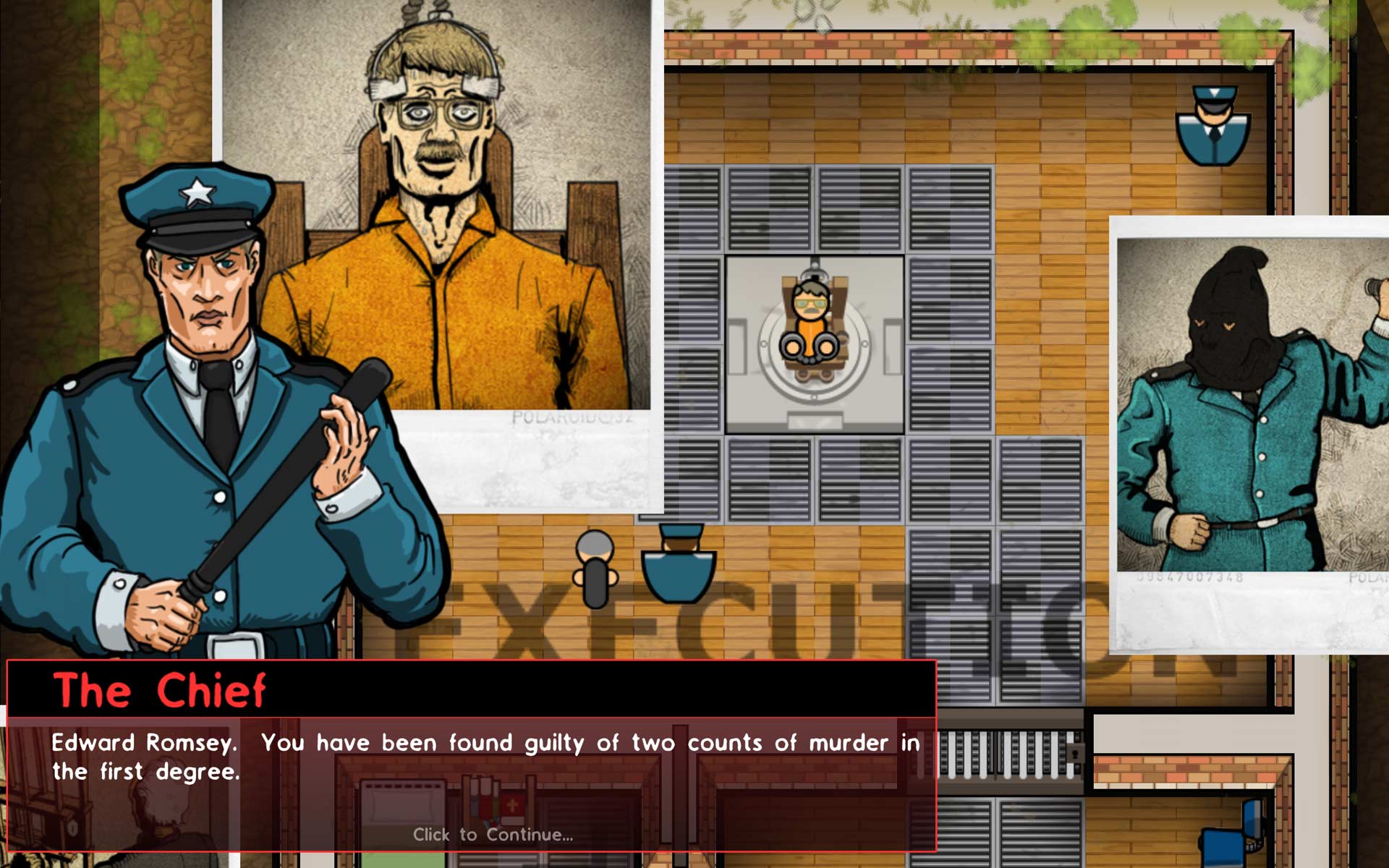 With that in mind; the prisoners are all a bunch of bastards. Sneaking off when given the slightest window of opportunity, or lining up a victim in the showers and viciously stabbing him to death when the guards aren’t looking. Utter pricks.

The cutscenes of Prison Architect come as a pleasant surprise. Effectively portraying a few interlocking (somewhat) stories in a way that gives some personality to a game that is otherwise quite sterile in the personality department. Apart from providing some necessary flavor, the cutscenes otherwise serve as a break from a campaign that begins to feel like a bit of a chore in the later stages. It is possible to complete the campaign quite quickly if one ignores the multitude of optional tasks given by the CEO. However, completion of these optional tasks makes additional story elements available. This forces the player into a difficult decision; grind through every optional task (some of which can take up to a couple of hours) so as not to miss anything; or skip them entirely since no benefit is gained by completing some and not others.

In our playthrough, we tried to complete a substantial amount of the optional tasks. As a result, we spent over 15 hours with the campaign. It was mostly enjoyable, however, towards the end; it really did feel like a slog. After completing the campaign, the player is given a chance to start from scratch; this is where the gameplay really starts to become enjoyable. Given an empty lot, with the option of creating whatever kind of facility one wishes, is a fantastic freedom after the relative restrictiveness of most sections of the campaign. 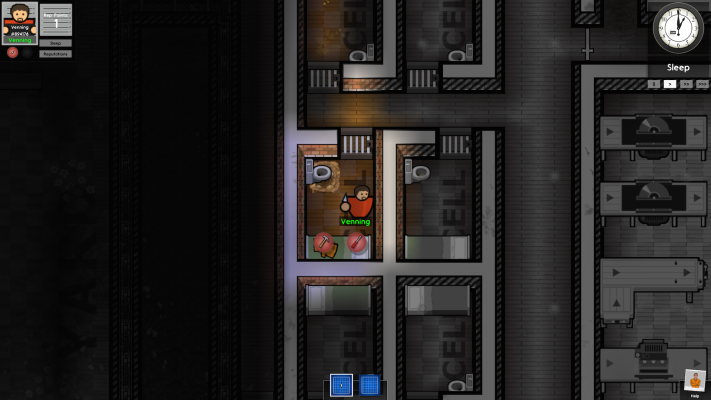 To help the player progress; a series of monetary grants provide lump sums of cash for reaching certain goals. From upgrading the prison’s security systems, to simply investing money to be collected later, these grants provide sufficient impetus for growing the prison into a well-oiled, rehabilitation machine.

This growth isn’t always as simple as it seems, though. Occasionally, certain things in Prison Architect just won’t work. There is usually a logical reason for this, but this reason can be entirely perplexing and influenced by something which seems completely unrelated. More than a few times, the player will find themselves looking at a job which will simply fail.  A message giving the number of attempts made by the relevant staff member is the only clue to said failure.  The rest is up to the player to figure out. While these failures are usually the fault of the Architect, it would be nice to have slightly more indication of what the potential problem might be. These problems are few and far between, though. For the most part, the development of your prison will be a smooth process; hampered only by monetary mismanagement and those freaking prisoners. 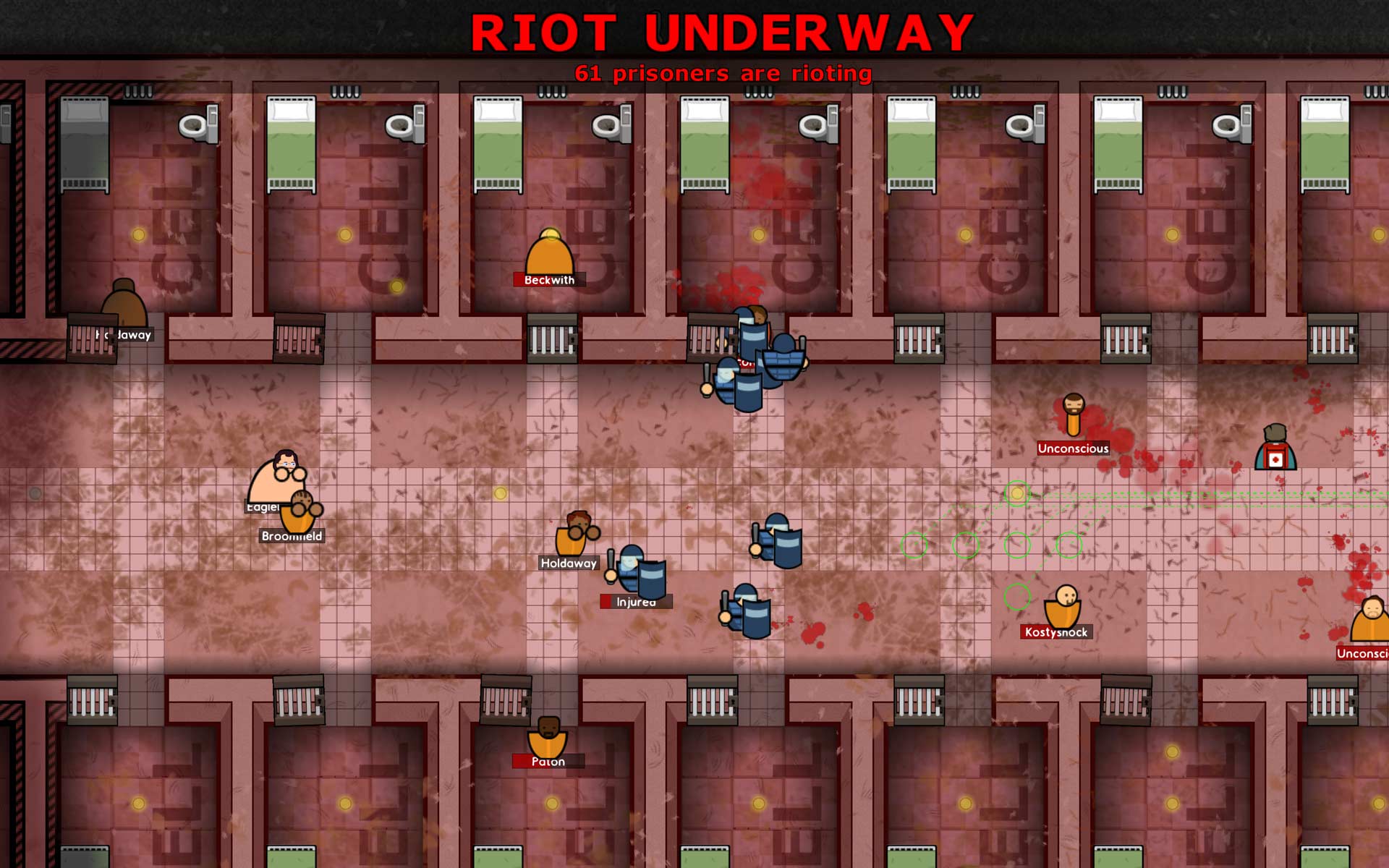 The majority of the time spent with Prison Architect is a pleasant one. There is always some way to improve your prison and issues that can develop from nothing will need quick resolution, keeping you busy. These issues can vary from random, pre-written events (an option that can be enabled before starting a prison) or from the developments in the natural sandbox environment. Whatever the case, Prison Architect never feels boring. Lastly, hidden in the ‘Extras’ menu is Escape Mode. Much vaunted before release; we were eager to get in there and take the role of one of those little bastards we keep complaining about.

Taking control of a single inmate, the player is tasked with —you guessed it— escaping.  At first, it seems like this can lead to endless fun. The variety of being able to download community made prisons to play, should make possibilities infinite. It is a pity that it doesn’t turn out as such. The player begins alone. A nobody in the system. The first aim is to gain reputation.  Reputation is acquired by being exactly what prison architects hate; a shit-stirrer. Breaking your cell toilet, punching cooks and starting fights will all add to your budding reputation as a bad ass. It isn’t all fun and games though, every fight caused and shower broken will lead to some form of punishment.  This usually comes in the form of a quick beating by the guards before a long wait in solitary (which can be skipped at the expense of a reputation point). 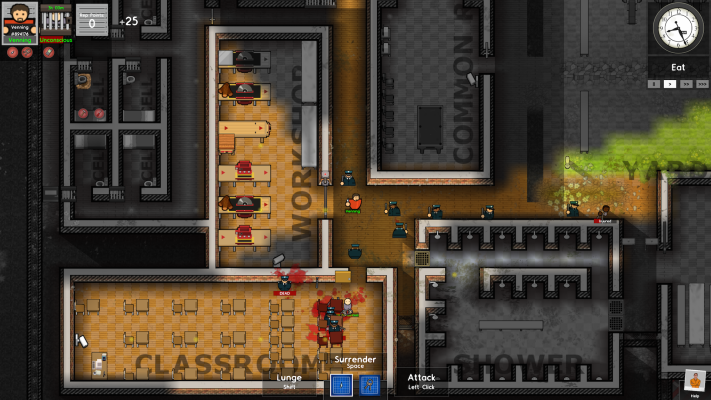 After causing sufficient chaos and subsequently gaining reputation; the player can choose to either upgrade his prisoner or recruit others into his gang. Prisoner upgrades include abilities like toughness and instigation. The latter is an interesting concept; giving the prisoner the ability to influence other inmates to join whatever ruckus is created; giving the potential for riots a significant boost. Recruiting is also reliant on reputation. Recruits are priced dependent on what skills they already possess and how many members have already been recruited. Each gang member recruited can then be upgraded in a similar manner to the starting character. In fact, that manner is identical. No prisoner has unique attributes; not even the starter. This causes a complete lack of personality from the inmates. It is hard to care for a character when he is a carbon copy of those around him.

Disappointingly, what seems to be a very promising model, fails to be interesting beyond the first hour or so. Very limited when it comes to the variety of escape attempts; either tunneling (through the toilet, yuck), sneaking, or rioting out of the prison. It doesn’t take long before you see it all. The lack of differentiation between characters also makes for a flat experience overall. Don’t take it the wrong way; the first hour or so is fun.  It just gets a bit grating after that. Overall, Escape Mode feels like a mode added in the last minute.  Perhaps in response to the recent game The Escapists. Either way; it acts as a pretty fun, albeit brief, diversion. 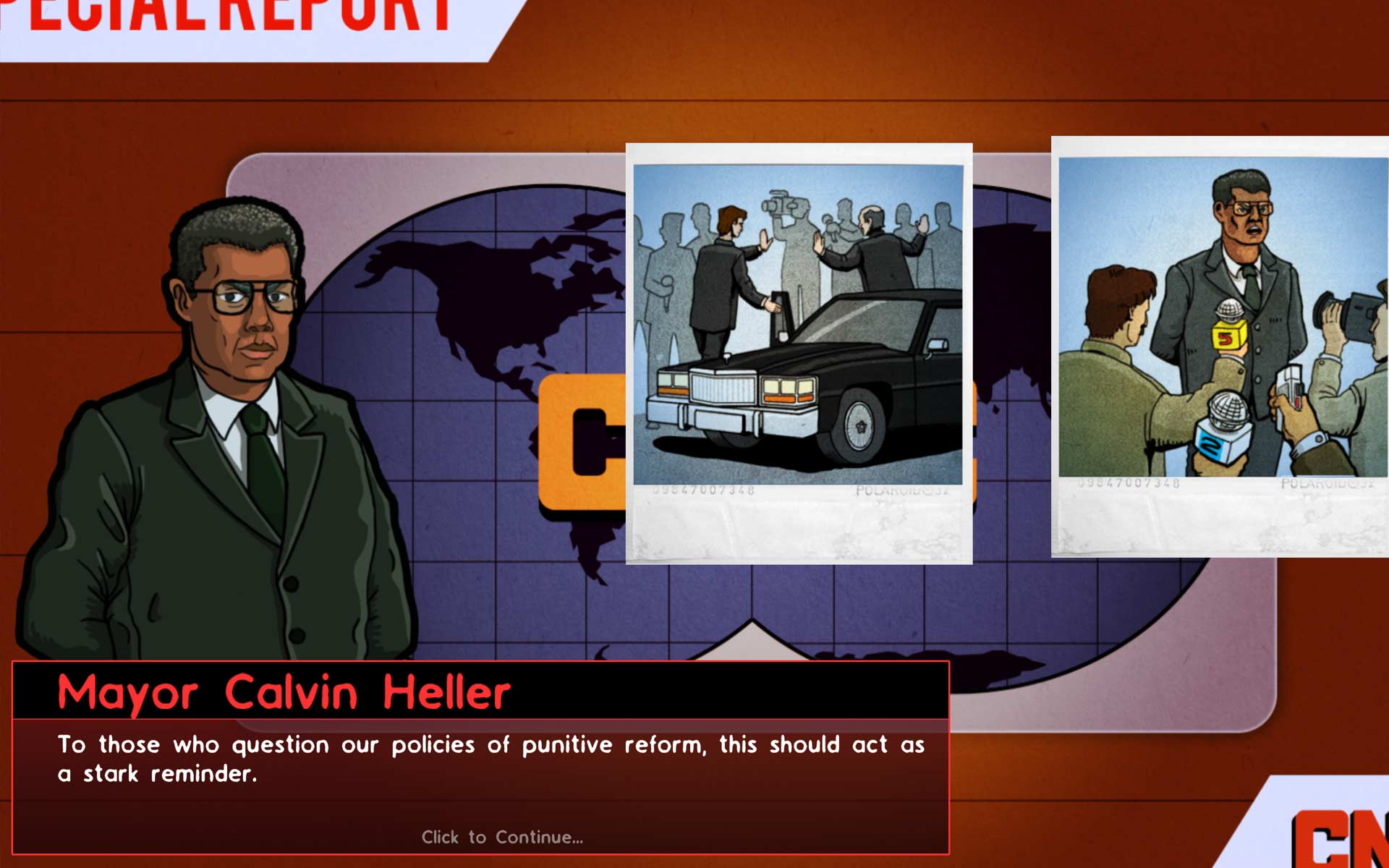 Prison Architect is a genuinely fun game that makes you think in unexpected ways. Apart from some slight campaign fatigue and an Escape Mode with plenty of potential but poor execution, it’s hard to put it down. A surprising depth of character draws you in and a depth of gameplay that keeps you there. If you love the Tycoon style of game then this is definitely for you. If that’s not your thing, then give Prison Architect a go anyway, you will be pleasantly surprised. Until you realize that it’s 3:23 am and you have work tomorrow, at least.