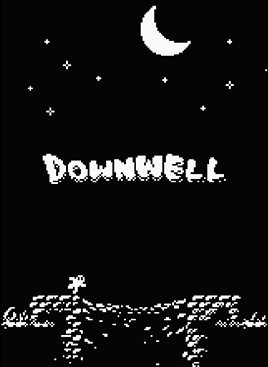 Most wells are designed with a single purpose in mind.  Drop down the classic bucket and pull up a cool, refreshing draught of water and all is good with the world.  Or run a pipe to the house and live free from the city’s water grid.  Whatever works, really. The point is, wells are water-giving nurturers of life, and not monster-infested bottomless pits to jump into armed only with a pair of guns on your boots.  Fortunately, Downwell is here to correct this unfair deficiency.

Downwell is an arcade action roguelike about a kid who decides to go exploring Down a Well.  Armed only with a pair of gunboots and whatever new abilities he can scavenge along the way, he needs to jump, shoot, and fall through the near-endless depths, maybe reaching the bottom if things go really incredibly amazingly right.  Odds are by no stretch of the imagination in his favor, but like all the best arcade games it’s merely very difficult rather than impossible.  It’s also, in the best arcade tradition, a study in having as much fun as possible using as little as possible. Downwell is almost an exercise in gaming minimalism, not quite on the scale of Super Hexagon but from the same school of design.  Every little system and detail ties in to the movement of dropping down the well, shooting or stomping the enemies along the way, and keeping on top of a situation that can rapidly speed out of control.  Between the pull of gravity and the incredibly zippy lateral movement it’s easy to crash into or overshoot an enemy you meant to stomp, but with a little experience you’ll learn a number of tricks to keep the momentum under control.

The gunboots are a weapon with two abilities, only one of which is for offense.  Their initial shot is an 8-round pistol, and due to the guns being strapped to your feet every single type of gun shoots downward.  The laser only has two shots but packs a mean punch, the shotgun and spread guns cover a nice area, the machinegun has a higher ammo capacity, etc.  Landing reloads the gunboots, and by a happy loophole stomping on an enemy counts every bit as much as touching down to earth.  The side effect of firing is a brief hover in mid-air, meaning that initially the weaker but higher-capacity guns are the way to go for the tiny moment of breathing room from the mid-air pause. It only takes a few games to get the hang of shooting to gain some mid-air time, aiming for an enemy to stomp to both take it out and reload the gunboots, and then move on to the next. 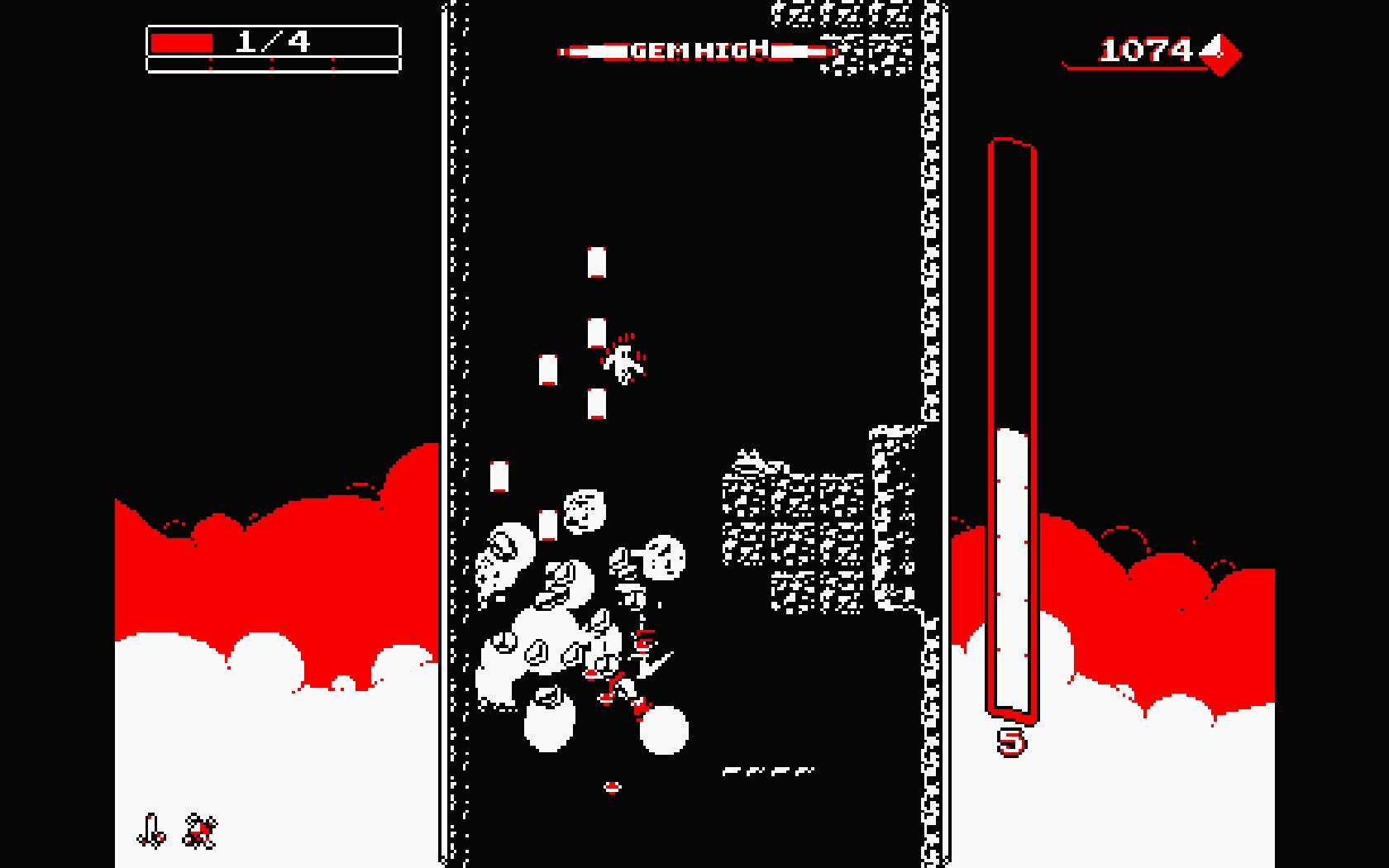 An uncontrolled descent is a great way to cover ground fast while missing every scoring opportunity available, sacrificing gems and kill-combos for distance, but also risks landing on something painful and unpleasant.  Downwell won’t penalize you for speeding down the well without a care in the world, but it will kill you dead if you’re not careful about it.  A little control goes a long way, and shots are as useful for blowing away spiky enemies as they are for keeping the descent under control.  Even with a careful drop, however, the level’s end doesn’t take too long to reach, and then you get to choose a new power-up.

At the end of each level is a choice of three abilities, and the one you pick stays with you for the duration of the game.  Getting more health is nice, but having each gem collected also shoot a bullet straight up can be fantastically effective when you’ve got an enemy below your boots and another closing in from above.  The knife & fork ability lets you eat the bodies of defeated critters, occasionally granting a +1 to health, while another ability causes stomped enemies to explode.  The ability list is relatively small for this kind of game, only about 25-ish (give or take), but each one’s effect is carefully tied in to the gameplay flow.  No matter how far you get you’ll never get so crazily overpowered that the game becomes a pushover, even with a gun drone and both collected gems and destroyed blocks causing bullets to fly everywhere.  It’s great fun when that happens, of course, but the best combos happen when the chaos is a bit more under control. 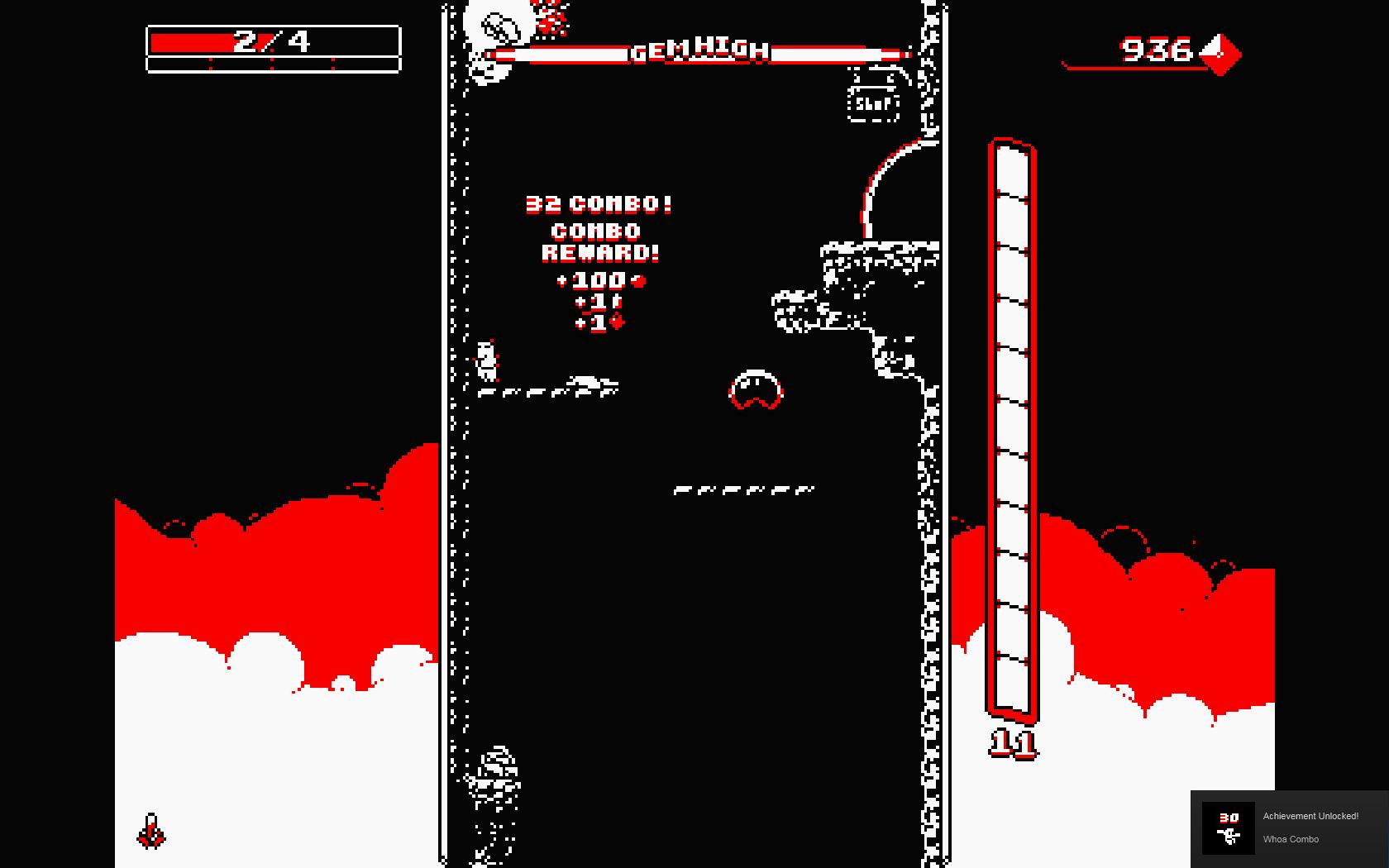 While there’s no score in Downwell, there are gems, and they act as currency both to unlock new features and buy items at in-game shops.  Defeated enemies drop a few gems, as does the occasional breakable stone block, but combos are the way to seriously rack up the gem count.  Every enemy killed without touching the ground adds +1 to the combo, and any combo over 8 earns a 100 gem bonus.  Bigger combos also earn energy and health, which can definitely come in handy, but the 100 gem bonuses quickly add up and make the infrequent stores much more rewarding.  Health isn’t cheap, after all, and you’ll be needing every bit of it you can get.

One of the more interesting wrinkles in weapon distribution is actually tied to health, in fact.  Each level has a few caves scattered about, with a bubble in front that, once you enter, stops time for as long as you’re in there.  Run across a cave with a 20 combo?  Land in the time bubble and the combo counter stays active until you leave, preferably by jumping into the air rather than walking over the combo-breaking ground.  The cave leads off-screen to a cavern with a random weapon change inside, and as often as not the gun also has a health-up tied to it.  Really like the gun you’ve got but also are down to a single health point?  It can be an evil choice, but Downwell rarely lets you get too comfortable with any single method of playing for very long.  A single round can frequently have you switching up between several styles of play, depending on weapon availability, monster distribution, and whatever abilities you find at level’s end. 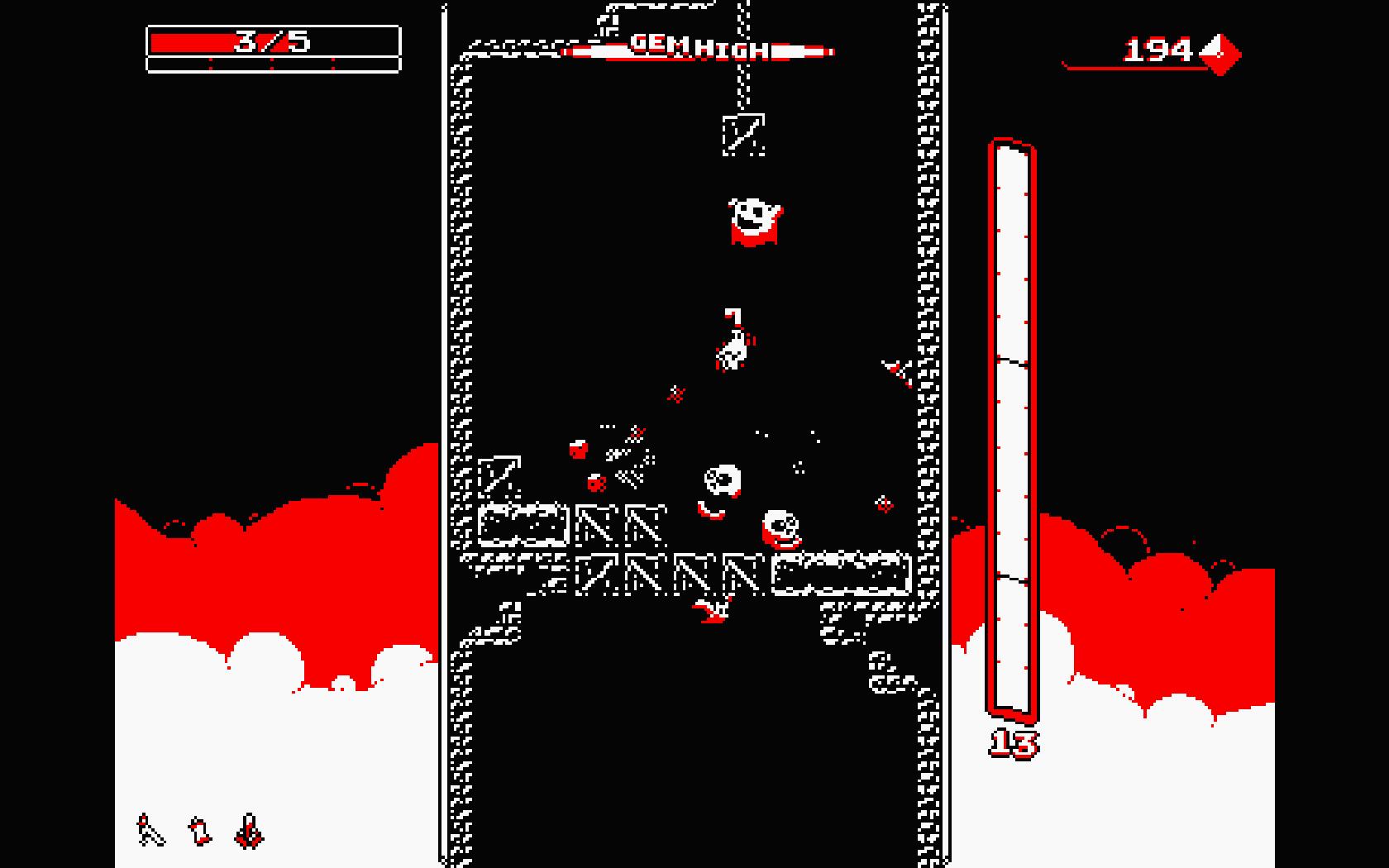 Downwell is a fantastic arcade game from the ’80s transplanted into a modern-day computer.  The pixely art style and minimal color palette reinforce its influences but the animation and number of different moving parts on screen at once are nothing 80s hardware would have been able to keep up with.  The interlocking gameplay elements are far smarter than they look at first glance, teaching you how to play and get better while also not being shy about killing you dead.  It doesn’t take long to learn a favorite gun and set of powerups, but nothing is useless, so making due with what you find not only forces you to adapt, but also learn to advance.  It’s a deep dark well filled with monsters and gems, equal parts platformer and reverse vertical shooter, and falling into its depths is the stuff that 1980s arcade dreams were made of.