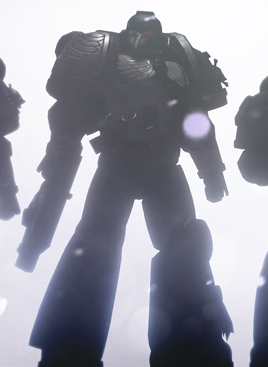 Native PC gamers may not be familiar with the efforts of mobile developer Rodeo Games and their predominantly successful foray in making strategy games set in the Warhammer 40,000 universe. Known for producing a high level of visual fidelity and polish, Rodeo Games has consistently delivered good-looking and solid games to tablets and phones. So, if anything, it makes a little sense that their latest Warhammer title, Warhammer 40,000: Deathwatch – Tyranid Invasion, would come to Steam as the upgraded Warhammer 40,000: Deathwatch – Enhanced Edition. While it still plays and feels like a mobile game, it does also hold up reasonably well as a PC strategy title in its own right.

Working immediately in Deathwatch’s favor is the rich Warhammer 40K lore. Players take charge of a growing array of Deathwatch Space Marines. Hailing from a variety of different other Space Marine chapters, Deathwatch marines are elite soldiers who hunt and kill xenos – another name for non-human aliens. The background lore, and the different chapters each of the playable units come from, can come into play for specialized gear qualifications and occasional in-game banter. The bad guys this time around are the Tyranids, alien creatures of different shapes and sizes who travel the stars in bio-mechanical monstrosities called Hive Ships. Aside from that, the context of each mission only appears when the level objectives are laid out at the start. The units show a nice variety in design and detail; former Blood Angels have red armor, and veteran Space Wolves are clothed in furs. The different units occasionally have something to say to each other, often displaying their zealous, battle-hungry bravado. The banter does wonders in selling the different units as characters, rather than metal statues with guns. It’s just too bad that there’s so little banter, and that what’s there gets repeated too quickly by different units. That said, all dialogue is voiced and plot-related text in each of the game’s acts grounds the levels in the context of an ongoing war.

As a turn-based strategy game, Deathwatch is more trimmed down than what a PC strategy enthusiast may be used to. Missions play out with a five-man “kill team” on maps divided into a series of square tiles. Though it’s easy to see a similarity with games like XCOM: Enemy Unknown, Deathwatch’s maps are small, offering no verticality but still managing to stay interesting thanks to a fog of war. If a unit’s line of sight does not include a part of the map, then that part is hidden. This is great for the small size and especially nice in indoor missions where there are walls and structures all over the place. Basically, in most situations, it can be difficult to tell where the enemy might come from. The AI does pretty well lurking in the shadows and spawning from unseen corners and crevices. As such, the go-to advancement strategy is to keep close and advance slowly, stacking up at corners and watching your six. 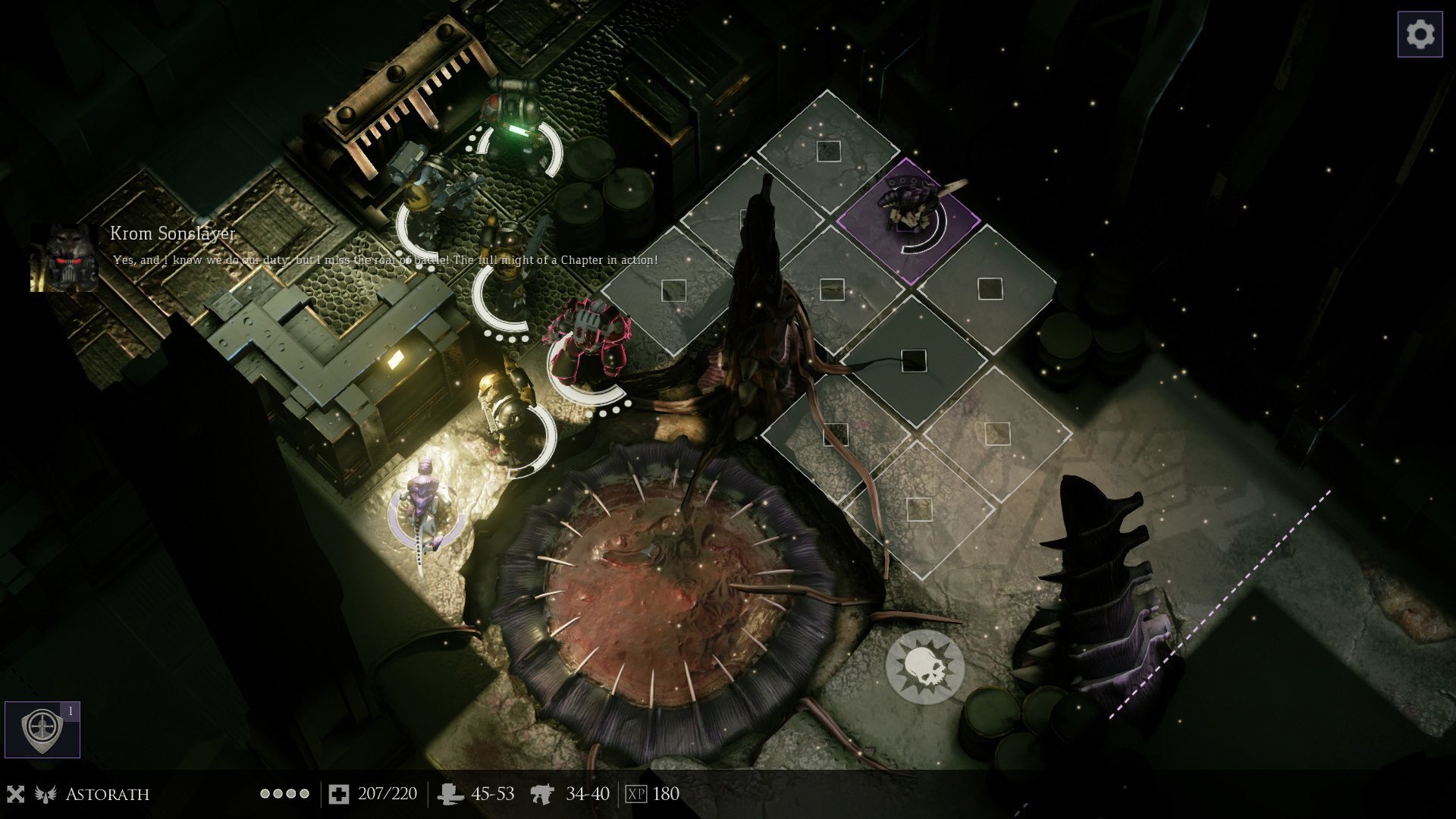 Of course, different units have different abilities, but most of the game is spent using the actions they all share. Every unit can adopt a familiar “Overwatch” stance where they aim at a specified area and shoot at anything that comes into their line of sight during the enemy turn. Given the fog of war, the size of the maps, and the quickly established precedent of being outnumbered, Overwatch never stops being useful. Every unit starts out with four Action Points (AP) which replenish at the beginning of each player turn. Each square of movement costs one AP, and different weapons cost different amounts of AP to fire. This means that every move is best made deliberately from the get-go. Since AP boosts are rare or time-consuming to obtain, the vast majority of units are virtually stuck with the same four AP they started with. This makes every single point of AP important. For example, activating Overwatch actually costs one AP, so standing guard costs two AP in total: one point for activation and the other for actually shooting. To top it off, the map size makes a single square of movement surprisingly important and kills never stop feeling satisfying.

Needless to say, the AP allotment comes into play with the game’s balance. Devastators have heavy weapons, which cost more than one AP to shoot, so it’s normal for them not to move at all. Instead, their fire power is superb and they can make short work of nearly anything if they’re positioned in the right place at the right time. Some marines are close-combat specialists and use chain-swords or power fists to deal high damage at melee range. There is no way to take cover or increase defense so melee units offer the risk-reward style of play, acting as less restricted units but also as the most banged up. Though most enemies tend to be of the melee variety, they do match the Space Marine units in functionality. Many will scurry up to the nearest Space Marine and hack at him, but later missions feature tougher, harder-hitting Tyranids with a variety of abilities and firepower. The enemy turn can be sped up and the combat escalation comes as quick as it should, keeping things from getting too dull. If the kill team doesn’t mobilize or lay down a good deal of suppressing fire late game, they can get overwhelmed and flanked. Meanwhile the fog of war could lead less cautious players to step right into an ambush, and the low cap on AP could see them stuck there for the enemy turn. It’s a shame though that enemy variety isn’t that great, there are enemies that work best at the different ranges and then more gimmicky ones who can deal a heavy amount of damage to a unit in their line of sight if they don’t move. But eventually tougher close range Tyranids just replace the mobs from early game while long range Tyranids with heavy weapons replace the ones with pistols.

Likewise, the game is basically the same from start to finish. Though there are missions that shake it up, like an early game one that spawns one Space Marine on the other side of the map, too many missions come down to just surviving waves of enemies. While the heavy amount of killing is very important for unit progression, this also means that having just one working strategy is pretty much viable for the entire game. It doesn’t help that units don’t die permanently if they fall in combat, they just lose their EXP for that mission instead. Granted, permadeath would make it too easy to get irreversibly stuck and there are still three difficulty levels with the last one unlocking more capable “elite” enemies. So while Deathwatch does have strategic depth, it just isn’t very complicated and it doesn’t encourage a change in strategy or long-term planning. The game is not short and it doesn’t drag on either. But throughout it, the challenge never changes – it just stiffens. Even if it’s easy to pick up, Deathwatch’s missions have trouble being exciting.

On the other hand, units can level up and get newer, more powerful equipment to even the odds as the missions get harder. The equipment and units alike are presented as cards, and at the end of a mission the player is awarded a random card and requisition points. The cards come in four rarity levels. Beating an act of four missions will net a pack of three cards which always contains something that is at least rank two in rarity. 100 requisition points can be used to purchase a pack of three cards as well. Rarer, higher ranking units will start with better base stats than lower ranking ones. Killing something nets everyone EXP, giving the unit who landed the killing shot extra EXP. 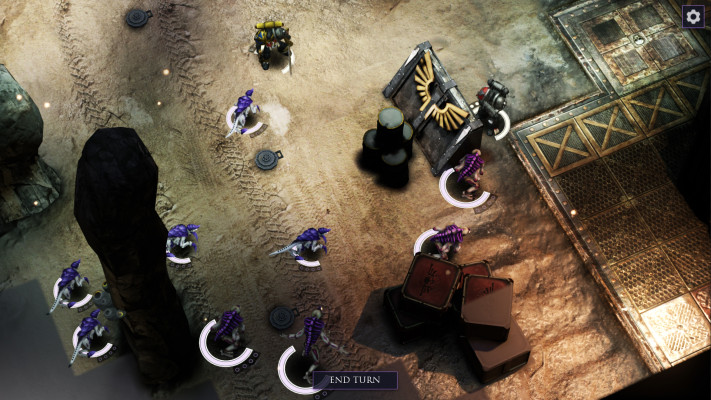 EXP is then either spent directly on increasingly expensive unit stats like HP, accuracy, critical chance, or a variety of flat-cost but expensive unit-specific abilities and equipment slots. Sticking with the same kill team definitely gets rewarding this way, as special abilities are almost all useful. The best part is a special ability doesn’t use AP, and neither does secondary equipment. So a devastator could expend all his AP unloading into an enemy unit, but then still throw a grenade at it afterwards. In this way, leveling up a unit only gets better as the game goes on and the player’s armory expands with more card packs and mission rewards. Higher ranking units are sure to come up in packs as well, encouraging players to change out the members of their kill team without making huge sacrifices in effectiveness. Guns don’t have level requirements and balance themselves even between different rarity levels. For example, a powerful plasma rifle has a chance of overheating with each volley, while painful single-shot melta rifles have low accuracy. All together, building up a lethal kill team plays a big part in keeping the game fun.

Deathwatch’s visuals may be the most polished out of all of it, however. Rebuilt with Unreal Engine 4, the game’s lighting and particle effects are a nice treat, even given its somewhat droll color palette. The polygon count isn’t that high and the textures do not hold up when up close, but none of this really matters when the whole game is from a top-down perspective. It’s a pretty enough game and also easy to run. While load times are a little long, there were occasional audio bugs and one instance where the enemy turn did not end, prompting a restart of the level. Otherwise, the game runs smoothly as well. 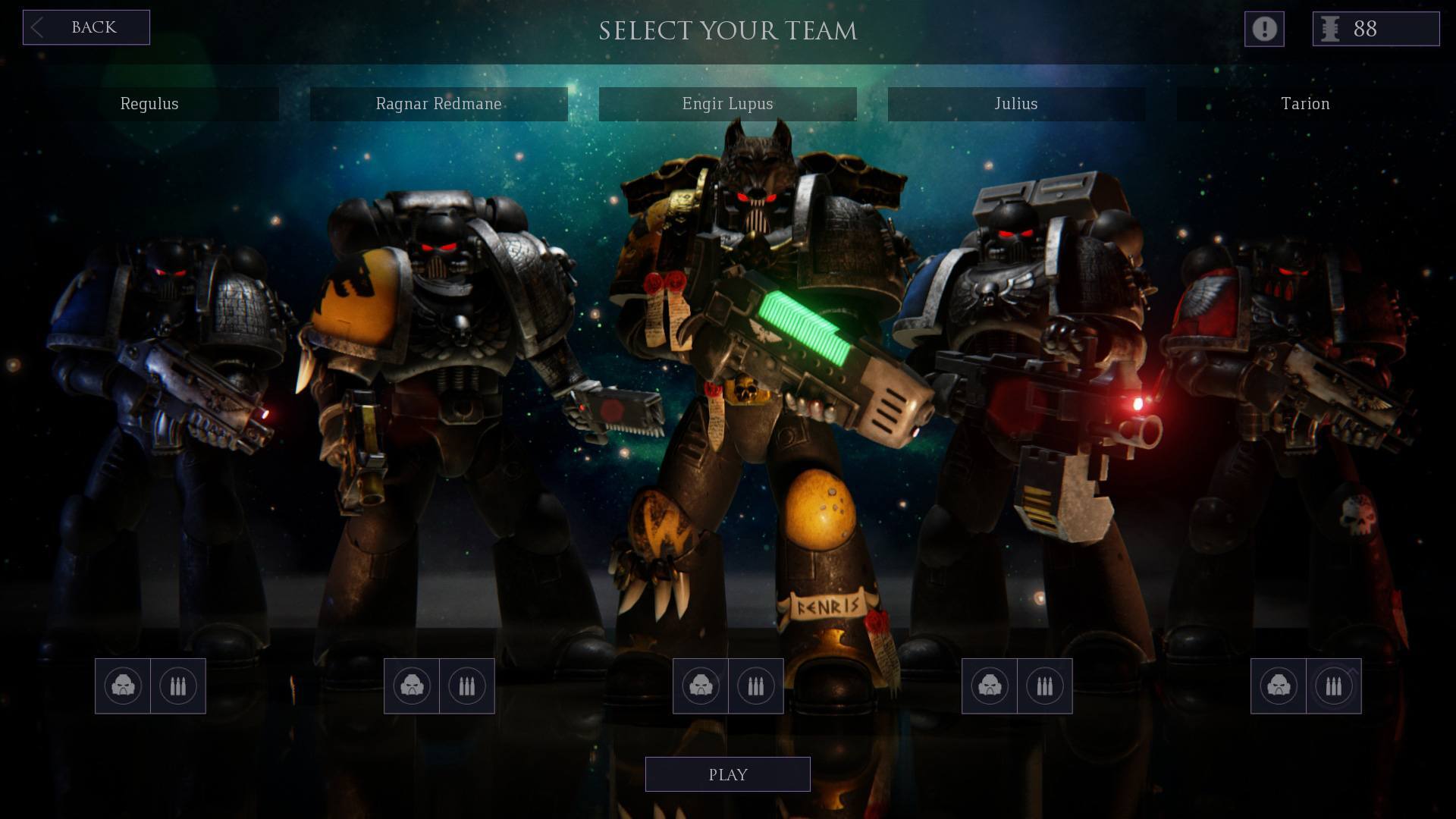 While not a complex top-down, turn-based strategy RPG, Warhammer 40,000: Deathwatch – Enhanced Edition does a nice job of laying a solid groundwork from the beginning in tactical options, challenge and character progression. Even if this groundwork never truly changes or improves, it doesn’t stop the title from delivering an enjoyable strategy game for the most part. While strategy game veterans may find the variety of challenge and options lackluster and have trouble keeping engaged, it does well for those wanting to hop in for a couple missions of light strategy every once in awhile and is quick to reward them for doing so.