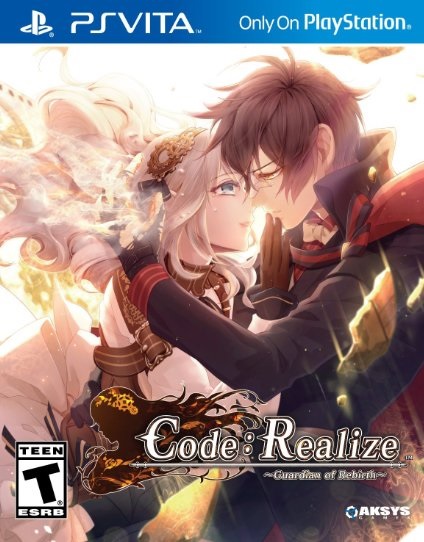 The visual novel market has exploded over the last eighteen to twenty-four months. And with heavy hitters like Clannad and Muv-Luv still waiting in the wings for a release, it doesn’t look like the genre is going anywhere any time soon. Instead, it would seem that larger publishers are getting behind localization efforts for these types of titles. Aksys Games is one of those companies that are helping to bring the historically Japan-only niche to wider audiences here in the West. On top of that, studios seem to really be focusing in on which systems are the ideal platforms for these kinds of experiences. Thus far, the PC and Vita are decidedly the go-to consoles for visual novels, at least here in the States, and the release of Code: Realize ~Guardian of Rebirth~ is not breaking from that mold. As a Vita exclusive, this sizable visual novel from developer Otomate sets itself apart well from the rest of the pack, which is important as the market fills up with like-games.

Code: Realize ~Guardian of Rebirth~ takes the traditional visual novel experience — of one male character interacting with a host of potential female suitors — and turns it on its head. As an otome visual novel, Code: Realize‘s star of show is in fact a female character by the name of Cardia. As a young girl who has been locked away in a mansion by her father, and left in complete isolation due to a condition she has that poisons anyone who touches her, Cardia’s tale is one of cultural discovery and self-exploration as players follow her on her journey of finding her father and seeking answers to the many questions she has. Due to the general nature of visual novels, over the course of Cardia’s quest players meet and have the opportunity to court various male characters–though there is a caveat here. The men she meets are all characters from classic literature. Sherlock Holmes, Arsène Lupin, Abraham Van Helsing and Victor Frankenstein are just a few of the famous “faces” players will meet along the way.

The very inclusion of these characters sets the tone for Guardian of Rebirth quite well. This is not a visual novel that takes itself too terribly seriously, yet at the same time, never devolves into eye-rolling comedy either. Instead, the storytelling here is one that finds a nice cadence of getting down to business while also knowing when to throw in a joke or light-hearted moment to keep the experience compelling. It’s thanks to the superb writing and characterizations that ultimately make this a real page-turner of sorts. Each cast member has their own unique personality that comes through either in certain body language quirks they show, dialect, or just their general agenda in Cardia’s endeavor. Like any good visual novel, these diverse characterizations are brought to light through their interaction with Cardia and each other. At times, characters can feel a little archetypal, but for the most part they manage to stay away from overused tropes; though when the writers do go down that route, the tropes are handled in interesting ways instead of the usual “here we go again” way. 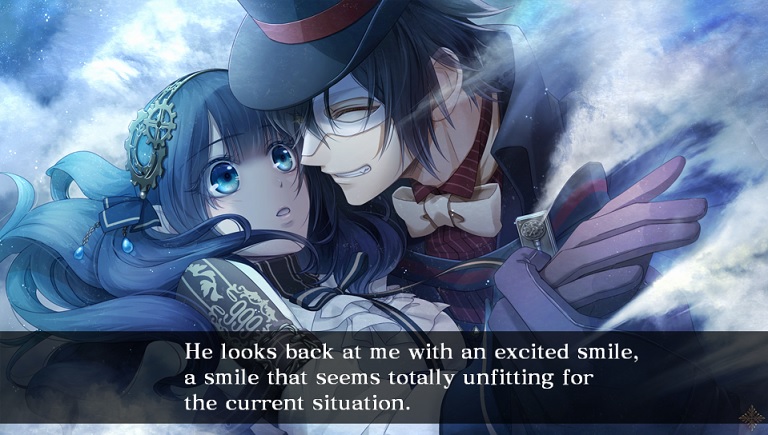 Truly the story is fairly zany. Even in its tame, more tender moments, its silliness is hard to deny. Though its humor is never dolled out self-referentially or in poor taste, seemingly knowing how to weave a tale that manages to hit many peaks and valleys, be them comedic or serious. Much of this is due to solid prose and dialogue that bring the tale to life. It’s easy to get lost in the game’s many moments of grandeur when the world- and character-building are done so with a great deal of forethought and sharp writing. If there’s any one particular barrier to Code: Realize‘s enjoyment factor, though, it’s the pacing. While nearly all visual novels take their time in crescendoing, Guardian of Rebirth is especially slow to do so. While the game actually starts off with more of a bang than many of its kind, it quickly slows to a trot then a walk, and sometimes even a crawl, from its dramatic opening minutes before ramping things back up.

Thankfully, the pacing issues are mostly confined to the opening hours and don’t override the characters and the story they have to tell, which is wonderful. Cardia especially is a sympathetic heroine who truly is tormented, not only by the malady that plagues her and has practically made interactions with other people all but non-existent, but also by the struggle of finding her father to get answers she seeks. There’s a real sense of attachment the players get to her over the course of the very lengthy story. One doesn’t need a disease that melts others into a pile of blood and goo just by touching them to relate to her plights. We’ve probably all felt burdened by some kind of ailment, or felt like a burden on someone else because of one. It’s in this shared, universal experience that her pain is so vividly empathized with. The characters around her also help bring her story to life by their own histories and hangups, ultimately giving us a tale that, while fantastical, is one rooted in the plights of the human condition. 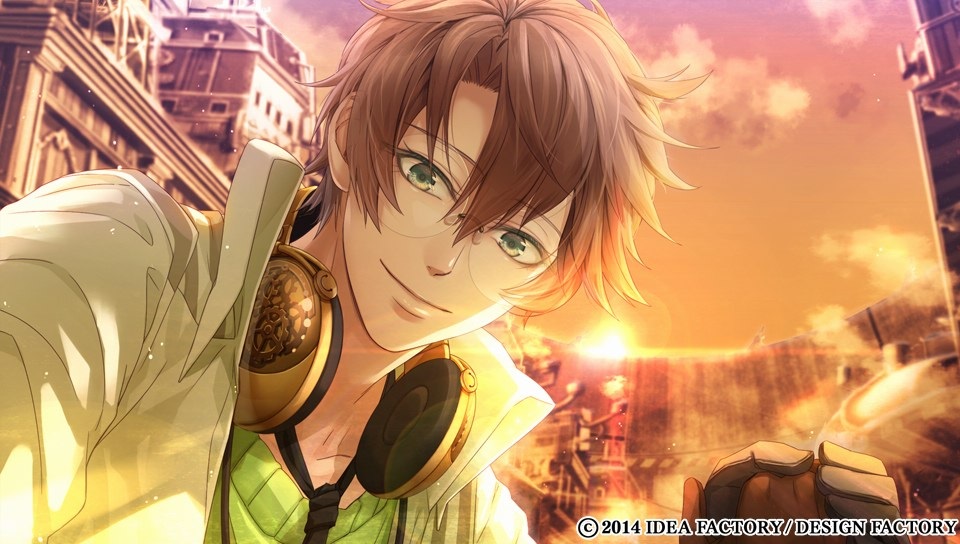 What’s more is how Cardia develops as a character. She starts off as a scared, nearly lifeless girl who has only really ever known the sound of her own thoughts, to someone who overcomes adversity so as to boom with life and love. It’s heartwarming to watch her transformation take place over the course of the game. Although the male characters don’t develop as fully, they too see growth throughout the journey. And seeing how each character changes individually but then also how those changes impact the ones around them makes for a story that feels dynamic and ever-changing.

Another primary character of the game is the steampunk world in which Guardian of Rebirth is set. To see this Steampunk version of London and outlying locations really adds to the sense of wonderment. And seeing as the events of the game play off of both real-life and alternate history elements, there’s a delightful blending of two worlds to create a single, shockingly cohesive one. There’s even a glossary in the game that is often employed to describe historical sites, figures, and events, serving to help flesh out the game world while also educating players on world history.

Code: Realize ~Guardian of Rebirth~ isn’t a kinetic visual novel, for those wondering. There are choices that the player will make, though they’re not in abundance. Since Cardia can forge relationships with the men around her, there are a few instances of choosing how she interacts with them. Naturally, this means that the game has multiple endings depending on the decisions made. It should be noted though that, unlike other otome visual novels, this one isn’t a dating sim. There are moments in which Cardia will have a choice about how she will respond to one of her male companions–and the circumstances may have some romance attached to them–but that’s about the extent of the “dating sim” aspects. 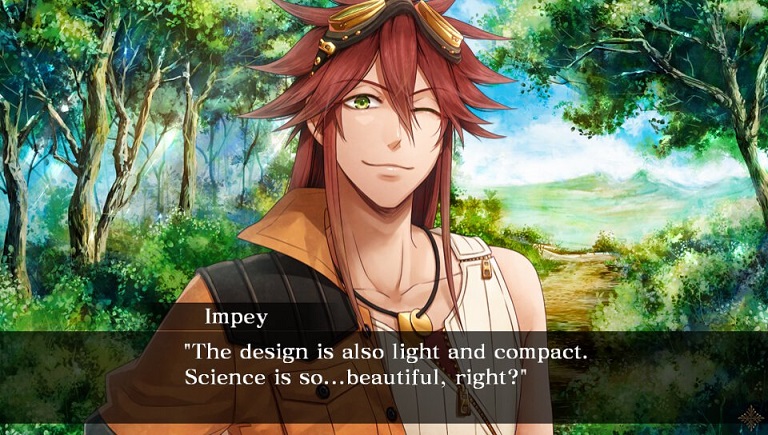 Nevertheless, because player-choice is represented here, it’s a god-send that the developers have included a handy “rewind” button that can be enacted at any time. Flicking the left thumb-stick allows players to scroll back through text, replay any audio accompanying their pinpointed dialogue, and/or go back to a decision-making situation and easily see the outcome of said choice. It’s a small mechanic, but one that needs to be present in more visual novels. If for nothing else, this feature is great for when folks have put long periods of time in between their play-sessions; with it, they can quickly scroll back through some conversations to refresh their memory on their place in the story, before getting right back into things.

And re-scrolling through some dialogue may be a necessity at times, primarily toward the end of the game, because there are more than a few typos that made us stop and scratch our head. It’s surprising to see this be such an issue with Code: Realize when its overall presentation is absolutely top-notch. But some of the localization work does drop off a bit in quality during the last leg of the adventure. Between the misspellings such as “Wotcha” instead of “Gotcha” and the confusing, even sometimes jarring, slipping in and out of past- and present-tense at inopportune times, sometimes makes Guardian of Rebirth a less than perfect reading experience. Since these issues are seen more frequently at the end, we’re presuming that the QA crunch got the best of the localization team who still clearly needed a bit more time to iron some grammatical kinks.

On that topic of technical fidelity, let us say that Code: Realize is a beautiful game, both visually and aurally. If visual novels could be considered Triple-A productions, the art and audio here would be just that. Backgrounds are lush and re-used sparingly, new scenes are cut to at all the right times so as to not bore or overexpose any one particular setpiece, clever manipulation of static images are used to create scene movement, character art is imaginative with clean line work, and the soundtrack sounds right out of a JRPG or anime. Bouncy tunes, melodic ones, and dramatically fast-paced rock jams are all cycled through with great direction and breadth. The game is just so vibrant from all angles that we would nearly make this a must-play for genre fans just so they could lay eyes on its beauty. And with the Vita’s color and resolution fidelity, the whole thing becomes a real feast for the eyes. And it looks even better on a television because the game is PSTV compatible. 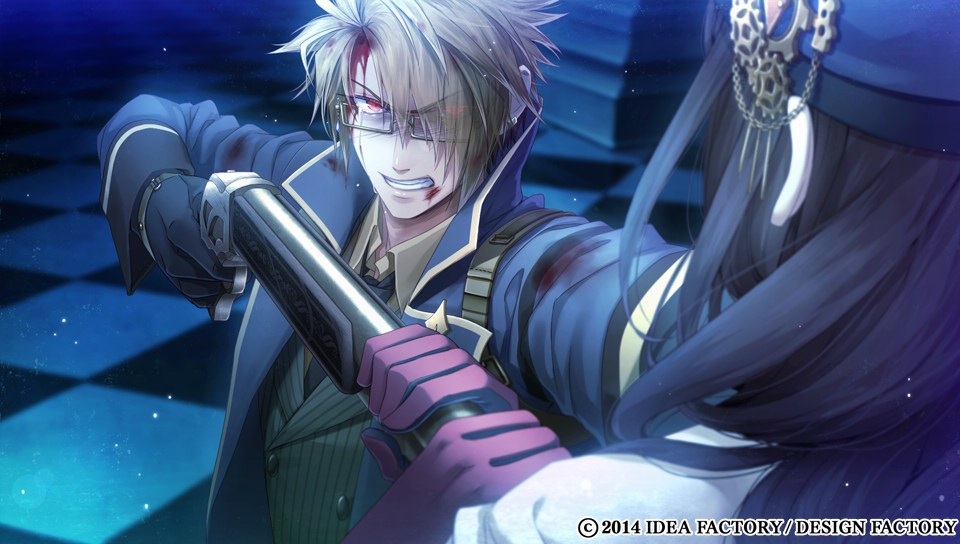 Code: Realize ~Guardian of Rebirth~ is an excellent story with creative, likable characters. Its cast is varied, unique and wholly interesting, with heroine Cardia stealing the show. Its eloquent characterizations and lengthy story are only rivaled by that of its presentation values which should be the standard-bearers for all visual novels going forward. There are some hiccups in the areas of pacing and typos, but these issues don’t have much of an effect on the overall experience. In the end, Code: Realize is a spectacular visual novel and one of the best, if not the best, of the year. If you’re a fan of the genre, buy it. If you’ve ever been curious about the genre, this is just as good as any of the classics those in the know might recommend.