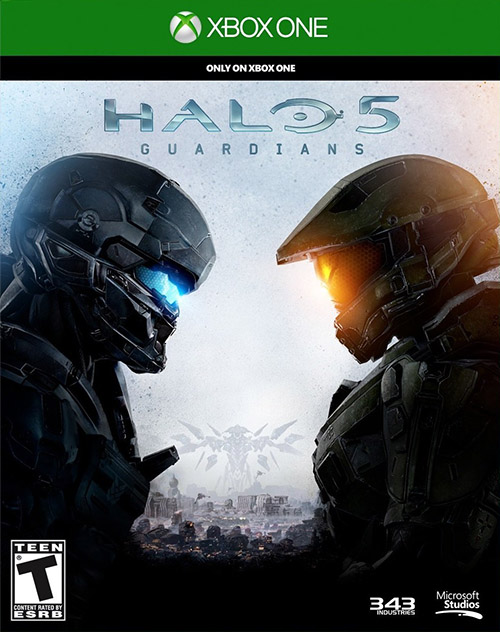 Easily the most iconic video game character under Microsoft’s banner is Master Chief. Ever since his debut in 2001, Master Chief and Bungie have been able to propel the Xbox brand further than anyone would have anticipated, ultimately resulting in some of the best advancements in video games today. Moving forward to 2015, we now have the fifth mainline release in the franchise and the first new Halo title to grace the Xbox One. While last year’s The Master Chief Collection was met with high praise from critics around the world, when the servers ultimately became accessible to the public, things began to fall apart. It was one of the biggest blunders in recent memory, essentially tarnishing the reputation of the Halo series thanks to some unfortunate server issues. We chalked it up to 343 Industries taking on far more than they could handle, trying to merge four online connected systems into one, but as one would expect, many are going into Halo 5: Guardians from a safe distance, hoping that history will not repeat itself.

Since its reveal at E3 2013, Microsoft Studios has been hyping up the concept of Master Chief going rogue, being a lone soldier while another is hunting him down. They even went as far to create multiple promotional videos showing Master Chief and Spartan Locke essentially killing one another, with a tribute trailer being released closer to the game’s launch that martyrizes the long running protagonist. It’s a shame to report that this concept is a little anti-climactic, amounting to an abrupt moment at the end of the second mission where Master Chief disobeys a direct order from a superior officer, which then consequentially has Fireteam Osiris, led by Locke, being tasked with tracking down and bringing back Blue Team. The result is unfortunately a cobbled together, throwaway story that doesn’t help expand the Halo universe. It’s a straightforward and almost dormant plot that only gets going in the last few missions. In Halo fashion, as soon as events begin to make sense and the plot becomes clearer, it leaves things off to be finished in what will likely be Halo 6. At the very least, combat scenarios are enjoyable, and in typical Halo fashion have three warring parties (this time Humans vs. Covenant vs. Forerunners) fighting one another, even though it all does feel a bit too formulaic. 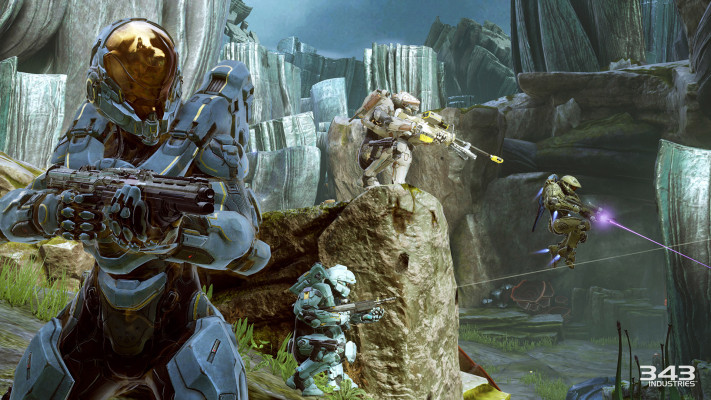 That’s not to say the single player campaign is boring, as it contains arguably the most exciting cinematics seen in any Halo title, it’s just the motivation and core reasoning behind the two teams seems far too vague and not touched upon all that well. That’s not even the worst part, though. Those expecting to play as Master Chief in another exciting adventure will be disappointed to learn that John-117’s role in Halo 5 is minimal. While he’s the driving point of Locke’s side of the tale, through the fifteen mission story, players will only be able to take control of Master Chief on three separate occasions. The remaining twelve missions are dedicated to Spartan Locke, as if Bungie was trying to set the stage for a new protagonist who is, as said before, underdeveloped. It’s not even really twelve missions, either; it’s closer to nine considering three of them are brief intermission pieces where Locke just has to talk to one or two individuals in a camp or settlement in order to progress to the next piece of the story. It serves as a link between events, but ends up break up the flow of the fast paced, high octane combat.

343 Industries was able to replicate the award winning formula Bungie accomplished in the past with Halo 4, but it wasn’t the major leap we were hoping for. They took a lot of the same formula and lightly added upon it with some fancier new weapons. While their last attempt was a bit of a letdown, Halo 5 is a significant step up. While dual wielding weapons such as SMGs are completely absent, 343 Industries has been able to implement some smart new mechanics that change the rules of the battlefield. For example, while there are those who dislike the idea of ADS (aim-down-sights) in their Halo game, it’s used rather intelligently. It’s used to, as one would expect, better hit enemies at a distance, but if you’re taking damage, you will be pulled out of this view. It makes more sense as getting shot should act as a kickback, even though Spartans have thick armor and shields equipped. Additionally, there’s a new slam feature that, while in the air, Spartans are able to charge up an attack that propels them towards the ground, damaging enemies around them. The amount of much damage is determined on how far the Spartan travels to land their attack, and how close of a proximity enemies are in. There’s nothing like taking out four Spartans with one strike to win an uneven match. 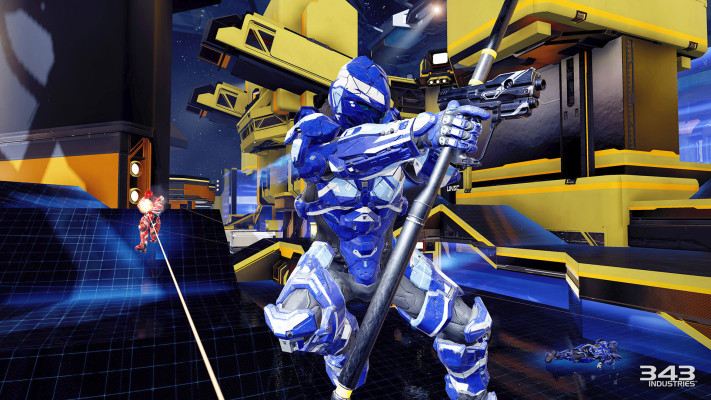 There’s just far more of an emphasis on speedier and intense combat that really bodes well for the franchise. While the series has always been about exciting set pieces and snappy shooting mechanics, Halo 5 ensures there’s no stopping, especially in multiplayer. This is aided by the last new major inclusion in the charge attack. Of the three, the charge is the most welcome addition as it ensures combat isn’t broken up. Spartans can be running full force, and when they see an enemy, instead of stopping to shoot, they slam right into them and then opens fire. Another more than welcome implementation is the recovery state, at least in single-player. Here, your AI buddies, or cooperative allies, will be able to revive your character within a given time period – otherwise they’ll be out of the battle until a checkpoint, or a restart is needed. This could have been used to create an Execution multiplayer mode, similar to that in Gears of War where enemies need to finish off their opponents, but alas, it’s something to strive for in the next release. This makes the higher difficulties a little more bearable, but unfortunately the artificial intelligence in teammates can be dreadfully bad. What I equate as the final boss was an absolute pain with the AI running around like chickens with their heads cut off.

While the single player campaign is a large portion of the experience, and ultimately doesn’t live up to expectations, it pales in comparison to what’s offered in multiplayer. This is a terrible notion to claim, but Halo 5’s structure is closer to Call of Duty more now than it ever has. Not in terms of how multiplayer is designed as it still has its unique traits, but it’s something I wouldn’t advise anyone to pick this up strictly for the campaign mode. The multiplayer component is what will keep gamers coming back while the story this time around is far too light and not as compelling as it should be. There are two modes that can be accessed: Arena and Warzone. Arena focuses more on the traditional game types, which includes Slayer, Strongholds and Capture the Flag, while Warzone is a new, 24-player brawl that’s comparable to Battlefield’s Conquest mode. Arena does have a couple more intriguing game types that break things up from the norm, though. For example, SWAT returns, giving players a specific powerful weapon, such as a magnum or battle rifle, and removes shields, while the newly established Breakout is a best-of-nine competition that merges Capture the Flag and Slayer together in a simulation-esque environment. 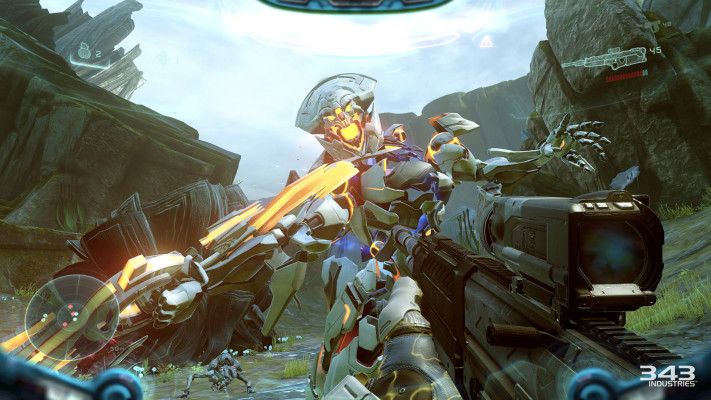 These are situated in a playlist for specific game types, allowing users to rank up. Not only is there a leveling system for your Spartan, which is only used as a representative for how much you’ve played, but playlists now have ranks to be upgraded, starting off on Gold 1 and moving into Platinum and beyond. Warzone has a similar playlist functionality, but it’s not as robust or varied as its Arena brother. While Arena has fifteen potential maps to be used, there are very few available in Warzone at the moment. At the very least they are aesthetically different from one another and structured to better situate various scenarios. The two modes are also distinct in scale, with Arena focusing on close quarters environments – although comes with greater verticality to its design, allowing for the utilization of the ground pound – and Warzone being far more open. Regardless of which mode is played, there’s a lot of enjoyment to be had. Even after frustrating matches where I went 2-5 or pick up a .2 KDA, there’s something about Halo 5 that just had me coming back.

There’s a reason to play Halo 5’s multiplayer other than just the sheer joy of shooting random strangers online. 343 Industries has implemented a new reward system called REQ (Requisition) which allows users to rack up points to buy decks of cards. Unfortunately, while this does encourage players to save up and buy bigger packs, ranging from 1,250 to 10,000 points, it also becomes dangerously close to how free-to-play games are becoming. In fact, this mimics Splash Damage’s latest F2P title, Dirty Bomb, in which users earn a currency by playing matches that can be used to buy packs to unlock random characters and weapons. This is slightly different in the sense some of the items here are for aesthetic purposes, like new armor styles and weapon skins, but most of what is pulled are vehicle and weapon cards that can be used in Warzone when the in-match level hits a certain value. While microtransactions weren’t made available in the review build, it’s something Microsoft will be offering for those who want to bypass a playing multiplayer.

Halo 5: Guardians is a fine-tuned machine. It has a robust and highly addictive competitive multiplayer component, a large variety of aesthetically pleasing customizations and some of the tightest controls to ever grace a Halo title. Unfortunately, the campaign leaves much to be desired. While it features four player cooperative play through the entirety of the experience, the plot is both poorly structured and awkwardly paced. A number of fascinating locations are visited and the cutscenes are spectacles in their own right, but the story is razor thin and the cast of characters, including our two protagonists, have virtually no development to be found. It doesn’t help the team AI can also be disastrous in certain situations, even though they are effective in firefights. The concept behind Master Chief going AWOL should have been far more dramatic than it was considering how much of Fireteam Osiris’ motivation to be a part of the story is about finding him. The REQ system does open up a number of concerns regarding the structure of the multiplayer, not to mention all shooters, moving forward, but it does serve as a means to continue a persistent grind. Looking past all the disappointing aspects, Halo 5’s multiplayer shines brightly thanks to some of the best advancements the series has seen. It mainly comes down to momentum, and while it’s more that Halo is doing some catching up after Titanfall, Call of Duty: Advanced Warfare and Destiny all featured far more versatile mechanics, it’s still great to see the series take a step in the right direction. If you go into Halo 5: Guardians with the intent of primarily playing multiplayer, then this won’t disappoint.