Battleborn, Gearbox’s latest passion project, is a tremendously refreshing twist on the tried and true mutiplayer shooter. It lets players choose from a roster of 25 heroes that each boast their own weapons, abilities and personalities, leveling them up over the course of each match or mission to mold the character’s performance to their own style of play. Your hero reverts to Level 1 at the end of each session, however, stripping players of the satisfaction of building up their character over time, but presenting the opportunity to experiment with new builds of the same character — or maybe a different one entirely — every time they play. Each level gained comes with a selection of two to three different abilities or enhancements, and players can choose which they want to employ during that battle to augment their hero to the challenge at hand. It’s an engaging, flexible and wonderfully empowering system, stealing the show when we recently tried our hand at Battleborn‘s new multiplayer modes. 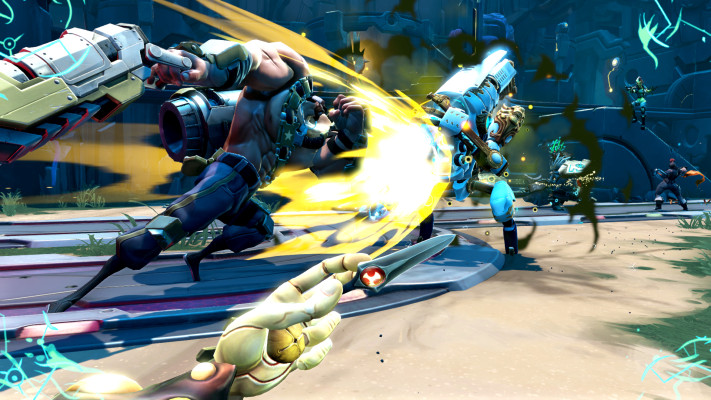 The first mode, Capture, is an intense death match that has two teams of players competing to gain and hold control of certain areas on the map. These objectives are spread throughout the field, forcing players to break ranks and work quickly, breeding intense, heated and unrelenting clashes between opposing players as they vie for the coveted territory. The other mode, Meltdown, tasks each team with guiding groups of minions on a march to their deaths. Teams score points for each minion they successfully escort to the incinerator, but in order to attain victory players will have to split their attention between upholding the safety of their own minions, and ruthlessly smiting their enemies’ before they can reach their goal. Meltdown still boasts Capture’s swift and fierce encounters, but it adds a new wrinkle by giving players another element to consider in the minions. Both multiplayer modes were incredibly fun, prompting constantly developing strategies from my team as we reacted to our opponents’ schemes and tailored our band of heroes to combat their evolving abilities.

Battleborn‘s customization has always been its greatest boon, but it shines brightest in its competitive modes. While playing through the campaign, players augment their character based on the enemies they encounter, the makeup of their team and their teammates’ own augmentations, producing a constantly evolving experience that is different each time you play. The same can be said for its multiplayer modes, but by switching the opponents from programmed, predictable enemies to player-controlled heroes that share your potential for tactical improvisation, the strategy of the experience becomes significantly more complex. You still want to choose your augmentations based on the attributes of your team and the flaws you notice in the enemy and your own hero’s performance, but it’s also crucial to consider the abilities you observe your opponents acquiring over the course of a match, thus selecting new abilities and enhancements that are best suited to the current environment. Because everyone is constantly unlocking new abilities and putting their own proactive or reactive spins on the match, Battleborn‘s multiplayer modes are sensationally mercurial. 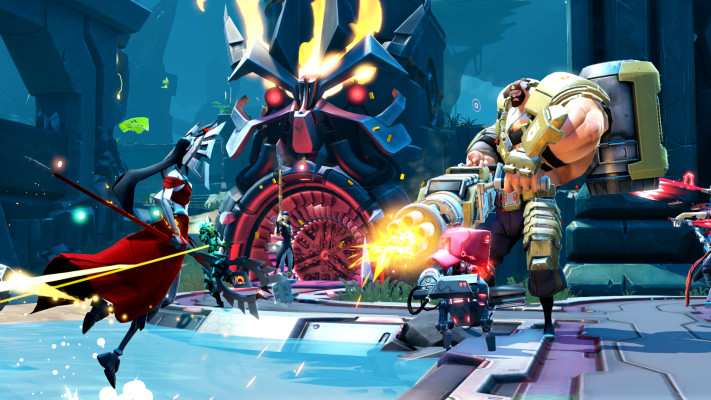 Battleborn‘s multiplayer is incredibly impressive, but don’t think that means Gearbox is neglecting the campaign. The studio has promised a multi-chapter narrative adventure that can be experienced alone or cooperatively with friends, both splitscreen and online. New heroes are unlocked as the story’s self-contained episodes are completed and loot packs are collected that contain procedurally-generated gear that can be equipped to customize loadouts, further enhancing the potential for personal, granular modifications. Battleborn is all about imprinting your personality and preferences on your heroes, and it’s immensely satisfying in practice.

After playing so many hours of Battleborn, I can’t emphasize enough just how unique each hero feels. Obviously each class of character has its own strengths and weaknesses, but even heroes of the same class can feel completely different from each other. This comes down to the weapons they wield, the abilities they tote, and even the way they move, and while I picked out a few favorites while I explored the game’s roster, I enjoyed my time with each and every one. Battleborn’s character-building design might be jarring to players used to grinding for experience and enjoying the permanence of leveling-up, but after my extended experience with the game, I can say it’s imperative to surrender yourself to experimentation to get the most out of Gearbox’s colorful cooperative shooter. Being open to new combinations of abilities and different styles of play allows one to take full advantage of Battleborn‘s incredibly expressive augmentation system and ultimately participate fully in some of the most enjoyable PvP battles I’ve ever had the pleasure to be a part of. Gearbox has only revealed 15 of its 25 hero roster, but their identities, as well as other juicy new details, are sure to be announced as we draw close to the game’s February 9, 2016 release.