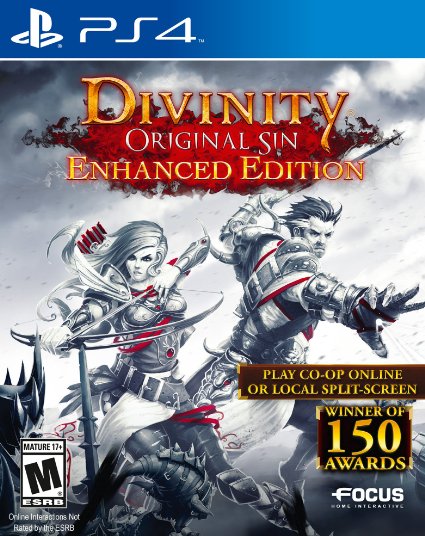 When we originally reviewed Divinity: Original Sin nearly a year and a half ago, one thing was absolutely clear: this is the definitive modern title for those seeking a hardcore, old-school RPG. From the fact that players are never given any instruction on what they should be doing, which is admittedly going to be confusing for a console audience that isn’t necessarily used to mouse-and-keyboard RPGs, to its unforgiving conditions, this is the type of game that requires patience and commitment. The thing is, once you give Divinity: Original Sin the time it deserves, it’s clear that this experience has all the makings of something special (after all, there’s a reason why the industry widely considered it to be one of the best PC offerings of 2014). If you’re the type of console player who doesn’t mind putting up with menus on top of menus and who doesn’t need their hand held, then Divinity: Original Sin Enhanced Edition, which is Larian’s first console game since Divinity II, is the game for you.

I could go on and on about all of the wonderful mechanics at play in Enhanced Edition, but that would brush aside the biggest question with this rock-solid port: does it function well on a console? If you’re the type of player that is going to pick up Divinity: Original Sin: Enhanced Edition, then chances are you’re someone who has very good reasons for wanting to hop into quite possibly the best RPG of 2014 (outside of Dragon Age: Inquisition, of course). This is absolutely not the type of game that you just stumble across and wind up downloading on a whim, barring any sort of future digital sales, so those who want an old-school RPG experience are truly the core audience here. The thing is, those who have not played Divinity: Original Sin on PC due to rig inefficiencies will find the Enhanced Edition to be a wonderful substitution, though it can be clear at times where a mouse and keyboard would function better. Still, with all of the additions here, those looking for that hardcore RPG experience from yesteryear can’t really do much better on the PlayStation 4 or Xbox One. 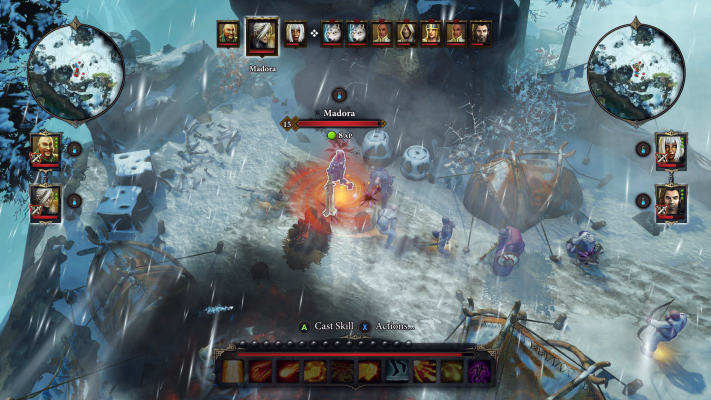 The biggest question surrounding Enhanced Edition is how controls that were clearly designed to function on keyboard and mouse work on a controller. While it’s clear that this is a PC game through and through, and the best place to play Original Sin is still clearly the personal computer, Larian Studios has come up with a workable solution to what seemed to be an impossible problem. Players control character movement Diablo III: Ultimate Evil Edition style with their left stick and are able to rotate the camera and zoom in by using the right stick’s horizontal and vertical vertices, respectively. This camera movement takes a bit of getting used to, as players are used to 360-degree camera movement being mapped to joysticks, but once you realize that this title pretty much controls differently than anything you’ve ever played on console, it’s not tough to wrap your head around. Even though the fact that Divinity: Original Sin: Enhanced Edition only runs at thirty frames-per-second can cause some slight chugging during rapid camera rotations, it’s hard not to get the feeling that Larian Studios did the absolute best it could do here. In fact, the only area in which this port feels a bit clunky is when you’re trying to highlight objects within battles or the environment. It’s pretty easy to lack precision when you’re simply moving your stick in the general area of an enemy or item, though being able to whip out a cursor by touching the right directional button certainly helps. Still, this is a solution that makes one point clear: if you have the means, you should still probably play this one on PC.

Divinity: Original Sin is an admittedly menu-heavy game, and Larian has devised the most player-friendly way to translate mouse functionality to the controller itself. Your left trigger will allow you to switch between characters in your party at will through the use of a radial menu, whereas the radial on the right trigger will enable you to bring up your quest log, inventory equipment and other logistical goodies. There is a real learning curve here within the first few hours, as players will often find themselves bringing up the opposite radial menu that they want. Still, one only has to spend a bit of time with Enhanced Edition to see that this is one of the most well-thought-out PC to console ports in quite some time. Add this to the fact that your casting menu is always mapped to the Triangle button and the Square button always brings up contextual menus based on the object that you’ve highlighted, and it’s clear that this is the absolute best way to go about mapping this functionality to a controller. Combat certainly functions quite well on a controller, as turn-based combat has never been as much of an issue on a gamepad as, say, real-time strategy. While the above complaints about the imprecision of enemy highlighting ring true in combat, nothing at all has been dumbed down, so this is the full-fledged experience in every sense of the word. 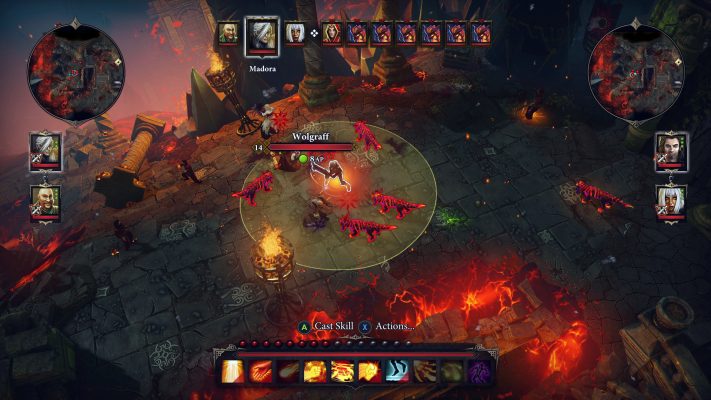 Easily the best addition to the Enhanced Edition is the increased amount of NPC voice acting. Now that every non-player character actually has a voice, it’s a lot easier to pay attention to Divinity: Original Sin‘s often overwhelming dialogue. Make no mistake, if you jump into Divinity: Original Sin completely blind, you’ll find yourself completely lost at some point. This sense of being lost is a direct result of Larian creating a game that doesn’t hold your hand, which is going to be a rude awakening for PlayStation 4 and Xbox One owners who only play modern role-playing games. It’s imperative that players pay attention to every character, and when the screen is covered with a simple block of text, it’s often hard to fully comprehend context in the middle of a full-on Divinity marathon. The fact that every  character is voice-acted will play well with a console audience, as heavy on-screen text alone never feels completely at home on a television.   Add all of this to the fact that every detail of the original PC version is maintained, and Enhanced Edition manages to feel like a port that oozes developer care. Perhaps most notably, players have the ability to enjoy Enhanced Edition through split-screen multiplayer, though it’s admittedly hard to see this feature being as popular as it could be. After all, how many people are actually going to play through a 65-hour-plus dense RPG with someone on the same couch?.

Even though Sony has all but officially buried the PlayStation Vita, there is a moderate contingent of gamers out there who enjoy playing their PlayStation 4 games using Remote Play before they pass out. When it comes to Enhanced Edition, Remote Play is definitely a mixed bag. Even though characters look minuscule on a massive screen during native PlayStation 4 play, you’ll find yourself feeling like you’re controlling an ant farm when you initiate Remote Play. Combine this with some framerate issues whenever players rotate the camera, even on a direct connection, and it’s clear that this Remote Play isn’t as wonderful of an experience as it could be. The good news? There are literally zero back-touch commands here, so players will actually be able to hold their Vitas like real human-beings. 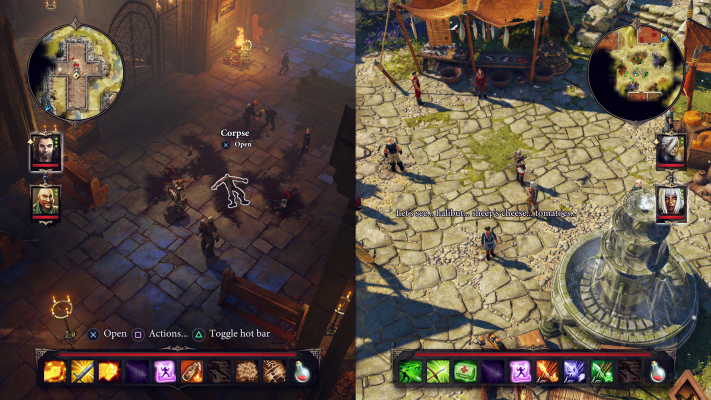 Perhaps the best compliment that one could pay Divinity: Original Sin Enhanced Edition is that it is absolutely Divinity: Original Sin in every sense of the name. Sure, it is probably a better idea, given the option, to play this insanely deep RPG with a mouse and keyboard instead of a controller, but those without a gaming rig will be able to get the full experience without losing anything. Thanks to the combination of smart button-mapping, fully-voiced non-player characters and a core game that is deserving of its universal praise, this is one title that the most hardcore of console gamers absolutely have to have. The real question is, will this be the title that starts a full-fledged wave of hardcore PC titles crashing their way onto consoles? Could we see games like Pillars of Eternity make their way to the PlayStation 4 and Xbox One? Time will only tell, but one thing is for certain: Divinity: Original Sin Enhanced Edition has positioned itself as a great example of a PC-to-console port done right.