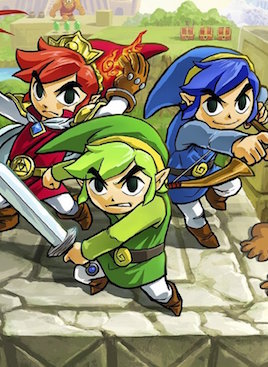 There is no intro; no slowly-winding monologue or flicker of a still-nostalgic introduction to a classic title. The moment Tri Force Heroes is booted up, a simple background flashes up, title card and all, and one simple tap starts Link’s latest quest. Or be it, a quest in name only. That should tell you enough of where the latest entry into The Legend of Zelda sits among the pantheon of Nintendo’s celebrated series. Because for as much as Link’s second [original] entry on the 3DS may remind you of Four Swords, all the way back on the Game Boy Advance — and later the Gamecube — the truth is, Zelda‘s designation in the year of our Goddesses 2015 feels more like a respite for what lies beyond the horizon. That inescapably wide and distant horizon it has to be said.

Does that automatically relegate Tri Force Heroes as a spin-off? Well, yes and no. While it’s clear there’s little of the grand scale here these games are renowned for, that doesn’t mean Nintendo haven’t found a way, as they so often do, to make even the most minute of vertical gameplay slices feel like the most jubilant moments you’ll ever come across. In hindsight they’re not, but those brief moments of bliss aren’t so easily ignored when you consider the near-irrelevant plot and half-attempt at replicating that same feeling of adventure, fortunately, don’t overstay their welcome. Tri Force Heroes sets itself in the fashion-favorited land of Hytopia. A dreaded curse on the kingdom’s princess sends the land into an almighty depression and it’s up to Link, once again, to save the day as is so often the case for our tunic-wearing, sword-swiping young maestro.

The difference here, as the name may or may not hint towards, is Link — rather than a lone adventurer — is joined by two accompanying duplicates. Regardless of whether you play through the mission-based series of stages in single player or with multiple players, you will make up a third of the action at any given time. In single-player, however, you are joined by two ‘doppels’ that can’t think/move on their own and require you to switch between the three. This is done by a simple tap of the touchscreen which transfers you between bodies; while idle, the two doppels can’t take damage, but that doesn’t take away from the increased difficulty missions gain when tackling them on their own. On some occasions, puzzles are so difficult to achieve going solo, multiplayer is the only viable option. 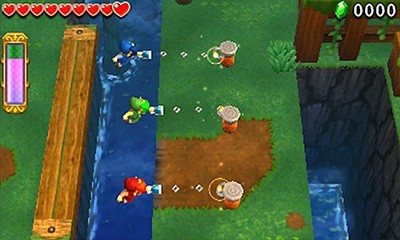 With that said, single-player in general doesn’t carry the same weight or indeed level of impact multiplayer exerts. Tri Force Heroes doesn’t try to market itself as a single-player experience, though, greatly benefiting as a result. One could argue the lack of preset stances or positions, akin to what was available in Four Swords, might have helped alleviate some of the single-player’s limitations, but there are enough interesting mechanics within the gameplay itself, those bold enough — and quick enough with their fingers on the touchscreen — to tackle the four-part missions on their own, will find challenge in accomplishing their task. So it’s multiplayer where Tri Force Heroes’ mix of puzzle design and player co-operation really shines; the latter stirring up some unexpected relief alongside momentary joys you simply can’t obtain going through on your own. Each mission will only last you about a few minutes and the linear structure may put dedicated fans off at the start, but eventually you’ll find the charm in Nintendo’s level and puzzle design eventually shine through.

Be it the [in]ability to work together and/or communicate to each other using the accompanying phrases/words supplied, even the simplest of puzzles or boss fights, at first rocky and tense, can end up dishing out some rather silly and humorous goofs on both ends. Especially when puzzles — or even certain enemies – are placed at differing heights, the key is figuring out which height and position will see you pass using the ‘totem’ ability which stacks Link’s on top of one another. What’s more (Pegasus boots aside) the fact you only have one item per mission, in most cases a mix of three, puzzle-solving expands into what and where to use your selected item in conjunction with what players currently have equipped. While the trial-and-error approach may result in numerous failed attempts — and with players sharing a heart meter, if more than one Link falls or suffers damage that correlates to the amount of hearts lost — Tri Force Heroes, at its best, turns and twists into a game of risk and reward. 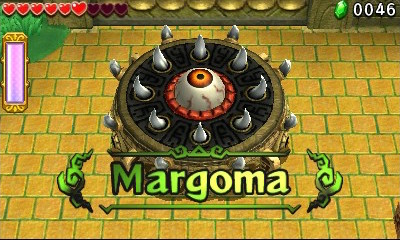 You can of course skip segments you’re finding a little too difficult — up to three times on each mission — but doing so will limit, or even prevent, the acquisition of certain materials of which can be used to craft new clothing and costumes. All of which carry their own perks and/or gimmicks such as increased defense, not skidding on ice, even swimming in lava. But outside the mission structure, there’s little else to distract players from the main campaign at hand. There’s an additional battle mode that pits you against other players, however connectivity lag can often cheat you out of a well-timed sword swipe or such. What’s more the fact battles amount to little more than who can snatch the best item first — said items held for the entire duration of the match — the competitive options handed don’t last or entertain as long. There are at times some slight jumps in the main campaign, but for the most the core game retains a steady and smooth connection. 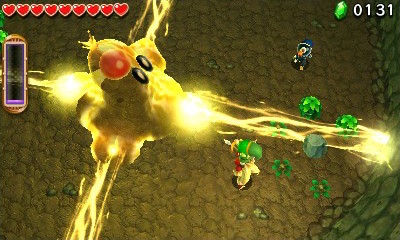 Tri Force Heroes is not the Zelda we’ve come to expect and certainly not the experience we’re all so agonizingly, painstakingly looking forward to seeing more of (whatever platform it’ll be built for). For that reason, it doesn’t stand up to the monolithic scale of its older brethren, more specifically 2013’s 3DS outing A Link Between Worlds in both structure and presentation. While this latest handheld offering may turn away from the series formula — at times making you long for an experience as opposed to a drab-looking to-do list —  that doesn’t leave it entirely lacking in ideas, though. In the end, Nintendo’s multiplayer-centric, multiplayer-favoring mechanics offer just enough neat ideas and well-implemented level design to keep you invested. I mean…come on, you can have Link wear a dress for Christ’s sake. It’s a silly game with an equally-silly concept, but Nintendo somehow does just enough to make it work, if not excel.