The gameplay footage follows the path of a young, solitary woman pushing her way through a snow covered landscape. From moving quietly through a grove of snow laden trees littered with bodies, to finding shelter in a cave of which the walls bear the markings of some primitive culture; the video portrays a lonely character who is struggling to survive in a harsh world.  All of this preceded the scenes that really caught our attention.  The character, after moving into what seem to be a collection of ruins, comes across a gigantic monster.  A battle ensues, culminating in the woman climbing the giant’s back before it catches hold of her and begins lowering her into its gaping maw.  The trailer cuts the scene there, transitioning to the logo of the game.  Leaving us all wondering.

We decided that we had to know more, so reached out to Brian Parnell of No Matter Studios with the aim of getting to know a little about the team behind Prey to the Gods and the game itself.

[Hardcore Gamer] No Matter was established as a studio only last year. What brought the three of you together?

[Brian Parnell] Chien, Tim and I go way back to Boston, MA. We all worked at Tencent Boston together. At the time it was a company making an MMO then we shifted gears to 3D Facebook game Robot Rising and “mid-core” (ugh).  I’ll be honest we struggled trying to understand ‘social’ gaming when we had been making ‘traditional’ games for so long.  However, that’s where all three of us started getting our feet wet with Unity.

When Tencent Boston folded I saw the writing on the wall for Boston. 38 Studios had imploded a little while earlier and with Irrational at 200+ people and 6 months late on dev I knew layoffs were imminent. Harmonix was slowing a bit, and Turbine just wasn’t something that interesting to me. I had lived in Boston for close to 10 years and realized it was time for a change of scenery. Seattle was where I really wanted to go because of family but San Francisco is awesome too. Lots of opportunity so I was first to make the voyage. It didn’t take long for Chien and Tim to follow. Actually, just about all of that studio went west.

So this was about 3 years ago and mobile hadn’t gotten totally ridiculous. There was still some opportunity to make something cool. Sadly, despite our best efforts we quickly realized that our combined experiences with “social” and mobile games was just one soulless ‘fast follow’ after another. It just wasn’t why we had gotten into games. This was around this time Metal was announced for Apple. I went to Chien and Tim and we agreed we need to make something awesome, something that was really the anti-“social” game. Ha! 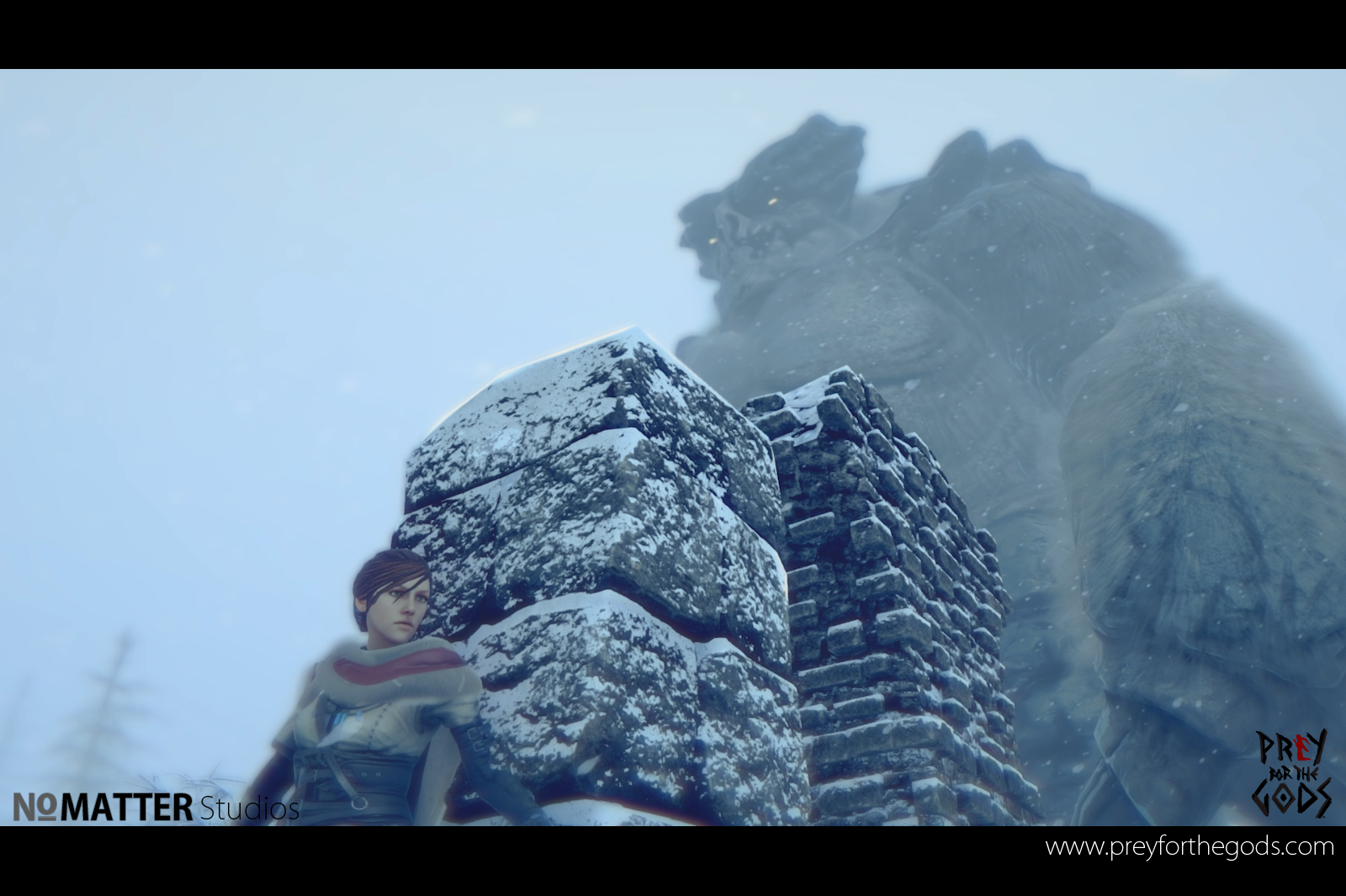 How did the concept of Prey for the Gods come about and why did you decide that it was the game to be the maiden project of No Matter?

Originally, it was to build something that was incredible to watch, play, and had a soul. We knew that with only a few characters on screen we could really control scope in our favor.

The reveal trailer incited a huge amount of interest in a short time. Were you expecting such a positive response?

We were totally blown away. Honestly, we thought we’d get 1,000 views MAYBE 10,000 if we got lucky. Then reach out to press, I even wrote a fancy press release, luckily I never had to send it out.

In the days after the trailer released; Prey for the Gods was immediately compared to Shadow of the Colossus from a multitude of sources. Can you share any thoughts you might have on that comparison?

We think that’s pretty awesome. Especially, given how early we are in development. When Takeshi Asano from SotC reached out with his kind words that really made this feel right for us.

I grew up with Mario and Sonic so if that’s how people want to compare us that’d be awesome. By that I mean we might have some things that look similar and are certainly inspired but I can tell you even from simply running around it’s a very different game. I love both Mario and Sonic btw.;)

If you could assign a genre for Prey for the Gods, what would it be?

That’s a tough one. It’d probably be some giant acronym. How about Third Person Colossal Adventure Survival game. Or TPCAS? I like using the term colossal as it gives respect and is pretty obvious for those that know. One of our fans dubbed Scaling Combat Genre, maybe that’s better? 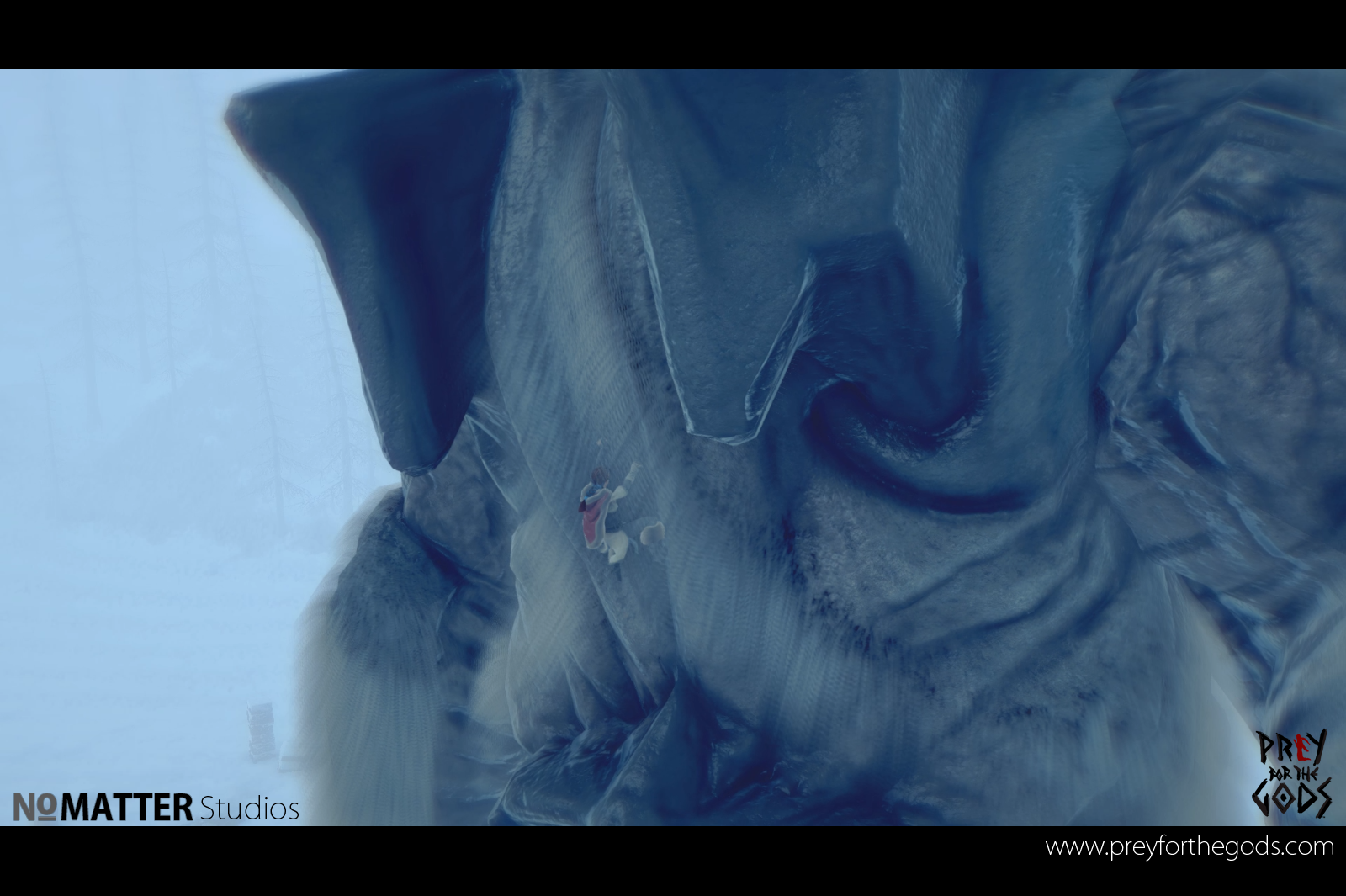 No Matter Studios is a relatively small organization. Do you feel that this has/will affect the scope of the game? If so; how?

It certainly affects the scope.  Prey for the Gods is pretty much built all around what we’re able to do so the focus is incredibly tight.  Instead of adding and adding like most AAA games we’re tending to take things away whenever possible to help with focus. Take for example UI. We’re doing everything we can to limit UI (I personally want it gone completely I really can’t stand UI in games). Work wise, this would help us a ton for localization, and also offset risk for hefty tutorials and other typically UI heavy tasks. However, the main reason we’re pushing for this is that the game will be more immersive. The minute we turned off the health/stamina HUD we knew we had to try our best to keep it that way.

Will you be looking to expand the team in the future?

Possibly. It’s too early at the moment; however our first position would be an animator.

The trailer portrays a seemingly lonely journey for the protagonist. Apart from the giant; we saw some wolves and a few dead bodies. Will there be interaction with characters other than enemies?

Yes! As the story says you are the lone hero. Many others have made this journey and look to have failed. There won’t be any other living humans to interact with. However, you’ll be able to search their bodies and retrieve clues, and other items that’ll help you.

The combat we have seen heavily features the bow. Will there be other weapons or combat techniques for the player?

It’s too early to say. With what I’m thinking with the idea of looting and retrieving items, I’d love for the player to get items similar to the original Zelda. For example; the blue ring. You can beat the game with it or get the red ring. Or, you can go hardcore and stay classic green. So, in this context you could find warmer clothing or a bow. However, we won’t put +5 to dmg on it. I’d prefer to make it visually obvious to the player what you’d expect from that item. As a player you will need to decide if it’s good or not by feel. Obviously, we’ll need to playtest this. 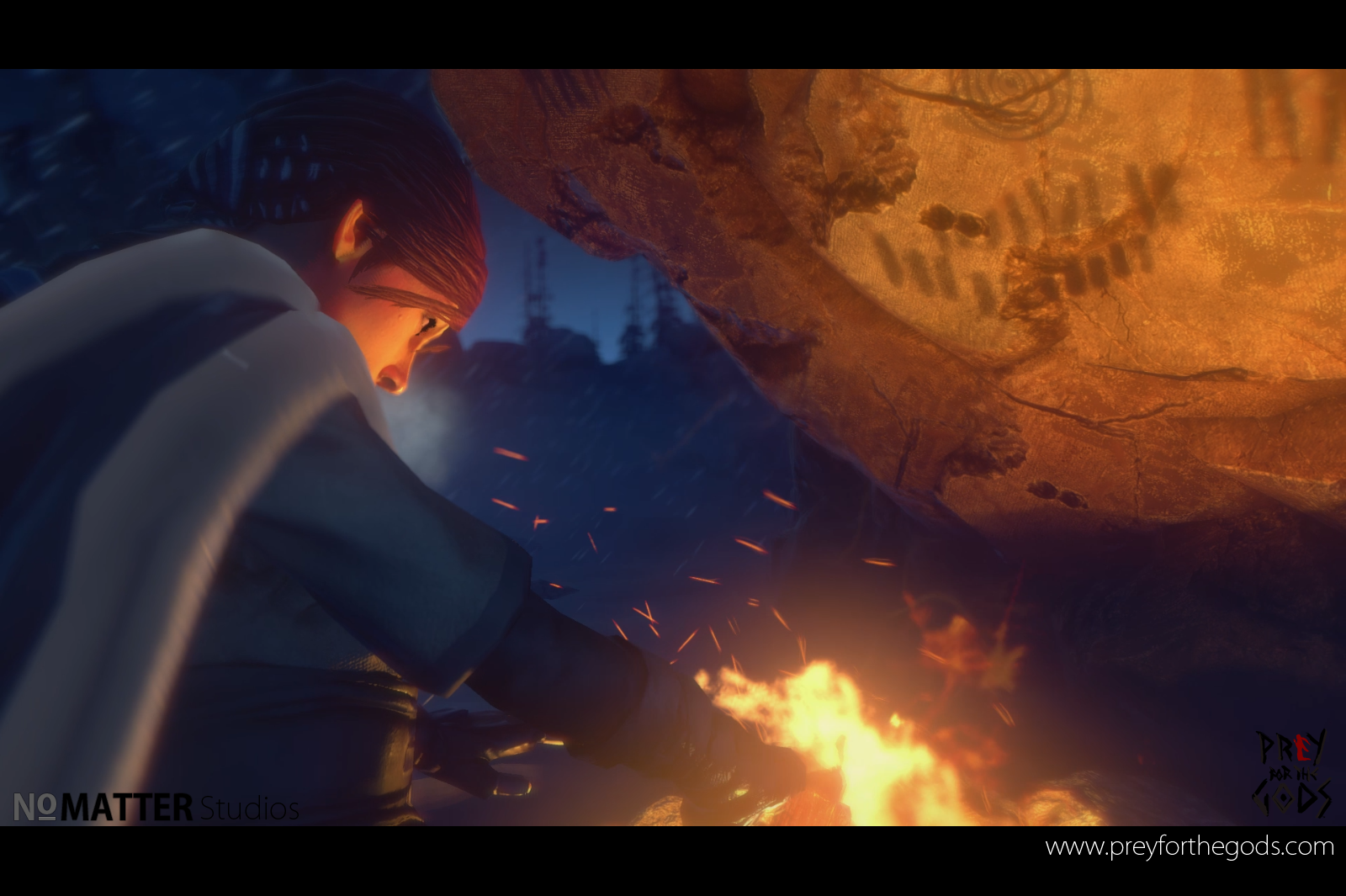 In a previous interview, you mentioned that weather will have a large effect on gameplay. You stated “keeping warm and keeping up your energy are two major parts to your survival.” Will there be other ‘survival’ aspects to the game; such as food, sleep, etc?

Yes. They are. We call it our exhaustion system. Everything you do will affect your level of exhaustion. Take for example our snow. The deeper the snow the slower you move. It’s downright terrifying when you get slowed in deeper snow and the giant is catching up to you. So we have a kind of burst stamina you can use to sprint or dodge which can help avoid moments like that. However, if you burn through the stamina your exhaustion will take a hit. You can offset this with a number of things including rest.

With our survival I didn’t want it to become a game where you were looking for five out of ten pieces of grass that you’ll need to sew together to get a belt. While I can appreciate that level of granularity for us; it’s missing out on the fact that there are giants to battle, which we feel is core. It’s just a more streamlined approach. I want to keep items directly impacting your play. With limited inventory, you’ll need to make choices that’ll affect how you play. Tim is currently focused on the survival systems and I just updated the survival doc. So hopefully it’ll pan out!

I’d love both Co-op and PVP! However, it’s dependent on scope and if it’s something that is right for the game. Simply adding another player can have adverse effects to a well-balanced single player game. We have some ideas, however, that can get around that. It’s simply something we haven’t started development on so we unfortunately will need to stay quiet until we have something more final.

Well what we’ve seen looks great.  Thanks for the chat, we hope to see more soon!

No Matter have previously stated that the game will be released when ready, so we might have a while to wait before we can try our hand at giant slaying.  In the meantime you can find more information and media at the Prey for the Gods website.  Alternatively, follow the game on twitter @PreyForTheGods and on Facebook.