Halo 5: Guardians, the latest title in perhaps the most mechanically sound first-person shooter franchise on the market, is an exciting experience for everybody involved, but it is not without its flaws. While 343 Industries has managed to avoid a disastrous launch, unlike what happened nearly one year ago, there are a number of controversies surrounding Halo 5 that have left members of the gaming world scratching their collective heads. Yes, its narrative is flawed and all of the advertising that painted Guardians as a battle between two epic Spartan characters was misleading, but the most egregious decision takes place in its fast-paced multiplayer modes. Microtransactions in sixty dollar games are growing far too common, and the fact that they have invaded what used to be one of the purest franchises around is a shame. After all, Halo 5: Guardians is an absolute blast to play and it’s depressing to see avenues for increased revenue seep into a pretty darn cool video game.

Players have the ability to purchase Requisition Packs, which grant usable items and other unlocks in the form of cards of increasing rarity. Sure, there’s absolutely no need to spend a single dime in Halo 5, but this doesn’t change the fact that there is some amount of grinding necessary to be the most effective player in 343’s frenetic PvPvE mode Warzone. Let’s face it: if you’re someone who is constantly spending cash on Requisition Packs, you’re going to get a lot more useful stuff than those who are simply pouring their time into earning virtual currency. The destination for these two parties is certainly the same, but the respective journeys differ so dramatically that Halo 5 can occasionally feel like a sixty dollar free-to-play title. 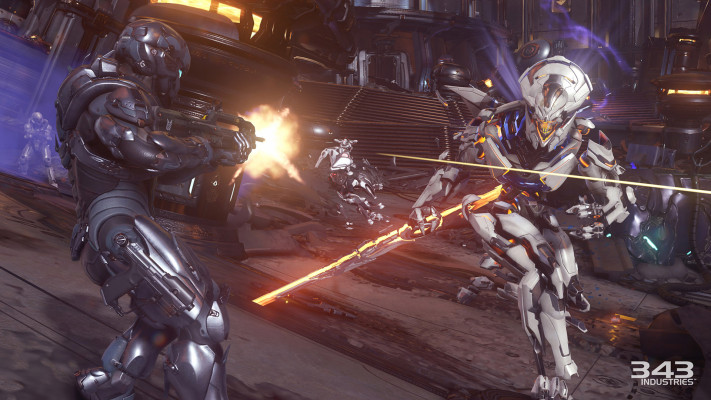 343 Industries has every right to charge players whatever they choose for any aspect of Halo 5, but that doesn’t mean that players won’t feel exploited in some fashion. After all, if there are players with insane fully-automatic Battle Rifles running around before hopping into Mantises, they are going to do far more damage than someone who has to save every Ghost card they get.

There have  been quite a few examples of AAA games that have been far more evil with their microtransactions (just look at the fact that you can buy FOB insurance in Metal Gear Solid V: The Phantom Pain), but when Halo 5 feels more pay-to-win than Dota 2, an actual free-to-play game, there’s something definitely wrong here. Media members and other industry professionals are always telling gamers to vote with their wallets and this feels like one instance where that is absolutely going to be necessary. Halo has always been a franchise that players can pick up and play whenever they are seeking a pure first-person shooting experience with masterful mechanics, and seeing microtransactions muddy the waters, even slightly, is something that simply feels wrong. Let’s level the playing field here and grind for our Requisition Packs like the knowledgeable consumers we are, since we all paid full price for the ability to play at launch, anyways.