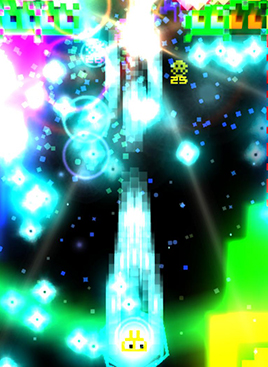 How much color is too much color?  Hyperspace Invaders II: Pixel Edition is a vertical shooter that attempts to answer that question by putting every single color possible on screen at once in a pixelated frenzy of bullet-spewing madness.  Enemies fly out in their dozens in a large number of formations and attack patterns, no single one particularly deadly, but crowding the screen with so much activity that a plotting a course through it all is an exercise in unthinking experience rather than planning.  The enemies swarm, you react, and everything is keyed to the stunning electronic music soundtrack.  Hyperspace Invaders II is as much an album as it is a game, with each level defined by its music.

The mechanics are simple enough, which is for the best when the action gets completely out of hand.  A single small ship flies up the screen shooting a constant stream of firepower as it goes.  Most destroyed enemies drop a blue soul orb, which automatically homes in on the ship and not only works towards increasing laser power but also acts as a score multiplier.  A soul orb here and there isn’t particularly effective, but when they show up in their hundreds it does fantastic things for both score and laser.  Other than steering with the gamepad there’s only one button to pay attention to, and it turns the cheerful blue laser into an electro-stream of piercing red power, clearing off any bullets it touches and cutting through hordes of enemies.  It feeds off the score multiplier, though, so short taps to clear out unavoidable bullets is far more effective than blasting a massive jolt of power up the screen, especially seeing as, while powerful, it’s not a get-out-of-death-free card.  The power-shot may clear out bullets but there’s generally more than enough on screen to make life troublesome than what’s attacking head-on.

The one power-up in the game is a yellow star, bigger than the soul orbs but needing to be collected manually and precisely.  Graze it on its way by and it keeps going, although usually you’ll only have to wait another few seconds for another one to show up.  The stars turn the laser into a spread shot, with the power of the spread dependent on the soul orb multiplier.  A fully-charged side-shot not only gives you extra screen coverage but also bounces off the walls, doing a great job at clearing out the popcorn enemies.  There’s a balance to using the spread and power-shot, especially seeing as the power shot may give a wider stream of direct firepower but loses the angled bullets.  Not only that but, throughout a level, the power level fluctuates quite a bit thanks to power-shot usage and every hit taken halving the multiplier, plus the higher the multiplier the faster the power shot depletes it.  You’re never defenseless, but it’s always nice to be able to call up a crackling death-beam five times wider than the ship’s body with the press of a button. 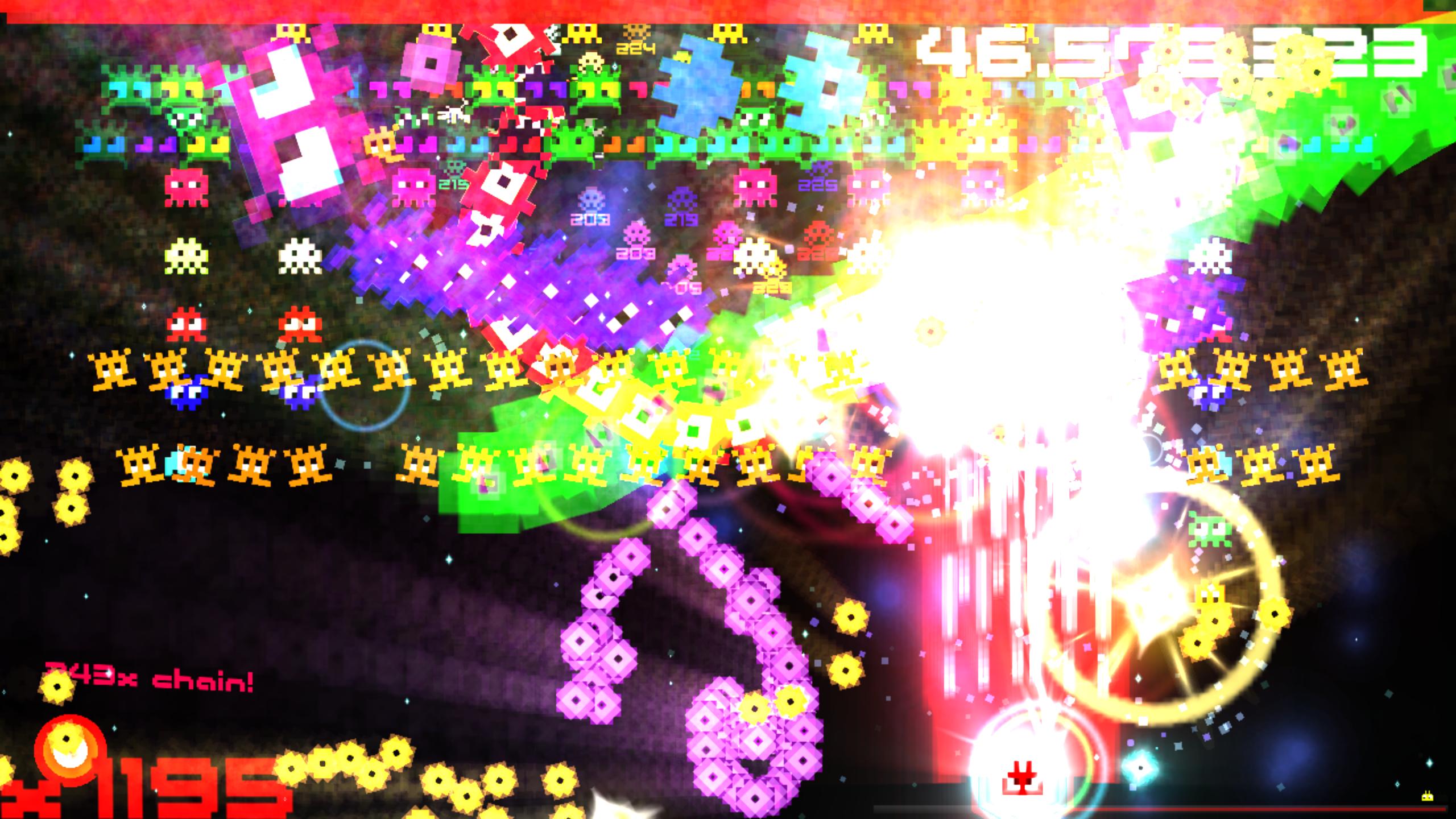 The attacking swarms can look completely insane in their density, but one of the surprising things about Hyperspace Invaders II is how heavily the odds are weighted in the player’s favor.  Yes, it’s hard, and earning the checkmark beside the last few levels indicating they’ve been completed is an accomplishment to be proud of, but once you get how the systems fit together the fight is clearly the player’s to lose.  Little enemies only take a hit to destroy, and even the standard shot can blow through a swarm with relative ease.  The screen can get crowded with bullets but a quick tap on the power-shot clears a path through, although only straight ahead.  Defeating bigger enemies can not only clear all bullets on the stage at once but also change them to soul orbs, easily earning an increase in overall shot power on the spot.  Even trickier enemies like the advancing green walls have their weaknesses, in that if you kill one it clears all of them off the screen at once.  Death can come quick but extra lives are cheap, so while a game-over score tally is the usual outcome there’s always a chance to hold on just long enough to keep going after the next death.  Hyperspace Invaders II is by no means easy, but its systems fit together in a way that gives you plenty of tools to weather the enemy-storm once you know how to exploit them.  None of it is very complicated, though, and the game boils down to “shoot everything, don’t get hit”.

If there’s a potential drawback to the design, in fact, it’s the simplicity of the level structure.  One level looks very much the same as the other in terms of enemy formations, with the primary difference being a greater variety of baddies and the intensity with which they’re thrown at you in later levels .  The simple, uncrowded tutorial of level 1 quickly turns into a log-jam of pixelated kamikaze death-wall assault later on, the horde targeting your poor little ship with a relentless focus.  A screenshot from level 2 is only different from a screenshot of level 8 due to the pure assault frenzy, but thankfully this is only half the point of the game.  The shooting may be technically a little too similar level to level, but the soundtrack is a whole different story.

While the energetic gameplay is great fun,  Hyperspace Invaders II‘s music plays as central a role as the frenzied shooting.  Each level is a single song, its length marked off by a small progress bar at the bottom of the screen, and you blast your way through the rhythms of a killer electronic music album.  Each of the ten tracks is distinct in its own right, with the specifics of the composition the enemy waves randomized but hand-coded to the beat in terms of arrival and intensity.  What could have been repetitive gameplay is amplified and made distinct by its music, and they complement each other perfectly.  The action is so thick that the active part of your brain has to let reflex take over, allowing you to listen to the tracks in a way that playing them in the background while doing just about anything else wouldn’t allow.  There’s not a single bad track in the collection, several are excellent, and Speed Force justifies the entire game in its own right.  As an added bonus, the music is sitting in the game folder in unencrypted .ogg format, waiting to be copied over to your music directory without the slightest bit of fuss.

Hyperspace Invaders II is a simple game, the kind you can sit down to for five to ten minutes and treat as a corneally-applied injection of hypercaffeinated energy.  Its music and gameplay are completely invigorating, as you navigate descending formations of smaller enemies, track down snakes cutting the screen into quadrants, and try to time the destruction of the big baddies to maximize the bullet-conversion payoff.  Each of the levels may play and look roughly the same but the music gives them their own distinct personality and it’s hard to complain about repetition when a massive bullet wave is homing in ahead of a cluster of blue jellyfish while a green barrier is slowly winding its way down the playfield, blocking your shots, and a wave of smaller enemies are doing a Space Invaders march across and down the screen.  The multiplier is up high enough that using it wears down its score bonus fast, there’s a few yellow spread-shot stars to catch, and Mergel’s Delete Live track is pacing the level with sections of full-tilt assault bracketed by moments of brief, quiet rest.  Hypserspace Invaders II: Pixel Edition fuses an intense arcade shooter with eye-searing effects laid over chunky-pixel art, perfectly fused with its fantastic electronic soundtrack, as much a music album as a shooter and with both parts making each other all the better by contrast.