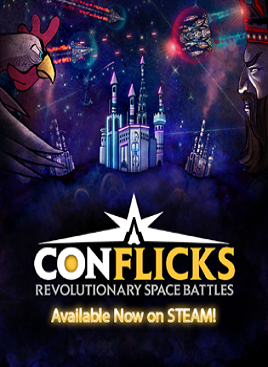 While tinkering in his workshop, Leonardo Di Vinci stumbled across a curious substance: metamatter. Manufactured from the yolks of chicken eggs, this discovery lead to a massive surge in invention. New technology swarmed the planet. It wasn’t long before metamatter was harnessed to fuel space travel. This technological age led not only to the advancement of ingenuity, it also gave rise to more violent conflicts between old rivals. The British, French and the Middle East are all at each other’s throats. The increasingly sentient race of chickens, realizing the extent of their own enslavement, begin plotting revolution. Needless to say, things have been simpler. Thanks, Da Vinci.

To describe Artifice Studio’s Conflicks: Revolutionary Space Battles as unusual would be the same degree of understatement as mentioning that Scientology seems a tad far-fetched. While there may be some elements that have been seen elsewhere, the way this adventure is put together gives lie to the belief that there is nothing new under the sun. Because of this, it can take a while to acclimate to the mechanics of this title. This sentiment extends as far as issuing orders. Just about every command and power requires an elastic-like “flick” to use. For example, if a ship needs to move to a certain point, this is accomplished by selecting the ship and move command, and pulling back to for aim and distance like an overhead Angry Birds slingshot. Letting go sends the ship careening off into the depths of space. If the aim was off, too bad. There is no AI pathfinding with this system. Special weapons and abilities are fired off in the same way.

Flicking ships into other ships will bump the target off course.This results in a whole new way to strategize. It is possible to win battles by attaching a load of ships to a frigate, flinging it towards the enemy, and allow the weak laser fire that they automatically put out to destroy the foe. With that, there are more satisfying and less stressful systems to use to win the day. For example, it is possible to bump an enemy into the gravitational pull of a nearby planet, causing them to crash. Weapons can be fired at asteriods, allowing the player to pull off trick shots. Doing this allows a cheap, meager torpedo craft to annihilate even the heaviest battle ship. Part marbles, part pool, this battle system forces players to think in new ways. If this title catches on, we are going to see some unbelievable gameplay videos out of this. 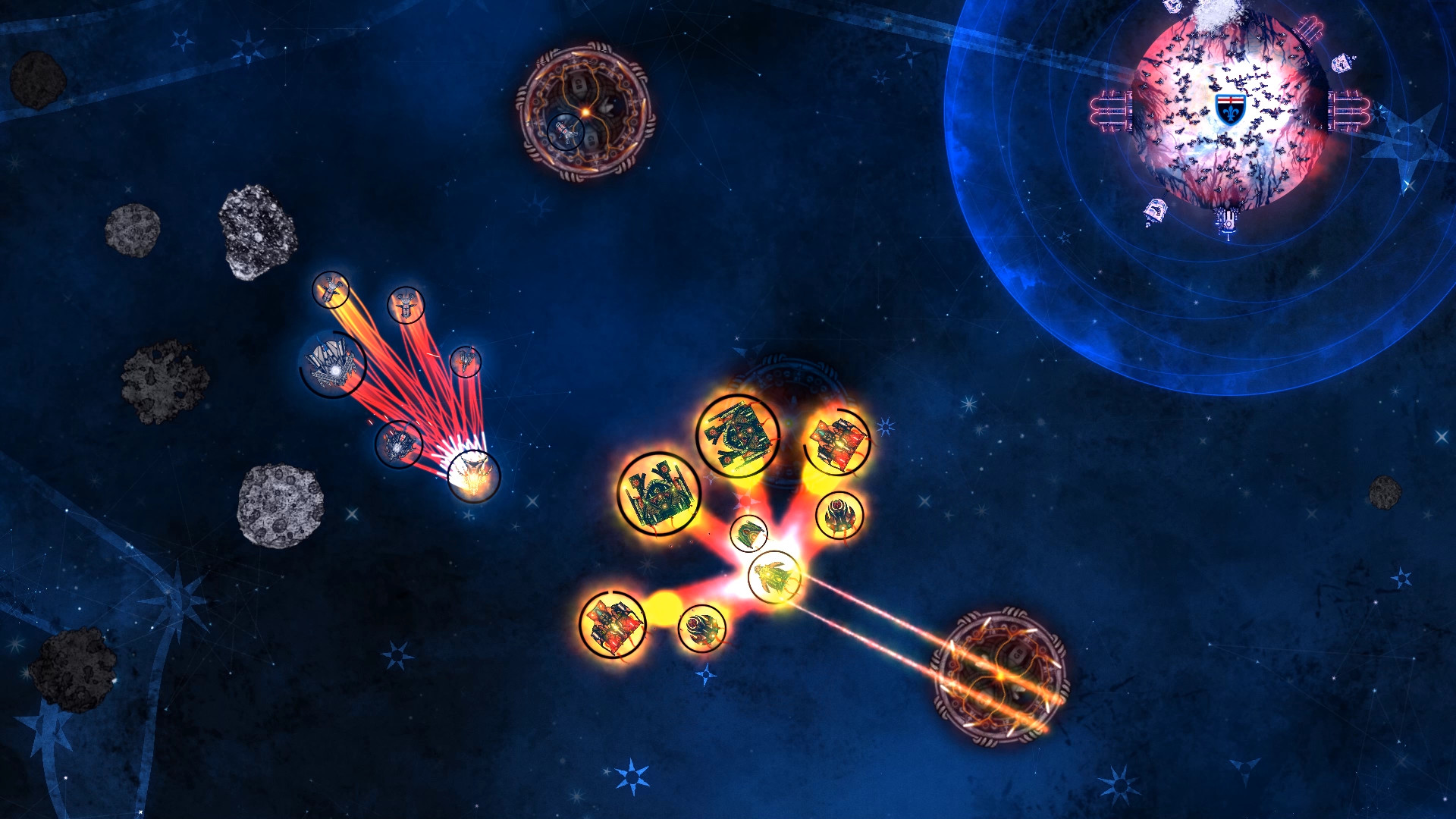 Utilizing these abilities, including basic movement, does come at a cost: metamatter. This resource does constantly regenerate, but planets need to be conquered to power a true fleet. Conquering a planet is simple in theory. All that needs to be done is send the proper resource ship close enough to the planet to pour friendly poultry onto the planet. Of course, the enemy is trying to do the same thing, resulting in epic battles for this much needed resource. Here is where some classic, tried and true strategy can rear its head. In the only multiplayer game I won, I dedicated enough ships to make my opponent believe that I was focused on keeping the planet. While he (or she) was focused trying to clear out my force, I managed to maneuver enough ships into place to pelt his/her mothership with enough asteroids to make an Atari game. This feint, combined with the use of the mechanics, will probably remain my fondest victory for quite a while. The rest of my multiplayer experience with this title was not so glorious for me.

Introducing so many unfamiliar mechanics and concepts is a daunting process, and Artifice Studio did a respectable job at this. The tutorial covers the bare basics just fine while the first few missions eases the player in quite well. Even so, it is easy to hate this game at first. It’s frustrating to have to wait out a timer and spend resources to adjust a missed shot for ship placement. Even a simple arrow to assist with aiming requires the cost of valuable resources. The opening battles of the campaign don’t help. By necessity, these are slow paced and contain little action. Even so, the feeling of “doing it wrong” is palpable. When it finally clicks, when possibilities open start to make sense, this title comes into its own. 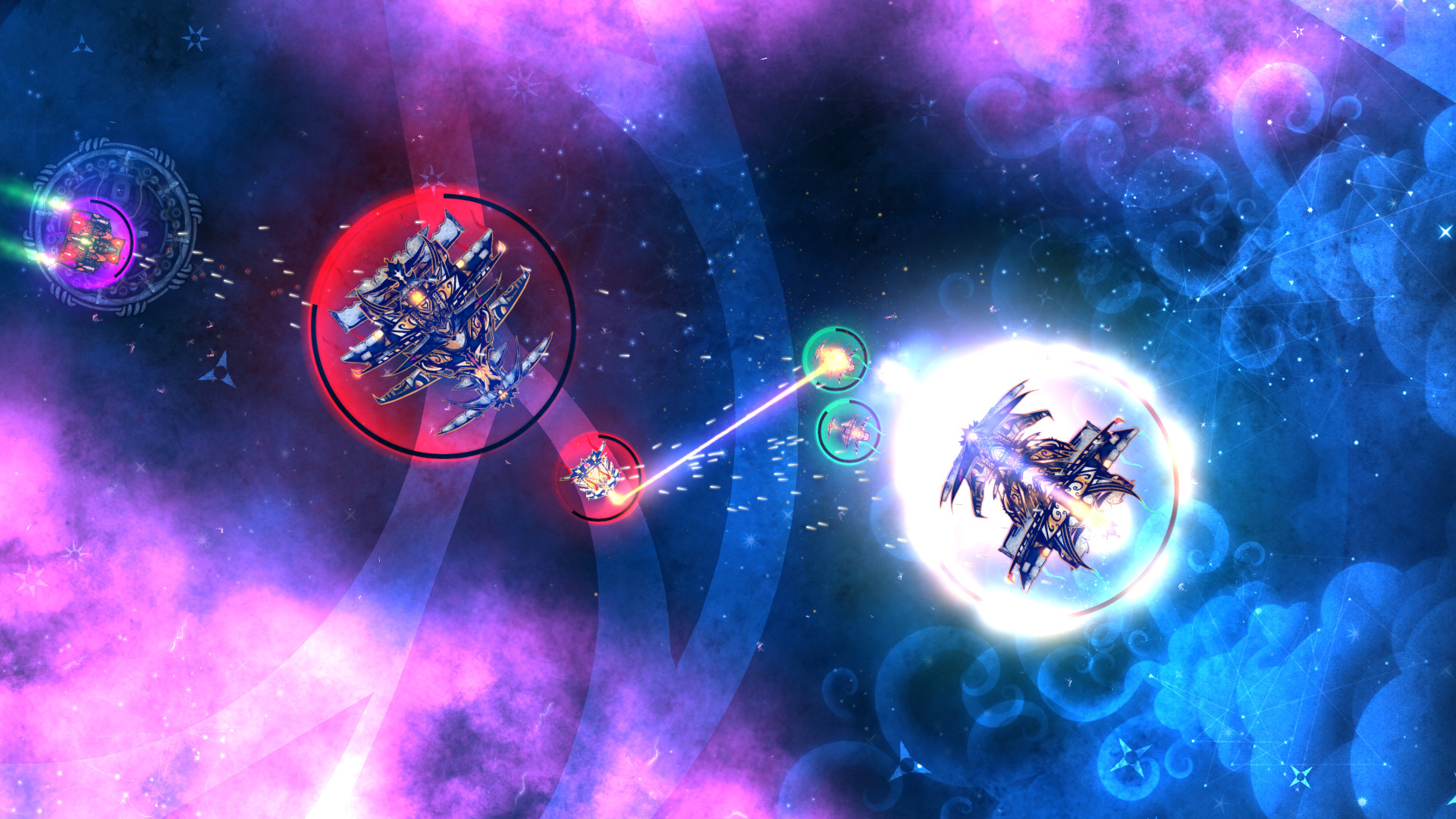 Fortunately, the story and writing keeps the player invested. Obviously, the narrative is filled with non sequitur humor. Instead of just throwing random words and concepts at the wall and skating by with being absurd for absurdness’ sake, however, the concepts of this world make their own form of sense. Yolks are starship fuel. The set up is there so that makes sense. Dueling a rival for the right to rescue a comely lass from a boring days long dinner party is just how things are done. The story is splendid and the universe is intriguing. If Terry Pratchett wrote the Star Trek reboot, it might come out something like this.

The only other knock on this title would be in the graphics. When zoomed in close, the ships do have a great bit of detail. The overarching design philosophy seems to be “steam punk meets cultural iconography.” In order to properly plan actions and make use of the environment, the camera must be zoomed out. The detail is lost and what is left gives the appearance of a mid-90s space title. The flavor is just lost. 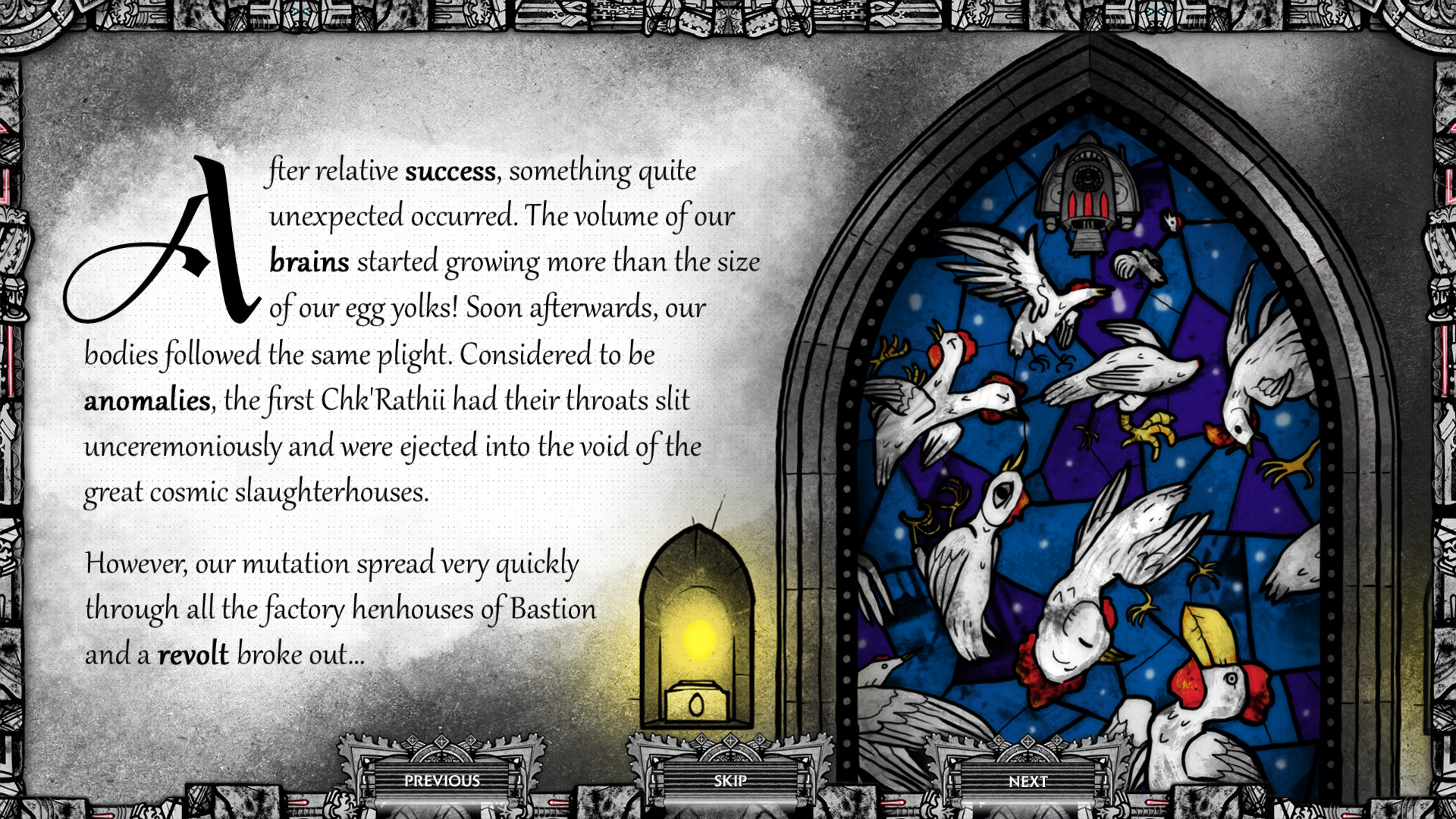 Conflicks is like eggplant: it’s a taste that requires effort to acquire. Once the feathers get smoothed out, though, there is a robust, entertaining game to explore. The battles become tense tests of creative thinking without forcing the players to figure out the solution the developer had in mind. Making use of each type of ship’s abilities in diabolical ways allows the player to feel like an evil genius, even when playing as “the good guy.” Plus, unlocking the Steam achievements also unlocks permanent in-game buffs. That is clucking awesome.