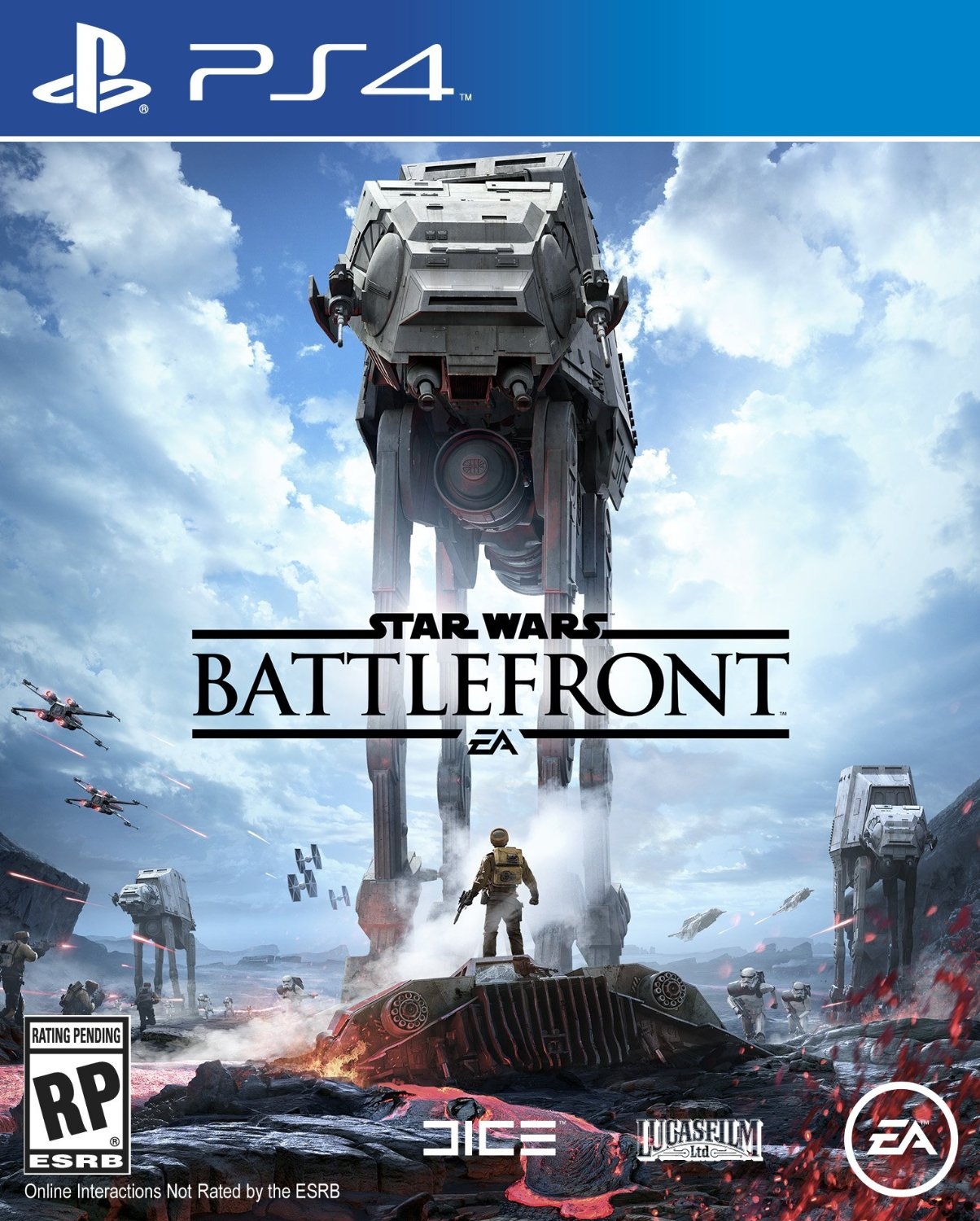 It was never going to be easy for publisher EA and developer DICE to create Star Wars Battlefront. Creating the follow-up to one of the most beloved Star Wars games of all time, Battlefront 2, is a daunting task even for a developer as seasoned as DICE. Star Wars fever is at an all-time high thanks to Episode VII: The Force Awakens coming out in about a month, but first we have Battlefront, the first of EA’s slew of Star Wars games. It easily nails the style of Star Wars, but does it have enough substance to keep players playing?

DICE nails the Star Wars experience from a presentation perspective. Battlefront is a gorgeous game to look at and listen to. Dynamic lighting, detailed textures and meticulously crafted environments all work together to create a wholly authentic Star Wars experience. DICE used a technique called Photogrammetry to recreate the many models and environments of the film in-game, and the results are spectacular. It’s breathtaking seeing the fresh snow of Hoth or the forest of Endor right before a deadly battle and then watching as blaster fire and explosions tear it apart. Weapons, vehicles and Heroes were all created using this method.

The sound design, aside from the awful Hero voice-acting, is also spectacular. John Williams’ classic score is littered throughout with specific themes used to herald the arrival of heroes and villains. Much like the models and environments, the sounds of the different blaster rifles, vehicles and explosions have been faithfully recreated for the game. This adherence to recreating Star Wars makes the awful hero and villain voice-acting stand-out. Why DICE couldn’t pull lines from the films, or attempt to get the original actors is a mystery. 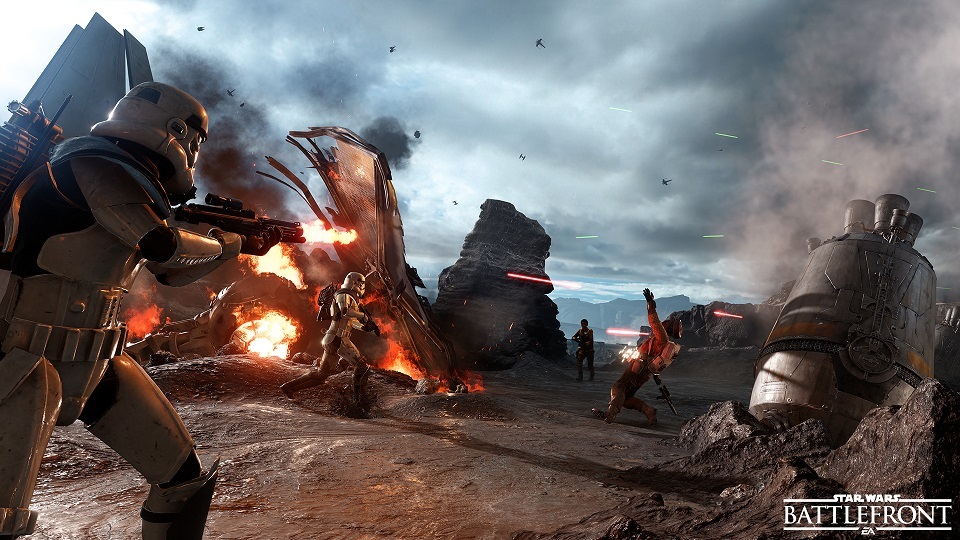 Battlefront is a deviation from the standard FPS formula DICE has employed across its many games. Battlefront ditches single player for a multiplayer-focused experience with a few co-op modes thrown in for good measure. Likewise, gameplay is severely stripped down compared to Battlefield in an attempt to appeal to a wider audience. Hero characters make their return from Battlefront 2, and are more fleshed out with unique abilities.

Battlefront’s gameplay is simple, but has its own kind of depth. Battlefront can be played as either a first or third-person shooter with each having its own advantages and disadvantages. First-person is more accurate, but the field-of-view is extremely limiting. Third-person sacrifices a bit of accuracy for a better view of the battlefield. Overall though, aiming down the sights doesn’t really matter, nor does the gun you take into battle. There are only eleven guns and it becomes hard to distinguish one blaster from another. Sure, some fire faster than others and some have a three-shot burst, but they all come off the same. There are no assault rifles, PDWs, shotguns, DMRs or LMGs with all kinds of different stats. It’s simple and trying out different blasters in Battlefront doesn’t have the same feeling as trying out different types of guns in Battlefield.

It’s Battlefront’s Star Card and Hero systems that supply the majority of its depth. Battlefront doesn’t have classes, instead replaced by Star Cards, a form of create-a-class. Players can equip two Star Cards and a third Charged Star Card. Star Cards are weapons and gadgets that have reload times. Charged Star Cards are special modifiers that require a charge battle pick-up to use. These can be ammo modifiers, personal shields or even a scan pulse that shows where enemies are on the battlefield. Smart players will create different Hands to tackle different situations. Someone who wants to snipe will want to equip a rifle, the jetpack to get to high ground and Focus Fire. On the other hand, someone who wants to focus on taking out vehicles will want to equip the Ion Grenade, Ion Torpedo and Ion Shot. There are a total of thirteen Star Cards and six Charged Star Cards, allowing for numerous possible combinations. 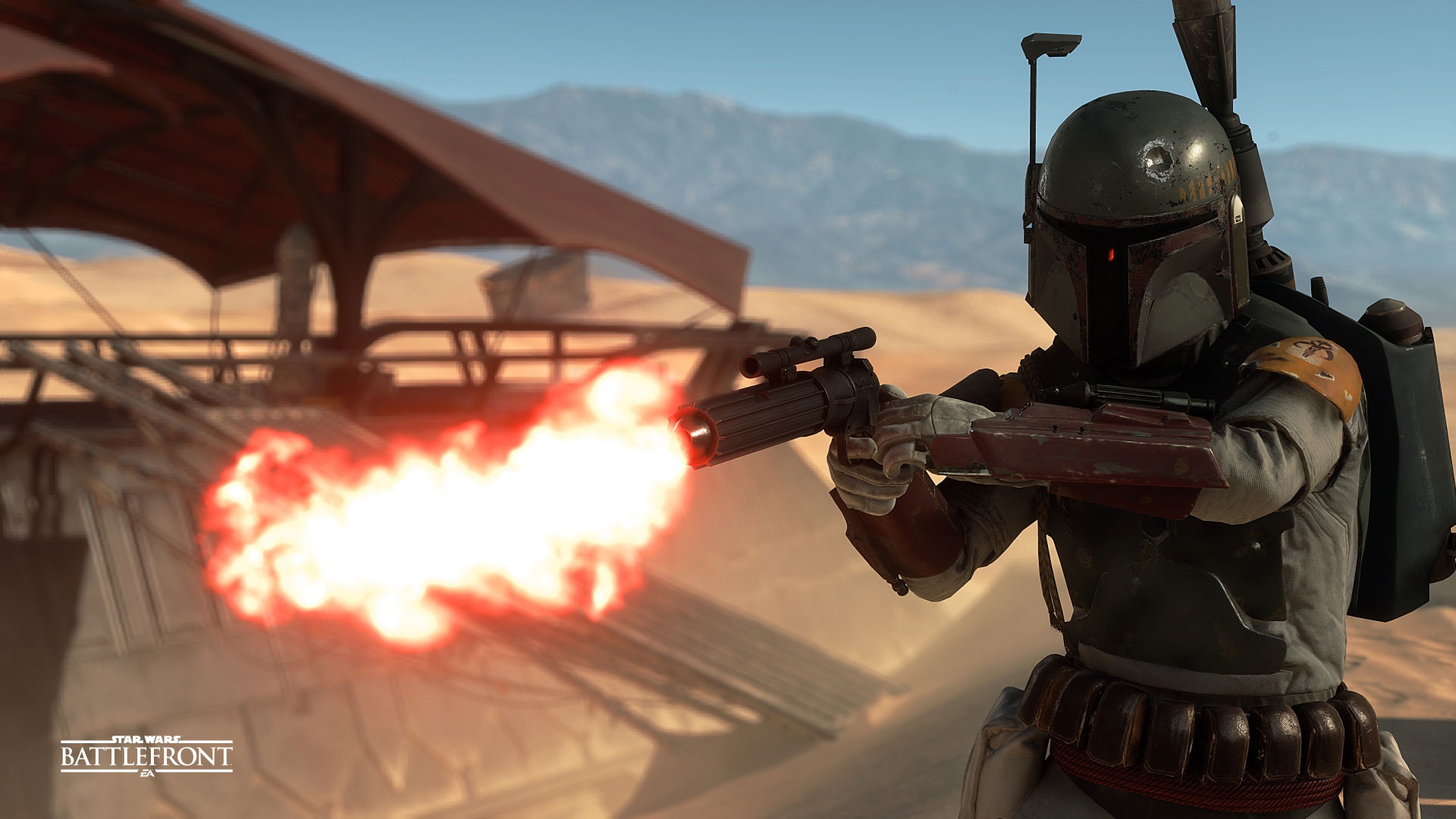 Heroes also add a nice layer of depth, acquired as a battle pickup while playing Walker Assault or Supremacy. Players can choose between the melee (Luke Skywalker and Darth Vader), sharpshooter (Han Solo and Boba Fett) and support (Princess Leia and Emperor Palpatine) heroes. Each has three unique abilities and each is useful in their own ways. Health does not diminish over time, with smart players being able to make heroes last entire matches.

Vehicles make their controversial return as battle pickups. Rather than finding a vehicle on the map, á la Battlefield and older Battlefront games, players must find the vehicle’s pickup on the battlefield and then summon it. Piloting a vehicle isn’t as difficult as in Battlefield 4, but does require a certain degree of skill. Learning when to speed up and slowdown in aerial dogfights is the key to success. Slowing down while turning will allow you to stay locked-on to your target and hopefully destroy them. 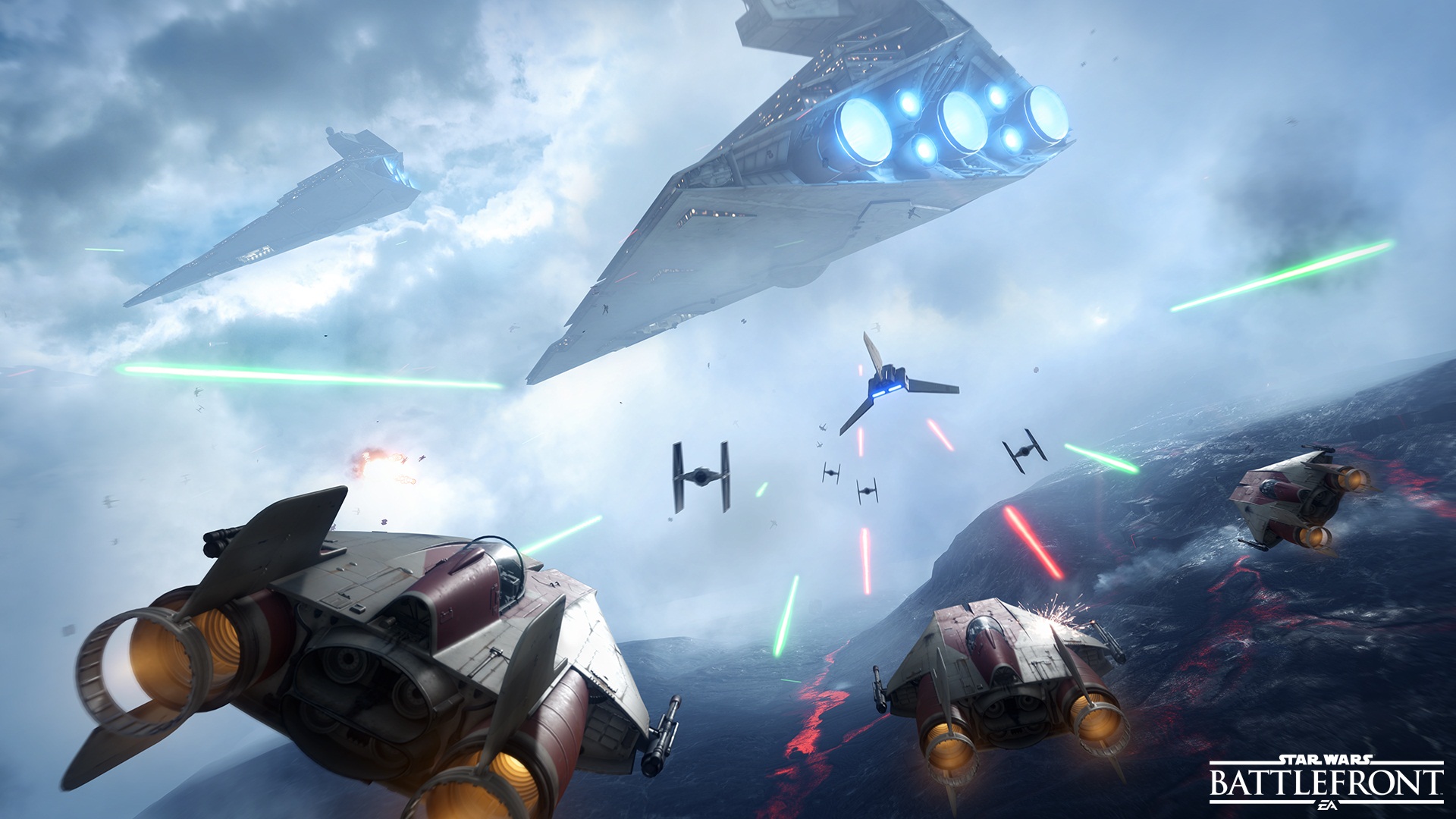 There are a total of nine multiplayer and three co-op modes. In co-op you have Training, Battles and Survival. Battles can be fun if you and a friend want to mess around with the Heroes, but overall isn’t worth spending much time with. Survival pits you and a friend up against fifteen waves of Imperial soldiers. The A.I. is weak, so if you want to play this, it is suggested you raise the difficulty.

Things are bit better in multiplayer. Supremacy, Walker Assault and Fighter Squadron are the big marquee modes featuring forty player battles, vehicles and heroes. Supremacy is a blend of Conquest and Uplink. Each team starts out with two command posts and must battle over the third. From there it’s a game of tug of war. Walker Assault is a fresh take on Rush Mode. Rebels must capture and hold uplinks to summon Y-Wings, which drop charges on AT-ATs. Balance for this mode has been tweaked from the beta, giving Rebels a fair chance. Fighter Squadron is a big aerial fight with both teams attempting to destroy enemy transport ships

These are the best modes in Battlefront, but they quickly become boring due to a fatal flaw: there are only four maps (three for Fighter Squadron). There are just four maps available for these big modes, each taking place on one of the game’s four planets. From a design perspective, the maps never feel that engaging. Much like Battlefield 4’s maps, these feel like they were designed by a team of artists trying to make as pretty of a map as possible. There are plenty of engagements at control zones, but the rest of map feels like it’s there to just be pretty and remind us that it’s Star Wars. This is felt the most on the Endor map. The Jungle is so thick that it can be hard to find and spot enemies. Sure it looks like exactly like the movie, but it isn’t that fun from a gameplay perspective. The recent Community Map from Battlefield 4 is more what Endor should have been like. 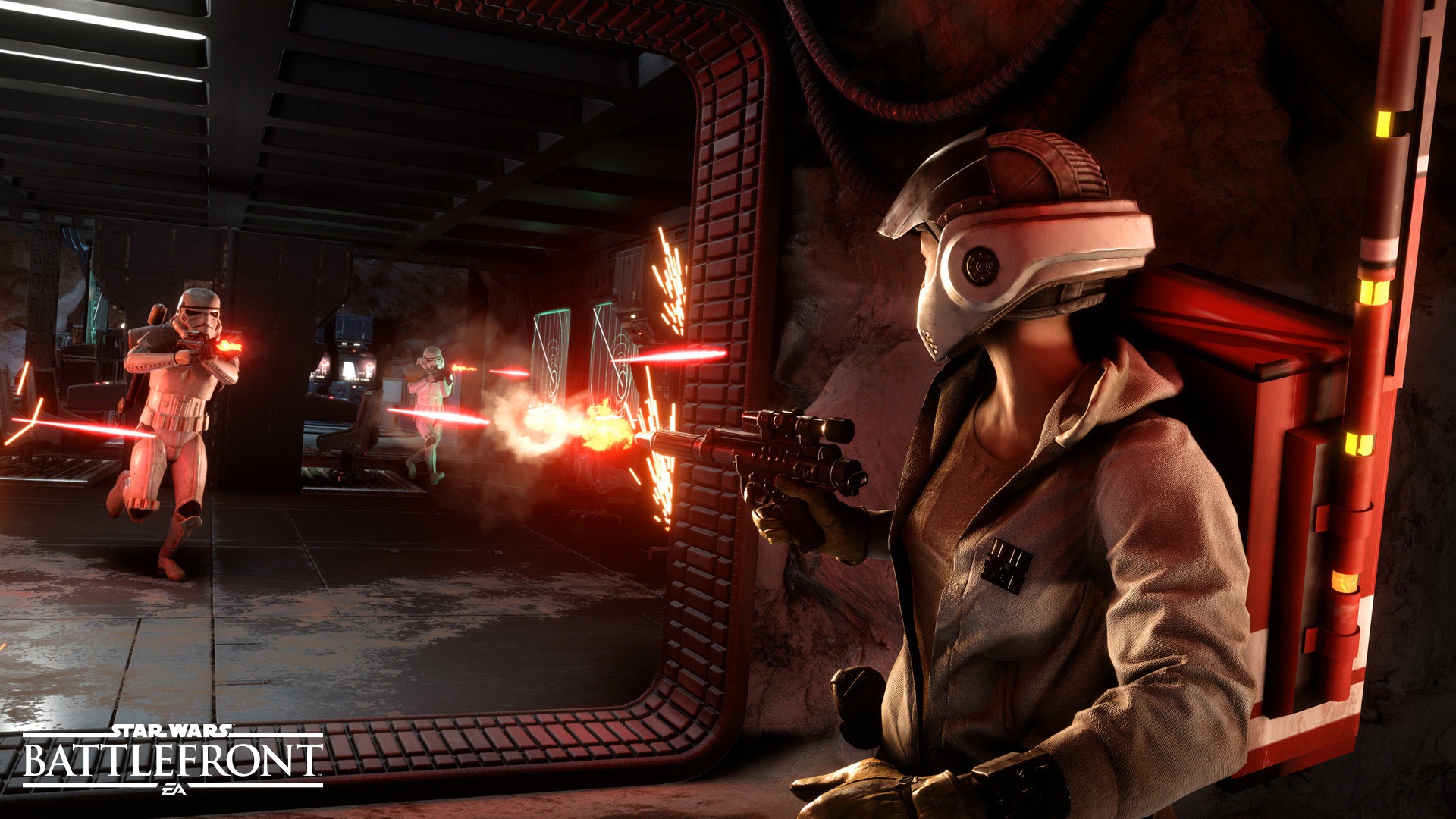 The remaining nine maps are shared across the six other modes. These are all essentially Star Wars versions of classic multiplayer modes. Blast is Team Deathmatch, Drop Zone is Headquarters, Cargo is Blood Money and Droid Run is Domination with the twist that the droids are always moving. These modes are aimed at a more traditional shooter audience, but feel off with the simplified gameplay. There’s lots of chaos and engagement, but rarely does it ever feel satisfying.

Hero Hunt pits seven players against a randomly selected player playing as a Hero and Hero Battle pits the heroes against the villains, with six other players are stuck as infantry. Hero Hunt is miserable when playing as the infantry. Heroes are just so much powerful and it can feel absolutely crushing when you work so hard to bring down a hero’s health only for someone else to steal the kill and become the next Hero. Hero Battles are better with all three Heroes having to work together to take down the opposite side’s heroes. Just like in Hero Hunt, however, it is no fun to play as infantry.

Star Wars Battlefront is a solid proof-of-concept that should be fully realized in an inevitable sequel. Like Evolve, Titanfall and The Order: 1886 before it, Battlefront chooses style over substance. It’s absolutely beautiful and captures what it’s like to be in a Star Wars film, but style can only take a game so far. Star Cards and Heroes help make battles interesting, but the combat is too simplified to create long-term engagement. There is fun to be had, especially when the spectacle of Star Wars is in full effect. That spectacle, however, soon wears off and what’s left is a game with too few weapons, maps and heroes. In the end, Star Wars Battlefront is all Binks and no Fett.