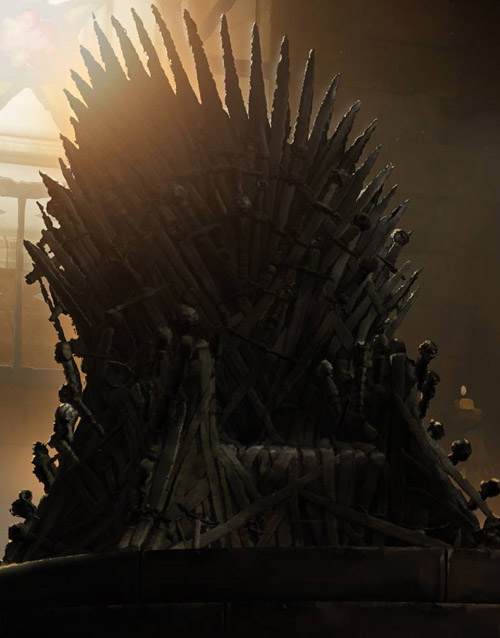 “Is it more important that your choices in a game matter, or that they feel like they matter?”

That’s the question that opened my review of the first episode of Telltale’s Game of Thrones series nearly a year ago and it’s the question that lingered in my mind as I played each subsequent chapter. Playing Game of Thrones feels like walking through a house of mirrors: at first glance, endless paths stretch in front of you — infinite, overwhelming possibility — but you quickly learn it’s nothing more than an illusion. It’s been that way with Telltale’s adventures for some time now, of course. Anyone who’s played one since The Walking Dead knows how they work: divergent choices funneled into convergent paths. They’re movies with light interactive elements in the form of dialogue options and quick-time events. In the moment, it feels like you’re truly shaping the story with your influence, but one trip to YouTube to watch how else it could’ve played out is all it takes to shatter that feeling for good. After six episodes and dozens of hours, I had made hundreds of decisions, but only about three or four in the final two episodes truly changed anything about my experience.

But maybe that doesn’t matter to you. Maybe you’re fine with an experience that doesn’t diverge completely at every juncture, and just want a good story. Maybe you’re a fan of the books or TV show who doesn’t feel like waiting until next year to get your fix, and you’re wondering whether or not the game is any good on that front. Well, it’s really going to depend on what you’re looking for from Game of Thrones. An episode of the game doesn’t feel like an episode of the show. While the latter is tightly paced and gripping throughout, the former is slow, meandering and largely unexciting. Early episodes especially feel padded to the bursting point with filler. Going from playing an episode of the game to watching an episode of the show reveals a stark truth: the game is boring. Plain and simple, you’re not going to get nearly the same level of quality in the storytelling here, but you do get a mildly interesting look at events not covered elsewhere. 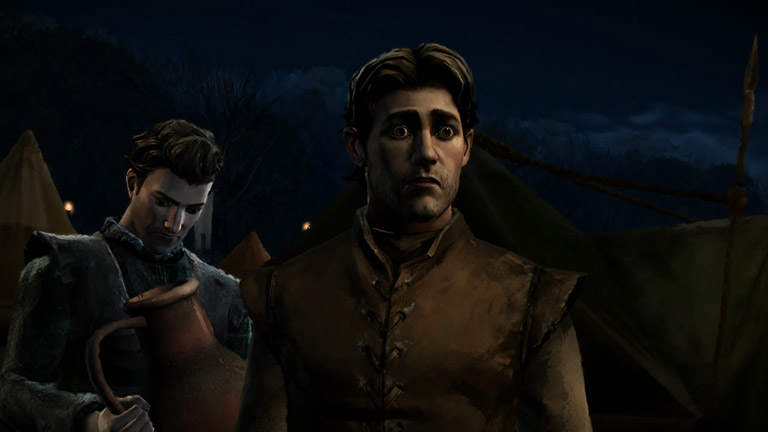 Telltale’s Game of Thrones focuses on the fallout of the infamous Red Wedding from the perspective of House Forrester, a little-known family that hasn’t made an appearance in the show but is mentioned briefly in the books. All the Forresters can do in the aftermath is desperately try to stay afloat against the currents of change. Even if their fate is but a minor blip on the Westeros radar, their tale is still a harrowing one as rival House Whitehill attempts to use the event to seize control of the lucrative ironwood trade and wipe out the Forresters out for good. Over the course of six episodes, you’ll play as several different members of the Forrester clan as each tries to do their part to keep the family alive. Some are short-lived affairs as a swift death comes by surprise and a replacement Forrester is brought in to fill the gap. Even if who lives and who dies is ultimately set in stone and unaffected by your decisions, in the moment you’re never quite sure whether a given character will make it through to see the next episode; encounters with infamous characters from the show like Ramsay Snow and Cersei Lannister can be genuinely nerve-wracking as a result.

Still, even if you’re just in it for the story and OK with the idea of being funneled down a linear path rather than a unique one that truly reflects the choices you’ve made, the quality of the script suffers due to the concessions made to accommodate these choices. Characters aren’t having conversations with each other so much as talking at one another without much regard for what was just said. In Episode Three, Gared welcomes a familiar adversary to Castle Black, so I selected a dialogue option labelled “Welcome to Castle Black.” Instead, Gared said, “Welcome to the Wall, brother,” to which the other character responded, “Looking forward to it, boy.” Conversations consistently feel disjointed as Telltale’s scripts are never fully up to the task of adapting to the player’s choices. During my second playthrough of Episode Six, I experimented by selecting the ever-present silence option every time the game wanted my input as Gared to see how differently characters would react. As it turns out, not much at all. Once, a character said “I’ll take [your silence] as a yes,” but beyond that, conversations played out exactly as they had in my previous playthrough where I carefully considered each dialogue option and how it would affect my standing and goals. It’s more than a little discouraging to see how little the game values your input from a standpoint of player agency, but more than that, it results in a story where characters don’t feel believable and events unfold nonsensically as the game course corrects to keep you from straying too far from the desired path. 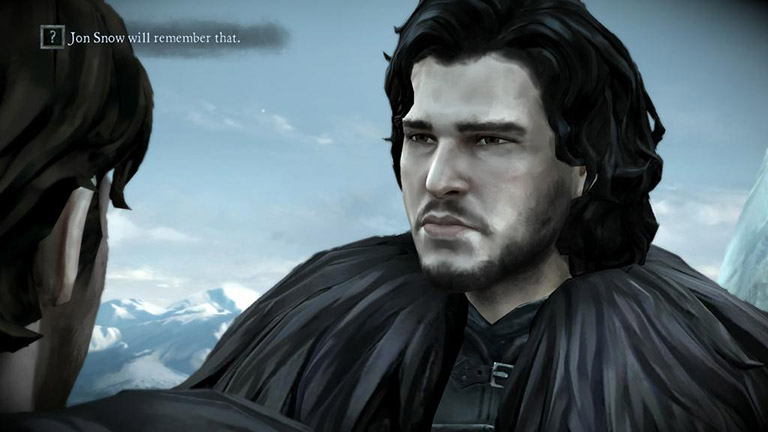 Action scenes in Game of Thrones are handled via quick-time events where you’ll need to press a specific button or move the analog stick in a given direction to correspond with onscreen prompts. Fights are decently choreographed, but they never feel as dynamic as those in similar games like 2010’s Heavy Rain. In that game, when you missed a prompt, the fight changed to match it: your character might swing wildly and miss instead of landing a well-directed strike, or fail to dodge out of the way of an attack and get hit. In Game of Thrones, miss a prompt and you’ll either be met with a “Valar Morghulis” game over screen or the scene will continue unchanged. During the final action scene of the season in Episode Six, for my second playthrough I simply stopped following the onscreen prompts, either hitting the wrong button on purpose or nothing at all; while it resulted in a few deaths, most often the character would still attack, defend or dodge the same as my first playthrough when I hit everything perfectly.

Likewise, Telltale dropped the ball when it comes to presentation and general technical stability. Game of Thrones is available on nearly every platform under the sun from mobile to consoles to desktop PCs, and it’s clearly much more than the developer was able to handle. For the game to maintain a consistent aesthetic across all platforms, it can’t take advantage of any particular one. As a result, the PlayStation 4 version we played had an ugly presentation and myriad technical issues. Telltale went with a watercolor art style to hide the limitations of its engine, but it’s nothing more than a cheap filter on the same engine it used in The Walking Dead years ago. The style just doesn’t work, leading to muddy textures that look much better up close than far away, the opposite problem most games face. Animations are done by hand instead of motion capture, and it shows; movements are stiff and cartoonish, a constant distraction against the drama and seriousness of the story. Bugs and glitches pervade every aspect of the experience, with constant hitching, frame rate drops, out of sync lip movements, characters that appear or disappear at random, and the list goes on. In Episode Six on PS4, Telltale even left in directions from the mobile version of the game to “swipe up” during an action scene and the graphic for Xbox One’s B button instead of the PS4’s circle button. 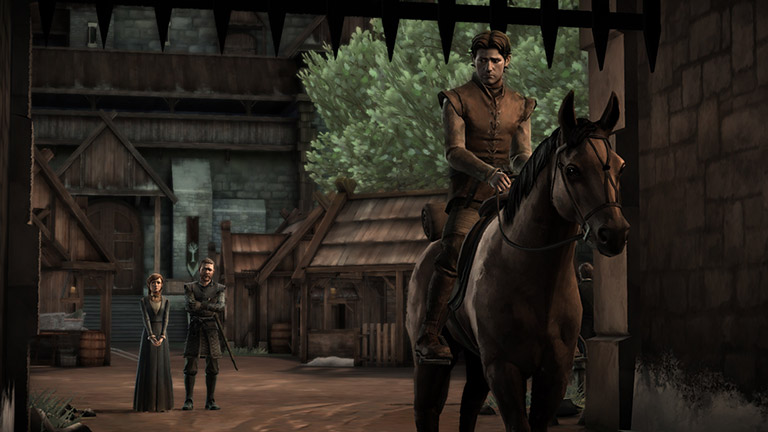 In a world where Dontnod’s Life is Strange proves that episodic adventure games can look great, be smartly written and challenge the player with engaging mechanics and puzzle-solving, Game of Thrones isn’t worth your time. Telltale’s original story pales in comparison to the source material and it’s not an especially satisfying adventure game, either. Your choices matter about as much as the points in Whose Line Is It Anyway? and the game’s action scenes barely register whether or not you’re even holding the controller. Even if you’re a fan of the books or HBO show, there’s not much incentive to play Telltale’s Game of Thrones.