Final Fantasy XV is due out sometime next year after being in development for nearly a decade. Thus, it make sense that Square Enix would begin to talk more heavily about the game right around this time. In the latest news regarding the prominent Japanese game studio’s forthcoming installment of their largest franchise, an Xbox One special edition Final Fantasy XV controller has been revealed by Play Asia. At this point, though, there’s been no mention of a worldwide release for the controller, as it appears that it’s only the Asia market is being targeted for its release.

This wouldn’t be the first time that Square Enix and Microsoft partnered up for the release of a Final Fantasy game; they collaborated on XIII’s release in the East several years back. So it’s likely they are doing the same thing again this time around. That being said, the controller itself is beautiful. So many of these special edition controllers are gawdy or half-baked; this one, however, is gorgeous and looks well-conceived. It will be interesting to see if a DualShocker4-branded pad is also in the works.

Nevertheless, Square hasn’t officially commented on the controller yet, but keep it locked here for more news as it comes down the pipe.

[UPDATE 12/2 10:24 PM PST] Square Enix has (unfortunately) stated that the controller is a fake and will not see release. 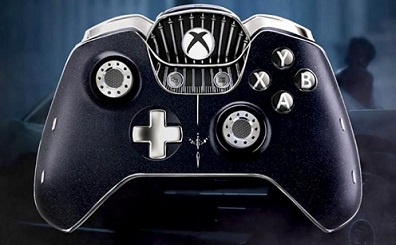