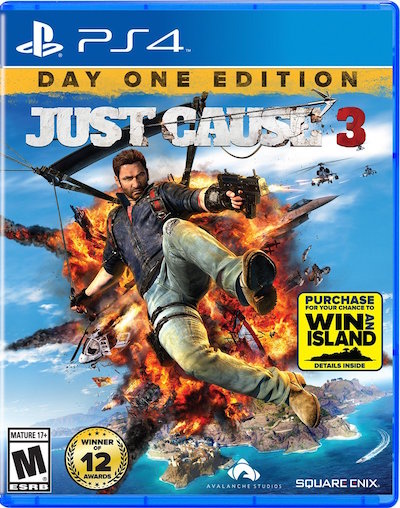 It’s a crime that it’s taken nearly six years for a new Just Cause. Exploding (figuratively and literally) onto the scene in 2006, the series quickly came into its own with 2010’s Just Cause 2. Refining practically every issue with the first title, Just Cause 2 is a game that can be enjoyed for a indefinite amount of time. Sadly another last-gen sequel wasn’t meant to be and Square Enix instead waited two years into this console generation to once again unleash the madness. With most of developer Avalanche’s Sweden studio focusing on the development of Mad Max, their New York office took on the Just Cause 3 development and hired numerous ex-staffers of Criterion Games to round out the team and boy does it show. This is the most ridiculous, over the top Just Cause yet, designed solely around a single element: blowing $#^! up.

Just Cause 3 takes place several years after the events of Just Cause 2, with protagonist Rico Rodriguez severing ties with The Agency and heading out to his homeland of Medici, a fictional archipelago that has been seized by the brutal dictator, General Di Ravello. The General has turned Medici into a military state, installing a sizable amount of military bases and oppressing its population wherever possible. Rico won’t stand for this, so he teams with past allies like Mario, Tom Sheldon, Dimah and more to overthrow the violent dictatorship. That’s about as deep as the story gets, with most of the interactions and cutscenes simply excuses to set up an absurd action climax, but that’s just fine. Just Cause has never been about story, but rather simply causing chaos, a conceit Just Cause 3 fully embraces.

Just Cause 3 takes place in the giant open world of Medici, encompassing over 400 square miles. It’s ultimately up to the player on how to tackle it all, but there is a campaign comprised of main missions. Much like Grand Theft Auto, as fun as simply tooling around in the world is, these missions highlight everything great about the game and are set up for maximum destruction. Mission variety is high and all sorts of things are accomplished, but expect to do things like destroy giant convoys of pursuing military vehicles whilst standing on top of a speeding truck or taking out multiple targets whilst plummeting through the air after jumping out of a plane. 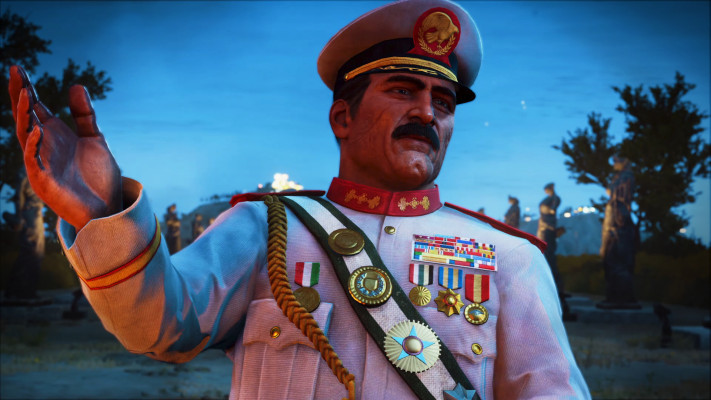 As enjoyable as the main missions are, practically everything else is a blast as well. One of the main side activities to accomplish is liberating enemy bases and towns. To accomplish this, Rico simply storms through the gates and (surprise, surprise) starts blowing up everything in site. Certain things must be blown up (like radars, satellite dishes, transformers, etc) and a certain amount of overall destruction must take place to liberate a military base. With so much to destroy and plenty of firepower and gas tankers standing by to do it, these moments are where some of the most ludicrous levels of destruction take place. It’s sometimes possible to destroy nearly the entirety of bases at once, conjuring enough fire to burn down the entire island. Towns are liberated more liberally, with the goal being to bring down all the propaganda including billboards, speaker systems, statues and more. Upon liberating either, vehicles and weapons are unlocked for Rebel Drops. These supply drops take the place of in-game currency and allow players to snag any weapon or vehicles at any time provided a beacon is available. Don’t think this makes things easier, however, as enemies match firepower (which can lead to some ridiculous firefights).

Liberating oppressed towns and bases also unlock numerous challenges including Land/Air/Sea Races, Shooting Gallery, Destruction Frenzy, Crash the Bomb and more. These challenges are almost all a blast and thanks to the asynchronous multiplayer, leaderboards with best times are constantly displayed to compete against. These challenges are completed for more than just bragging rights, however, as they unlock Gears which can then in turn be used on Mods. Believe it or not, Mods make things even more outlandish as they unlock things like rocket-propelled planted explosives, a Spider-man-like Re-Reel ability, nitrous and much more. These can be toggled off after unlocking to keep things more realistic (ha), but some of these result in some moments of pure euphoria.

A world so big is going to take multiple ways of traversal and thankfully Just Cause 3 has these in spades. When we’re talking about in-game vehicles, we’re not talking about mere tanks or cars. No, we’re talking about friggin’ cargo planes, assault choppers, bomber jets and naval destroyers. The scale of vehicles (or more accurately weapons of mass destruction) is large and allow matters to be taken to the land, air or sea. As great as it is island hopping in a jet, however, the wingsuit is the real star of the show. Ever since wingsuits broke through the mainstream several years ago, it’s been impossible not to be captivated by their gracefulness. After all, since the days of Copernicus, man has dreamed of flight and this is now possible in Just Cause. By utilizing the wingsuit, parachute and grappling hook, it’s possible for skilled pilots to fly around for minutes at a time and see everything the item has to offer. It’s a beautiful and freeing experience in a game so full of such wonted destruction and also an efficient means of transportation. For those who don’t feel like flying around for some reason, fast travel can be utilized to instantly arrive at destinations at the cost of a flare. 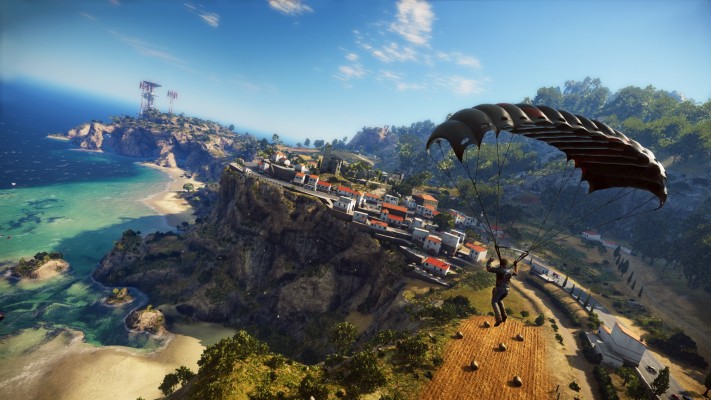 The adjective “ridiculous” has been used several times in this review as it’s the most apt available. Just Cause 3 is a ridiculous, over-the-top experience that wants so hard for you to blow it up. Playing around its 400 square miles, it’s almost as if the game can be heard yelling “OH MAN, THAT WAS SICK” in the background. It’s hard not to feel like a complete badass as you fly around the island dropping grenades and vaulting enemies into the air; in fact, you basically have super powers. There’s hardly an ounce of originality in Just Cause 3; it cribs its features from a myriad of different games before it (including racing games), but it positions everything primitively great about video games into a single explosive package. Horrendous loading times, a lack of synchronous multiplayer and optimization issues hold it back from pure bliss, but Just Cause 3 is an absolute blast, an experience equivalent to a shot of adrenaline straight into the heart.