The world is filled with sights to see and adventures to quest after, but a lowly level 1 hero is unlikely to survive to see much of it.  There are dangers out there ranging from mildly problematic to just plain deadly, and seeing as the hero of Poi is just a kid, no matter how eager and daring, it’s probably best to have a more experienced adventurer take them under his wing.  At the moment there are only two levels and a handful of challenge areas to explore, but it doesn’t take too many fireballs to the head to turn a plucky young adventurer into a singed and defeated newbie.  The 3D platforming world of Poi is just getting started, but already shows that it understands the lessons of its N64-style inspiration.

Poi is a classic-styled 3D action platformer starring either a boy or girl adventurer out exploring the world, tracking down medallions as proof of their platforming prowess.  They’re under the guardianship of an old man, the Master Explorer, who limits access to the levels until he deems them skilled enough to survive.  In practice this means that you’ll need to complete a few challenges in one world before the next opens up, in the normal means of progression for this type of game.  Poi owns its platforming heritage completely, making no attempt to be something bigger than it’s supposed to be, and that goes a long way towards making it both easily accessible and instantly likeable. 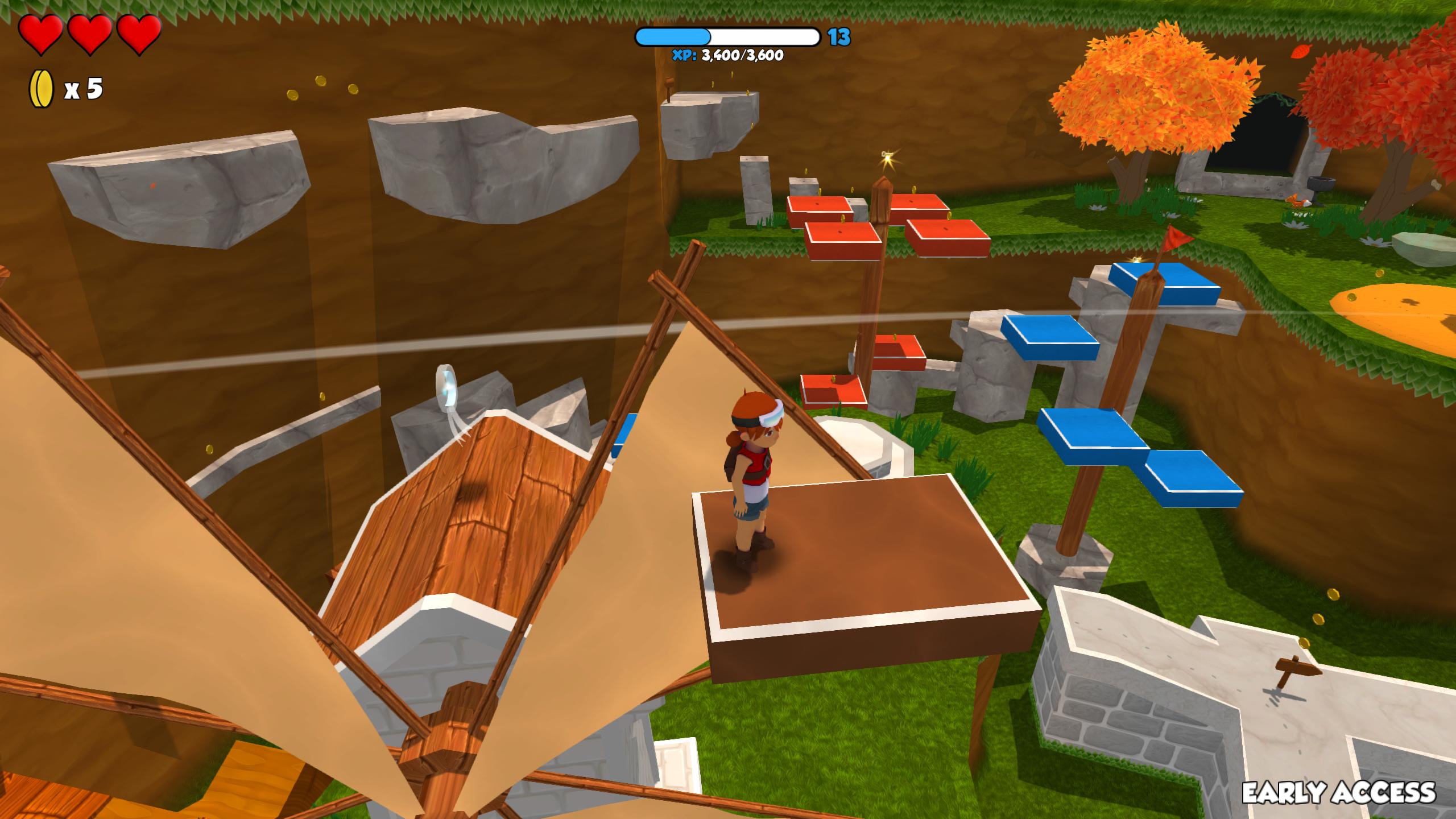 Take the first of the two levels currently available, for example.  You enter the world with a single instruction and brief camera-pan to show the goal, which is to get the medallion on top of the windmill, and then it leaves you alone to either chase after it or not.  Personally, I had to play the level three times before finally following instructions, because I kept getting sidetracked by the other medallions turned up by a bit of exploration.  Pick up 100 coins, a medallion becomes available.  Hit the switches in the caves and a series of platforms opens up a path to another medallion.  Follow instructions or explore as you like and Poi is more than happy to accommodate you.  Neither of the two levels are overly-huge but they’ve got plenty of nooks and crannies to explore, and even a few fun bonus objectives to chase after.

Fossils, for example, are scattered in odd places, and your Explorer Book checks them off as you dig them up one by one.  Each level also has a set of locations to visit, twelve apiece, and finding them all is much easier with the helpful spyglass.  Both spyglass and shovel are available for sale from the helpful, if not overly generous, Master Explorer, bought with the coins banked on completing a level.  Each hit taken while exploring brings with it a coin penalty, but the items are cheap enough that it doesn’t take more than an objective or two before you can start digging for fossils and other goodies.  The levels are filled with items hidden underground, if you just think to dig there. 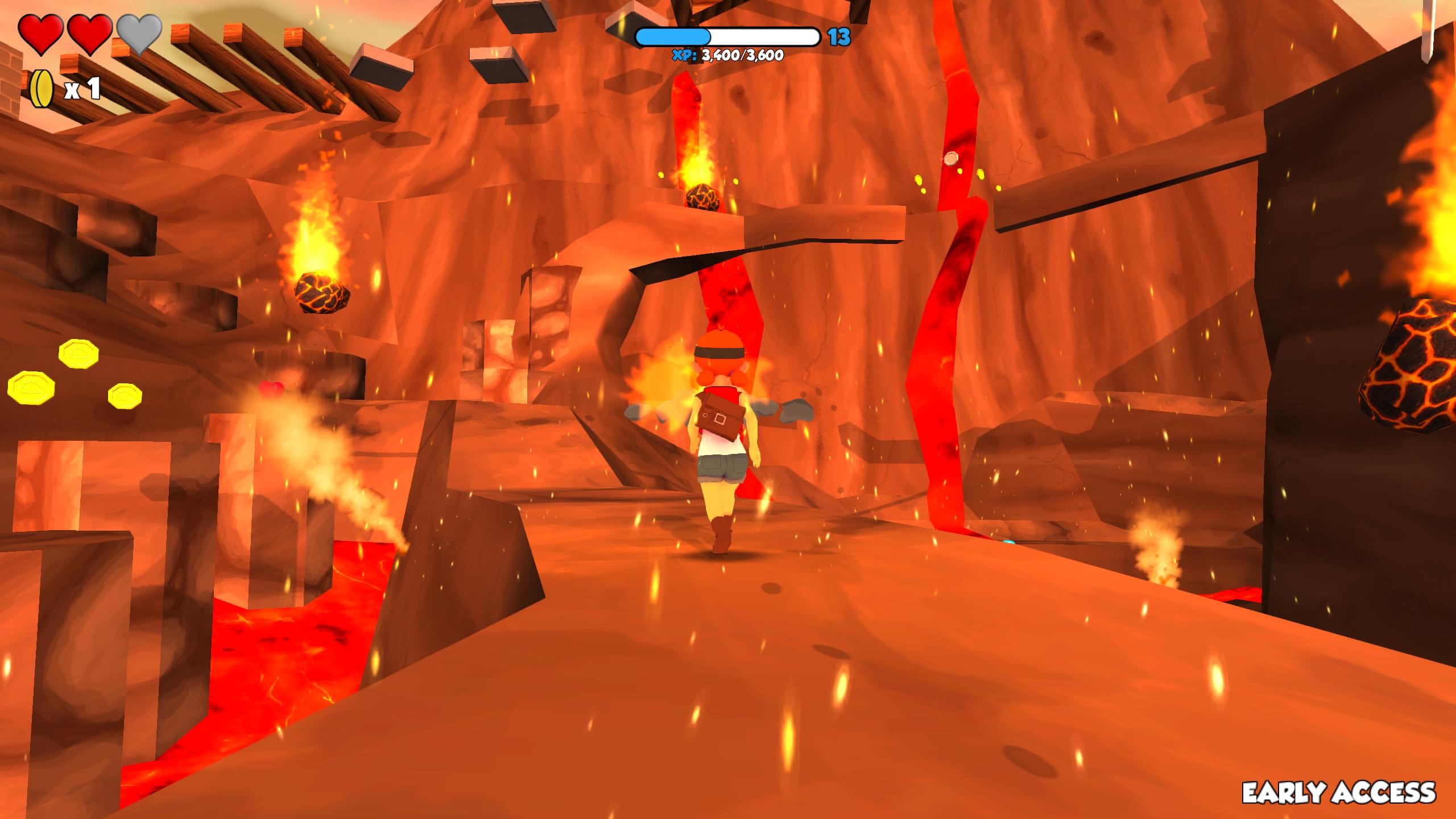 Like all good platformers, Poi has its secrets and tricky areas, and navigating to them needs a good set of moves.  The explorers come equipped with a move-set that will be instantly familiar to anyone who’s played this type of game before.  Jump, double-jump, running triple jump, wall-jump, backflip, and a few others give your adventurer high mobility in levels with plenty of vertical play area.  While there are no enemies to attack or dodge with these abilities, the levels have plenty of environmental hazards to keep you on your toes.  Spikes, lava, and bottomless pits wait to to do terrible things to a careless explorer, and while the two main worlds are relatively easy to clear, the bonus areas put the moveset to the test.  Poi records plenty of stats, and of my 67 deaths I’m willing to bet at least 50 were from clearing the challenge levels.  Each of the challenges is timed, with a leaderboard to go with it, and you have to waste a few lives to learn how to earn a decent spot in the rankings.

While I thoroughly enjoyed my time with Poi, even going to the trouble to 100% all challenges, achievements, and collectibles, it does come with a disclaimer.  Right now the game has two levels and five Challenge Levels, but it’s hard to say what the final form of the game will be.  There’s no plot, just a scenario of exploration, and no information as to how much exploration there’s going to be.  Most likely this is because the size of the final game is dependent on how well Early Access goes, but current plans call for at least two more full levels and an unspecified number of challenge stages, plus a few extra tools to play with. 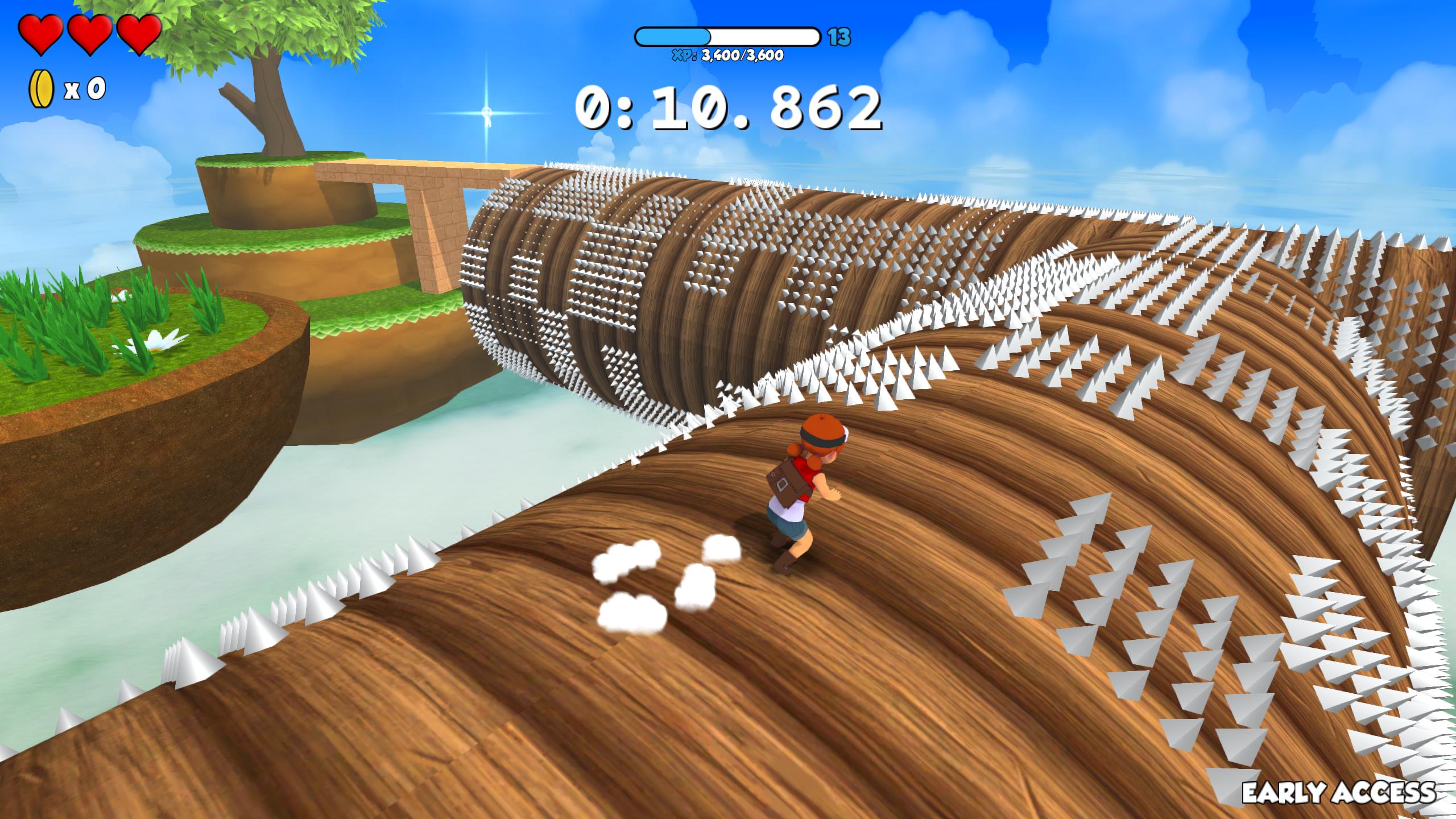 What’s been built so far, however, makes for some excellent platforming adventure.  The two main levels are a bit easy, which is appropriate for the first two levels in any game, but the Challenge Levels get properly tricky fast.  There are a good number of objectives, with the tools to achieve them ranging from exploration to collecting to careful platforming action, and if you’re not in the mood for one type of challenge then the game won’t mind if you decide to chase after a different one.  Poi is a fantastic reminder of why the 3D platformer is so fondly remembered, stripping away all the excess that had accumulated on the genre over the years and leaving behind a set of bright, entertaining and fun worlds to play in and explore.