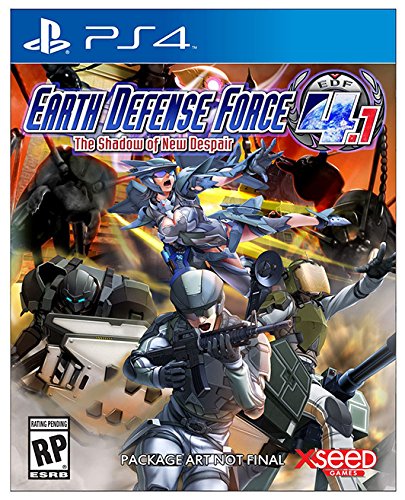 Earth Defense Force 2025 was excellent when it came out almost two years ago, but one of the hallmarks of the series is that it pushes any hardware it’s on to the breaking point.  The sheer volume of explosions, bullets, giant robots and epic insect hordes all swarming the screen at once sees the framerate change from smooth to slideshow, but it’s something series fans have learned to ignore because the shooting is so incredibly fun.  Earth Defense Force 2025 was no exception, but now it’s been re-made, brushed up with new features for the PS4 and given a fresh shiny coat of paint to look and play better than ever in Earth Defense Force 4.1: The Shadow of New Despair.

The giant bugs are back again, having nested underground after their defeat in Earth Defense Force 2015, and they’ve mutated to grow stronger than ever.  The EDF wasn’t sitting on its hands after the alien attack, though, and it’s got not only a new and larger arsenal but also four character classes to choose from that play in very different ways.  Storm One’s Ranger returns same as always, with the strongest basic weapon set and with a fast dodge-roll for getting out of harm’s way fast.  His weapons have a reload time during which he’s defenseless, ranging from a short second or two for the medium guns to a small eternity for the tougher ones.  The fan-favorite Wing Diver is fast but less heavily armored, and instead of ammo her weapons pull from an energy gauge that’s also used for flight.  The Air Raider is a support class, with adequate weaponry but able to call in vehicles and air strikes and access a wide array of helpful tools.  Finally, the Fencer is basically a human tank, slow but able to work two weapons simultaneously.  All classes carry two weapons that can be switched between on the fly, although seeing as the Fencer dual-wields that means he gets four toys to play with at once.  Each class is incredibly powerful when used properly, but the bugs come in numbers large enough that the strength advantage can easily be whittled down to nothing in the heat of battle.

Each level begins at a screen giving several options, which may not be an exciting start but is the only chance to catch your breath between one assault and the next.  You can switch between character classes, check the next level’s description, and choose from an ever-growing arsenal of weaponry in a number of forms.  Guns, rifles, shotguns, short range energy devices, melee attacks, rockets, grenades, tools, turrets, and much, much more are available, and even though each class has their own specific set available, the variety for each is impressive.  Each new weapon comes with a description and set of stats, but frequently the only way to get a proper read on the usefulness of a shiny new toy is to bring it into battle.  A spread-shot that fires in a V might be incredibly useful, or the angle of the shot might be ridiculously wide.  There’s no telling until you experiment, and the reward is as likely to be a favorite new toy as it is to wonder who on earth would find this useful.  Whether you decide to take a risk or play it safe, there will be more than enough targets to put every weapon and tool to work against. 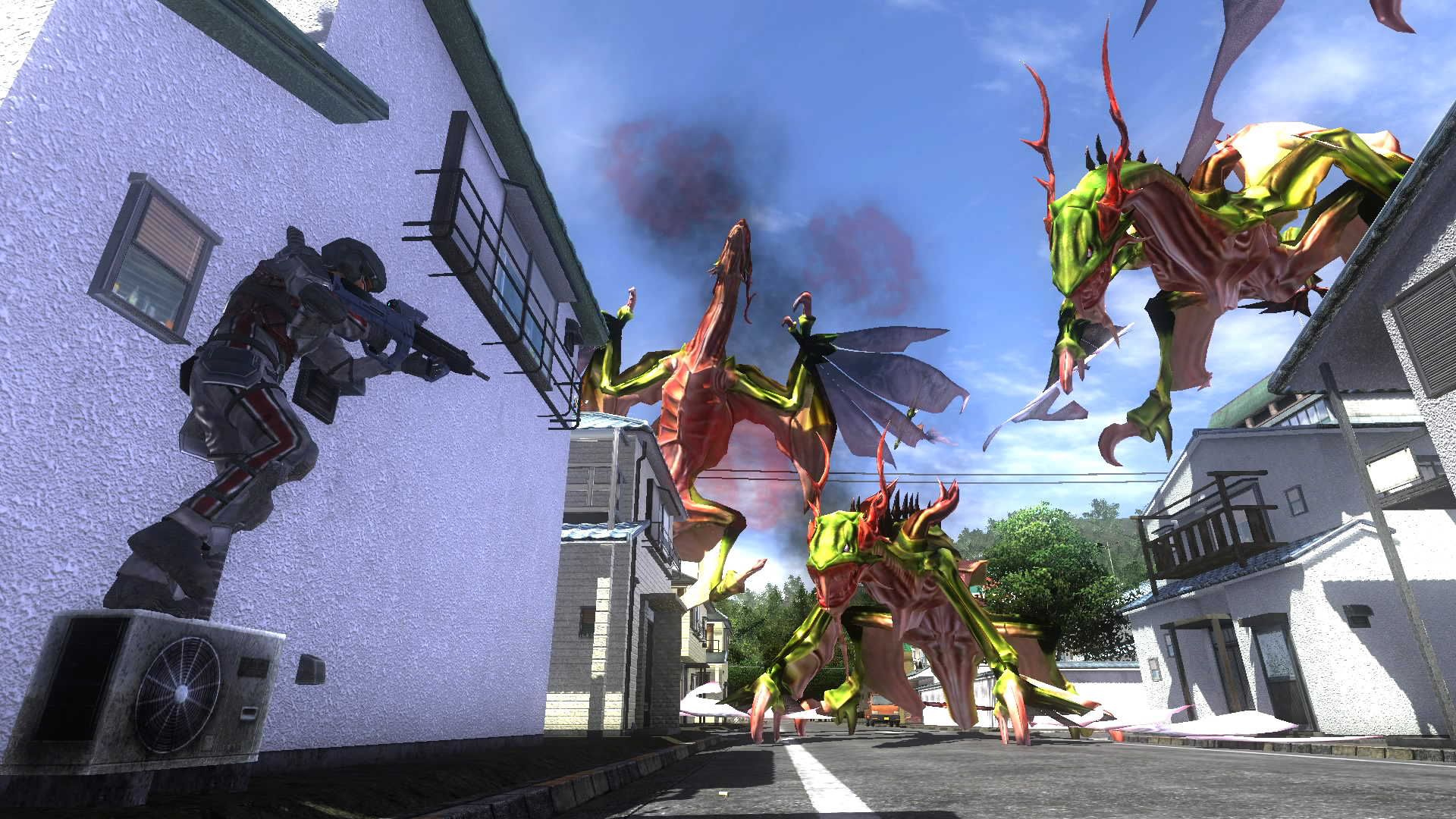 Each level is an encounter against an increasingly deadly swarm of alien bugs and bots.  The basic black ants start off pretty simply, numerous but little more than cannon fodder.  You might get caught by one doing a charge but, seeing as you can shoot back while it shakes you in its jaws, it won’t be a problem for long.  Each destroyed enemy has a chance to drop an item, and seeing as there’s plenty to shoot that means there’s usually a stray health or two left on the map somewhere. The other drops are weapons and armor, but they don’t take effect until level’s end.  Each weapon drop gives you the chance for a new gun, and each armor adds to your permanent overall health.  The classes level up individually, though, so if you’ve got a Wing Diver who’s beaten the game that doesn’t mean your Fencer has anything but the very basic starting weapons.  It only takes a few levels to start building a respectable arsenal, though, and then it’s time to sink into the ridiculously destructive and chaotic scenarios each level throws your way.

Earth Defense Force doesn’t do small.  Each level is a massive open area, with enemies swarming at the edge of your radar.  Giant ants swarm by the dozens, spiders cast webs between skyscrapers, the giant Hector robots shoot beams of plasma that shatter the largest buildings, and massive airborne carriers drop fresh arrivals into the battlefield just when you think you’ve earned a breather.  Shoot at the opening in the carrier and, after it soaks up a pile of damage, it lets off an internal explosion before slowly settling down to earth spouting fire all the way, then letting loose a final sky-shattering fireball in its death throes.  The giant Hector robots are equally as dramatic, and while its massive final explosion on death doesn’t cause any damage, it not only limits your view but makes for an incredibly dramatic fight.  There’s nothing like pounding out waves of firepower while dodging explosive plasma arcs as a screen-rattling explosion fills your entire view and the enemies advance through the burning smoke.  You don’t have to fight alone, though, because the EDF has soldier units deployed to the field that you can join and lead into battle, and while they’re nowhere near as strong as your character they still provide decent backup and can be a big help when the odds get overwhelmingly negative.  The fights only get bigger and more epic as EDF progresses through its 98 levels, with new and tougher monsters being continually introduced to make each battle its own unique encounter, and every little bit of help is more than welcome. 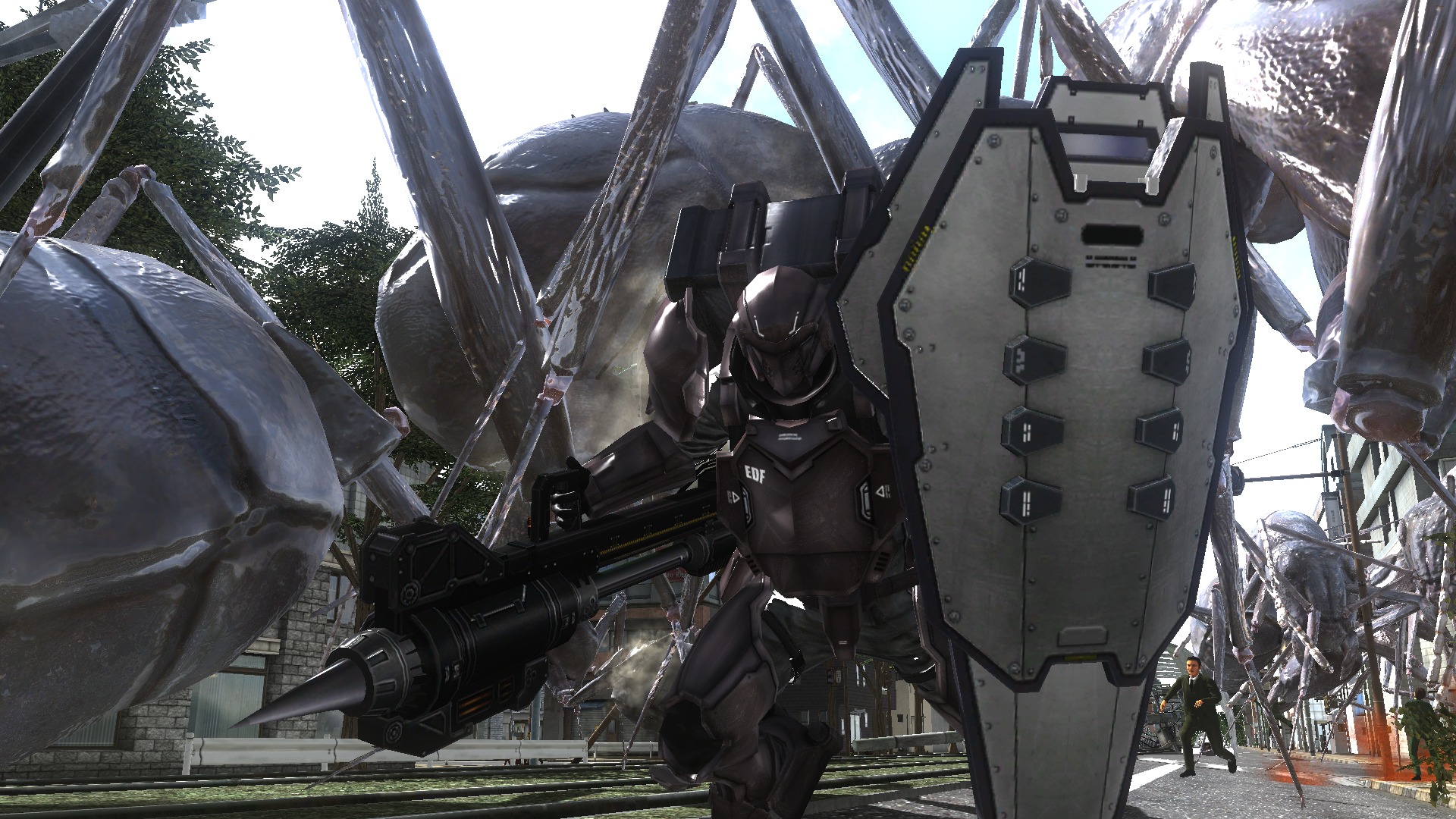 Even so, eventually there’s going to be an end, except even then EDF keeps on adding more.  Every level has five difficulty levels to choose from, and choosing Hard at the start is a great way to get torn to ribbons instantly.  Tackling the higher difficulties requires having earned a pile of strong weapons and gotten your armor count several times higher than its starting level.  The reward for survival is bigger, tougher guns that aren’t available on the easier difficulties, but earning them doesn’t come easy.  Hard isn’t kidding around, Hardest is best saved for later, and Inferno is pure madness.  For the first time in the EDF series, though, you can finally tackle Inferno online with up to three friends.

The Inferno difficulty was always designed around multiplayer, but split-screen and two player was the only way to go about it before.  EDF 4.1 finally adds online multiplayer, but it comes with two disclaimers.  First, the list of available levels isn’t what you’ve opened on the single-player game.  If you’re creating your own room rather than joining someone else’s, the available levels need to be unlocked by beating them again one by one.  Second, the problem with a pre-release review is finding anyone to play online with, so while I was able to get a sense of the level progression I simply can’t comment on the net code.  It’s a feature that should add an incredible amount of replayability to a game that’s never been short on that feature, but for the moment that’s speculation and has no bearing on the game’s score. 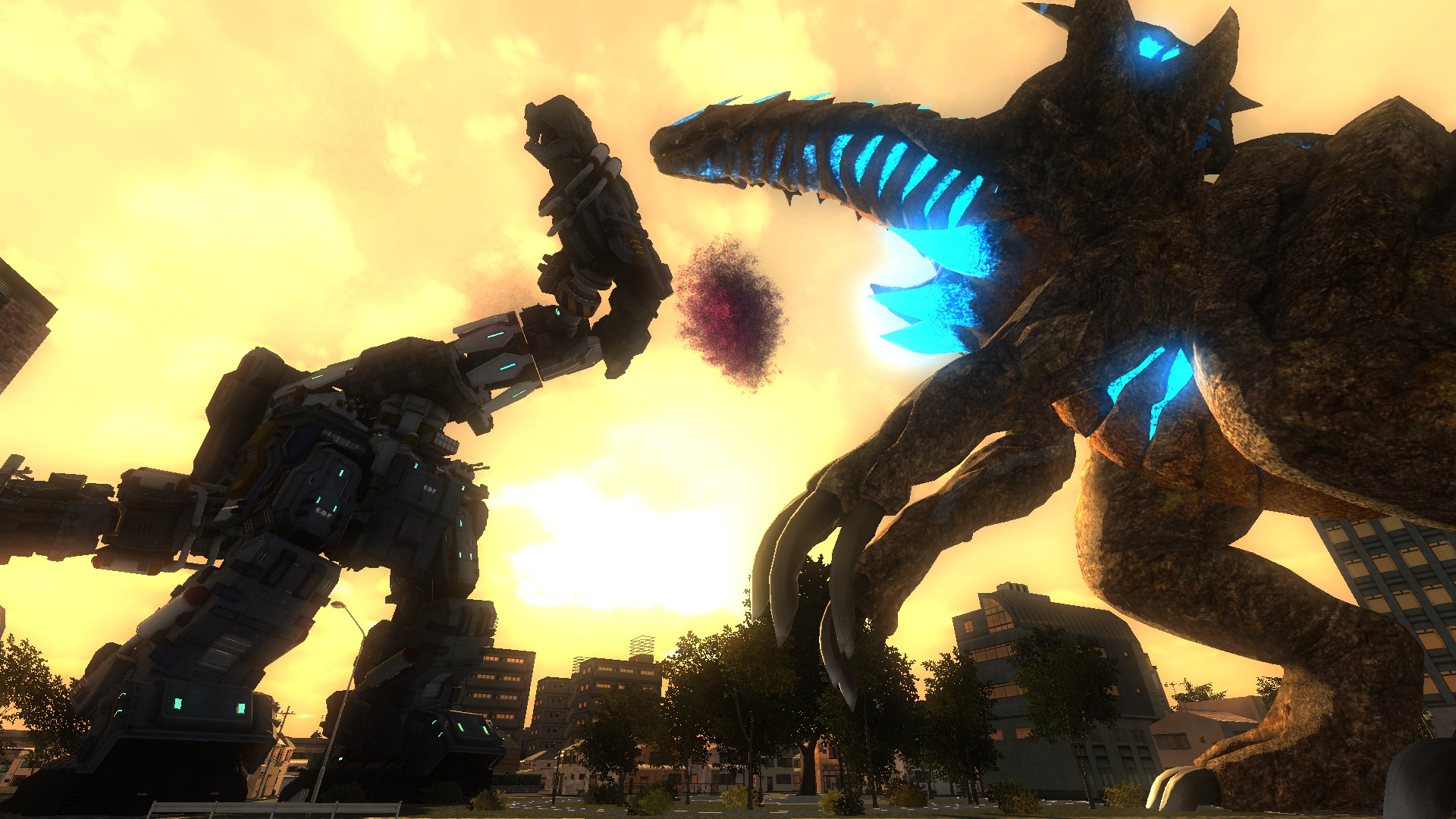 It would be easy to blow off Earth Defense Force 4.1: The Shadow of New Despair as just another HD remake, but that wouldn’t give it credit for how much better it plays now that it’s got appropriate processing muscle behind its enemy-packed levels.  Simply put, Earth Defense Force has never looked or played as good as this, and while the framerate still drops a bit when the action gets particularly intense, it’s never anything but playable.  Whether flying through the air as the Wing Diver, breaking out the heavy weaponry as the Lancer, dropping turrets as an Air Raider, or simply blasting everything that moves as the Ranger, everything is sharper, smoother and just plain more fun in this update.  The story is as ridiculous as it’s ever been, told like a radio play during comms chatter as the mission unfolds, providing the perfect audio backdrop as you level a city with each explosive encounter.  The action is huge, the enemies gigantic and the firepower overwhelming.  Earth Defense Force 4.1 is finally the game the series has always tried to be.