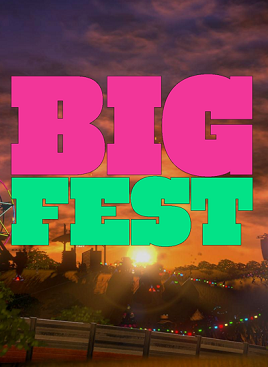 The phrase “sent out to die” tends to be overused by observers of the games industry. Typically, this simply indicates that the onlooker believes that a title did not receive the marketing push or release schedule that they believe it deserved. With developer On the Metal Ltd.’s BigFest, the correct usage of this colloquialism is quite apt. This was sneaked out to market quietly by Sony Computer Entertainment, in hopes that it will go unnoticed by the populace at large, perhaps to garner enough sales to mitigate some of the development costs. In this case, “sent out to die” isn’t quite strong enough. BigFest was taken to international waters, skinned with a potato peeler and then kicked overboard into a freshly chummed ocean. Afterwards, the purveyors evacuated to orbit for the purpose of nuking it from afar. It’s the only way to be sure.

Where this title landed on release is largely due to the original plans. Announced by Sony back in 2013, this was originally intended to be a free to play title. Taking the form of a “builder” game such as Jurassic Park Builder and The Simpsons: Tapped Out, the game was to center around running a music festival. Players would be tasked with adding amenities, such as concessions and sleeping tents, keeping the bands happy and expanding out to create the ultimate party. The true hook lay in the use of the Jamendo service for a fresh stream of new bands to feature and discover. This would allow the player to learn of a new favorite group via exploration and visiting their friend’s festivals. Honestly, the idea itself is sound (pun very much intended).

Fast forward about a year and a half after the original intended release date, we now have a product that hits the ideas originally outlined in the announcement, but is now a paid title. Fortunately, the switch to the up front ten dollar price point also means the removal of the micro-transactions that this title was obviously designed to support. Given the choice between a reasonably priced “pay up front” title and a free to play that tries to push the player to drop an ever increasing amount of money to make quicker progress, the correct decision was made. It’s simply that the game mechanics were not properly adjusted to close the holes the pricing structure change created. 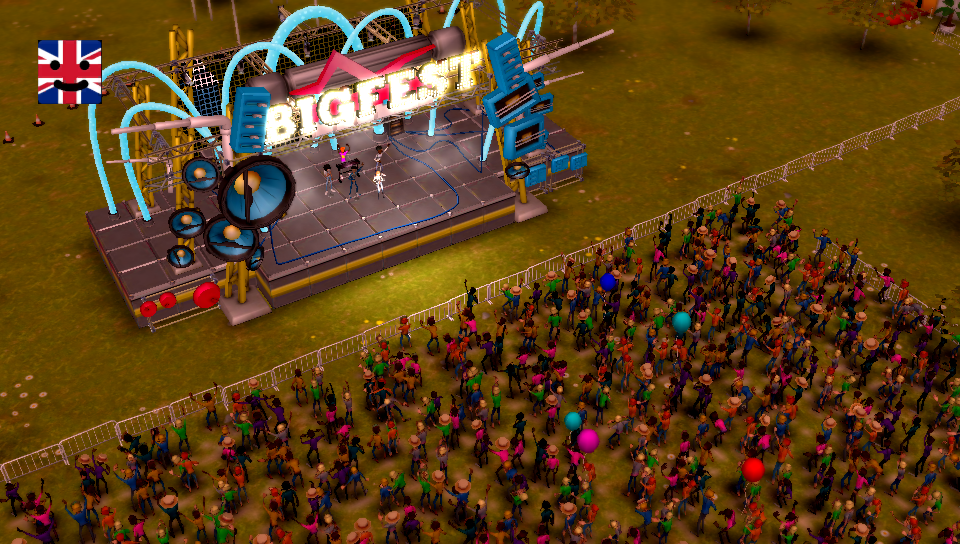 These types of builder games work off a basic cycle. First, build something. This usually takes some time. After that thing is built, it starts generating money. Once enough money has been collected, something new can be added or an upgrade can be made. This appears to have been the original design for BigFest. With the switch away from free to play, the long wait times for building have been removed, relying instead on the amount of roadies on staff available to work a project. If all of the roadies are busy, that new outhouse is going to have to wait.

While the timers are off, the money generation still moves at a F2P pace. Frankly, it takes f-o-r-e-v-e-r to gain enough funds to purchase the next needed upgrade. This renders playing the game a matter of waiting while the attendees kvetch and moan about something they need or want. The outhouse isn’t good enough? Well, then the sewer system needs to be upgraded to handle more state of the art port-o-johns. But that can’t be done until the stage is upgraded. The stage can’t be upgraded because the price is above the dollar amount that the security office can store. So, money needs to be sunk there. Wait. Then spend an obscene amount to upgrade the stage. Wait. And then upgrade the sewer system. Finally, the crapper can be built, but the attendees gave up and went home. Money generation, by the way, requires the player to be present. 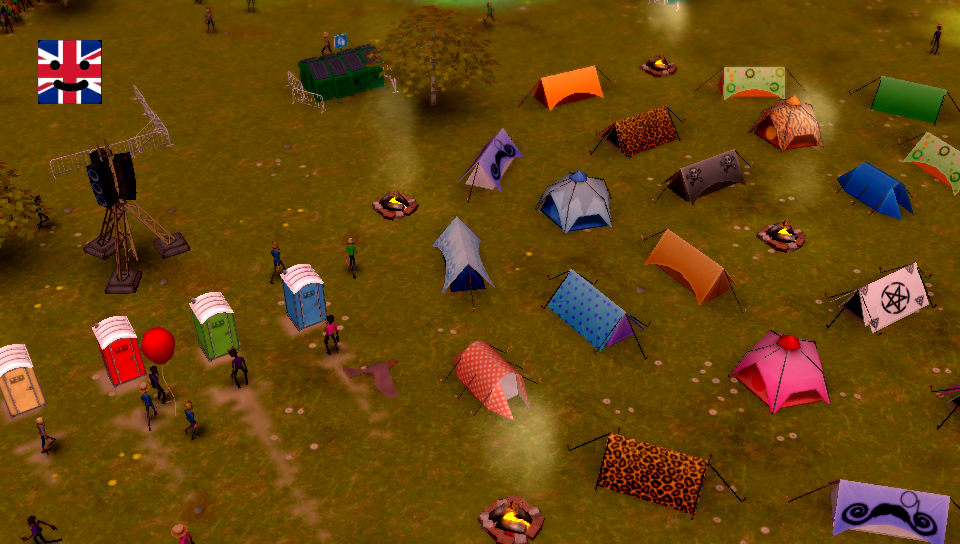 This isn’t to argue that there is nothing to do while waiting. It’s important to check on existing facilities to ensure that they are up on repairs. Repairing costs money, of course. The player should also scan the grounds to find undesirables, such as sick people, dirty hippies, park trashing hooligans, and streakers. It is easy to get behind a policy that says “shower or go home,” but this feels more like a time waster. Finally, the player can check and see what else is bothering the partiers. This can be the most frustrating part. “The line is too long to go to the bathroom” one might whine while standing five feet away from a well maintained restroom with no queue. “I want something hot to drink” another might complain while the only drink stands are for hot drinks; no more can be built. “There’s too much garbage here. We need more trash cans,” a third might intone with an (imagined) nasally wheeze as I barricade him in on all four sides with large groupings of bins.

The other wrinkle here is in band “management.” Basically, the player chooses a poster, which is a set of three challenges. When starting the poster, the headliner and supporting acts must be chosen. Using a band more often increases their popularity, which increases the crowd’s mood. Choosing an act that’s too popular can lead to issues with having to shell out cash to keep them happy, hunting the grounds to find lost items, and then listening to them complain if the crowd is too small. The popularity versus reward dynamic manages to be the most interesting idea here, though it is only a germ of one. During play, the length of songs actually acts as the timer to finish the challenges. If what needs to be done is easy, choosing shorter tracks will help zip things along. More money intensive tasks pair better with the longer songs. 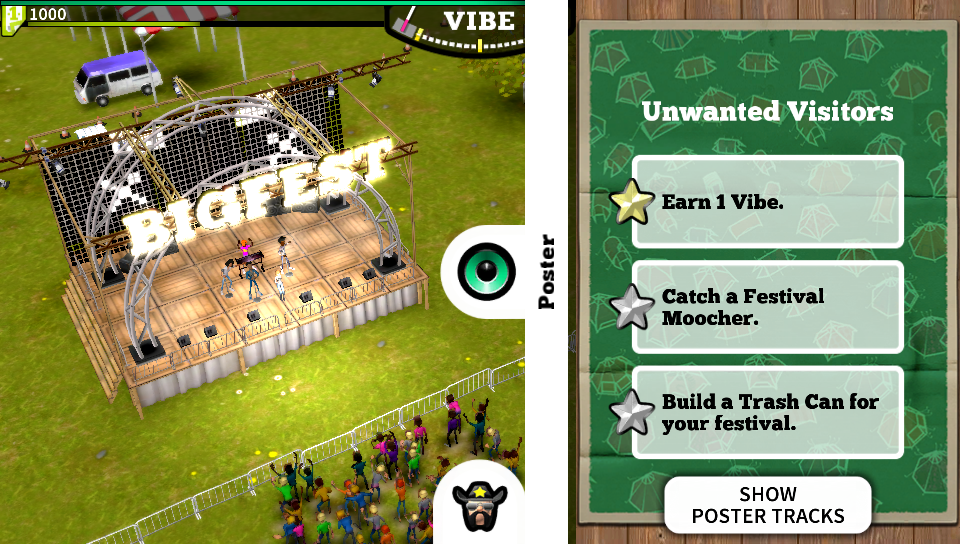 As music is such a subjective thing, discussing the merits of what is on hand can be futile. During play, though, only two tolerable tracks were found. More can be downloaded through the Jamendo service, but the offerings there are also pretty tiny and the download times are staggering. During play, this option was entirely abandoned due to this and the slap dash, clunky interface.

Finally, it is possible to visit other friend’s festivals, still. There, the player can collect statues to decorate their own festival and spend tokens to harass this other concert. While the decorations make sense, why a player would want to make things even more annoying is a question that does not seem to have a satisfactory answer. Seriously. Why? 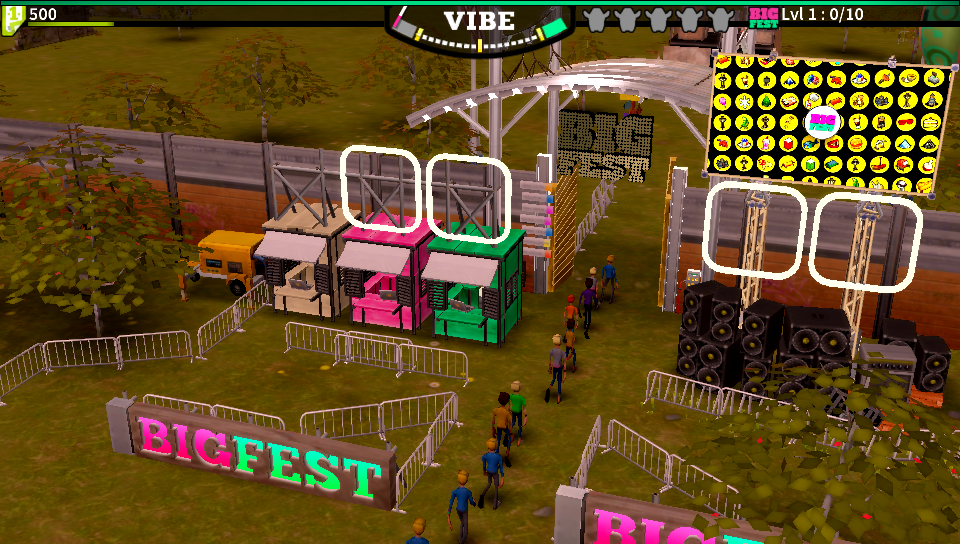 When viewing the vaporized remains of what Sony has pushed out to the public, one can just make out what could have been a great game. Since the heyday of Rollercoaster Tycoon and Theme Hospital, it’s not often that lite-management sims get a chance to strut their stuff. This was not originally meant to be that game, but it could have been with a change of the business model. Instead this is a title that is balanced for tedium. Some work to address these issues would elevate what is on hand here to the status of an amiable time waster, but it seems that the powers that be are done sinking time and money into this title. It is now, simply, a write off for Sony just as it should be a write off for the audience.