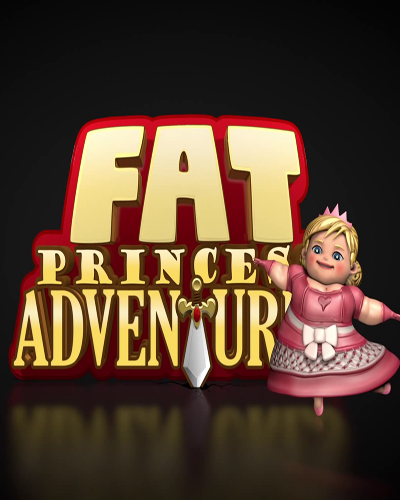 Utterly charming and fun to play alone or with others, Fat Princess Adventures replaces the strategic focus of the original Fat Princess with a move to the hack and slash, action RPG genre. Still full of wit and cheekiness — if less deep in its mechanics  — Adventures exudes irreverent fun.

The basic story arc is simple, which is that the player is tasked with rescuing the both the blue and red Princesses from the Bitter Queen. To accomplish this, there are four basic classes — Warrior, Engineer, Mage, and Archer — each of which can be leveled and developed throughout the game. Classes can be swapped, not quite at will, but at stations located liberally throughout the levels, usually before a significant enemy encounter. The class choice system is obviously designed with co-op play in mind and while lone-wolfing it through the game works well, it’s so much more fun to combine classes in a party of at least two players. The drop in-drop out multiplayer works well.

As in most hack-and-slash adventures, there are a multitude of treasure chests hidden in the land, and enemies drop loot, coins (which are needed for upgrading weapons), armor and cake. Eating cake restores health, at if health is full already, the cake temporarily turns the character into a super-chubby and nearly indestructible warrior. As in Fat Princess, it’s still politically incorrect and probably offensive to women with body image issues, but the game never takes this — or anything else — seriously. There are main missions that take the player through a number of large and visually distinct zones, and a number of short quests or side missions inside town hubs. These are usually fetch quests or passing notes or some other very self-aware and “gamey’ type activities and they earn coin rewards. Though they’re usually easy to complete and well marked on the map, some of the side are a little tedious, like combing through an entire town looking for some errant chickens. 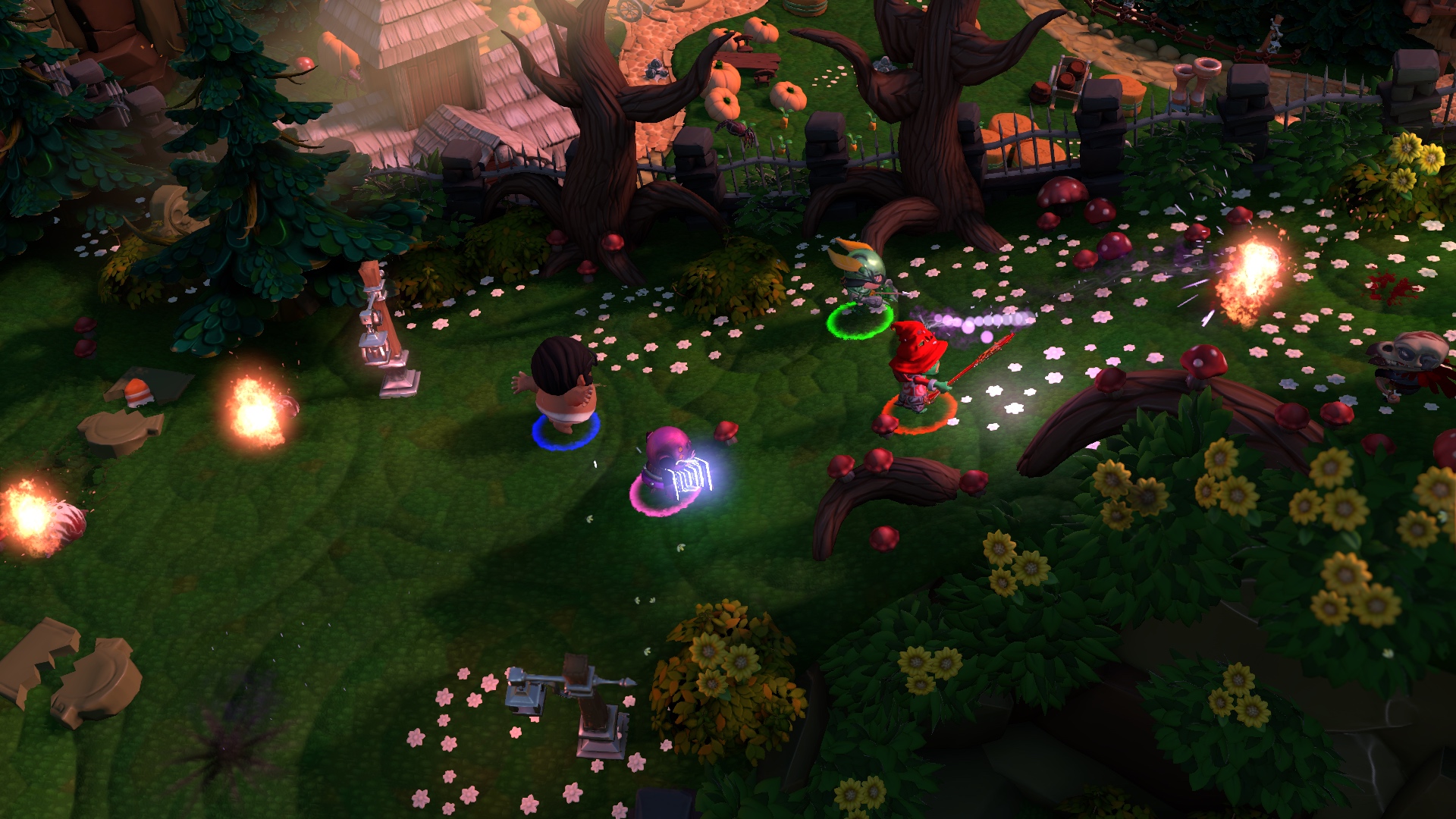 Moving through the world is easy and fun, and although combat isn’t at all deep — there are only two moves — the targeting system works well and there are a lot of environmental elements like land mines and bombs to toss into the fights. The mobs are varied and single-player combat can become pretty difficult when facing a large group of enemies with melee, magic, and ranged skills all attacking at once. In addition to eating cake to power up, the player has a special “awesome sauce” ability on a cool down timer. Overall, combat and exploration are great, but the boss battles are not, especially without co-op partners. They are characterized by a lot of adds during the fights and the basic strategy usually involves staying far away until the awesome sauce ability kicks in. Death is relatively meaningless, taking the player back to a checkpoint without enemies respawning.

The story won’t win any awards for originality, but the presentation of it is incredibly appealing. Moving from the animated cartoon style of Fat Princess, Adventures moves to a fully 3d, miniature world that looks like a super-detailed table top construction, with textures that suggest fabric or paper. Its bright, colorful, and slightly tilt-shifted visuals perfectly match the tone of the game and size of its ambition. Little details are everywhere and the miniature fire and spell effects are kind of amazing.

Equally impressive is the voice acting and overall wit of the narration, script and dialogue. Heavily reliant on bad puns, double entendres (“I told you to pluck the pheasants”), anachronisms (“I should probably go blog about this battle”), and just an overall gentle sense of humor and fun, the only negative is that the jokes are repeated too often and can become repetitious. The voice acting is top-drawer and features a cast of stellar actors, much, much better than one might expect from a relatively low-budget game. Equally good is the game’s score. 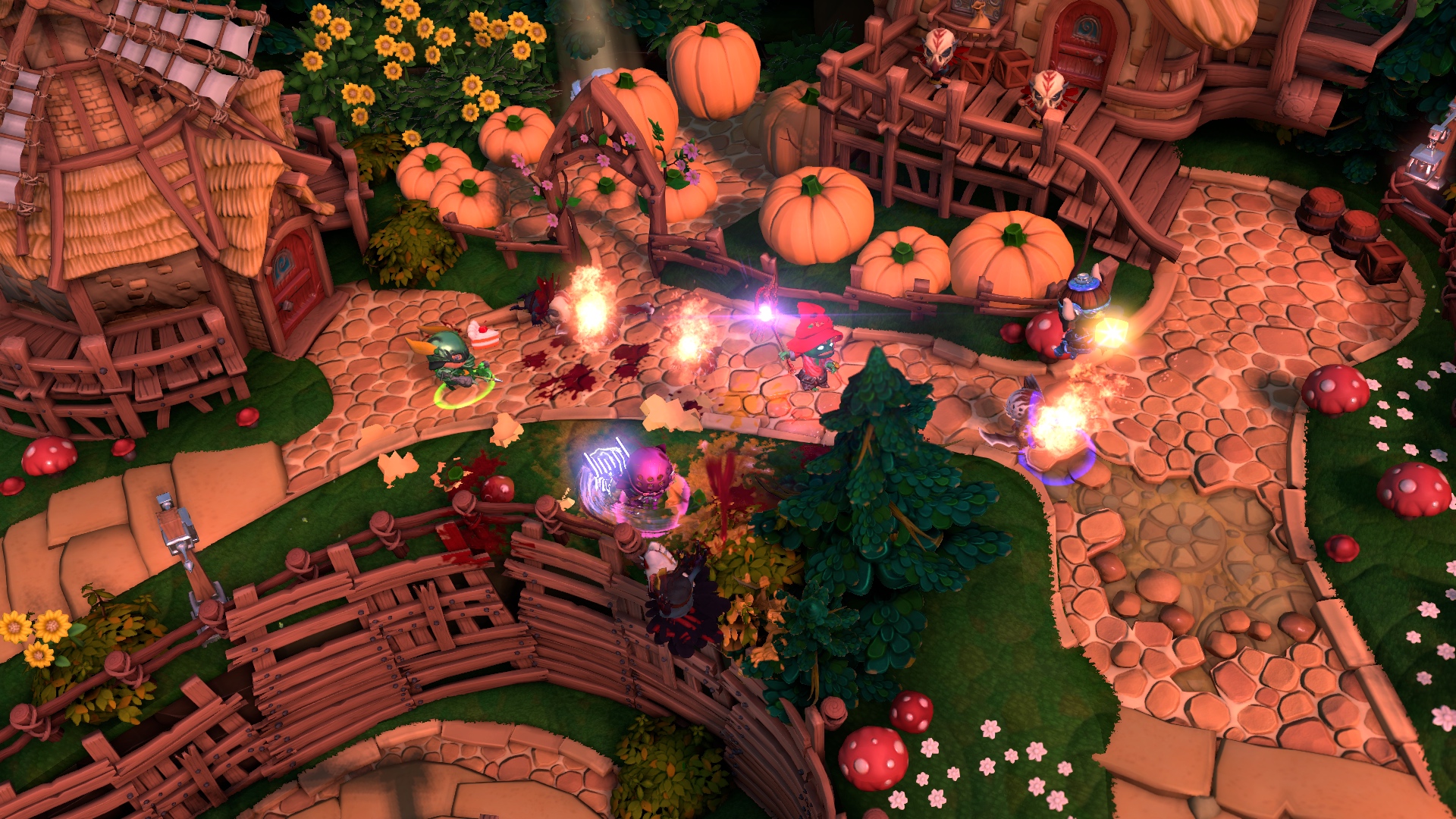 Fat Princess was subversive, politically incorrect and unexpectedly complex in its strategy and depth. Fat Princess Adventures trades a little of that depth for a more straightforward, action RPG-focused design. The top-notch voice cast and obviously talented writers are underutilized by the trite main story, but moment-to-moment deliver wit and charm in their performances. The art direction and visuals are kind of wonderful, and the action and gameplay — especially in co-op — is simple but fun and rewarding, at least in the short term.