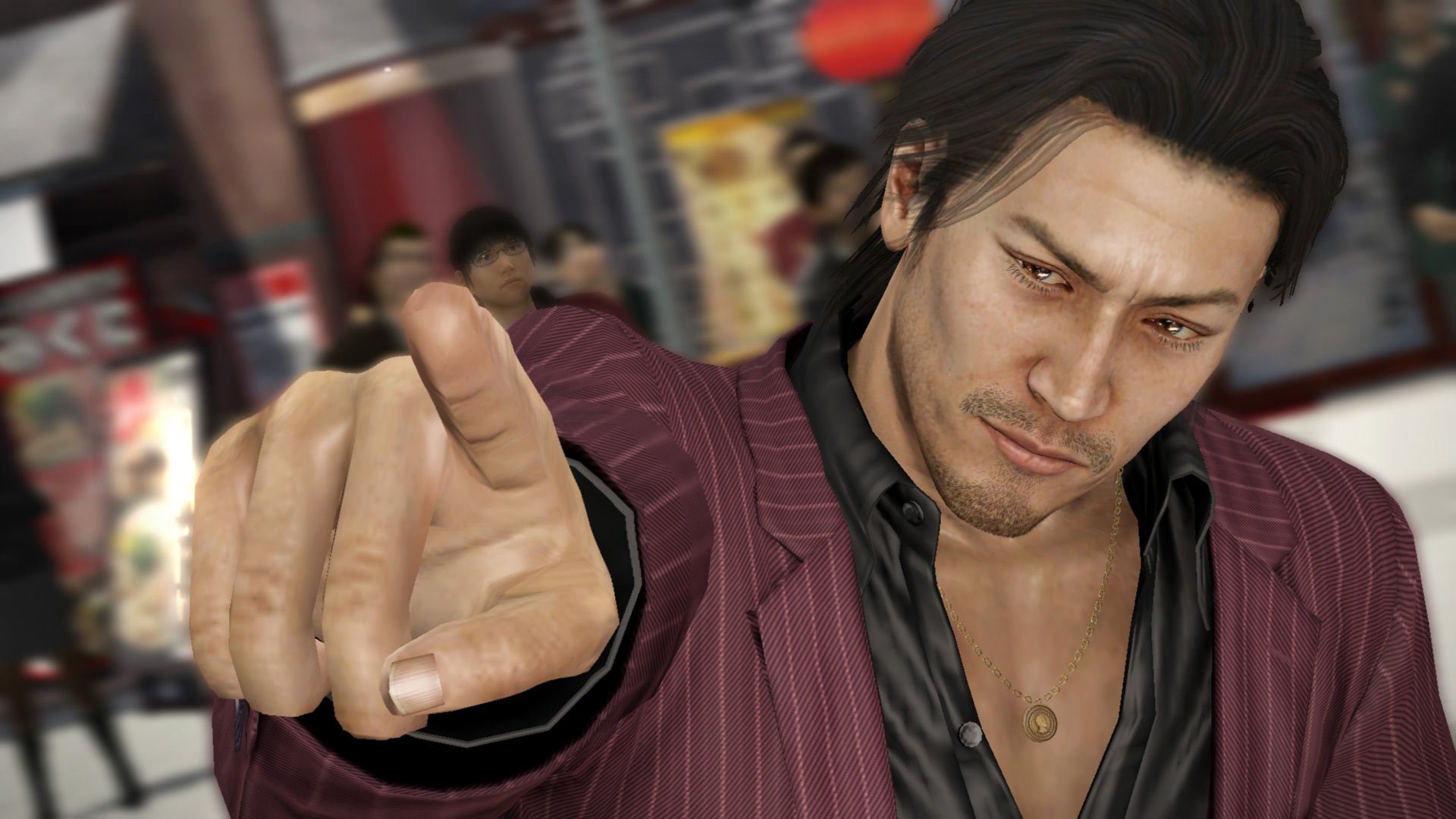 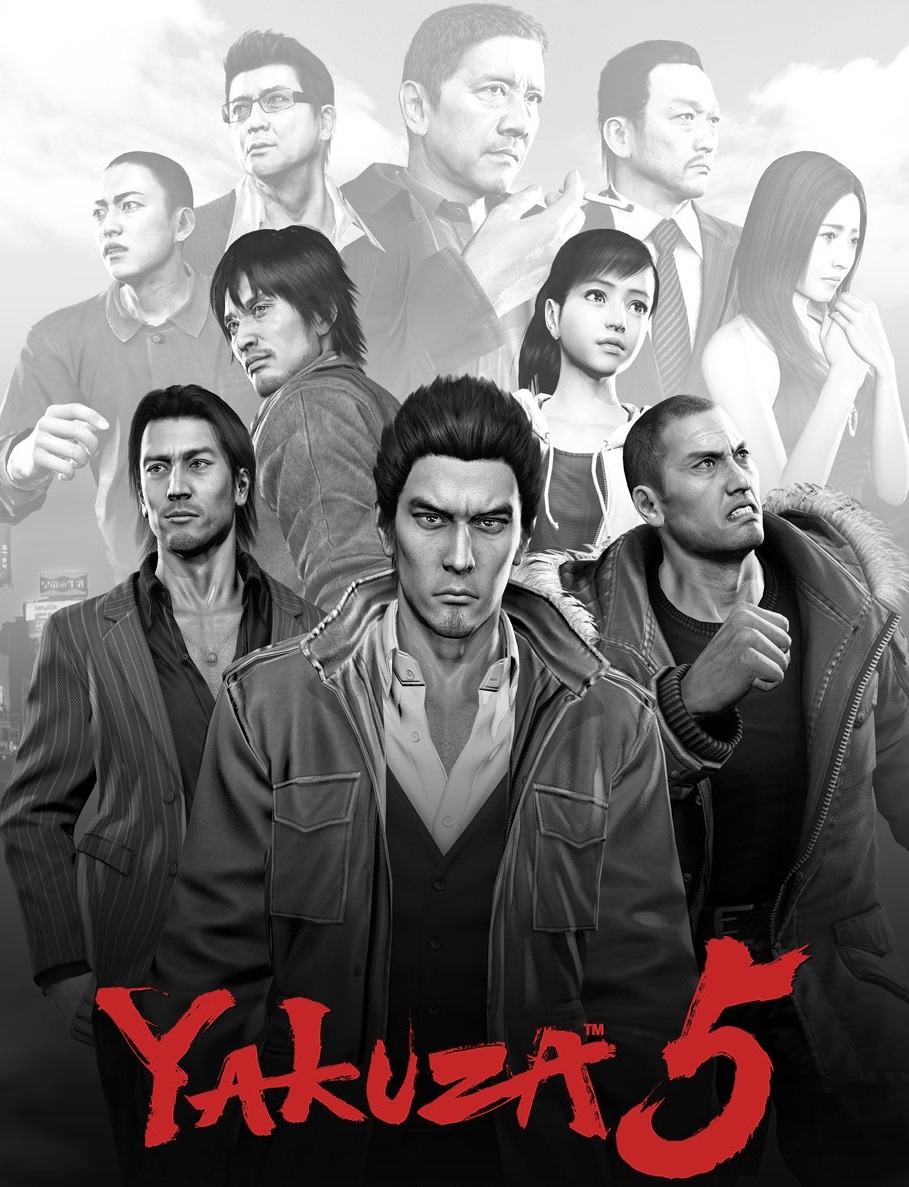 Yakuza 5‘s western release has been a long time coming. After its 2012 launch in Japan, Sega’s stark silence about whether or not the game would be localized left most fans of the series assuming they’d never get to see what had been heralded as Yakuza’s best game. But then Sony “built the list” and saw the overwhelming response for Yakuza 5‘s English localization. Taking the project under their wing, we were finally told that the franchise’s fifth installment would indeed be coming to the West. And now, here we are, almost three years exactly since it’s Japanese release, with Yakuza 5 in full English glory.

Yakuza 5, like all of its predecessors, is a huge open-world crime epic that deals as much in story as it does gameplay and content. The story here is easily the series’ best, picking up after the events of 4 and delving deeper into the life of Kiryu Kazuma and his ragtag group of unsuspecting do-gooders. After five entries in the now-venerable franchise, it would be easy for Kazuma’s (mis)adventures to become stale or simply retreading of old territory due to running out of new story hooks. Yakuza 5 never once falls into either one of these categories, though, instead pushing forth the most character-centric, narratively interesting tale to date. Yakuza’s cast has always been varied, from the hardened criminal types hellbent on taking down rival clans, to the zany, over-the-top ones; it’s truly a series that has a little something for everyone. Better still is the fact that interactions play out in diverse ways because characters are so different from one another and there’s never an instance of mixing up characters in one’s head.

That being said, Yakuza 5‘s story is indeed a continuation of the previous games, and as such, those entering the fray for the first time are going to be undoubtedly confused, or at least unable to get the most out of the emotionally-resonate tale merely for not having been with the characters over the span of hundreds of hours that each game had to offer. That shouldn’t necessarily scare off anyone looking to check out what all the hype is about, because while the game is heavily embedded in its lore at this point, the story can be enjoyed without past events, though to a markedly diminished degree, and the core gameplay is so good that it is enough to get folks through what will be some head-scratching moments as they try to figure out the various names, clans, locations and previous events that have been introduced over the course of four previous titles. 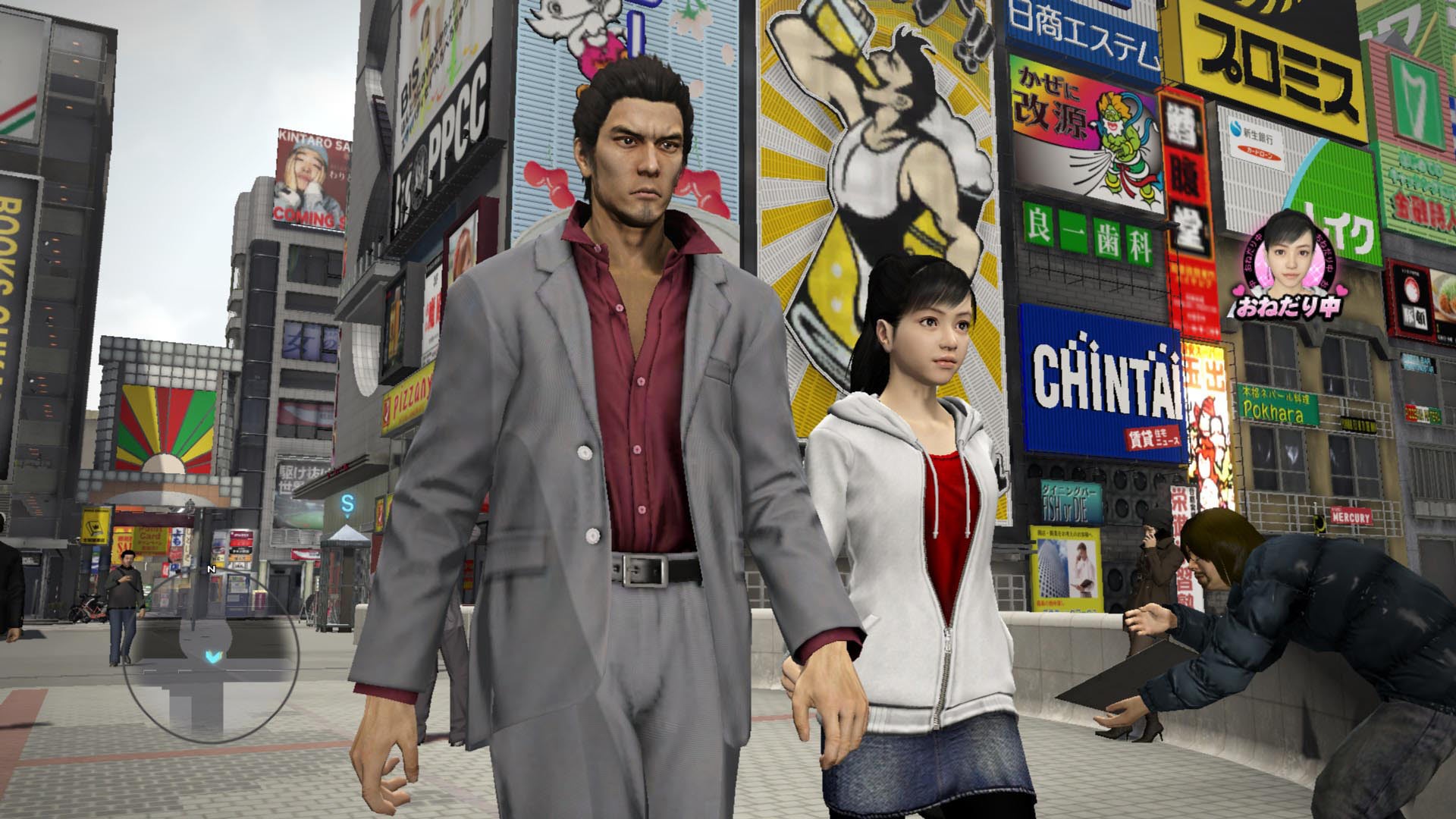 Even still, Yakuza 5‘s narrative is its most complete one to date, and moreover, its most poignant. On the surface there’s a fantastic and adult story about organized crime, complete with all the dramatic trimmings one would expect from films like Internal Affairs and Goodfellas, but underneath that mobster veneer are themes of love, honor, friendship and betrayal. Yakuza has always been a game that is telling multiple stories, those superficial and those deeper, but Yakuza 5 takes this to a new level. As a result, we found ourselves more invested in its cast than ever before. Perhaps that’s because the game has been able to lay the narrative foundation over the course of the aforementioned quartet of titles, or perhaps it’s a testament to the quality scriptwriting in this particular entry and the subsequent stellar localization efforts that drew us into its gritty yet relatable world.

With this in mind, though, do note that Yakuza 5 takes a while to get going. In the first three hours, there will be long stretches of dialogue that won’t do much else than introduce players to the city of Fukuoka and our leading man Kazuma. The “true” tale doesn’t get off the ground until around four hours in. In other words, it’s a slow burn at first. So much time is spent detailing small things that are — in the grand scheme of things — extraneous to the central plot and only there to flesh out the world and give the most ardent fans a more immersive experience. Once things get going, however, there’s a wonderful story to see that feels extremely layered and dynamic thanks to the five playable characters. 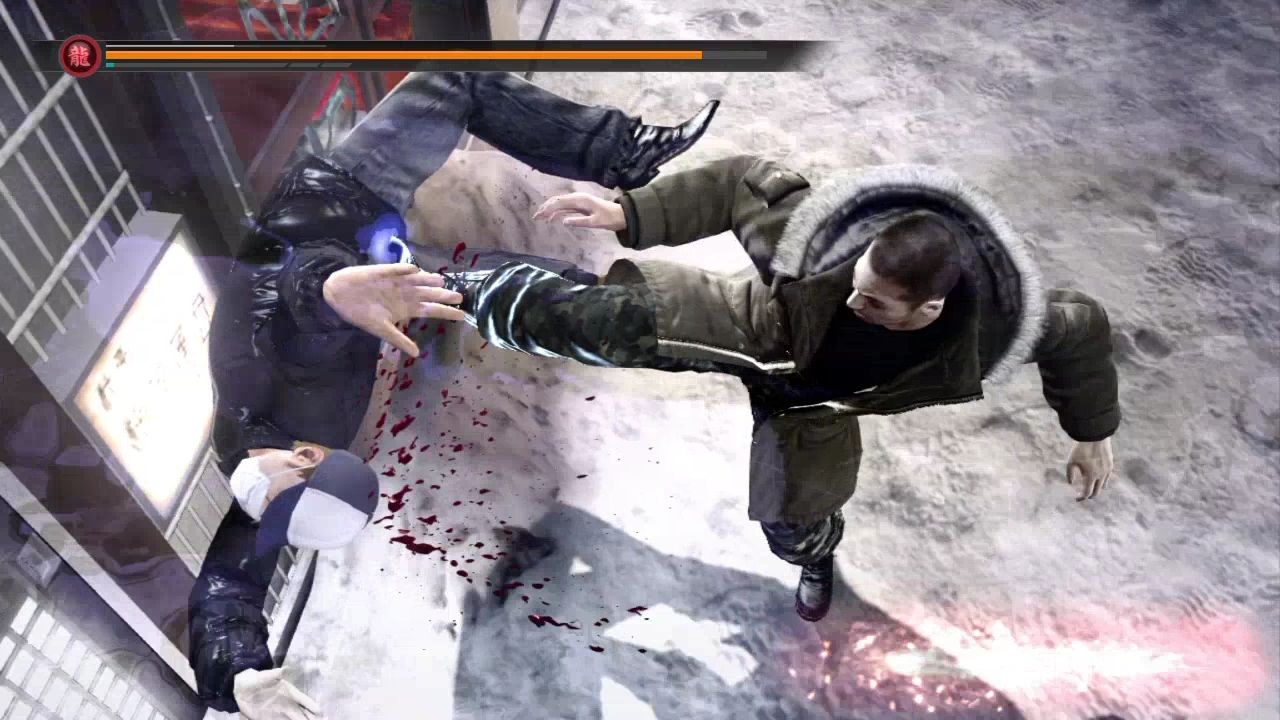 The core tenants of its gameplay, however, come in the form of freely roaming cityscapes, following directional markers to the next story mission, inevitably getting side-tracked by a side quest and then beating up dudes. Yakuza 5 hasn’t changed the formula much from those before it, but has instead refined it. The combat is still the same arcade beat-em-up goodness that we’ve come to know and love, just with more moves, actions, animations and weapons. And of course, there are the RPG systems for customizing and leveling up characters’ movesets and attributes, providing even more depth to the battling.

This is where Sega is masterful in blending old with new; the open-world nature of Yakuza is obviously very current-day gaming. If we know anything about Sega, however, it’s that they excel when delivering on their old-school design philosophies that they perfected in the ’80s and ’90s. So while it’s easy to see a 2015 game here when wandering the city and doing anything one’s heart desires, it’s also easy to see the Streets of Rage and Spikeout influences when it seamlessly transitions to a combat encounter right there on the street corner of downtown Tokyo and fisticuffs and suplexes are exchanged as if it’s just another day at the office. So this merging of old and new — nuanced and arcadey — is what gives Yakuza its beloved identity. 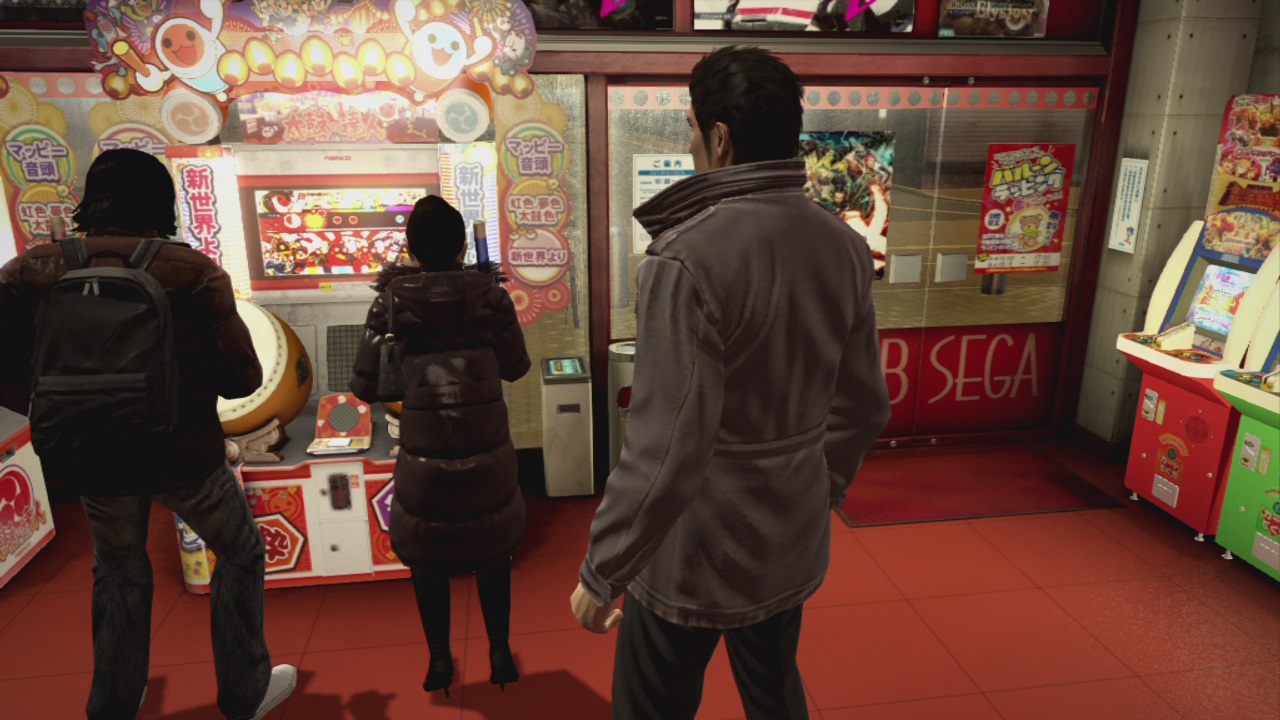 From a pure mechanics and control standpoint, Yakuza 5 is rock solid. The combat is as bone-crunching, wince-inducing and bombastic as ever — and a smidge faster this time around — but the inclusion of other features like being able to drive a car and zip around in a taxi, participate in rhythm-based dance battles, bowl, play darts, shoot pool, pick up trash off the streets, hunt bears, manage a pop idol and her career, partake in chicken races and various other awesome and absurd mini-games don’t feel like mini-games at all thanks to how fleshed out they are. There are even various vintage Sega games that can be played in their complete form in the city’s local arcade parlor (I played far more Virtua Fighter 2 than I should have for this review, but that’s neither here nor there). This all ultimately culminates in the most complete game in the franchise, hands down, but also one of the most robust games for the PS3.

Speaking of new additions, Yakuza 5 is built off a brand new graphics engine, scrapping the Yakuza 3 engine that had been used for Y4 and Dead Souls. Consequently, it’s far more vibrant and lush than in past titles. The five settings in which the game takes place are modeled down to the smallest of details, all of which look beautiful, distinct and life-like in their representation of Japan. Even for being a game that originally came out in 2012, Yakuza 5  pushes the PS3’s limitations. With as big as each area is, and with as much that’s going on at any one time on the screen — whether it be a large gathering in the city’s center, a crowded side-street, or an open vista tucked away in the corner of the city — Yakuza 5 is a gorgeous game that painfully recreates its source setting with meticulous precision. 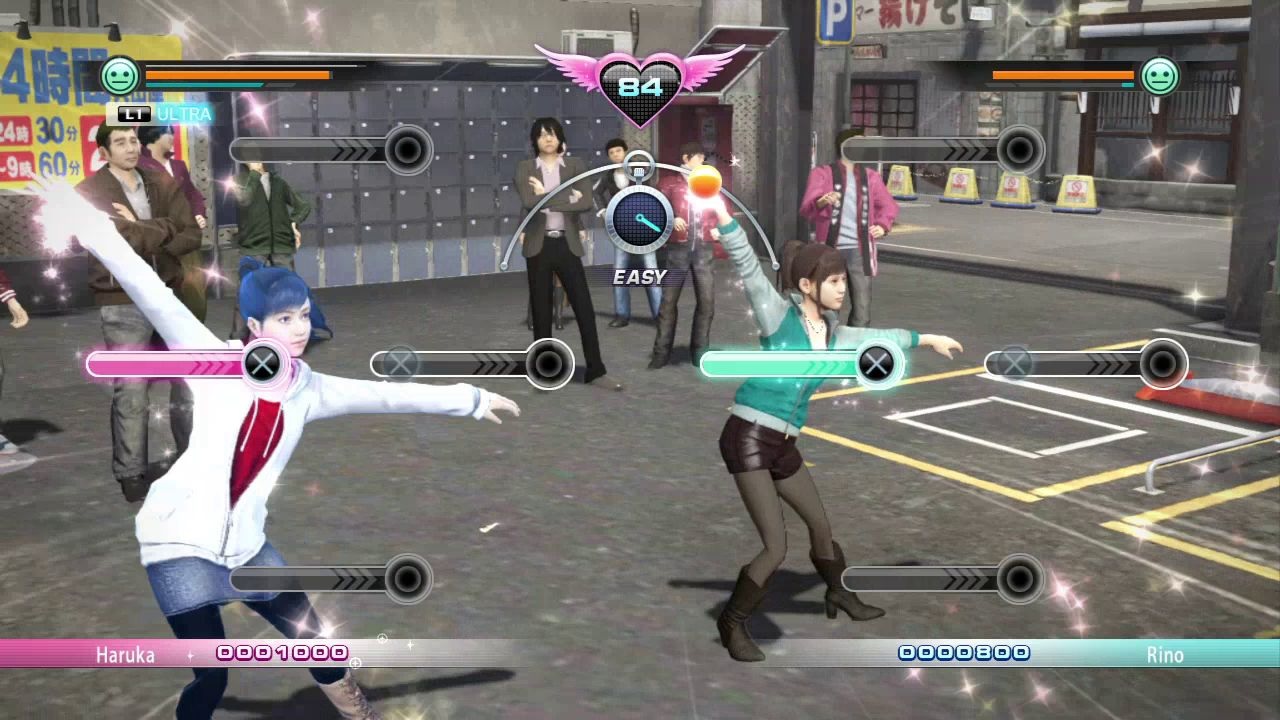 Animations also look smooth, which is seen mostly in combat, where haymakers hit hard, smashing a guy’s head into a wall makes you instinctively grab your own head out of nearly feeling the crunch of his skull meet concrete, or the wallop of a traffic cone over the back of some meaty bouncer-type, Yakuza 5 just moves with great fluidity. There are a few instances of stiff animations here and there, and we saw one or two slowdowns when a huge brawl unfolded right in the busiest section of the city, but on the whole it uses its hardware specifications well and runs like a champ.

Fortunately, it sounds just as good as it looks, too. Purists will rejoice knowing that not a single line has been dubbed, meaning all voiced audio here is in Japanese with English subtitles. This helps bring the game to life as it was weird in the first game hearing these obviously Japanese characters speaking English — it just detracted from the authenticity the game strived so hard to ascertain (especially because the voice acting was horrid). The soundtrack follows suit and provides us with an eclectic mix of rock ballads that wail during fight encounters and soft piano compositions that accentuate the more intimate, touching moments, with plenty of J-pop in-between the two ends of the musical spectrum. Better still is the use of sound effects, be it that of idle chatter when walking down a crowded street, the crunch of bone-on-bone combat, or the chirping of birds, Yakuza 5 knows how to tell a story with nothing but a few ambient sounds. 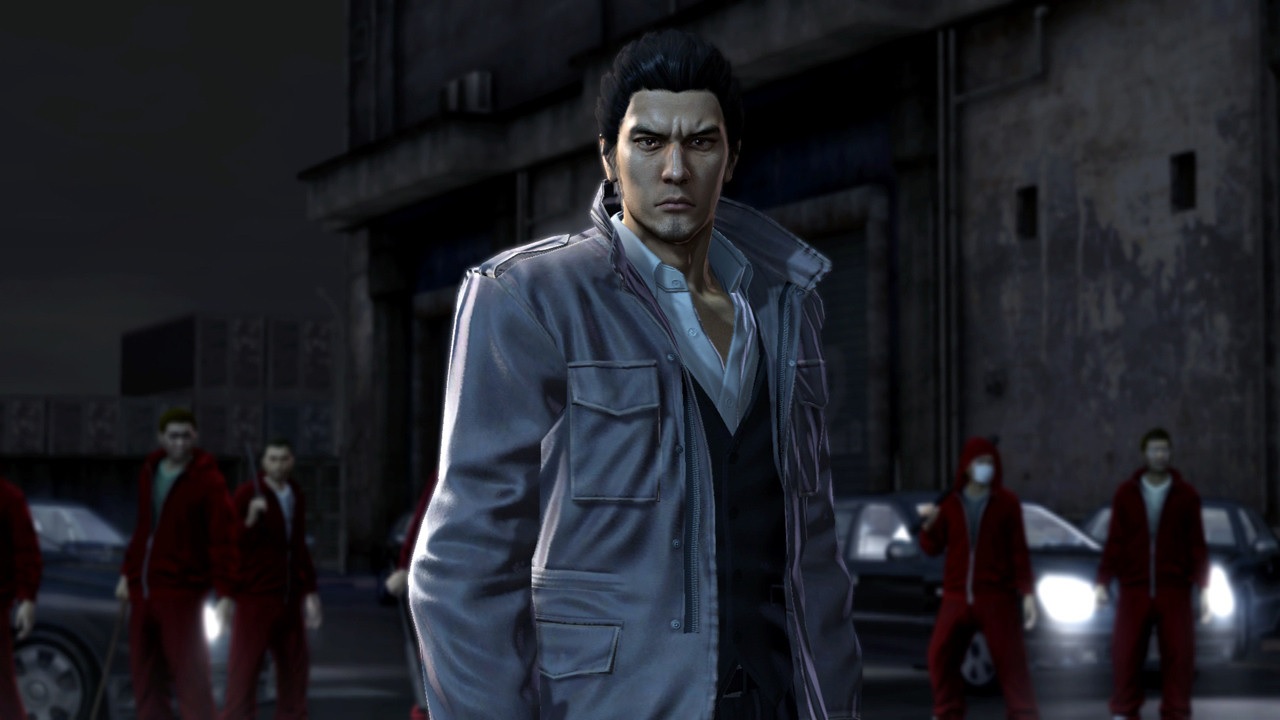 It may have taken a number of years to get here, but Yakuza 5 was worth the wait. It’s not only the most robust and well-executed game in the series, it’s also one of the best games of last generation. It’s the perfect swansong for the PS3 and should be played by anyone with even a passing interest in open-world, action, fighting, role-playing, story-driven games or, well, just games in general. It effectively transcends its genre and can truly be enjoyed by people who don’t usually get into such non-linear experiences thanks to the wonderful implementation of a host of systems that are all fully-realized and compelling. There’s so much to do here that Yakuza 5 could easily last into the hundreds of hours range and wouldn’t drag its feet for a single minute of it. This is how Japanese gaming rose to prominence and stayed at the top for so long. If you’ve written it off in recent years, then this is a reason to come back, because Yakuza 5 is the pinnacle of eastern games development, bar none. It’s even more than that, though, as this could stand toe-to-toe with the best out there, be it western- or eastern-developed. Just do yourself a favor and buy this game.