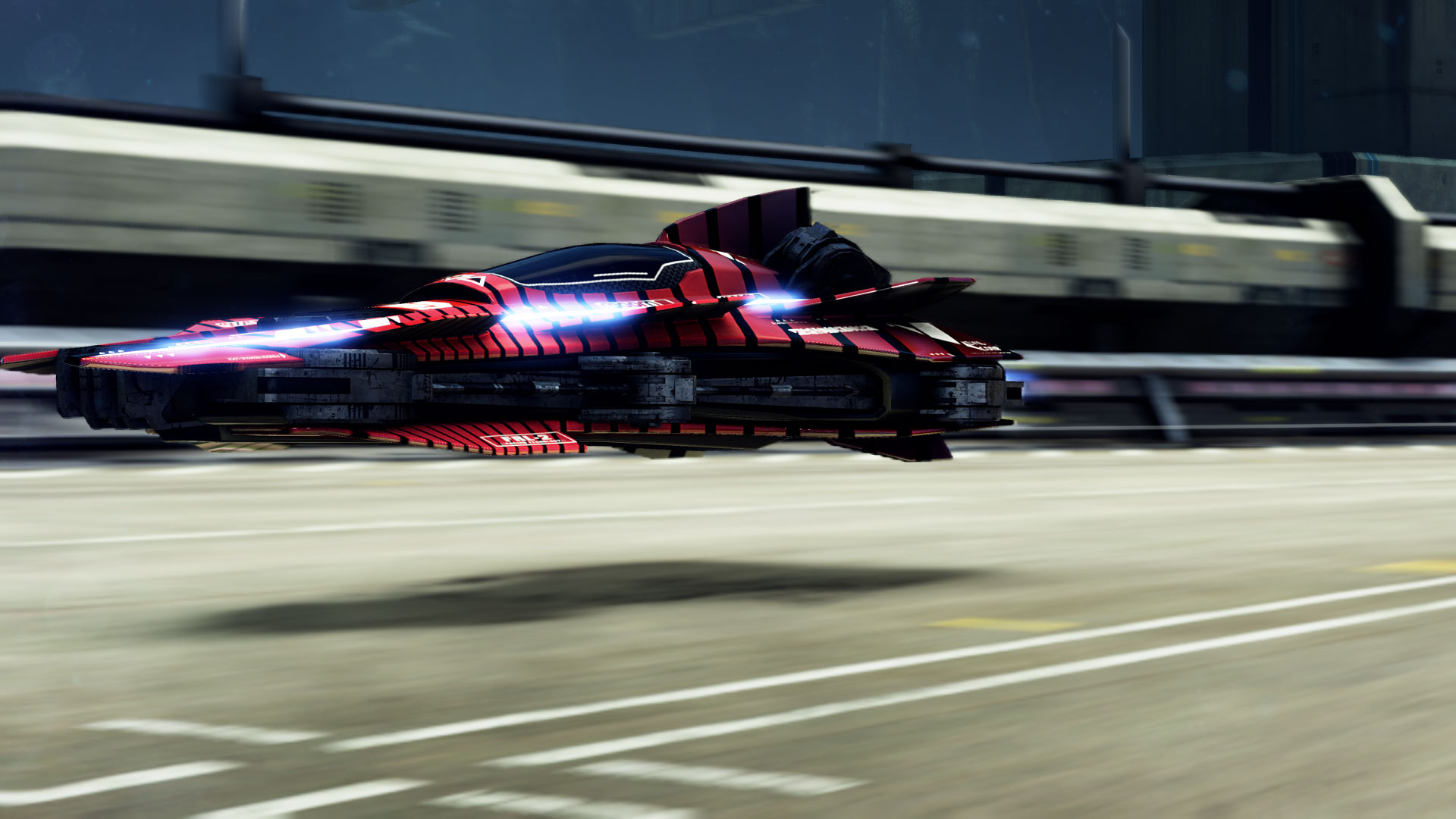 As brilliant as Nintendo’s creations are, the Japanese company doesn’t have the best track record with caring for some its more obscure franchises. Though Metroid is finally stepping out of the shadows next year (albeit with a far from traditional entry), the F-Zero franchise has been ignored since the release of F-Zero GX on GameCube over twelve years ago. Luckily, German developer Shin’en has come to the rescue with FAST Racing NEO, a beautiful, technically immaculate futuristic racer that shares many of F-Zero’s sensibilities, while making some astute additions to the formula.

From the start, FAST Racing NEO doesn’t pull any punches. It demands precision from its players from the word “go” and even small mistakes can be fatal. This can feel frustrating at first, especially as there isn’t any tutorial mode or practice course provided, but the thrill of victory is so satisfying that, even if it takes some time to achieve, you’ll likely be hooked. Cups in FAST Racing NEO only take about ten minutes to complete, so even if you don’t end up on the podium, it doesn’t feel like any effort was wasted. This is essential, because a simple mistake in the last lap of your final race could see your ranking drop from first to fifth. That challenge may sound daunting, and it can be, but by committing to delivering a difficult but fair racing experience, FAST Racing NEO succeeds in catering to players who revel in challenging, precise gameplay.

With fewer racers competing at once than the similarly staged F-Zero GX (10 as opposed to 30), FAST Racing NEO feels much less aggressive than Nintendo’s forgotten series. That, along with the lack of a shield meter on your vehicle, allows one to focus their attention on pure, elegant driving. There are still occasionally moments that require some strategic jostling, but for the most part FAST Racing NEO places much more emphasis on technical skill, and feels more manageable as a result. There are three difficulty levels, each toting more speed than the last. There’s a noticeable difference in the pace of the racing and aggression of the other drivers as you move up through the leagues, but it isn’t until you conquer the expert level, Hypersonic League, that you can try your hands at FAST Racing NEO‘s Hero Mode, which is pure insanity. 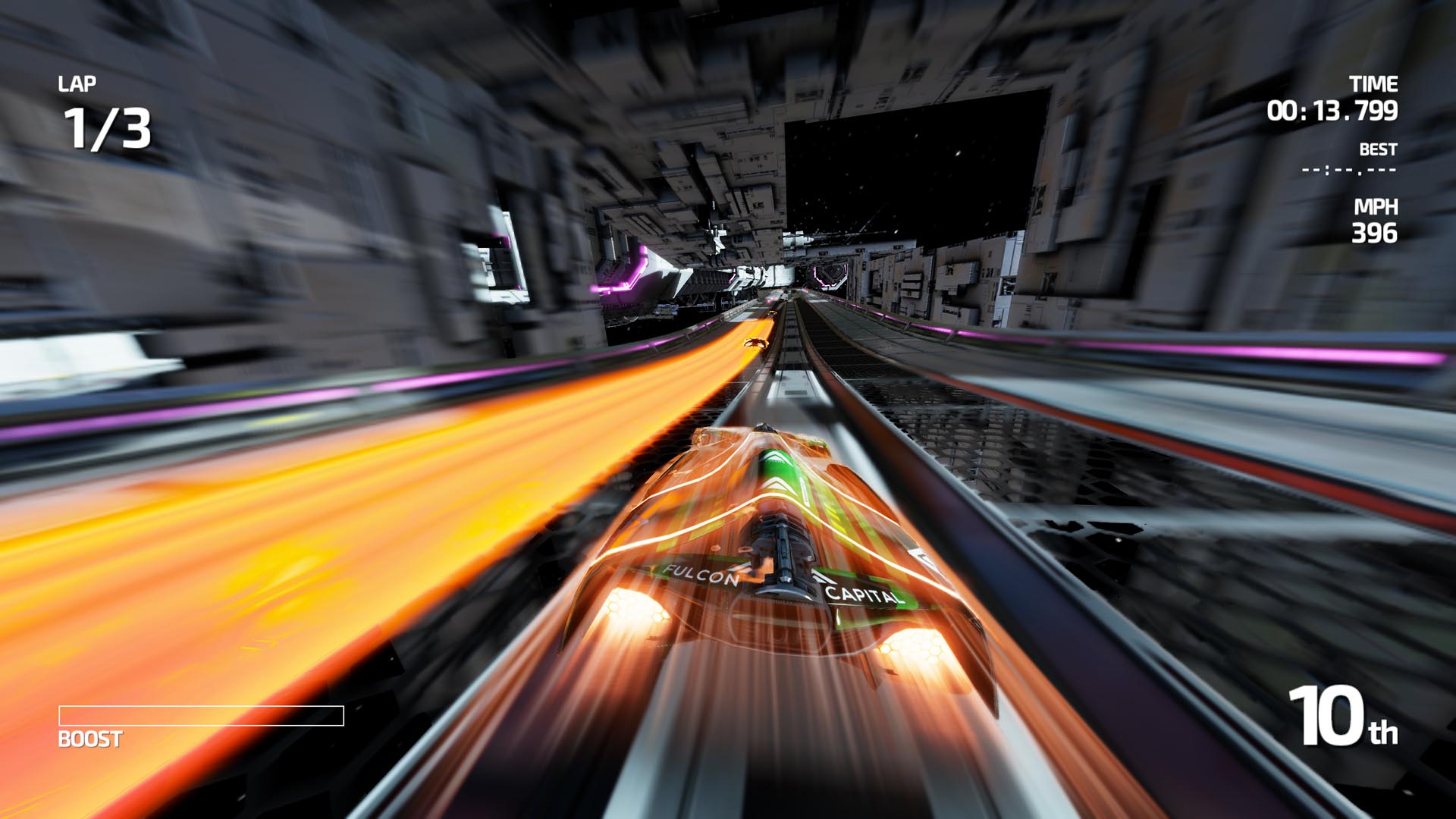 One race in Hero Mode makes the rest of FAST Racing NEO feel unbelievably generous. In it, you play at Hypersonic League speed, your boost meter doubles as a shield meter, each course is mirrored and you must finish first (if you can finish at all). It’s the ultimate FAST Racing NEO challenge, but it’s unfortunate Shin’en didn’t allow players to choose the speed they play it at, or provide the option to incorporate some of the mode’s bespoke features — specifically the vehicle shield and mirrored tracks — into the core game. It would have made FAST Racing NEO even more replayable than it already is, but reserving Hero Mode for the game’s most elite players still provides the best racers with a nearly insurmountable challenge that will keep you busy for a long while.

As the title implies, FAST Racing NEO’s gameplay is blistering. Races begin with a burst of speed and only become more intense as they continue, and that sense of tension and epic competition is greatly enhanced by the game’s pulsating electronic soundtrack. By collecting the boost orbs strewn throughout each circuit, players can deploy short, jolting bursts of speed that stretch the games visuals like a ship entering hyperspeed. Most importantly, the controls are tightened to perfection, responsive to the tiniest of adjustments and the most drastic strafing.

The sixteen tracks are all impeccably designed, each boasting unique obstacles like gigantic robot spiders or fire geysers, twisting and turning through gorgeous, futuristic environments that tote a wonderful luster at even the highest of speeds. Many courses contain heart-stopping gliding sequences that have you strafing onto distant stretches of road or around enormous asteroids, demanding different techniques than the usual winding racing. FAST Racing NEO’s visuals are impressive, easily some of the most polished on Nintendo’s infamously “underpowered” console, a feat all the more notable coming from a small indie team. 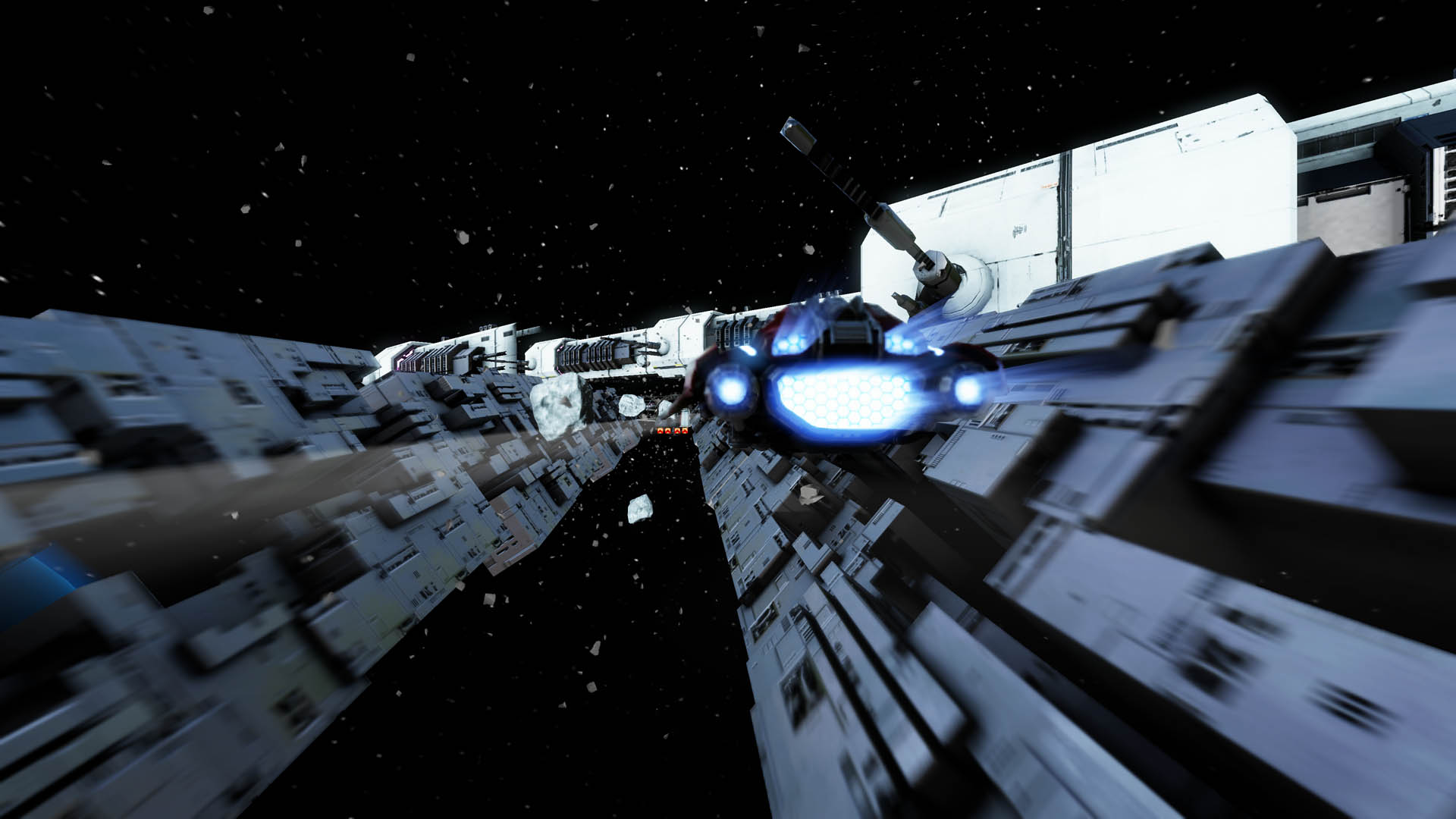 Shin’en’s racer takes obvious inspiration from F-Zero, but its most engaging mechanic is wholly original. Boost pads are placed throughout each circuit, colored either orange or blue. The color of your car’s energy core can switch between the two colors at the press of a button and matching it with the strip of road you’re driving over yields an invaluable boost that can often be the difference between victory and obscurity. Should you drive onto a boost pad but wield the wrong core color, however, your speed will quickly be sapped until you switch to the correct hue. It’s an ingenious mechanic that adds an extra factor to the strategy of each race, but Shin’en doesn’t make those boosts easy to acquire. Often they’re laid out in quick succession, forcing players to time their core color changes perfectly or risk losing the speed they worked so hard to accrue.

Each of FAST Racing NEO’s ten vehicles is distinct, both in performance and in appearance, and altogether the roster offers more than enough selection to cater to each driver’s preferences. Even so, I would have very much enjoyed some sort of customization, even if only cosmetic. Collecting parts and building my own ship was one of my favorite elements of F-Zero GX, and I missed that agency in FAST Racing NEO. Nevertheless, the vehicles all boast awesome designs, epitomizing the stylish design ethos. 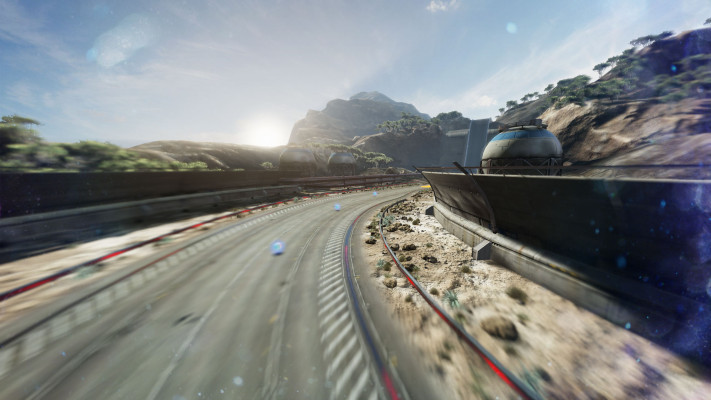 Shin’en makes efforts to represent different part of the world in its cars and track designs, but it neglects to ever really elaborate on the game’s futuristic setting. I was fascinated by the cities in ruins, the enormous ships flying in the background and the strange creatures that pop up over the course of the game’s sixteen tracks, but I was left wanting more information than Shin’en thought to provide. In a way, that’s almost ideal; it lets players make up their own stories behind the game’s futuristic world, and doesn’t distract from the impeccable racing at the game’s core. FAST Racing NEO would have benefited from some sort of lore or characters to flesh out its world, however, no matter how shallow, because it lacks a tangible personality as it stands; far from a fatal flaw for a racing game, but one that robs FAST Racing NEO of the complexity and character it deserves.

Luckily, its gameplay should more than guarantee its longstanding relevance for Wii U owners. Apart from the wickedly difficult single player cups,  FAST Racing NEO also offers a Time Attack mode and both local and online mutiplayer races. Playing split screen does affect the resolution, but the overall performance doesn’t falter, and speeding through FAST Racing NEO‘s gorgeous stages with a friend at hand is great fun. I didn’t encounter any technical hiccups or connection issues while playing online, either, but there isn’t any way to customize your online experience. You and the other seven players in the lobby choose from a random selection of courses, which the game itself then chooses from. There’s no way to choose which speed league you want to play in and no way to set up a four-course cup, but despite the rather simple setup, FAST Racing NEO’s online play is consistently exciting. 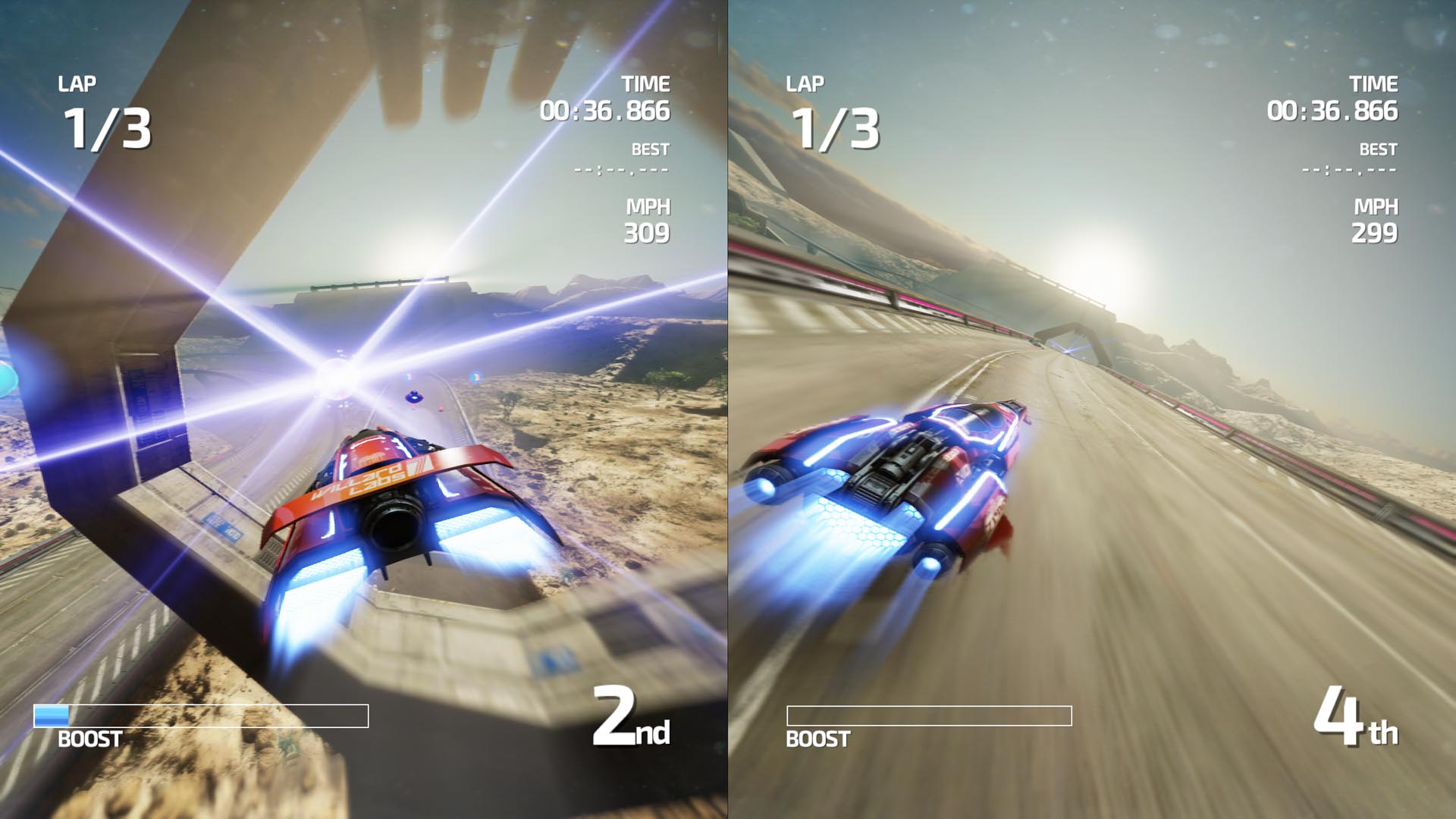 At every turn, FAST Racing NEO bombards players with challenging action. It’s often unforgiving, and doesn’t take any steps to welcome players new to fast-paced racing, but those brave or skilled enough to summit the steep learning curve will find an exhilarating experience that is unrivaled on Wii U. Its color-coded racing improves upon the F-Zero formula, and even if the mutiplayer fails to meet its potential, FAST Racing NEO is challenging and riveting enough to keep players busy for a long while, whether driving solo or with friends.