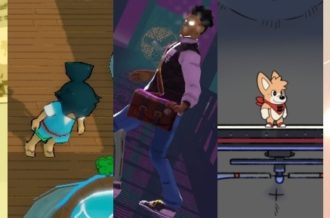 A new Screenshot Saturday is another great opportunity to learn about things you’d never have known about otherwise.  Each week sees an endless list of developers post pictures of their latest efforts, ranging in style from ultra-realism to lo-fi pre-8 bit art, with games in every genre under the sun.  Screenshots are never any assurance of a game’s final quality, but the point of Screenshot Saturday is to see cool new things rather than pass judgement on the final effort, so here’s thirteen of today’s offerings plus a bonus image filtered by standards.  Arbitrary and inexplicable standards, sure, but standards nonetheless.  Don’t forget to click on the arrows for any animated bits, because those images are much more fun when they get to do what they’re supposed to.

#ScreenShotSaturday Some in game footage of our game! Coming to Kickstarter on Jan 20th! #GameDev #IndieDev #JRPG pic.twitter.com/MgnrenEzpa

Children of Zodiarcs- Final Fantasy Tactics-style strategy/RPG, but with dice and cards to give it a tabletop gaming feel.  The tilt-shift camera is doing a nice job enhancing the miniatures-styled look as well  There’s a Kickstarter for the game coming in January, which should do pretty ok for itself if the pitch looks as nice as this shot.

Skatedog-  You’re a dog.  On a skateboard.  I mean really, the title kind of encompasses every piece of relevant information about the game in a single compound word.

Grimsfield-  Kafkaesque adventure where you’re a poet trying to get a license to read at open mic night.  Grimsfield is a short game set in a single office building filled with rules and the people trying to follow them, all caught up in a bureaucratic tangle that makes even the simplest request a runaround.  It’s currently on Greenlight looking for a home.

Duck Shooter-  There’s no name for whatever this turns out to be, but those are some awfully cute ducks wielding lightning guns.

The Flame in the Flood-  Surviving a trip down the river would be a lot easier if civilization hadn’t fallen to ruin.  In standard roguelike tradition you get one life and the encounters are generated new for each journey, making each trip an exercise in adaptation.  Currently the game is in Early Access, and the only mode available is Endless, but it’s a good survival challenge and the bears shown here aren’t going to make it any easier.

Klepto-  That blobby grey thing may be art but it’s still not fetching a decent price on the black market until it’s got a decent texture map applied to it.  Klepto is going to be a game of thievery, where you start as a low-level Amateur performing breaking & entry raids and working through Expert, using more subtle techniques, and Professional, who have access to a variety of tech toys.  The game has already cleared Greenlight, so now it’s just a wait for the Spring 2016 Early Access arrival to see how thief-y it ends up being.

LDJAM Game-  The latest Ludum Dare game jam is going strong this weekend, tied between Two Button Controls and Growing, and at a guess this one looks like a two-button entry.  Whatever it turns into, it looks nicely Star Fox-y.

Parkour-  Another game with no information, but that’s a really nice environment to run some parkour in.  Don’t neglect the shadow of the player character being cast on the orange building, ready to jump off the edge and into the urban playground.

Garbage Day-  Open-world action game where time keeps repeating, so the actions of one day are erased on the next.  You might have more info to follow the plot just a bit farther, or you might have spent the day driving cars through houses.  Everything breaks, so it’s kind of hard to resist leaving the town a smoking crater.

Sector 13-  Third person multiplayer arena space shooter.  Fly through asteroid fields and past space stations as you fight other players for dominance of some very pretty maps that are cluttered with objects in exactly the way space isn’t.  Sector 13 is currently on Greenlight and also Kickstarter, looking for love in all the places a game still in early development could hope to find it.

My Friend Pedro-  Acrobatic side-scrolling gun ballet, where you’re a killer taking missions from a flying banana.  It’s unclear at the moment what kind of pay a flying banana offers, but apparently it’s enough to justify putting a whole lot of bullets into a whole lot of people.  The trailer has a few more details, but the short version is that acrobatic gun violence is the best gun violence.

Wizard of Legend-  Being a wizard isn’t a job for old men with long grey beards, but rather nimble warriors casting spells at high speed on battlefields packed with monsters and other sorcerous enemies.  The more spells you earn the better the combo you can put together, hopefully using them to dominate the arena instead of coming home as a little pile of ashes.

The Count Lucanor-  A fairytale adventure, except it’s the unedited version where Cinderella’s sisters carve off chunks of their feet or the lazy cat eats his friend the industrious mouse because he’s a cat and that’s what they do.  In this story a poor young boy named Hans must survive the horrors of a castle to become the Count Lucanor.  The main game looks more 8-bit, while the cut-scenes like this one are more Sega CD style except without the horrible blockiness.

Rumpus-  Dance!  Dance like there’s no tomorrow and your purple mohawk is offset with a cybernetic eye!