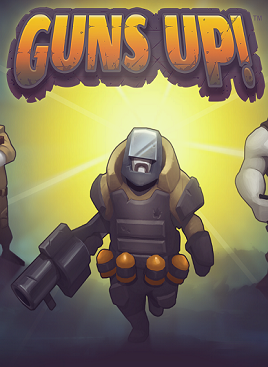 The advent of free-to-play titles on consoles has seen its fair share of winners and losers. For every great title that seems to play fair by its audience, like Neverwinter or World of Tanks, other more mercenary experiences can be found. This doesn’t even factor in the full price titles riddled with microtransactions, like so much mold in a home’s framing. Still, it’s a business model that has seen no small amount of success. Valkyrie Entertainment, San Diego Studio, and Sony Computer Entertainment of America has taken a stab at getting a piece of that pie recently with Guns Up! While the explanation point indicates excitement on the title’s part, it isn’t quite ready for that level of enthusiasm.

Simplicity is the true name of the game here. The action amounts to a hybrid of tower offense and defense. Where players will spend most of their time is in the attack mode, done via player versus player. Here, the player starts with a transport truck that is slowly making its way towards enemy fortifications. Using a pre-supplied amount of munitions (read: currency), players spawn squads of troops. The troops can range from simple grunts with single action rifles, medics, rocket launching power houses and more. As the player moves from the left to the right, the troops will act autonomously, gunning down the opposing forces and destroying emplacements. These will drop additional funds to be used to bolster the ranks as they fall in the line of battle. Eventually, they will reach the headquarters, shooting it until it explodes. Apparently, they have their ammunition supplied by the same people who provided for Bill and Lance in Contra.

Beyond currency management, the battles also require players to make use of specials. Each attack starts with three of these spawning next to the truck. Strategic use of these does make all the difference between success and bitter, tangy defeat. Is a group of troops providing too much resistance? Toss out a tear gas to briefly stop the defensive fire. And look! /\/\DudeBro420/\/\ put a sniper tower and a troop spawning tent right next to each other! A well-placed fire bomb will burn this down with minimal muss and fuss. This does serve to add a sense of player agency in a game that would otherwise be spent waiting on timers and funds. 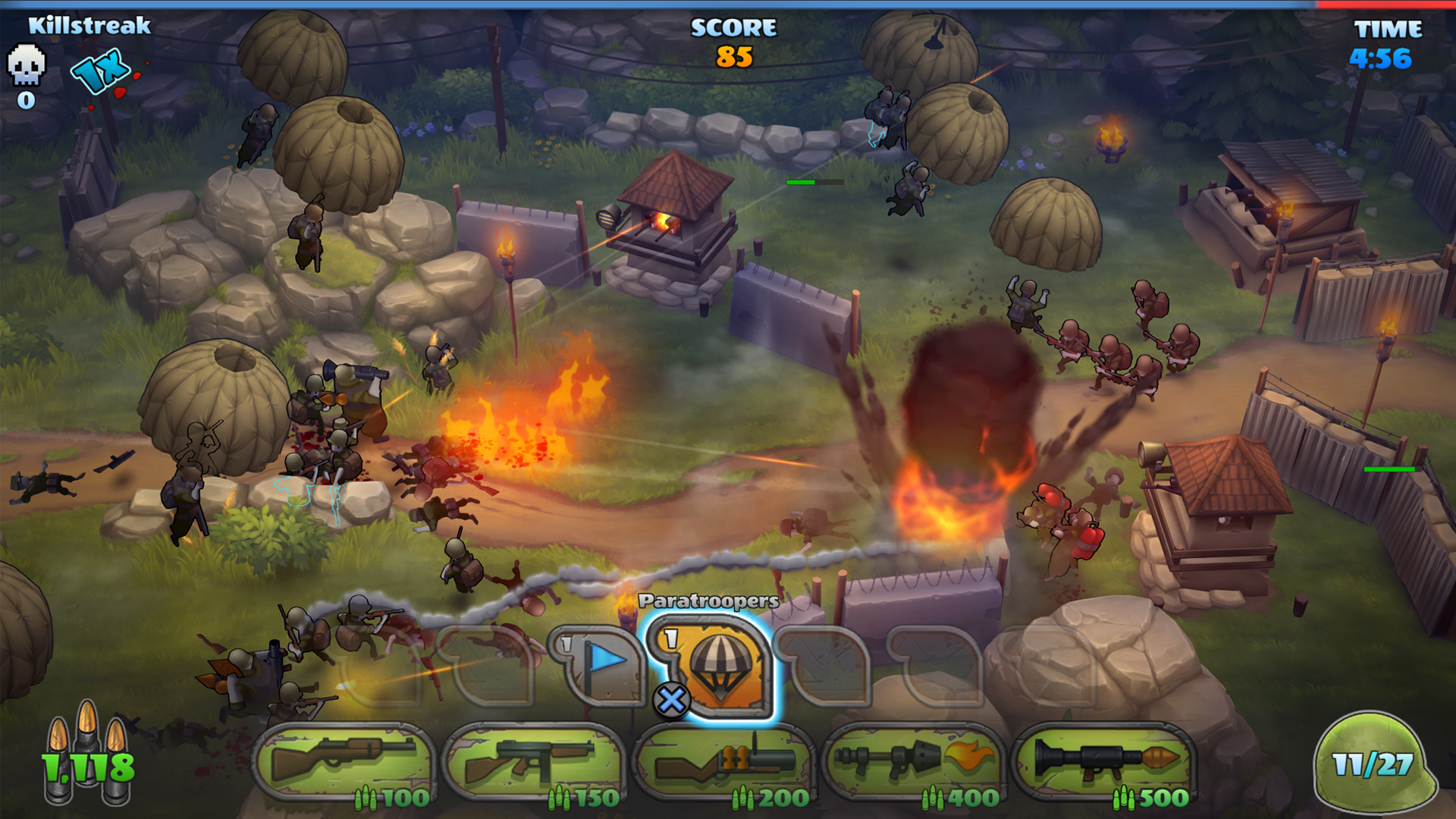 The other half of this title is defense. Every player has their own base that can be raided while the player is away. By spending funds earned in missions, the player can expand and improve on defenses. Machine gun emplacements, mortar launchers, and more can be built and upgraded to provide the ultimate in home defense. It’s also an easy matter to test the current configuration. Players can opt to invade their home base to see how well it holds up. A survival challenge mode is the true test. Here, an unrelenting and unending wave of AI controlled enemies will invade. Defeat is a given. The goal is simply to last as long as possible. Hitting certain milestones yields rewards.

Now, saying “free to play” to most seasoned gamers typically results in follow up questions regarding where the money comes in. Thankfully, it can be said that there are no “energy mechanics” to prevent the audience from playing until their heart’s content. Here, there is the expected cosmetic items. Additionally, there are card packs. These cards can do many things. Some are swapable stats boosts can be applied to troops. Others cards can be burned before entering battle to provide a bonus special ability. Still more can increase the limit to what can be placed in a base. The randomness of these packs can be troublesome. They do come in multiple varieties. As premium currency can be earned in game, the best advice that can be given is to hold onto it until enough is earned for the epic tier. These packs provide the most permanent boosts and fun things to play with. There are also XP boosts available to purchase for the impatient, which makes the tedious grind that can occur much more palatable.

What really prevents this title from being great are the technical issues. As this is a title focused on asynchronous multiplayer, an online connection is required. The sign-in process can take between two to three minutes, which prevents quick check-ins during a break from a larger game. Signing in and staying online can also be a hassle. During testing, there was a full evening where I was not able to get into the game at all, being met instead with “timed out” messages. I was also kicked off the server more times than is healthy. These issues could simply be because this is a new title and the audience will even out. Still, these problems should cause some serious hesitation before dropping some funds into it. 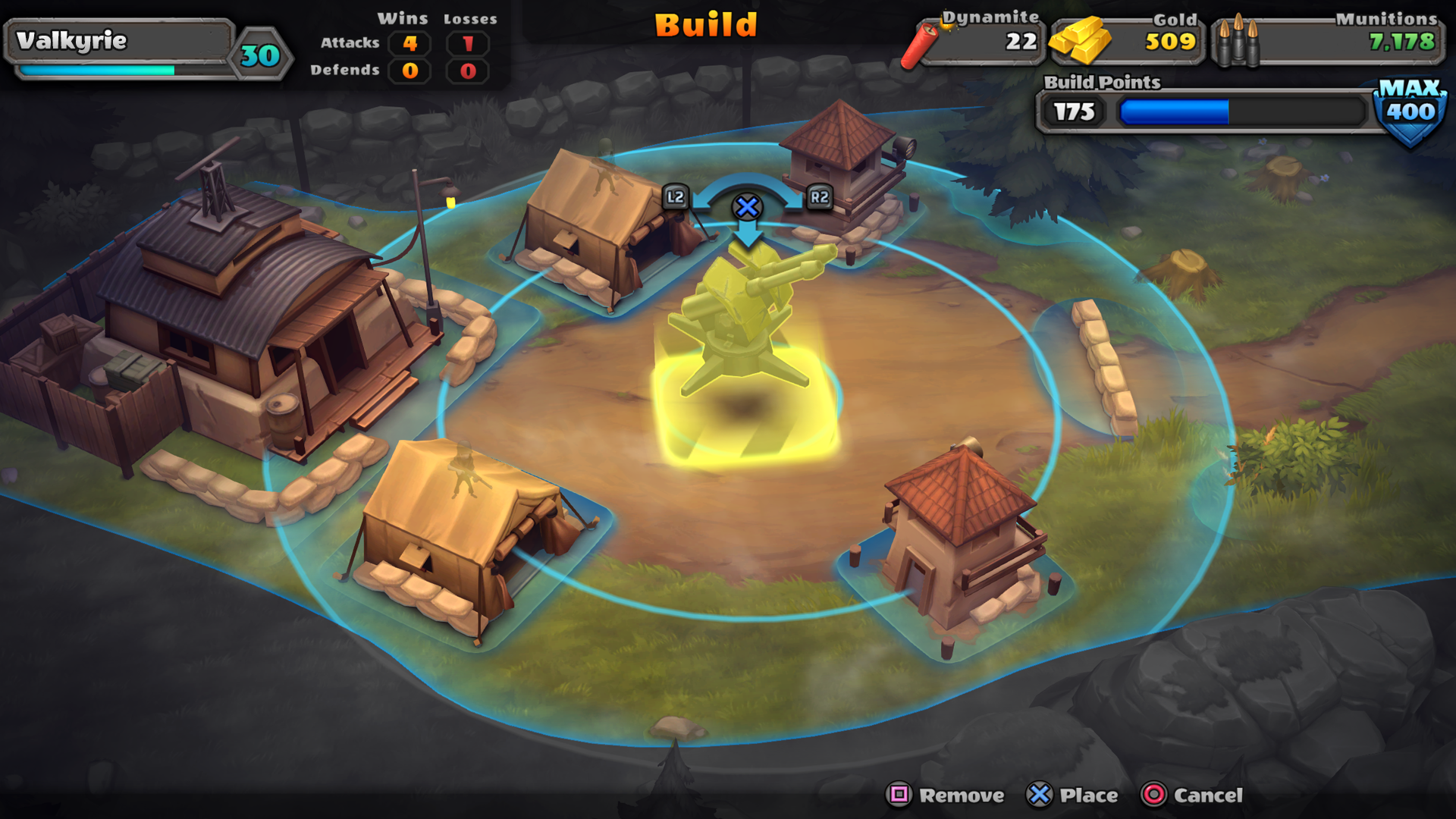 Guns Up! isn’t terrible. In fact, were it not for the technical issues, checking it out would be a no-brainer. The simple battles with their special moves are entertaining in short bursts and having sole ownership of a piece of property to defend lends a real sense of empowerment. In the end, though, the desire to see how a base has held up under attack is outgunned by the lack of desire to actually sign in and check the darn thing. Should these wrinkles get ironed out, then everyone should say “‘sup” to Guns Up!