Pokkén Tournament is one of the most highly-anticipated Wii U games and it may just prove to be one of the console’s last great games (and will prove to be the last — and only — retail Pokémon release). With the Japanese Wii U version releasing in March, Nintendo has tonight revealed its box art. Similar to the key art for the arcade version, the cover features Pikachu doing battle with Lucario.

It’s simple, but gets the job done. 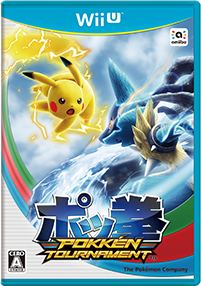