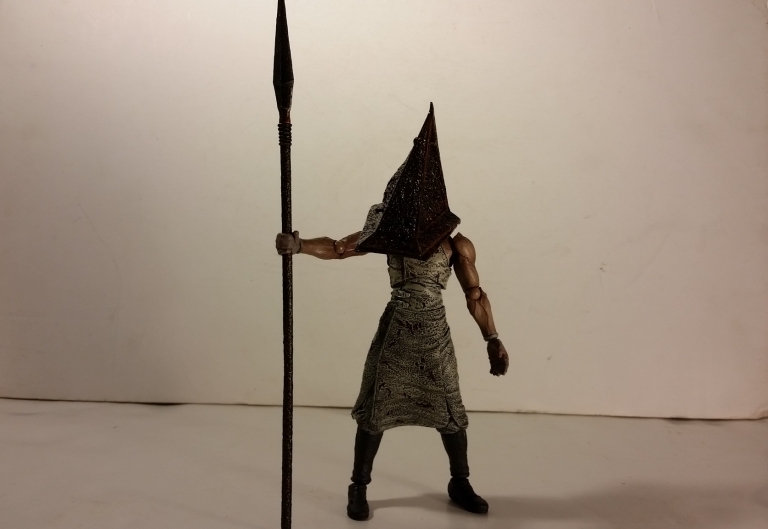 The Silent Hill series is one of my favorites, and like many fans, my favorite creature from the series is none other than Pyramid Head. Somehow, this enigmatic being from Silent Hill 2 has managed to maintain its popularity over the years — even extending his reach to both the Silent Hill films as well as Silent Hill: Homecoming (not always to the chagrin of fans). In any case, those most devoted to the series know that, actually, the words “Pyramid Head” were never actually uttered in-game or via in-game documentation. Instead, references peg him at scariest as the Executioner and, at weirdest, that “red pyramid thing.”

The new series of Silent Hill 2 Figma use official terminology. As such, figure SP-055 is known as the Red Pyramid Thing. It stands a little over seven inches tall and comes in a suitably dark red and black Figma box. Inside, the figure comes packaged with eight different hands (four sets), two neck pieces (I’ll explain why shortly), a clear stand and connective clear connector piece, spear, and Pyramid Head’s signature Great Knife. The four sets of hands include closed fists, open and grasping, closed with room for spear, and sized for clasping Great Knife. Each can be placed separately to create just the look you’re going for. Theoretically, it’d even be possible to do silly stuff like equip both weapons at the same time. 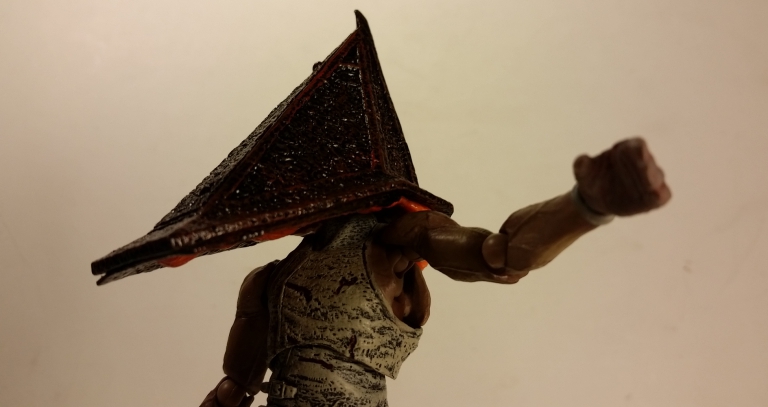 One of the more interesting poses — and a total spoiler for the climax of Silent Hill 2 — is the ability to swap out his neck portion. You do this by first pulling off the head (the entire triangular head is one piece) and then the neck portion separately to swap it for a modified neck. The new neck has a hole in the center which can be used to attach the spear, so it appears that Pyramid Head has speared himself in the neck. Promotional images of the figure make the effect look super convincing, but I found it entirely too troublesome to make this work at all. For one, pulling the neck portion off requires a fair bit of force (dangerous when you’re dealing with small, easily breakable plastic pegs), but actually getting the spear to stick proves challenging. For me, it didn’t appear the hole and peg were actually the right size to make this work. Ah well.

The Red Pyramid Thing Figma has sixteen joints: twelve between both arms and legs and four on his body. This leaves room for a lot of creativity when it comes to posing. Given the included plastic base and jointed clear connector, you can also get your figure into an unbalanced pose and keep it that way, if so desired. For the most part, many of the joints appear pretty concealed aside from the very apparent ball joints on the figure’s arms. Even so, the coloration is similar enough (if unshaded) to keep it from being too annoyingly noticeable. Depending on how the hands are posed, you might also get a good glimpse of the grey wrist ball joints as well. 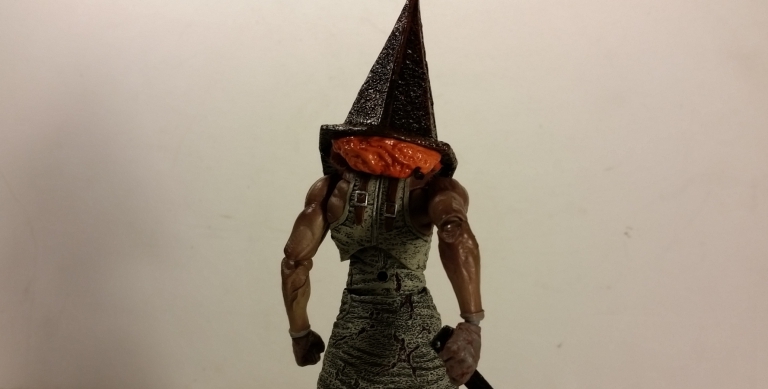 Overall, this Figmas has a lovely amount of detail in it for the approximately $50-$60 price tag. Pyramid Head’s butcher smock is appropriately creased and torn with bloody prints. His arms are muscular, but not ridiculously so as in the film versions, and feature popping veins. The helmet, in a similar treatment to the clothing, is heavily textured with pock marks but also includes cracks. Overall, it looks like a rusty mess which is just what fans want. In a personal annoyance, this is yet another Pyramid Head figure featuring some seriously nasty pinkish blob coming out from underneath the helmet. I’m not sure where this design first appeared, as it is not in original concept art, but it certainly adds a disturbing effect.

There are over a handful of Pyramid Head/Red Pyramid Thing figures which have come out over the years. Of course, most are out of print at this point while only the latest SP-055 Figma remains available. For the cost, it’s a great, highly poseable figure for fans looking to get Pyramid Head on their shelves without breaking the bank.