Perhaps the weird gaming void that December has created in my heart is a result of constantly playing the newest, freshest game out there. When you live the strange life of a gamer guided by the annual release schedule, things start to get a little weird when games stop coming out so regularly. Sure, there are releases every single week, and games like Squad teach us that the video game world wouldn’t function if something wasn’t going quasi-viral, but December always functions as a month to dig into that backlog and play whatever you want. The thing is, when your options are limitless, your desire to do anything can often wane.

There are hundreds of games that I could play at the touch of a button, but none of them feel all that compelling. Here’s a list of everything that I’ve fooled around with over the past couple of weeks before shuffling onto something else: Gears of War: Ultimate Edition, Super Mario Bros. 3 (a personal favorite), Suikoden II, Persona 3 Portable, Rust, XCOM: Enemy Unknown, Resogun on Vita, Nuclear Throne, The Novelist, Call of Duty: Black Ops III multiplayer and Mario Golf: World Tour. All of these games, with the exception of lovable garbage heap Rust and The Novelist, are widely considered to be wonderful, and some of these are titles that I’ve enjoyed in the past, but nothing is sticking. What makes this something that’s worth writing about and not just a brief whining session from yet another entitled gamer on the Internet, is that this is a phenomenon that others are experiencing around the world as well.

There was a time not too long ago where games were much more difficult to access. Sure, you could go to the store and purchase expensive cartridges, CDs and DVDs, but games are both cheaper and easier to buy than ever before. Even if you’re someone who prefers physical media, there’s becoming less and less of a reason to to go to the store and pick up your game thanks to online retailers and guaranteed release date delivery options. Oh, and those who embrace the impending digital future are more equipped to crumble at the insurmountable mountain of choice, as millions of gaming options are available with a few button presses or clicks. Do you sigh when thinking of the size of your Steam Library (which is totally going to grow even fatter when the Steam Winter Sale kicks off)? Have you ever wondered what your date is going to think about that insane shelf of plastic boxes in your living room? Do you ever have the first-world mental debate over which device you should use to watch Netflix? We live in a world where we are able to play whatever whatever we want at whatever time we want, which eliminates that sense of wonder that comes from that non-negotiable drive to the retailer of your choice to pick up the only game you’re going to play for the foreseeable future.

Of course, this is a completely privileged take on the current gaming landscape, but visit any message board, Steam group or comments section and there are tons of people who play games this ravenously without ever leaving their living rooms. When you can do literally anything, it’s tough to do anything without some sort of motivating factor. This can be as simple as your friends hyping up a new game or as intense as a deadline for a review, but when your options are narrowed in some fashion, the ocean of games out there suddenly feels more like a puddle. Think about when Bloodborne, Rocket League or Destiny: The Taken King first came out. You couldn’t take the time to blow your nose in between all the coverage and conversations about whichever flavor of the week you’re picturing. When it comes to December, that sense of keeping up with the Joneses completely disappears, which creates this strange, naked feeling for those of us who constantly look at upcoming release dates. 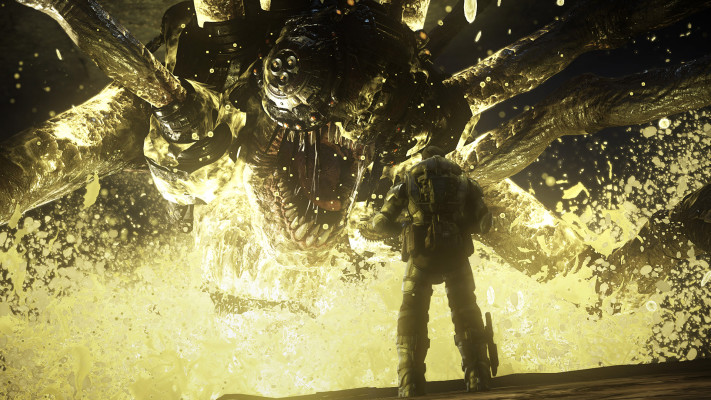 The frosty December Hell isn’t something that doesn’t have a bright side on the other side of the horizon, though. Everyone out there has their list of 2016 games that they’re stoked about. The Division is interesting to me, namely because it’s supposed to contain my multiplayer shooter dream of an in-game multiplayer arena that you actually have to walk to. Below has always been one of my favorite future games, as Capy’s tough-as-nails part Zelda, part Dark Souls roguelike has demoed phenomenally at whatever show its been present at. Darkest Dungeon seems like it’ll be perfect on the Vita, though perhaps not as perfect as Drinkbox’s first post-Guacamelee title, the Vita-exclusive Severed. Horizon: Zero Dawn is fascinating, even though its potential hinges on the Killzone studio crafting a story that’s actually enjoyable and deeper mechanics than that team has ever constructed before. Oh, and how can we forget about Tacoma, Firewatch, Unravel, Cobalt, Uncharted 4: A Thief’s End, Quantum Break, Sea of Thieves, Abzû, Hyper Light Drifter, Final Fantasy XV and ReCore? The best part about the impending awesomeness that is a new year of video games smack dab within a generation: the games listed above are just a personal list of intrigue, meaning there’s so much more than this to come.

So if you’re like me and stuck inside weird video game purgatory, where it seems like every Steam game in your library is set to get a mere fifteen minutes of playtime, just remember one thing: it’s going to get better, don’t you worry. This weird month that cripples us through choice is set to end soon, so we can all get back to fresh gaming.