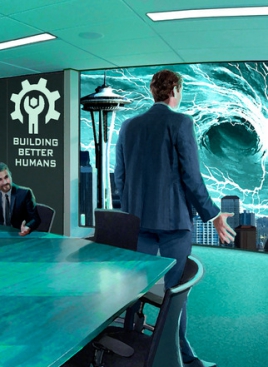 Video games have come a long way over the years. Back before the gorgeous graphics and powerful systems were much simpler titles. Some of the most popular were text adventures. As the name implies, text adventures were adventure games explored purely through reading and providing written actions to progress the tale forward. Despite the increasing technical prowess of gaming as a whole, text adventures have continued to flourish (albeit, outside of the view of most gamers today). One version of the text adventure is known as a “choose your own adventure” — akin to the physical book brand of books that let you make pivotal choices to change the outcome. Visual novels have picked up the CYOA motif as well, although they typically add in imagery and sound to the equation.

One of the latest entrants into the CYOA world is MetaHuman Inc. by Choice of Games. Those modern day fans of text adventures should recall this name as a well-known developer and publisher within the genre. Their latest release takes on a very different sort of setting as compared to most games out there. Instead of inhabiting the shoes of a teenager/anti-hero tasked with saving the world, you’re one of many staff members within a massive corporation known as MetaHuman. Things immediately become interesting as, the moment you enter the game world, the company’s CEO has disappeared. Before this untimely vanishing act, he has gone and appointed you as the next head of MetaHuman. Nobody knows why this choice was made — least of all you — but everyone follows along and grants you more power than you’ve ever wielded before.

This power isn’t simply relegated to that of holding the reigns of a immense company in Seattle. You see, MetaHuman deals with Enhancements. These technological, biological (and magical) devices are implanted into users who wish to increase their bodies beyond human limitations. For example, one Enhancement might grant the wearer far better vision than ever before while another may grant them superhuman speed or strength. These consumer Enhancements are expensive, but as CEO, you’re free to choose any and all to imbue yourself with as they’re researched and perfected. As should now be obvious, this isn’t quite the normal business that you’ve just taken leadership of — and that’s just the tip of the iceberg. Also revealed at the very beginning is the fact that MetaHuman has been able to develop such impressive Enhancements thanks to magical powers and beings rather than pure science. Yup, things are off to quite the interesting start in MetaHuman Inc. 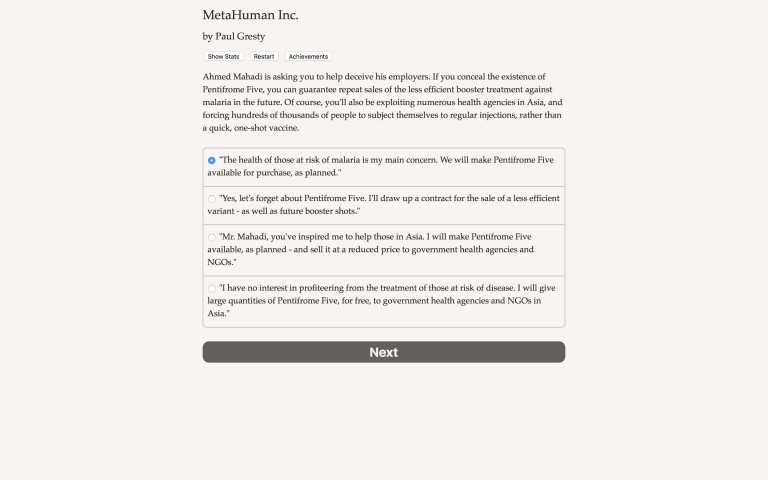 There is an undercurrent of the supernatural at all times, but there’s still a fair amount of corporate intrigue and other business dealings that players must manage. After all, you’re the CEO of a publicly-owned company. On the less mystical side of things, you must manage the monthly budget of MetaHuman which determines what Enhancements to research/perfect, as well as whether you’d like to improve the public image of the company or work at improving internal morale. Although it’s not outwardly apparent, tons of stats are being tracked throughout based on your choices which determine how later events play out. Not having high enough stats means certain choices will play out differently and also that certain Enhancements simply can’t be manufactured. As far as obvious gameplay is concerned, there’s a lot more in a CYOA of this nature than a typical choice-only visual novel.

With that said, anyone coming in with a background of visual novel-play (such as myself) will be in for a rude awakening when it comes to the lack of text presentation options. Basically, what you see in the screenshots for MetaHuman Inc. is exactly what you get. The design option of a black serif font on a slightly off-white background makes sense from a CYOA perspective because it mimics the look of physical books. However, given the digital format, Choice of Games should seriously consider adding in options to tweak the look and font. After all, reading on a white background for hours can become quite tiring for some folk’s eyes — not to mention the relatively small font size. Given that sans serif fonts are typically viewed as better for online reading, there’s also an issue with the lack of font choices. Simply adding in these features would definitely improve the comfort level of readers of their games. 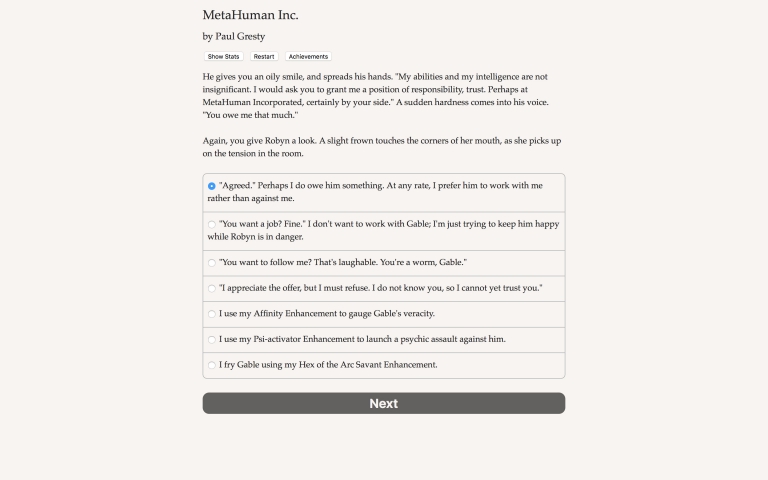 These things matter when the typical player will spend somewhere between two and six hours reading MetaHuman Inc. for the first time. Of course, there’s a lot more to the game for those who initiate multiple playthroughs. After all, it’s very unlikely that you’ll get a super great ending the first time through. There’s also the matter of achievements which require you to resolve different circumstances in specific ways to unlock. In total, players could be spending over a dozen hours trying to uncover every ending and variation of choice. Luckily, the compelling writing and odd mix of corporate intrigue with paranormal incidents creates quite a cool world to experience. Very, very few typos were present in the release as well, which is a feat given it comprises around 75,000 words in total.

One final thing that fans of visual novels, or really any games in general, will miss from MetaHuman Inc. is its total lack of music or sound of any sort. There’s no orchestral or electronic score to keep pace with the storyline. Heck, there’s not even a sound notification when you make a selection in game. Basically, it’s very much a digital book with stat tracking abilities. While that’s not a huge loss, it is important to know before jumping in for the first time with false expectations. On a plus side, the Steam page is very clear as to this being a purely text-based experience so that people won’t get confused. More visual novels and text adventures could stand to offer such transparency on their own store pages. 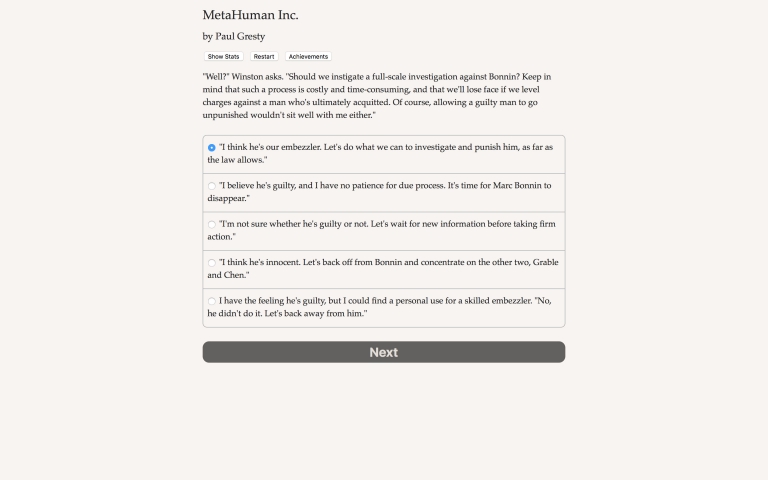 MetaHuman Inc. is a CYOA title which tells an oddly compelling story and leaves tons of room for replayability. You can choose to be as charitable or corrupt a CEO as you wish and see how it all plays out. One must come into the game fully aware of its lack of bells and whistles, though. Those curious about the genre can check out a free demo of the game on Steam (or their Android/iOS mobile device of choice) before diving in. In my opinion, however, the release works best on a phone and not a PC. This is because the glaring white backdrop is not as annoying in small form and it’s easier to pick up and play with ease. No matter how you play it, you’ll be in for quite a time as MetaHuman’s totally unprepared CEO.