Imagine a game of chess, where before every turn you had the opportunity to swap out pieces for others more appropriate to the situation, or take the pieces you already had but strengthen them or make them more flexibly powerful. Imagine too that this game of chess was multidimensional, so that some pieces were more powerful on higher ground, and that further, you could cast spells on opposing pieces to slow them down or make them immobile. Now, imagine that the success of your brilliant strategy, the efficacy of every move you made, was subject to whim of a random number generator. Essentially, then, you’d have two games existing simultaneously: a game of tactics, strategy and skill, and a game in which the luck of the draw and randomness could at any moment undercut the victory right from under you. That is Chaos Reborn, a turn-based strategy game that comes from Snapshot Games and X-Com designer Julian Gollop. It’s based on Gollop’s 1985 Games Workshop Chaos, and follows many of the original’s tenets.

There are many games that pretend to be “easy to learn, difficult to master,” when it fact this translates to “the basics are easy to learn, the rest is convoluted and opaque.” Not so Chaos Reborn, the gist of which truly can be learned in the game’s excellent tutorial, itself a minor masterpiece of pacing, clearly introducing the game’s mechanics one step at a time in the form of simplified matches that are entirely possible to lose. By the time you finish the tutorial and its supplemental bonus missions, you will understand the game.

It could be argued that Chaos Reborn is fundamentally a turn-based, collectible card strategy game visualized with three dimensional figures on levels of varying complexity. Except, you’re not building decks — there is little control over the “cards” you’re dealt — and movement and placement both play significant roles in the game. Each match consists of 2-4 opposing wizards, who conjure creatures, cast spells offensive and defensive spells, collect mana (which boosts the likelihood of casting a successful spell), and try to stay out of the line of fire. Each turn consists of moving the animal, spirit, and undead creatures around the hex-based map, and casting a spell to either summon a new creature, buff and existing one, or attack somewhere on the map. 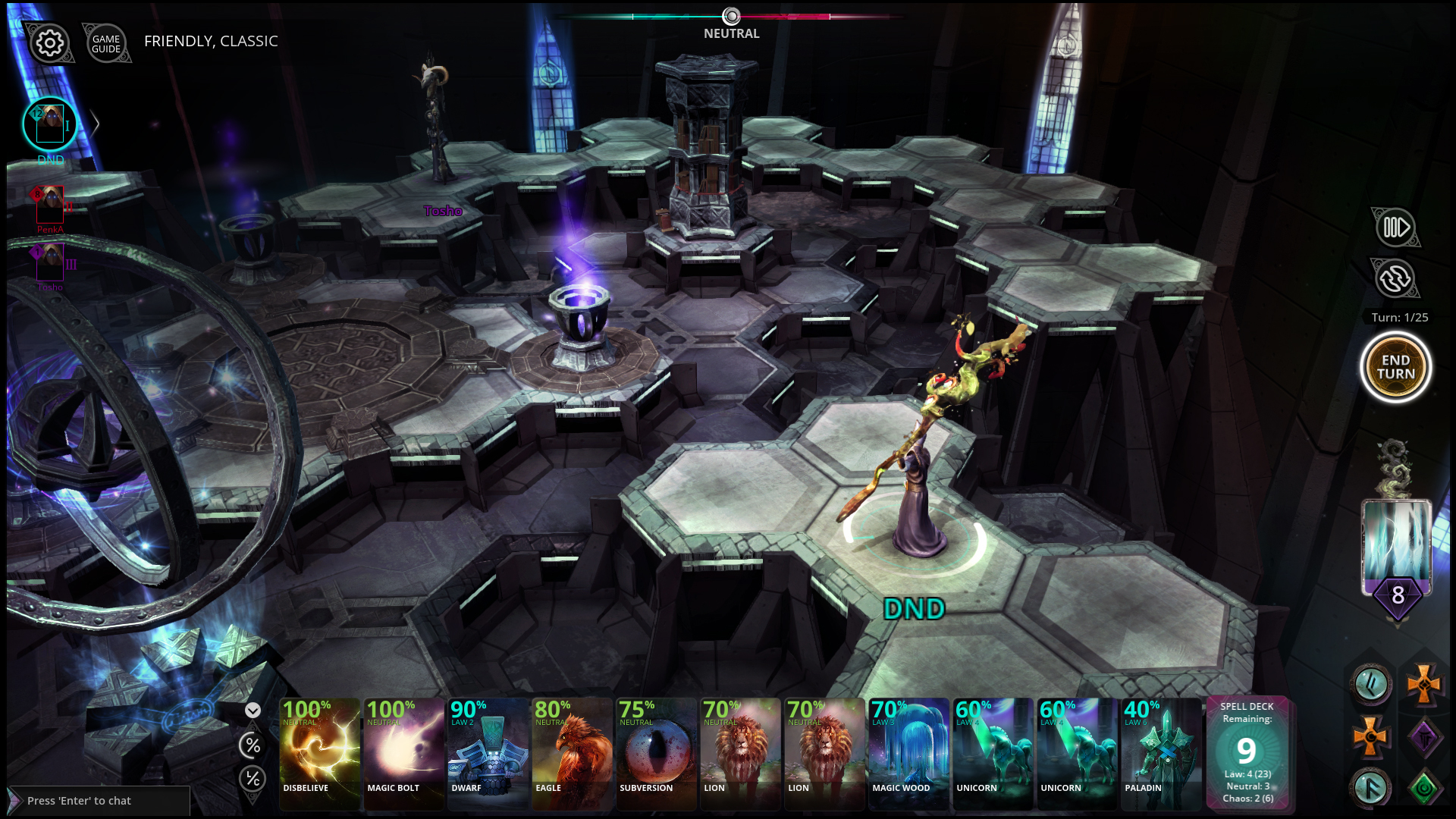 Each creature/spell “card” has two important stats: the percentage of likely success, and an alignment as neutral, lawful, or chaotic. The match has a meter that shows the “world tendency.” Cast a chaotic creature into existence, and the world tendency turns more chaotic, boosting the chance that additional chaotic spells will succeed. The meta game of manipulating the world tendency to increase your odds is yet another layer to an already richly textured experience.

Every creature summon has a percentage chance of success, but wizards can also summon an Illusionary version of a creature. It has the same power as a “real” creature, but it has a guaranteed, 100% chance of being successfully summoned. What’s the catch? The opposing wizard can cast an always-available Disbelieve spell. If the wizard guesses correctly, the creature disappears and the wizard gets another cast. Get it wrong, and you’ve burned your cast for that turn. This poker-like bluffing mechanic is sort of brilliant and unique.

There is a lot to learn in Chaos Reborn, and having a winning strategy is important, but hanging over every choice is the random number generator. Look, that creature summon has a 90% chance of success. It’s a sure thing, right? Ah, but there is a 1 in 10 chance it won’t work. And that lowly rat can get lucky and bring down the giant. 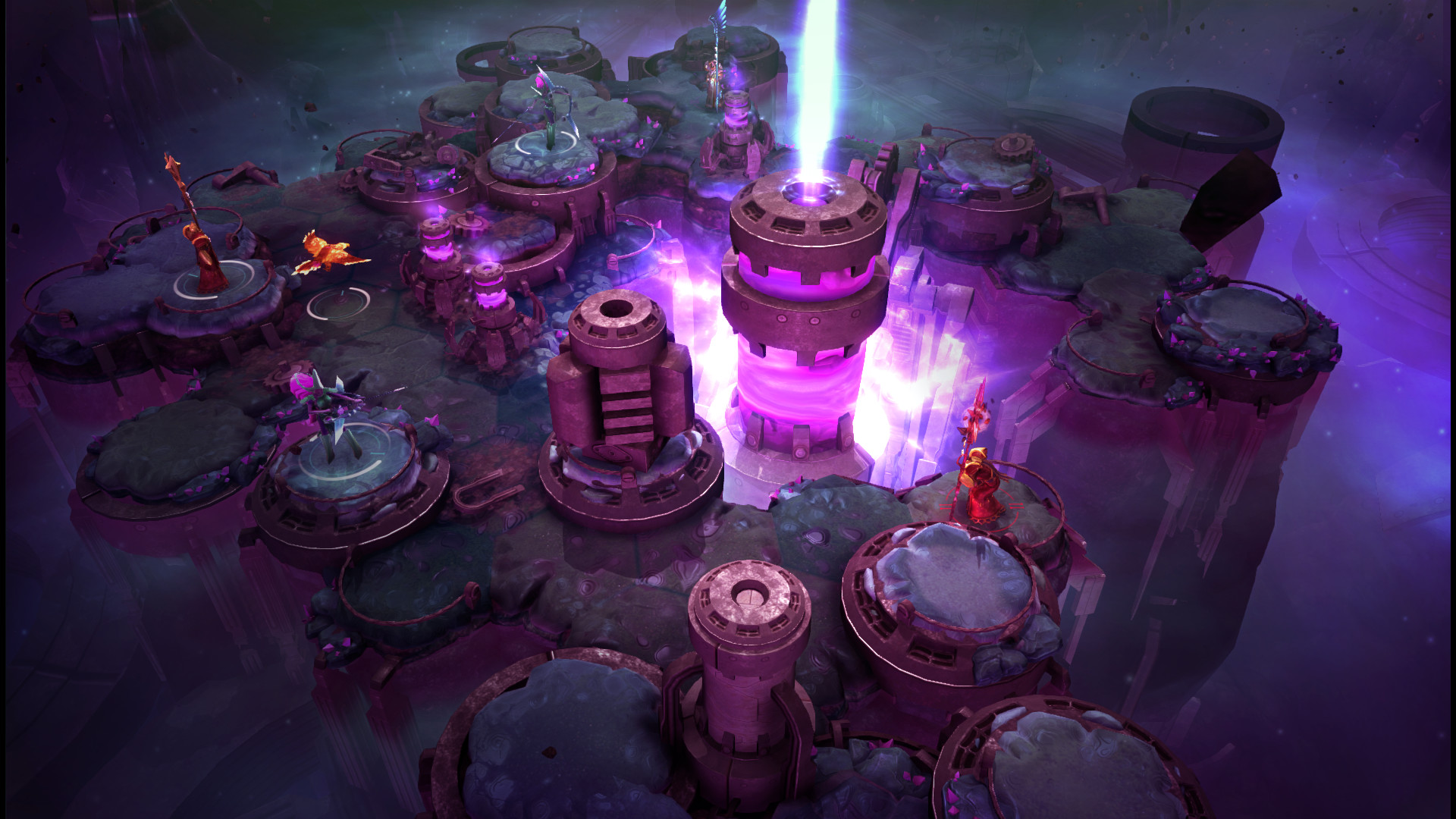 Chaos Reborn has a forgettable, apocalyptic-earth-rending-mage-war story that boils down to two wizards slinging spells at each other in the end. There’s a single player campaign that’s a little like that of the Puzzle Quest series: an overland map through which the wizard journeys and picks up creatures and abilities to bring into the battles, serving as an extended tutorial and training ground. The multiplayer aspect of Chaos Reborn is well executed, with co-op and versus 1-4 player online matches, a bit of world building, skirmishes versus human players or AI, and a simple economy that allows gold earned in matches to be used to buy items.

The game looks good, if not exactly bleeding edge. The maps are generally small and feature lots of colorful touches and lighting, the creatures and spells are engaging, and the music is appropriate to the genre, symphonic and archaic by turn.  This is a game that has such strong mechanics and systems that the visuals simply aren’t a focus. On an older, slightly less capable PC, the framerate tanks when lots of creatures and spells are crowding the map. 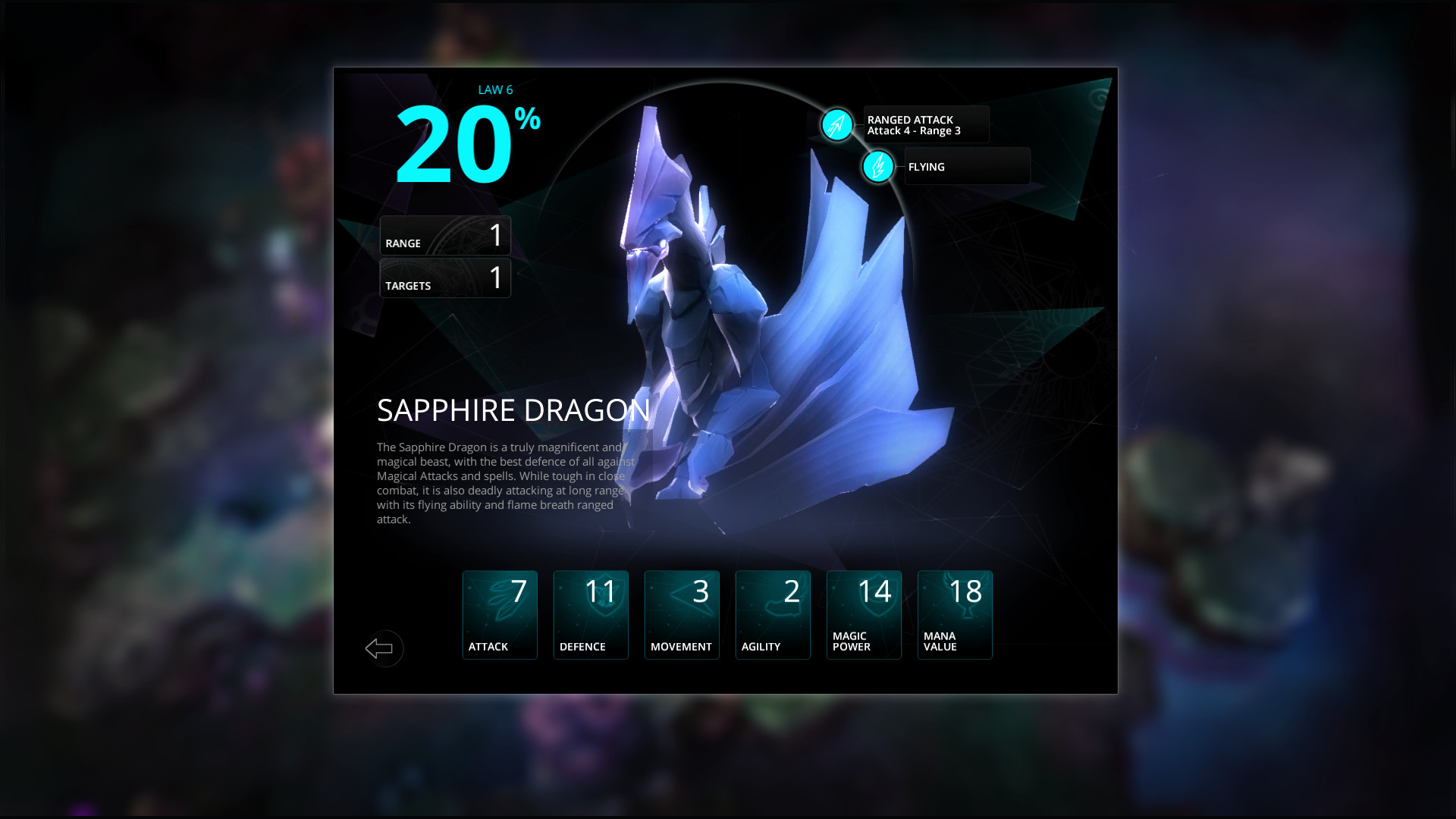 After playing Chaos Reborn’s excellent tutorials, you’ll both comprehend the game and understand — probably many times over — what it means to lose to the forces of randomness and bad luck. Every hour spent thereafter will deepen your appreciation for the game’s systems and strategies, which are elegant and unique, but there is no escaping the random number generator and the pain or glory it can bring. With a pedigree of the original Chaos, plus chess, poker, X-Com and Hearthstone in its DNA, Chaos Reborn still feels like a refreshingly different type of strategy experience.