The world of Substream is infinitely wide and kind of narrow, both at the same time.  The repeating levels stretch to the left and right, each part a copy of a long, straight band that scrolls ahead but with no walls to stop you from crossing the line of repetition.  While technically you’re attacking the level alone, everything in the band is repeated and that includes the smooth curves and twin shots of your ship as well as the enemies in your path.  Set the entire level to music, with each pulse of the background and  attacking enemy wave hand-synched to the beat, and you’ve got a musical Star Fox-style shooter with a great little gameplay hook.

The Substream demo landed on itch.io today and it’s a fun and oddly relaxing rail shooter.  The two levels in the demo are set to completely different styles of music, and the pulsing, dancing backgrounds change to reflect the mood as the song plays along.  In one level the ocean’s waves turn into rippling ribbons and then rise up to limit horizontal movement, and while that’s a one-off situation is does make me want to see what else might happen in later levels.  The primary threat comes from the enemy waves, of course, and this is where the horizontal repetition start making Substream a little tricky. 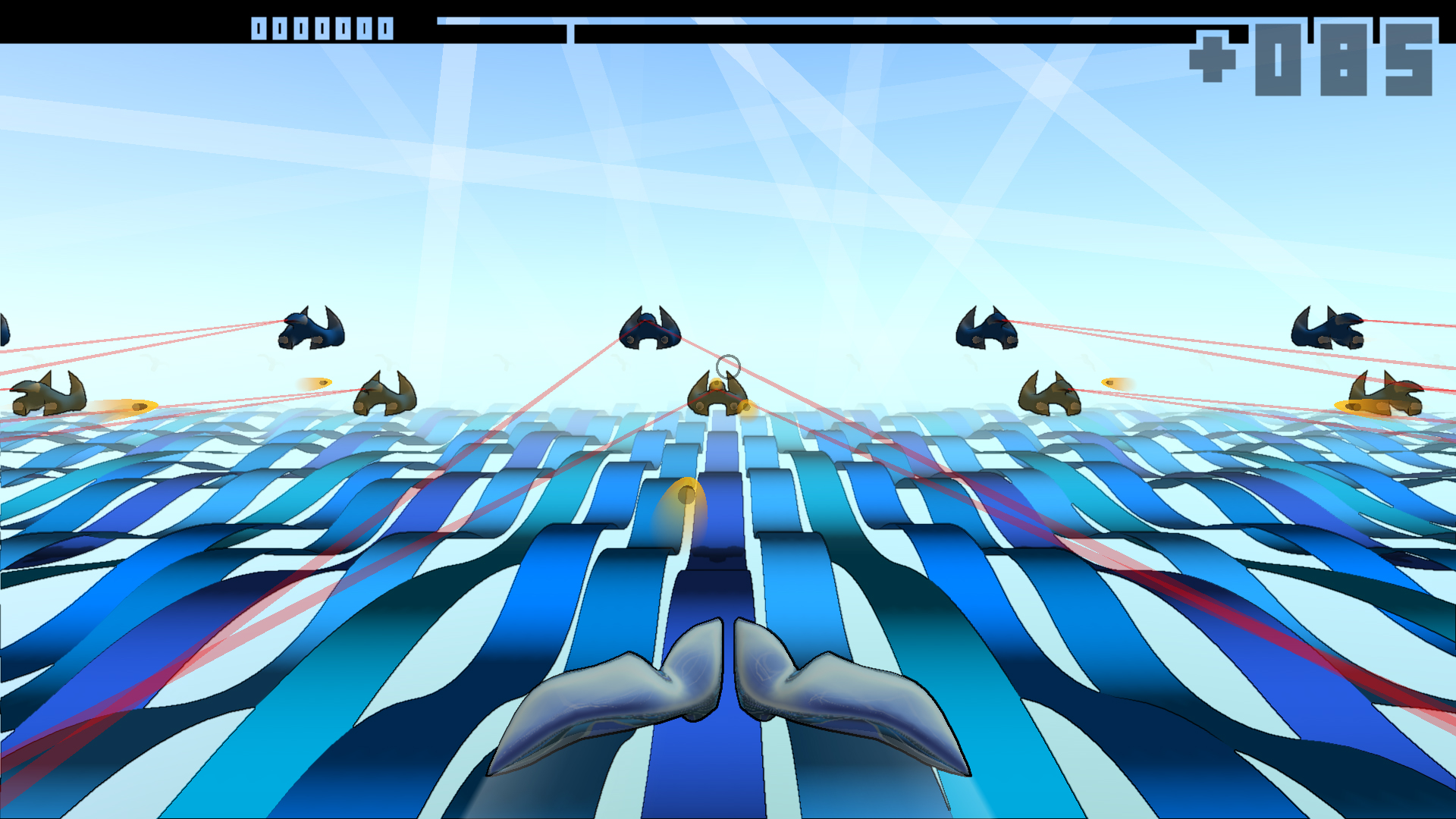 A single enemy isn’t generally much of a problem, but when the level repeats infinitely left and right that means each potential threat does as well.  A set of three ships firing directly at you is easily dodged, but when they turn into a horizontal wall that becomes an actual threat.  Each of your repeated clones is firing exactly the same way you are, of course, and taking out one enemy opens up a hole in the offense in each of the duplicated bands, but it’s still easy to take a few hits even with full vertical and horizontal movement.  Fortunately you can angle left and right to a good degree, and can even see yourself stretching away to either the end of infinity or the draw distance, but that’s also another tool to use against you.  An enemy in the second of the two levels has shields that are angled such that you’ll need to target the version three or four repetitions over, otherwise the shield reflects the shots right back where they came from.

While Substream is still early, and the demo is technically the beta version of the game, there’s some really clever and pretty action happening in it already.  Like Hyperspace Invaders II before it, the game is basically a music album set to a unique shooter, with the tempo of the action hand-crafted to work with the beat.  Give the demo a once-over and maybe a vote over on Greenlight, because there’s always room for another weird musical arcade shooter in the world.