Just when we thought they were done adding new fighters, Pokkén Tournament will be announcing the latest challenger soon. Much like the teaser image for Sceptile, there’s a new clue to help us speculate which Pokémon will be next. Our only clue is, again, a certain letter in the Pokémon’s name. A Pokémon with  ラ in its name will be revealed on January 15.

This time the list of potential fighters is a bit shorter but full of great choices. The list reaches over 100 Pokémon but some notable contenders appear. Raichu is on the list but it may be unlikely since there are actually two Pikachu fighters. Hitmonlee, Hitmonchan and Hitmontop would be excellent fits like we previously imagined. Heracross has awesome power as the strongest Bug-type and Sableye just has a cool appearance fit for this kind of game, plus they can both Mega Evolve. Rampardos has the highest Attack stat of all non-legendary Pokémon, so they could crush any opponent. Perhaps even a legendary like Reshiram could come to the game. For a full list of Pokémon, see the compilation put together by one fan.

There are currently 11 Pokémon listed as competitors (12 counting Mewtwo) and the official Pokkén Tournament site looks like it has room for a few more. We’ll bring you details on the newest fighter once it’s revealed. 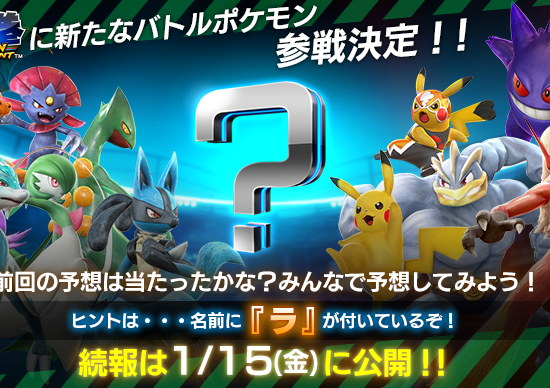