Besides creating games that have brought seemingly endless joy to gamers literally around the globe, Wargaming has done a lot of good for the world in general. Most notably they’ve restored and protected numerous tanks, planes and ships, many of which quite honestly wouldn’t be around without their efforts, as well as raised money for charitable causes. Yet more than just their philanthropy and historic preservation, they’ve also saved great game development studios that would have almost surely folded without their intervention. One of these is Day 1 Studios, which was at death’s door after the commercial failure of the (still) great F.E.A.R. 3 and subsequent Konami project cancellation. If not for Wargaming, the studio responsible for the classic MechAssault would be no more, and now they’re now developing what’s shaping up to be one of the biggest online PS4 games yet.

Although World of Tanks is smashingly popular in virtually every country, surpassing Call of Duty levels of fame in many, it’s never had the same ubiquitous fame in North America. Of course that’s selling it short as it’s an unqualified hit in our neck of the woods, but outside of its incredibly dedicated player base, it’s not a game that has permeated everyday culture (although most gamers are well aware of it, John and Mary Sue Not Gamers down the street have probably heard of Call of Duty, but not yet World of Tanks). Yet ever since the game was announced for PlayStation 4, it’s felt like that has been rapidly starting to happen. World of Tanks found more success in the mainstream with its recent release on both Xbox One and Xbox 360, but as successful as both consoles are, it’s impossible to deny the current popularity of the PlayStation 4. More than just the sheer install base, PlayStation fans have a hard-to-define passion for their brand that celebrates any franchise that comes to their platform of choice. As such, Wargaming’s decision to take a formerly Xbox console exclusive to a console that’s starved for online experiences has been universally welcomed among the fanbase. 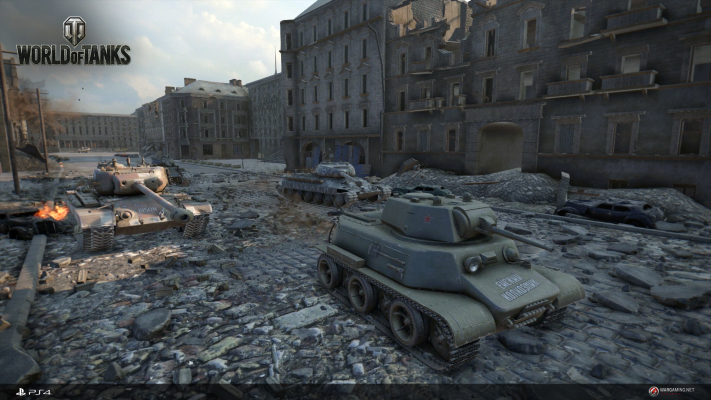 For good reason too, as this isn’t a simple port of the Xbox One version, but instead the same basic experience built almost from the ground up. We wanted to learn just exactly what was different in the PlayStation 4 version and what the process was like creating bringing a now five-year-old game on the latest hardware, so headed out to Wargaming Chicago-Baltimore (formerly Day 1 Studios) at their Chicago office to get the inside scoop from the development team themselves as we helped ourselves to copious amounts of PS4 hands-on time with the game.

There’s going to be 30 maps at launch with PS4 and over 140 tanks. That’s just at launch for a free-to-play game with seemingly endless legs, so know going in that this is one huge multiplayer game. Of course it has built on the PC version as well. A year ago, Wargaming Chicago-Baltimore released the first internally-designed map (Pacific Island), which was followed up the the hilarious (and also surprisingly fun, seriously try it if you haven’t) Holiday Toy Tank map later in the year. The granddaddy of them all, however, will be Scorpion Pass, a PS4 exclusive (likely timed) map that is the largest map (1.5  square km) in World of Tanks history. 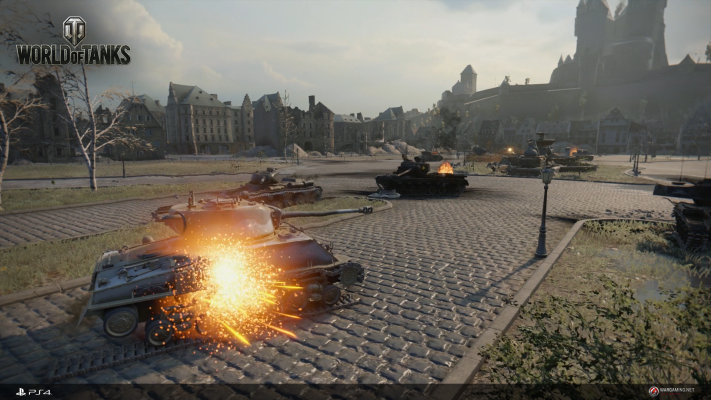 We were able to spend a lot of time in Scorpion Pass and it was impressive to say the least. Visually, like everything in the PS4 version, the textures are realistic and plentiful, but the highlight was just how fun the map itself is. There’s a nice level of verticality to the proceedings with plenty of cliffs and rivers found throughout the map. Combine that with a small lobby (such as 2v2) and it makes for an impressive layer of strategy where players slowly venture out tank tread by tank tread always trying not to be spotted whilst realizing they’ll have to find the enemy eventually. The formerly PC exclusive “clean” version of Ruinberg is also making its console debut on PS4 and is just as enjoyable as it was when it debuted a few years ago.

Designing these maps, however, is far from a random process. “There’s a process of saying ‘what do we need most.’ When we did Pacific Island, we thought ‘what could we do that’s never been seen before in World of Tanks,’ so we created a complete island,” explained senior game designer Chad Steingraber. “For Scorpion Pass, it just really started from the fact that we needed more desert maps. Now that we knew we wanted desert, we had to decide where we wanted to place the desert. So I looked at some various locations around the world that had tank battles in deserts and I focused on this one area that was cool and had an interesting backstory called ‘Halfaya Pass’ in Tunisia that was part of Operation Skorpion. There were so many dead tanks along that path that they called it ‘Death Ride.’ So the actual road path that you can see in the top-down map is embedded in the map, giving it a real world hook.” 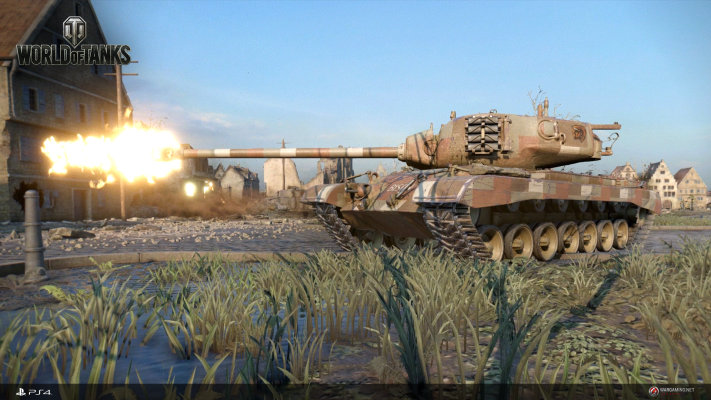 Once a great historical battle to work off of is selected, Wargaming then tries to push the limits. With Scorpion Pass, they wanted to go big or go home, so they did. The only problem was that the balancing became difficult because of having to adhere to the 15v15 format. “When you go from the lowest to the highest tier tanks, some of them are super slow,” said lead designer Jeff Gregg. “If you’re a T95 and your job is to defend the base or find the high ground and hide, we were worried that it would make it difficult. We were worried that people would find a perch and then not be able to do anything. So it was tricky to balance it out so that we had the sense of scale, but we got it right.”

What’s cool about this, however, is that when you play the different modes — Assault, Encounter and Standard Battle — it almost feels like you’re in a completely different map. The fighting takes place naturally in the area of the maps those set-ups are put in. Ironically, the biggest challenge in playing the map is simply exploring it. It takes a lot of runs to really figure out where the advantages lie just because there’s so much ground to cover. In a lot of World of Tanks maps, there’s large portions of the map that aren’t playable because they’re underwater or there’s a huge mountain. In addition to being the largest map yet by square footage, however, Scorpion is nearly 100% traversable. 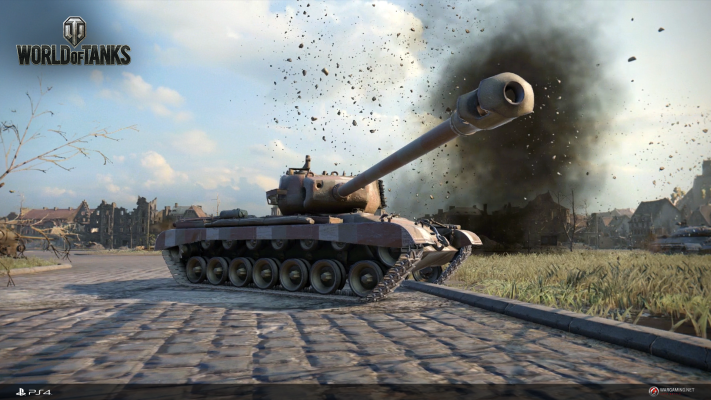 One of the biggest reservations many PS4 gamers might have before jumping into World of Tanks is that it seems like such a PC-centric experience. Don’t let that scare you, though, as many of its developers weren’t PC gamers either. “It doesn’t have a classic FPS methodology, being more methodical. Console players just like to get in there and blow $#!^ up. And that can work if you’re not expecting it, but that wouldn’t work in the PC realm. So it will be interesting to see how tactics evolve on consoles, if the community ethos changes due to the console.”

Of course it would also be natural to expect the game to seem like an Xbox One title — which would be jarring to PlayStation devotees — due to the fact that it was released mere months ago on Microsoft’s console, but that will not be the case. The sticks are different between both consoles — with different dead zones and an overall different feel — and this was taken into account when designing the game on PS4. Everything was re-tuned for the PlayStation hardware, even when it didn’t necessarily *need* to be. “First pass it worked, but it didn’t feel good,” said Gregg. “It’s physically different hardware. It has the TouchPad on top, the big touch button; you should adjust it for that piece of hardware.” Since the first beta, they’ve even received feedback from players on stick sensitivity and have already adjusted accordingly. Proving Wargaming’s attention to detail, even Party Chat as well as Remote Play on the PS Vita was considered. The touch pad will be used in place of some buttons to start with and if that doesn’t end up working, it will be evolved throughout the game’s run. 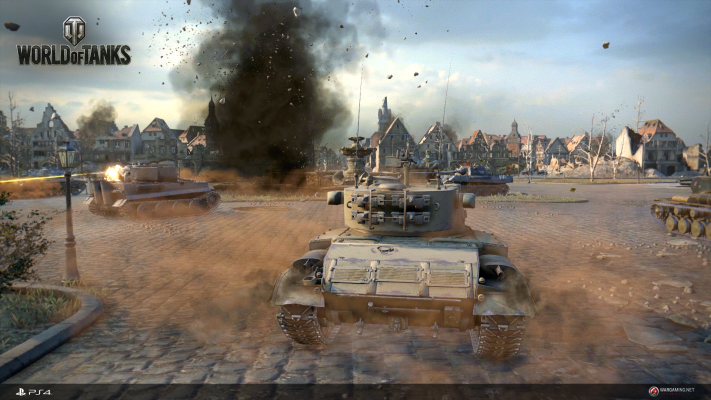 Tanks are in the air everywhere you look around. World of Tanks’ long-awaited debut on PS4 isn’t just a port, but a carefully-planned experience that harnesses everything the PS4 has to offer. There’s not a lot different versus the Xbox One version, but what is different is how the PS4 community has swiftly embraced it. World of Tanks is being talked about like never before in North America and those who have never played an online game, let alone World of Tanks, are flocking to it in droves. Wargaming could have simply threw the Xbox One version on the console and called it a day, but instead has been driven by an impressive amount of passion to make the experience as enjoyable as possible for PS4 fans. Immediately upon moving that first tread forward, it feels like it a brand new PS4 exclusive, which is an incredible accomplishment for a game that’s five years old. Time will ultimately tell the success of the PS4 version of the game, but Wargaming has done everything they can to make it a hit, and it truly seems like we’re at the precipice of a World of Tanks revolution.