It’s hard to believe that it has been eight years since the most recent Burnout entry. This series began on the PS2 as a stealth release from Acclaim, but a rental sold me on the series from the minute I started it up. There wasn’t anything like this on the market before as the goal wasn’t just to race into first place – but to do so while taking great risks. Initially, that just meant racing head-on into traffic and avoiding collisions. This built up your burnout meter and allowed you to boost, which led to a slick beeping in the soundtrack that added intensity to the events.

The sequel followed up on it with a lot more content and polish. The concept was expanded a bit with the new Crash mode that rewarded you for getting into gigantic set piece-worthy pileups. A Chase HQ-style Pursuit mode was also added to the equation to add some value for players. Xbox owners got a developer’s cut with even more content. The crash mode was expanded with more missions, while greatly-improved graphics and  the addition of new cars and skins made it a worthwhile purchase for owners of another version. 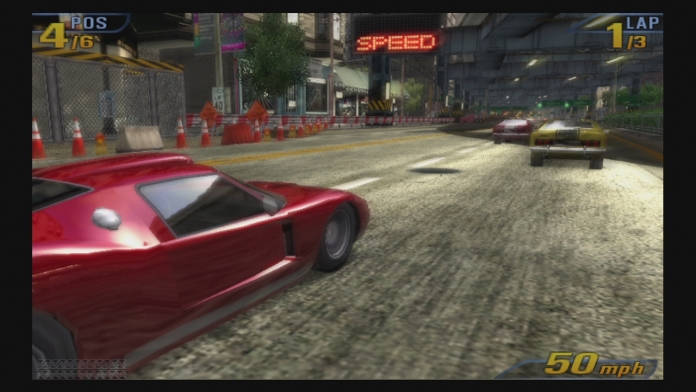 The death of Acclaim after Burnout 2 left the series in limbo, and it seemed like the franchise might wind up dying without a savior. Fortunately, EA came in and bought the rights to the series – saving it from certain doom. The move to EA increased the production values tenfold, which was both and good and bad thing. The first two games had original music, while this one relies on EA Trax – a series of “edgy” licensed music that gives off a hard rock vibe, but doesn’t evoke much excitement. Fortunately, the core game has been improved and fine-tuned to make up for any iffy soundtrack choices – and original Xbox owners can alter the soundtrack to suit their needs with whatever they have on their hard drive.

The Burnout series has been known for its takedowns, but they actually made their debut here – and are one of the franchise’s best and most endearing aspects. A taketown consists of essentially running an opponent off the road in some way, shape, or form. The easiest way to do them is with a healthy boost meter – so the original game’s setup of driving against traffic works well here too. If you build the meter up against traffic, you set yourself up to succeed by taking out rivals. The best thing is just how fleshed-out things feel even with this first attempt. You’ve got a basic against the rail takedown, as well as a ton of other options as well that pop up when you land them. Specialty takedowns are rarer, but more rewarding. 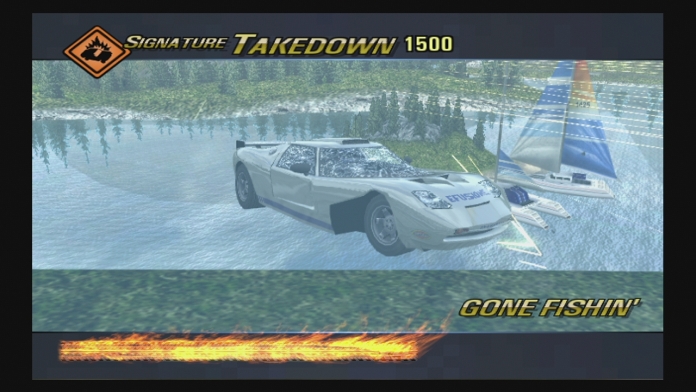 Ramming someone into an oncoming bus or car is thrilling, but a layer of comedy is added in when you send someone over the rain and into the water. The Gone Fishin’ subtitle for it also adds to things and gives you more of a reward. Nowadays, these would all just be achievements or trophies – but seeing a little screen pop up with the gallery viewable in a menu works just fine. One of the toughest to get due to the risk/reward factor is the pillar driller award since pillar-filled sections are tricky and you put yourself in great danger just going near them – let alone getting into back and forth exchanges there since you can easily be taken out there too.

Being taken out in this game isn’t the end of the world though, thanks to impact time. This post-crash window of time allows you to slow time with the A button (X on PlayStation 2) and move your car around. It works in every game mode, and for races and road rage events, enables you to score takedowns and either regain the lead or stand a better chance to win than you otherwise would have. Impact time won’t help you out all the time, but when it does, you’ll be thankful for it and it does change the game up in big ways when the stars align and you can take out a couple of rivals in one shot. 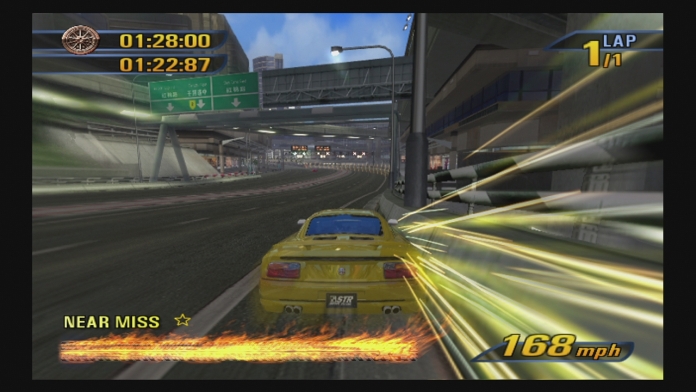 The racing modes are fairly diverse, with time trials, regular races, takedown target races, and  international challenges being given out from time to time. You’ll race in a variety of regions throughout the world, and see various cityscapes and environments. They have their own vibe to them even if the core content remains the same. Each vehicle type feels different, and there’s a sense of progression when you go from compact cars and work your way up to supercars. The car roster is entirely fictional, but largely inspired by real cars. You’ll see vehicles that evoke classics like the Ford Mustang, and even some classic cars from past Burnout games.

Despite time passing its graphics by in many regards, it does look pleasing to the eye. The car models are full of detail, as are the environments – even if the textures for roadside buildings are a bit rough. Burnout 3 still achieves greatness in terms of smooth gameplay, and there isn’t any slowdown even with tons of craziness on-screen. Crashes are violent and you’ll see sparks fly for not only cars scraping against each other, but extended grinds against railings too. The sound effect work is excellent too, and makes up for the iffy licensed soundtrack. Styker’s voice work as the DJ for Crash FM is solid, even if it isn’t all that memorable. 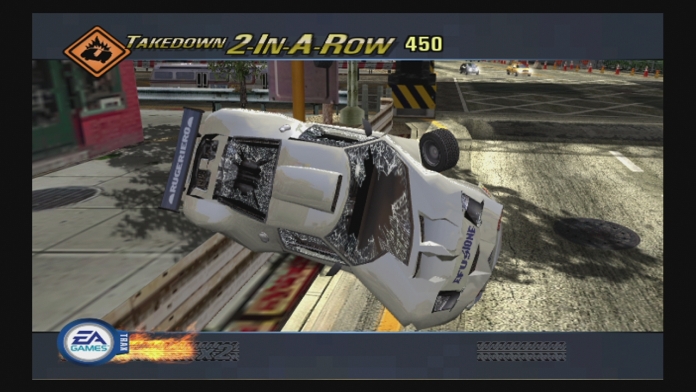 Burnout 3 remains a fantastic racing game and may be the best entry in the Burnout series. It was the game that turned the series from being a well-respected cult hit into one of the biggest racing franchises of its day. Replaying it made me hope that we see another game in it at some point in the future. Criterion has done a lot of great work since this series and a Burnout-style Need For Speed would be fantastic. Sure, Most Wanted’s reboot evoked a little bit of Burnout Paradise, but nothing has quite captured its greatness and a more action-focused racer like Burnout 3 or Revenge would be much-appreciated and at least pay homage to Burnout even if it was released with the Need For Speed branding.