Video game marketing is kind of broken. Think about the sheer number of games announced years in advance, only for trailer after trailer to hit with fanfare slowly dying out in between each new tidbit of information. No Man’s Sky. The Last Guardian. Doom. Oh and how could we forget the incredible tag team of Final Fantasy XV and Kingdom Hearts II?

After all, when so many games are being announced and released, there’s often not time to stop and wonder about a game whose development cycle has no end in sight. The intriguing online western role-playing game from Ubisoft’s Massive (with assistance from Ubisoft Reflections, Red Storm Entertainment and Ubisoft Annecy) falls in the same boat, announced way back in Summer 2013.

Becoming less hyped about The Division, however, would be a massive mistake. 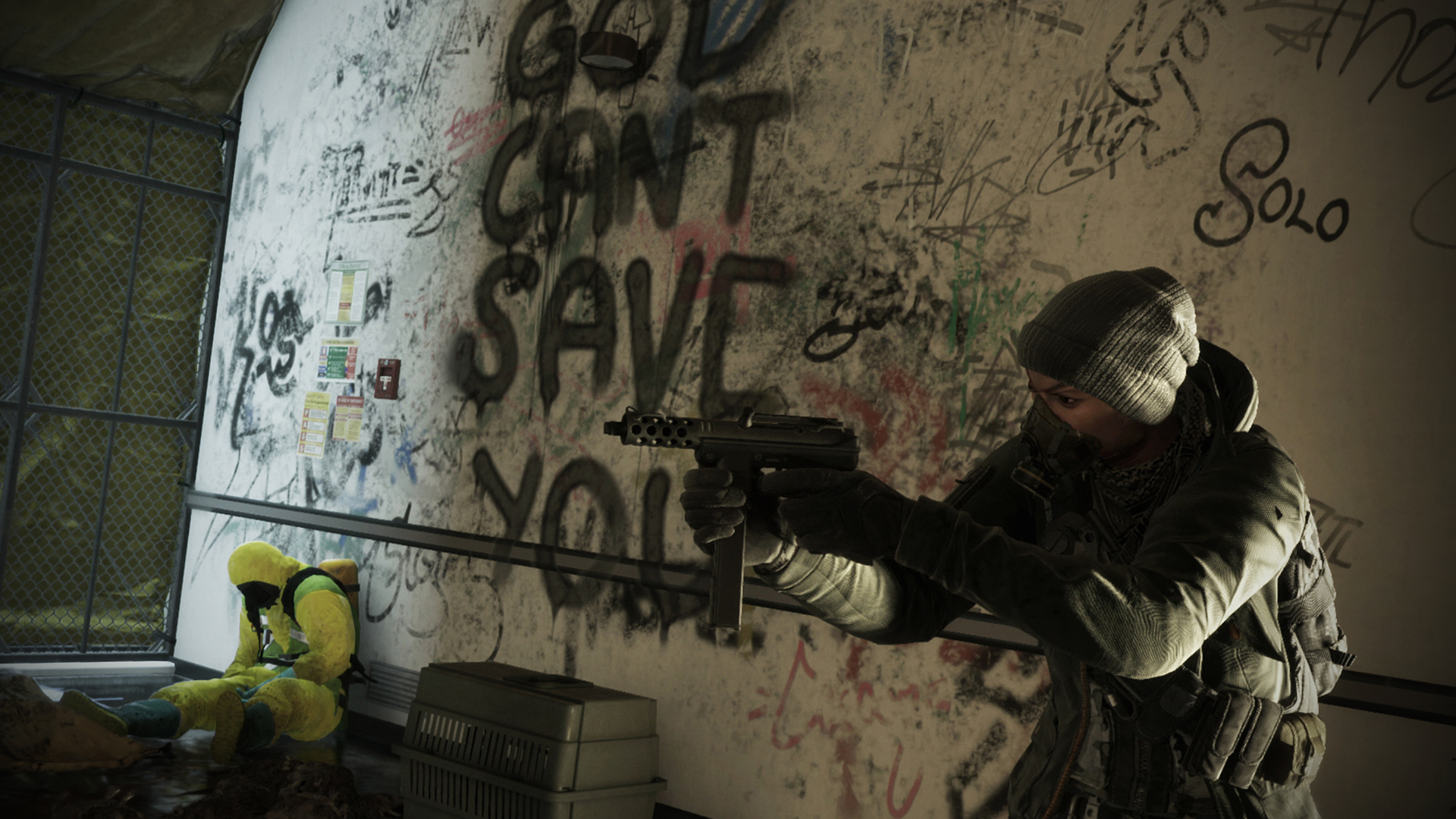 Before diving into the thought behind this statement, let’s break things down a little bit. I spent roughly four hours diving into The Division‘s gameplay mechanics, progression system, narrative premise, online features and potentially revolutionary multiplayer gameplay and came away with two major impressions. The first is that The Division is far more fun than any of its marketing has indicated. The core of a gripping game is definitely here, and if the remainder of its content proves to be entertaining, this could be a pretty special title. The second, and perhaps the more intriguing point lies within what The Division‘s biggest hook could do for the game design. The Dark Zone, a seamless in-world multiplayer arena where pretty much anything goes is the online equivalent of the Nemesis System, and it’s likely going to have more knockoffs than Rocksteady’s face-button combat mechanics.

Without turning this into an article that deems The Division the video game to end all video games forever and always, it’s worth noting that it could suffer the same issue that faced Destiny at its launch in September 2014. Vanilla Destiny was a title that had promise (and said promise was eventually realized with the release of The Taken King), but its launch was met with tepid reception thanks to a dedicated content problem. If The Division is going to wind up being the type of game that it has the chance to be, namely a great one, it will need to launch with a suitable amount of truly engaging, varied content. There’s a chance that the four hours of gameplay I experienced could be the best four hours of content available, with the rest simply being filler that feels too similar to that initial hook. This same logic can be extended to the upcoming Beta, which could, like Destiny, simply provide players with everything they need before the core game is later released. 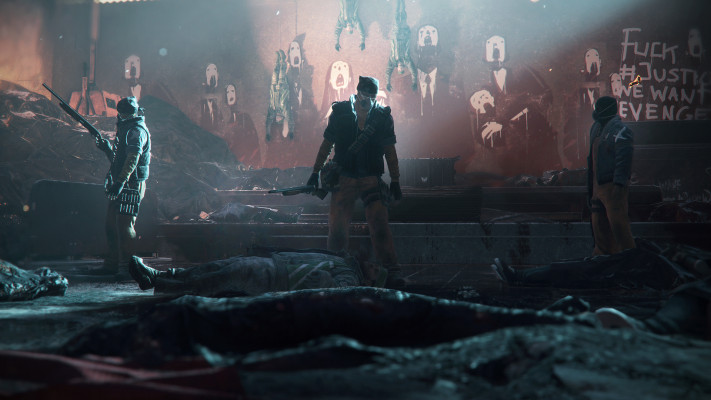 This is far more speculative than any preview has the right to be, though. After all, what we are looking at here is the tangible product that was actually playable, considering you can only judge something off of the evidence presented. Based off of that evidence, The Division is a dynamic, novel online role-playing experience that has a stronger core structure than Destiny, the game it is most often compared to.

There hasn’t been a shoot ‘n loot game in recent memory that gives you more freedom than The Division. Nowhere is this more evident than in its completely classless (no, not like that) character upgrade system. In short, any piece of loot you find can contribute to your character’s statistics, can be used by any character and can be switched out at any point in time. Whenever players hop into the in-game menu, they can respecialize their character at any time. This means that The Division‘s seamless matchmaking system is never undermined by the fact that a player could be ineffective on a given team because of a choice he or she made within the first five minutes. This is equivalent of Destiny allowing players to mix and match skills and gear currently reserved for Titans, Hunters and Warlocks with no restrictions.

Perhaps talking about the way class mechanics, or a lack thereof, work, it might be good to unpack exactly what The Division is.Also yes, I realize that explaining the title this entire preview is based upon doesn’t necessarily make for the most formulaic video game article. Taking place in a world where terrorists placed smallpox on money before circulating it on Black Friday in New York City, The Division tells the story of a, well, division of sleeper agents who are driven by their desire to better a post-apocalyptic society. In addition to the presence of crazed looters, the streets are riddled with heavily armed escaped convicts known, appropriately, as Rikers, as well as a mysterious group of flamethrower-wielding pyromaniacs known simply as Cleaners. This is perhaps the coolest version of the apocalypse that the game industry, which is comically obsessed with apocalyptic fiction at this point, has seen to date. 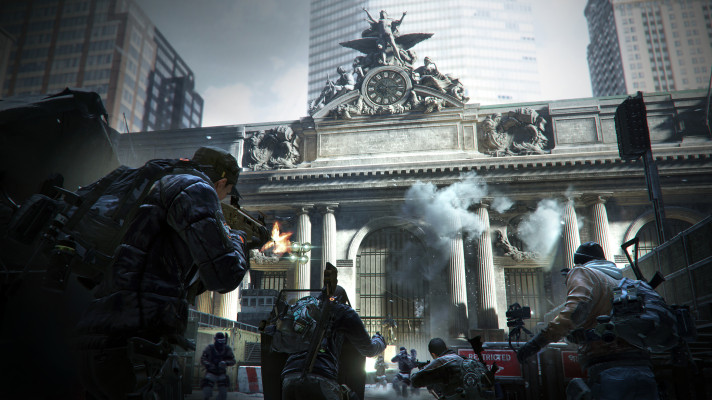 Combine this with a game that, content permitting, has all the makings of an addictive time-suck, and it’s not too hard to see why The Division is downright intriguing. Imagine a third-person, cover-based Destiny grounded in reality without all of the loading and menus taking up your precious gaming time. Oh and don’t forget to add in The Dark Zone, an area of the in-game world (it’s quite literally on your map) that you can walk over to in order to join a chaotic, tense part cooperative, part competitive multiplayer arena loaded with the best loot there is. The concept here can stand on its own, so it’s a bummer to retroactively look at the way The Division has been hyped thus far. After all, if the rest of the content’s quality matches what I experienced, this is going to wind up being a critical darling.

The Dark Zone is far sillier than any single bit of marketing indicated The Division could be and the entire game stands to benefit as a result. Players have the ability to go “rogue” and take out other player-controller characters in order to steal loot from them, only the rest of the Dark Zone players in the immediate area are going to know they did this. Add this to the fact that extracting loot from The Dark Zone involves calling in a helicopter that everyone in the area can see, and there’s an inherent tension that contrasts perfectly with the nonsense that you can pull in a sector with no morality. At this event, professional journalists started screaming across the room at each other in between bouts of laughter. Why? Simple: The Division has a multiplayer mode that feels inherently designed to promote fun. 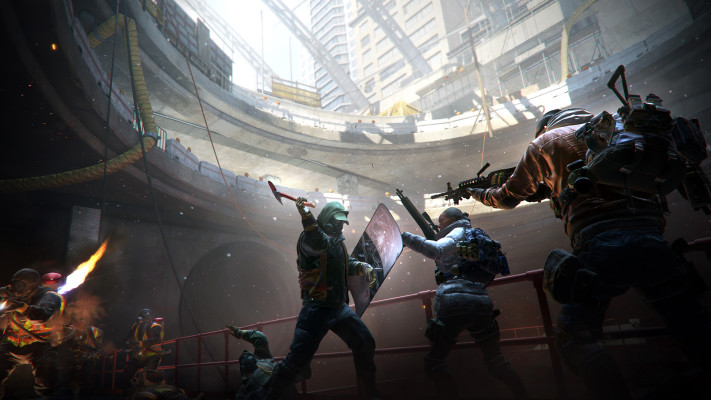 Maybe this surprising fact was caused the E3 presentation with the overly dramatic team chat dubbing, or perhaps it was Ubisoft’s relative silence over the back half of 2015. After all, there hasn’t been anything that we’ve seen up until now that suggests that The Division is going to be anything other than a deeply serious affair. Whether you’re doing jumping jacks on the corpses of dead players or simply making strange noises due to the tense chaos you’re immersing yourself in, this is not just a game where you’re going to be holding your hand over your mouth out of sheer shock. For a game to essentially become a platform, a la Destiny, players have to be able to run the gammut of emotions during the course of their play sessions. Think about it: you’re not always in the mood to watch a comedy, so sometimes you need to throw in a dumb action movie or drama. If a game is going to be the only thing that players play for a given period of time, it has to have the ability to capture the emotions that other games would cause a player to feel. If The Division was simply a serious apocalyptic story, we might get bored with it after a while. Because its narrative, deep mechanics and downright silly multiplayer mode all make us feel different emotions, The Division definitely scratches more itches than your standard video game.

This isn’t to say that everything was completely positive, though the positives outweigh the negatives here. The Division appeared to be running at thirty frames-per-second on Xbox One, and there were some fleeting moments of stuttering here and there. The real question about these occasional framerate dips will be whether or not Ubisoft’s public servers will be strong enough to prevent additional hitching. Oh, and if you’re wondering how The Division looks graphically on console, you might find yourself slightly disappointed. Make no mistake, the art direction here is top notch, as Ubisoft Massive and company have created a fascinating world, but this appears to be another example of a Ubisoft game that, perhaps, looked just a bit better in the trailers (if you catch my drift).

Even though there is a ton more we have to see from The Division in order to brand it a great video game, finding out that the core concept is so strong is a fantastic sign. Whether or not Ubisoft has a major online success on its hands is going to come down to whether there is enough quality content to sustain a player base. Still, after getting to experience everything from its loot mechanics to The Dark Zone, it’s clear that Ubisoft has something interesting on its hands. If we wind up getting a full-fledged phenomenon here, it’s possible we could look at Ubi in a totally different light.

For more on Tom Clancy’s The Division, be sure to read our interview with Ubisoft Massive’s Creative Director, Magnus Jansén.