When the going gets tough, the Crusader gets off, wildly swinging his broadsword in masochistic glee. Another member of the party is suddenly gripped with existential dread and is frozen with fear. The healer does her best until she falls victim, forever, to a combination of hysteria and slow-acting poison, and the mage casts her magic, but she’s in a poor position and falls victim to a barrage of arrows and a fear-indiced heart attack . And this ragtag quartet has only reached the third room of the dungeon. Now in final release after over a year in Early Access, Darkest Dungeon might just be one of the simplest yet simultaneously nuanced games you’ll play. Kudos to Red Hook Studios for layering their game with subtlety and depth in a way that isn’t opaque or confusing, instead being a great lesson on how to balance accessibility and complexity.

Darkest Dungeon is a roguelike, heavily invested in what have become the fundamental tenets of the genre: character permadeath and procedurally generated levels that are just as likely to present a major foe in the second room as the twentieth. If you’re wary of the genre, at least take heart that in Darkest Dungeon, the combat is thoughtful and turn-based and there is some chance that careful preparation and savvy character management will see you through.

First impressions are important, and thanks to its excellent voice over narration, evocative music, and dark, 2D gothic graphic novel art style Darkest Dungeon makes a great one, intriguing and grabbing the new player immediately. While the story is paper thin, it’s narrated with appropriate gravitas throughout, and that includes the ongoing narrative “color commentary” during the battles. After starting the game, it’s only a matter of moments before your four-member party is plunged into a dungeon crawl. 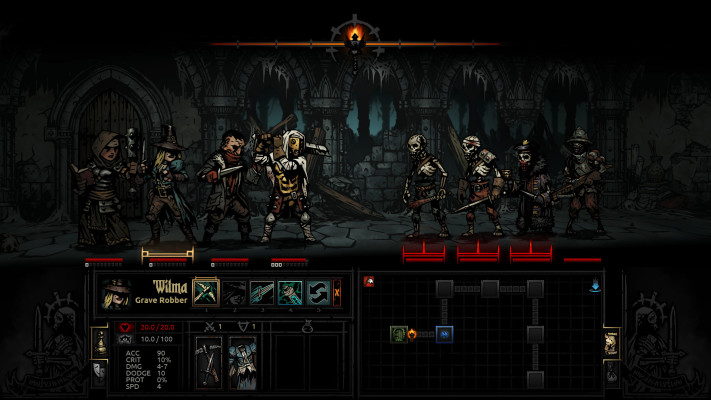 Turn-based enemy encounters are the main course in Darkest Dungeon, and they are in one sense, totally as expected, with each character electing to use his or her turn to fight, heal, or use healing or buffing items on themselves or the party. There are over 14 different classes of heroes and naturally they have unique skills and abilities to bring to the fight. Positioning in the lineup during combat is incredibly important and sometimes characters will relocate to the back of the party on their own to heal or be sheltered, or out of cowardice. Or, they might rush forward in a show of unwise bravado.

Darkest Dungeon calls the changing psychological states of the characters the Affliction System, based on the premise — and really, this is the biggest hook of the game — that the stress of exploring will impact the mental and emotional health of characters in many different ways. Some will see their comrades fall and be disheartened, while others will be inspired to fight harder. Some will call on God for help, and some will have a crisis of faith and lose the will to live. Some characters are masochists and love the pain of their wounds, other will be so frightened that they have a heart attack and die.

To some small extent, the player can mitigate the influence of these emotional states through spells, potions, and healing items, but a more effective strategy is taking a balanced group into battle. The party is assembled in town out of an ever-expanding roster of characters who arrive at the tavern on the stagecoach. After a few rounds, all the town’s healing and crafting opportunities are available. You can send the more zealous heros to heal at the church, or rest a more sexually deviant character at the town’s bordello. Each of the businesses can be extensively upgraded which in turn makes the heroes that much stronger and more capable. Like in X-Com, one becomes attached to heroes and tries hard to hold onto the most skilled ones, but there will come a time when they are lost in battle forever. Death in Darkest Dungeon is permanent.

The dungeons — each linked to a chapter of the game’s story — themselves are represented on the minimap as straight hallways and rooms, and each dungeon has several stages. Exploring each section of the dungeon reveals not only a plethora of enemy encounters but traps, chests, piles of books, and progress-blocking rubble. Sometimes an innocuous stack of dusty volumes will strike a member of the party with terror when the books are read. Having an adequate supply of consumables is critical. Shovels clear rubble out of the way, bandages can be used during battle, and of course, heroes have to eat to maintain their strength. 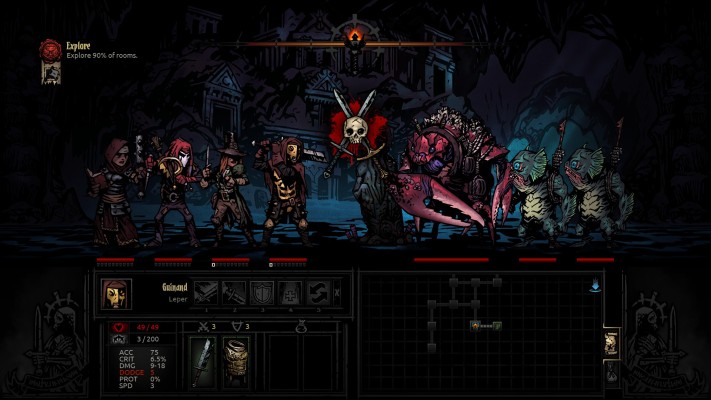 Darkest Dungeon is difficult, but not because its systems are unclear or unfair. In fact, the richness and complexity of its mechanics are miraculously transparent. What makes Darkest Dungeon challenging is balancing and equipping a party and the essentially unpredictable nature of the dungeons and combat. The art style — hand-drawn and evocative, with just enough effective animation to keep things interesting without adding overwhelm to the already busy nature of the action — is beautiful, and its music and stentorian narration are perfectly in sync with the characters. The whole enterprise is polished and a lot of fun.