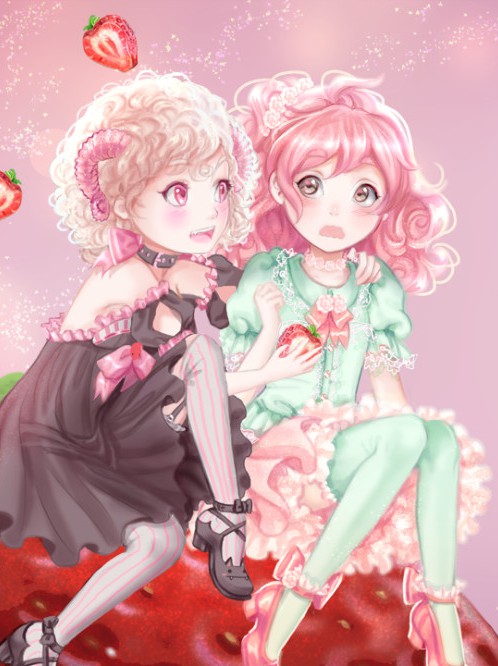 In most visual novels, players situate themselves into the shoes of a teenage or otherwise young adult male. Although not always the case, there are also many instances where we view and control potential romances from this same perspective. There’s nothing wrong with a game that takes this viewpoint, but the ubiquitous approach means that anytime a game does do something different it tends to stand out immediately. Such is the case for the most recent visual novel release from ebi-hime: Strawberry Vinegar. This latest yuri (girl’s love) title is not focused on a teenager and instead sets its sights on a nine year old named Rie. Already, this sets it apart from not only most visual novels, but most game stories in general.

Despite being quite young, Rie immediately proves herself to be an intelligent character. This intelligence seems to come with an aura of world weariness far beyond her years. Although she attends school as any other young child, Rie suggests she wants very little to do with anyone else. She’s apparently never had friends and is fine with these circumstances. That’s why she just doesn’t know how to react when, on a day of baking treats,  a strange young girl appears in her home. This weird child named Licia boldly proclaims that Rie must continue to feed her delicious food for a week or she will “reap her soul.” What?! Apparently, young Licia is not just a cutesy neighbor but one of the denizens of Hell who just turned up at this very doorstep. Rie normally would find such a claim utterly ridiculous, but the young woman actually has horns and a tail which makes it hard to deny it as the truth. Yep, things get weird almost immediately in Strawberry Vinegar.

As strange as the setup is, it’s also quite a cute one. Rie’s demeanor is slowly changed through the course of the game as the lively Licia influences her. With that said, for as much focus as there is on both characters being loud and lively, there is also quite the attention paid to two other characters: the parents of Rie. Very few visual novels (or games in general) ever really characterize parents of protagonist children. Most of the time they even write them off entirely for one reason or another. Not here. With Rie being just 9, it makes sense she is living at home and will need to interact with parents at least on some occasions. Here, the husband and wife become integral characters themselves. Both are also tremendously odd in their own ways, but I’m not about to spoil the specifics of their wonderfully unique relationship. 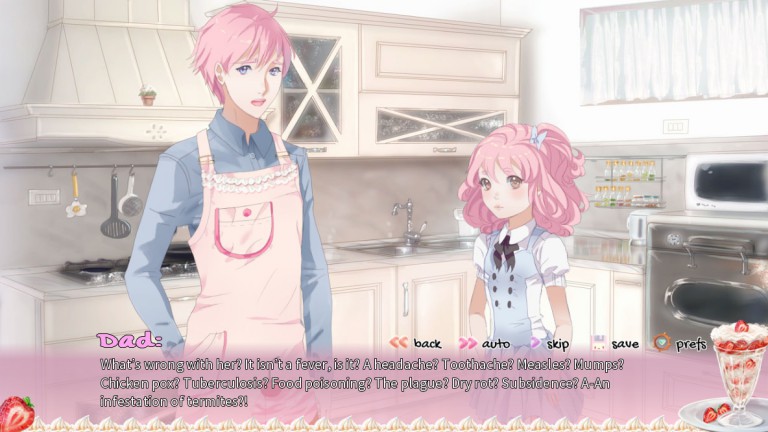 One aspect of Strawberry Vinegar which stands out right from the start is its artwork. There’s no doubt that ebi-hime picked the perfect artist, SillySelly, for this game. After already showing their artistic skill with both Asphyxia and The Sad Story of Emmeline Burns, the art has become a bit less impactful, but still looks fantastic. It’s not just the characters who look marvelous but the food as well. Oh, and the food is a necessary component of this game (if you couldn’t guess from the game’s title). Because Licia has demanded meals each day of her stay, players are regularly presented with delicious-looking dishes. Even if you’ve never eaten Japanese food before it’s likely that some of the illustrations will make your stomach growl.

Unlike most visual novels on Steam, there were actually very few typos to be found anywhere within Strawberry Vinegar. With that said, unlike genre contemporaries, something about the storyline and characters failed to click with me. The characters were adorable, the concept was fantastical, and writing proved humorous, but at no point did it ever really feel anything was “at stake” throughout. No matter what, it was easy to recognize Rie and Licia’s outlandish reactions to each other because they were so predictable. It did not feel like there was any discovery of characters going on as much as they were simply acting out their trope-y roles. With constant flare ups between them (none of which was particularly surprising) it felt a bit like sleepwalking through portions of the game. 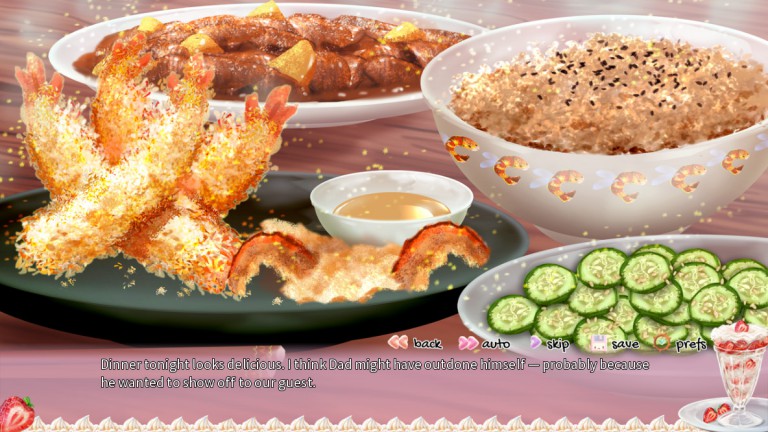 This is a tremendous shame, as Strawberry Vinegar was obviously something ebi-hime put a lot of care into. Not only does one playthrough last somewhere between four and five hours, but there are a total of six different endings to achieve. A variety of choices throughout the game seem to tweak affection levels between the two main girls and can lead to a variety of outcomes once Licia’s week with Rie finally ends. A total of 28 Steam achievements (alongside gorgeous unlockable CGs) also make the visual novel worth completing for those who end up enjoying their time with the world more than me. Features such as skippable text and multi-saves make it easy to do.

The only issue from an interface standpoint is that the white, thin text on a light pink and semi-transparent background can feel a little rough on eyes after a while. Some visual novels offer the option to change fonts or even transparency/color of backgrounds in order to resolve this potential issue. That’s not the case here. It’s also a bit of a shame that previously-selected choices are not highlighted upon future playthroughs. 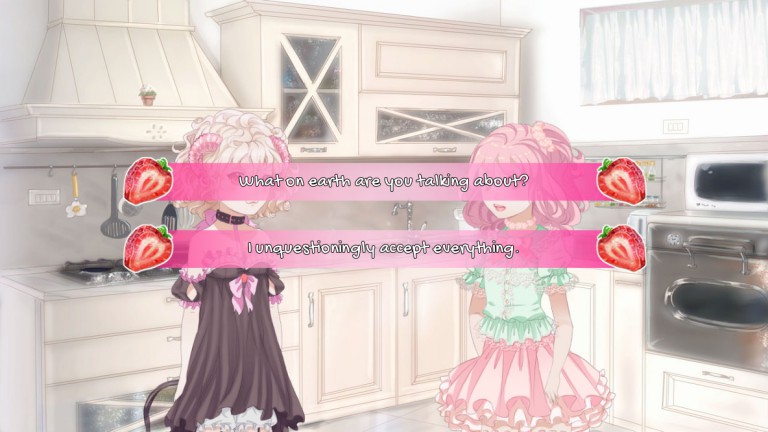 Thanks to the unique perspective and concept of the tale itself, the setup of Strawberry Vinegar leaves room for all sorts of potential. Then there are the oddball cast members which, if utilized better, could have helped to create something more memorable than what ultimately ended up being the case. Rather than ever becoming heartfelt or affecting, everyone is just this wild caricature which keeps any of the emotional turns from really mattering to players. There’s nothing wrong with a fluffy, simplistic story, but it’s a shame that it rarely manages to actually capture genuine interest because of how it plays so closely to trope conventions. Play the game through once, and if you feel differently, perhaps you’ll find other pathways to enjoy as well.