So, recently I became an owner of the iPhone 6s. Of the options for a true upgrade to my dying Android, it was actually the most economical. Anyways, I tend not to do much in the way of phone gaming (though there are a couple that will be tried.) However, I found myself in need of something to do and downloaded this week’s free App Store game, Lifeline… While I haven’t been able to finish it up, and thus don’t feel right posting a review, it should be noted that this one is worth a look.

This text based game centers around Taylor, a college student who was a passenger on a starship that just crashed on a desolate moon. (Gender is unconfirmed. Female seems the most likely, however.) Confused and scared, she reaches out to someone for help via her communicator. The only thing that is picking the signal is the player’s phone. So, she will speak, and her communicator converts her words to text. The game itself centers around helping her find a way out of this predicament. This equates to her describing what is happening and giving the player a couple of options that she is considering. The player chooses the best option and she proceeds. 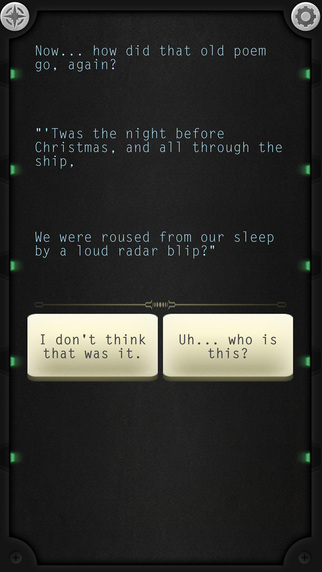 This all takes place in real time. For example, she might say that the wreckage of her ship looks to be about an hour away. Plan on not hearing from her for about that long. While there are so many games that use “wait to play” to gouge money from the audience, its use here is smart and adds to the immersion. It should be noted that there are zero microtransactions or any other nonsense like that.

Some of the choices also force the player to do some quick research. When she is bedding down, the choice is between trying to rest while exposed to the cold or sleep near the wrecked ship’s reactor, where it’s warmer. She can see from her suit that this is giving off about 150 rads, and asks the player to check if that is hazardous or not. Each of these decisions affects her attitude and the story in general. For me, she is currently well fed with a bad shoulder, lugging a generator across the barren moon to investigate a landmark that might lead to salvation.

Again, while there are no final verdicts being given here, iOS users would be remiss to to ignore what is turning out to be a gem. The developer, 3 Minute Games, LLC put together something really interesting here. Anyone who wants to check it out should look here.