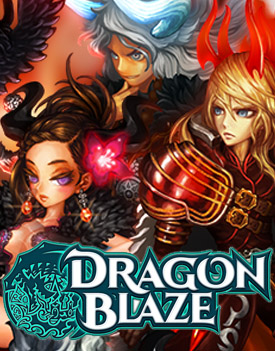 There are few games that can captivate attention such as Dragon Blaze and even fewer that are of the free-to-play model. It’s the only game in the last eight months, four times a day I’ve logged in, participated in the daily missions and collected the multitude of rewards. It’s exactly how games such as Destiny have been moving towards, trying to build a userbase that will continuously come back day in and day out, rewarding those who better connect with the community. Since its arrival in May, Gamevil has given Dragon Blaze tremendous support each month, wrapping things up on the second chapter over the last few weeks. While the story technically concluded (in an obvious cliffhanger) a few months ago, with the introduction of the additional difficulties, a new end-chapter Raid and some extra goodies, there has been a lot to do while waiting for the next major step.

Starting right from the beginning, the story brings players to a whole new realm that’s drastically different from what we’ve come to expect. The original events were far more loving, having a lot of colorful settings and although it dealt with themes such as corruption and murder, the second season is even darker. This introduces two sets of deities: the Quinque Draco and Septem Archangeli. They are the core portion of the story, although it does also deal with all your typical fantasy residents: high elves, orcs, demons, and dark elves, all struggling in their own ways. The story is pretty lackluster, but it’s too be expected for a game of this stature. There are a couple of scenes during the conclusion of most dungeon clusters, with maybe an event halfway through, but they aren’t anything meaningful and are generally just a quick exchange of words before the battle begins. Running into the same antagonists is also a common aspect to the story, which seems a bit odd considering a number of Archangeli seem to have taken a backseat. Finally, the twist at the end can be taken two ways: you won’t see it coming but there’s really no build up to it and actually takes away of a potential all-out-war that would be exciting to participate in. Regardless, don’t come into the second chapter expecting a grand storyline. It does establish some intriguing relationships between characters, but otherwise, it’s what has been added to the core gameplay that’s meaningful. 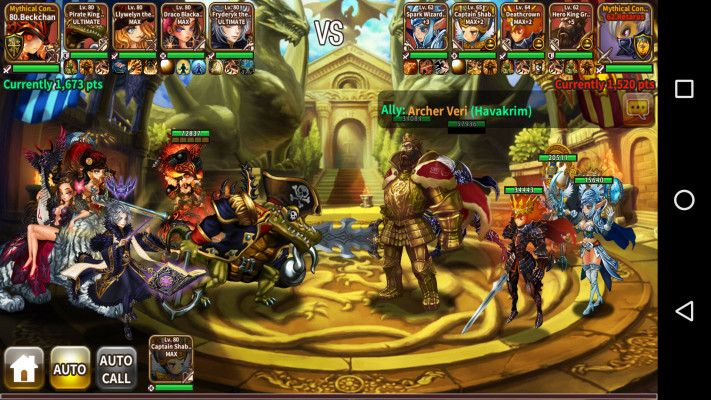 Talking about the characters that inhabit the story, the deities are the most important part to a number of updates, and they were broken up into a multi-tier launch. When Season 2 originally rolled out, the first five were released under the class of Draco, and then a couple months later, the Archangeli were released in three separate updates, diversifying the cast even further. There was no bad ally in the bunch, each drastically increasing the odds of players moving up in the leaderboards for the various modes. While some of the Archangeli did feel a little unnecessary in comparison to their Draco class counterparts, namely Farrah and Mikaela, they were still different enough to be solid entries. The only real issue is obtaining the correct characters to deify some of the more fascination characters, as there are very few Incanters, and even fewer Paladins. It’s all left up to the luck of the draw, although it does ensure that Ravengale (Incanter) and Kymael (Paladin) are more exotic.

It does take a fair amount of planning before deifying a character, though, because it involves sacrificing numerous allies (powerful and useless) to create someone who could potentially become a key part of your team. It’s not just about the stats as a fully supped up SSS character is still generally more powerful than their beginner grade deity, but it’s the various passive and active abilities that ensures they’re drastically more useful. For example, death plays a pivotal role with a number of these deities, with one putting up an invulnerable shield upon their demise, or another completely resurrecting a party. These extra skills create a more interesting twist on the complexity of combat, especially in PvP. The act of deifying someone can be a bit tricky, though, and requires a great deal of resources, not only playing the slots by combining various lesser ranked allies, but also sacrificing five powerful ones in the process. That’s not mentioning obtaining at least ten specific items that correspond with their deity through random boss drops, or buying them with the in-game currency (Rubies). It’s a huge investment in time to collect everything unless you’re willing to put down some cash or slowly grind Rubies. Originally, it was difficult to accomplish the process, but the drop rates and even microtransaction prices have been getting better over time. 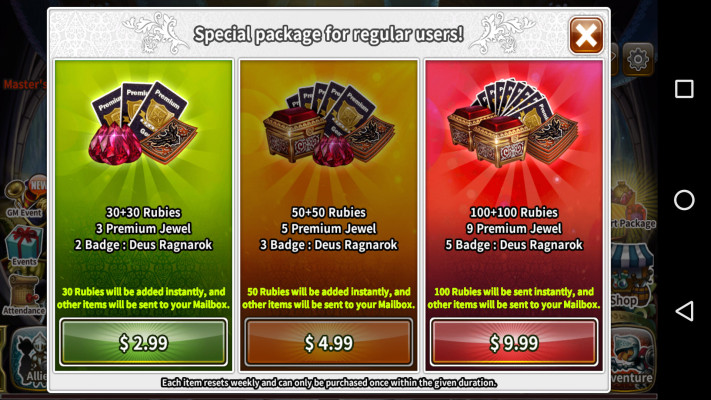 Speaking of the microtransactions, it’s almost impossible to miss them in a free-to-play game. One of the better aspects of Dragon Blaze is how few instances Gamevil shoves popups in your face. There are a couple ads before logging in, but there’s primarily only two adverts that occur randomly during your playthroughs, and they can be turned off daily. Unfortunately, the microtransactions can be a bit costly, even for a game such as this. Everything runs on rubies: summon tickets, jewel tickets, costumes, experience boosters, and so forth, and they are expensive. Summoning one ally will cost 30 rubies, which equates to successfully completing daily activities four times. Granted, there are a lot of ways to earn rubies and it’s not too difficult to see around 1000 a month if you participate in all the activities. The problem is the conversion rate: one ruby equates to roughly ten cents (US) when purchasing through the store. Gamevil does offer various bundles and “first-time purchase” rewards, which are reset at unknown dates, but it’s a very aggressive pricing strategy. In the time the game has launched, though, not only have special deals popped up, giving double the amount of rubies and extras, but a weekly set of bundles were implemented with a more reasonable pricing scheme. For the amount of content here, giving players the option to slightly boost their Rubies for ten to twenty dollars a month isn’t a bad deal.

One of the biggest and best enhancements to the Dragon Blaze formula is the introduction of Raid Essence. Before, players had to pray to the heavens they were lucky enough to get the gear they wanted, but now all they need to do is clear the raid a certain amount of times and they can simply buy it with yet another in-game currency. This is a fantastic addition that ensures players get something out of a raid when pulling a crummy piece of gear, even though it’s one-tenth or one-twentieth of a celebration. On the other side of the coin, it does feel like the drop rate for better gear has toned down significantly. In the early stages of Chapter 2, obtaining SS and even SSS items wasn’t all that difficult, but now it can be chore and most of the time easier to rely on building the essence to buy the equipment you want. The new raids themselves are a relatively well done, though. There are four, each being a puzzle to solve, with an extra one at the end of the Myth difficulty that features for the first time a six-man raid. This Deus Ragnarok is a delight in how it’s structured, handing out at least two of SS, SSS and Ultimate gear after completion. It is a bit easy to come out victorious, although it would be a bit unfair if it was overly difficult considering the process of obtaining a ticket to access the raid does require a fair amount of grinding.

In addition to the Raid essence, there were a couple of other elements added that help streamline the experience. The most notable is a set of three adorable pets that have a goal of keeping your inventories of items and allies clean. For example, one automatically enhances specific characters when obtaining C and B graded allies, and another instantly salvages useless equipment to ensure the newly added auto-retry system can go on for as long as possible. Unfortunately, while these are convenient systems, they come at a price. They cost 250 rubies each (roughly $25 if you’re buying rubies from the store), and they’re only available to you for 30 days. 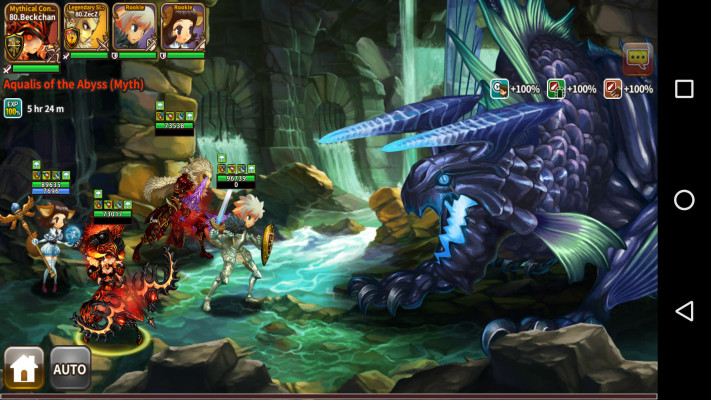 The first season of Dragon Blaze set the groundwork for a much larger universe. It featured an upbeat, colorful design, whereas the second season is more depressing. It also introduces deities, which make competing in the plentiful modes all the more satisfying. It’s a somewhat complicated system at first, not to mention requiring a great deal of resources, but the way reoccurring players are consistently supplied with allies and items ensures they’re making some progress. Unfortunately, the microtransaction format can be a bit aggressive, although deals on their in-game currency consistently go on sale and the newly-formed weekly bundles give even more options. The biggest challenge Gamevil has now is getting new players in. It seems increasingly difficult to progress and make a mark in the world as players need to trudge through the repetitive first chapter, which means repeating the same stages four times, then doing the same with the second season. Regardless, Dragon Blaze is overly addicting and highly entertaining. The frequency of support and content Gamevil has been updating players with only helps strengthen the experience. You’ll be hooked from day one.