While we’re all excited for the milestone anniversary of the Pokémon franchise, some stores just couldn’t contain their joy anymore. Many fans have reported seeing and even purchasing Pikachu and Mew plush dolls even though they are not scheduled to appear in stores until February.

With just a few days away, February is the month in which Pokémon celebrates its official 20 years as a video game series. It’s also the beginning of a year-long Legendary Pokémon distribution with Mew kicking it off. Each plush doll comes in a zipped up display box at around $16.99 as is seen in this fan photo.

This isn’t the first time we’ve seen a misunderstanding between Pokémon and GameStop. We ran into a bit of a snag with them in the past but this little issue happens to benefit fans instead of hindering them. Whatever is going on, it’s officially announced to start in February so many of us will have to wait just a bit longer. 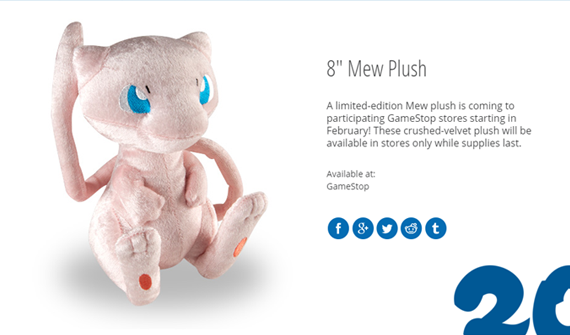